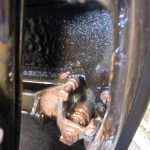 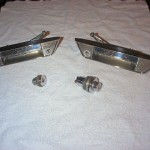 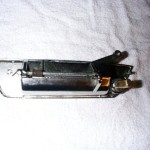 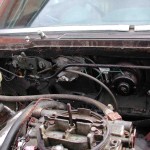 I received the following e-mail observation:

1. The bonnet cable operates the 2 latches which are connected be the rod in the picture.If the cable breaks you can open the bonnet by putting your arm up inside the engine bay from underneath and from the right hand (nearside) side of the car, and push the rod \\across. 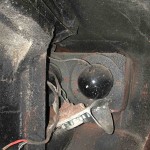 Photo – inside of front offside wing

I have also replaced the boot seal which I bought from Cropredy for £15.99 + vat. 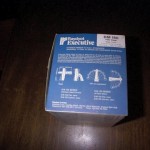 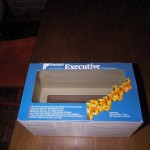 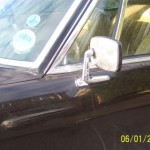 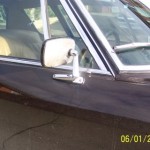 There wasn’t any rear view mirrors other than the interior one. I decided to fit door mirrors and Cropredy sold me the period aftermarket mirrors. Not until after buying two plain mirrors did I discover that you should have a plain on the drivers side so that you have undistorted vision in this, the overtaking, mirror and convex on the passenger side to allow a better, but less accurate view. 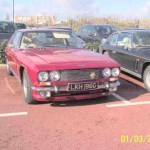 I asked the list about a front spoiler I had seen on a Mk 1 Interceptor at the Jensen Open day in Leicester England. A summary of the responses is:
1.We posted several pix of local spoilers (all on Mark IIIs) on our club website www.jentlefolk.com. Take a look at the page called “cars,cars,cars” for three examples. The one on the left (white car, bad picture I know) is mine. As the description says, it came from a Datsun 510 and bolts right on (it’s fibreglass). Now how many things are that simple on a Jensen? The picture you provided looks like the Martin Robey one which cost about 800 dollars. Mine cost 100 and can be removed when I stop liking it. I think that one requires some mods to the valance, no?
2. If you take a look at the San Diego Jensen web Site at www.bob@jentlefolk.com You will see three pictures of Interceptors with spoilers. One is a Martin Robey unit, and the other two are variations of modified Datsun spoilers.
3.I didn’t go to the event you described (or saw the car with spoiler), but I believe I know what you are talking about. The Mark IV Interceptor had them fitted – apparently they are good at keeping the front down when cruising at high speeds – and you can have them fitted fairly easily. I understand that the spoiler from a Rolls Royce Shadow is used as it’s the perfect shape and dimension. I know Cropredy can do this (sell house, wife kids first to raise the money) but pretty much any other Jensen bodyshop should be able to do this.
4.I didn’t notice the number plate, but there was a MK1 Int at Leicester with a small standard front spoiler. Quite a few MK1s had these, so you might want to try Cropredy or one of the second hand Jensen places. Its about three inches wide and the same length as the two openings beneath the bumper, slightly turned up at each end. Assuming this is the spoiler you want and you have no success you’d be welcome to measure my own as it would be quite easy to make. Come to that I could make a simple dimensioned sketch. It’s held in place by rivets.
5. I have a spare new Int I factory spec front spoiler. Note that the FF one is different!! Both run below the front valance from side to side and are as original attached with pop rivets. If you are thinking of pre-fab moulded scoops – these are not original and made for a few cars in the 1890s.
6. The ff spoiler is longer and slightly different in shape as the wings and lower valance on Interceptors and FFs are different
7. 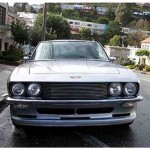 Here is a shot of a ’71 Jensen Interceptor with a S4 front spoiler that looks great. The pic. I sent you was of a local car (SF California) that I looked at but did not buy :(.The owner indicated he picked up the spoiler while travelling in the UK and it came of an S4 (late 80’s-early 90’s), it was NOS. Looked great! 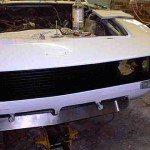 I made my own in stainless steel if it’s any help to you. See pic herewith.
9. The picture looks like the Martin Robey one, which was available for the 80s Interceptor. My reason for adding the spoiler was that I didn’t like seeing the front suspension bits below the bodywork on a front end view .
10. Thanks for the picture Bremar – not a standard spoiler at all. Perhaps the whole front valence has been replaced by fibreglass one?

The front spoiler on the car I saw appears to be the Martin Robey developed front valance. Talking to Martin Robe, they tell me the whole front steel valence on the car needs to be cut away and the new spoiler fitted. They had three in stock and are £259+ VAT. I will not be going down that route as my front valence is in good condition. 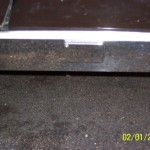 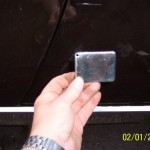 The stainless steel jacking point covers had effectively lost the rubber bungs that hold them in place ( either being rotted away or the nut and screw that squashes them had rusted through). I decided to drill a small hole in the s/s cover ,counter sink it and then (after drilling another small pilot hole in the sill cover) screwed it into place (with some silicon sealant round the circumfrence of the plate)

I wasn’t keen on the look of the number plate directly mounted to the bodywork. The Front numberplate is backed nicely by the chrome bumper. After failing to get a chrome one from the car shows I just happened to see a plastic chrome lookalike surround at Halfords for £6.00. The number plate had to have a very small amount ground of the crners but otherwise it fitted perfectly. 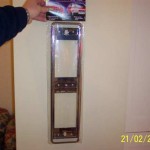 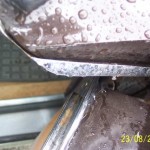 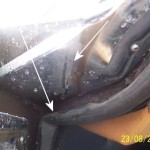 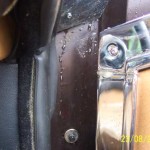 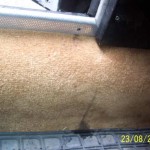