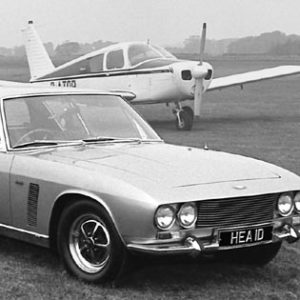 HEA 1D was the second Interceptor finished by Vignale, a couple of months after BEA 693C, in August 1966. This famous car, shown at the 1966 Motor Show, survives today. The Museum looks at the history that is held on HEA 1D so far, and hopes that further information on this historic vehicle might be found.

Jensen Motors sent out the experimental chassis, JM/EXP/115, to Turin in spring of 1966. Kevin Beattie and Mike Jones had travelled out to Vignale to road test and pick up the prototype Interceptor (BEA 693C) in June 1966. By which time, work to HEA 1D was proceeding well. So much so, that HEA 1D was ready for delivery by August of that year. To the viewers right is BEA 693C being made ready for Kevin Beattie and Mike Jones to try out. To the viewers left is probably HEA 1D progressing well with all the frontal body panels in place. Jensen FF chassis number 119/001 photographed in Turin during spring 1966. The photograph was taken by one of the Italian motoring magazines. Inadvertantly, Vignale had placed the HEA 1D plates on this car, instead of the correct HEA 4D plates.

With time of the essence, Jensen Motors decided to have HEA 1D air-freighted to England so it could be made ready for the forthcoming 1966 Earl’s Court Motor Show.

BEA 693C had already been at West Bromwich since June of that year, and there was plenty of time available for engineering to make sure the car was mechanically reliable. As such Jensen Motors were going to use BEA 693C as the testing car for motoring journalists at the Motor Show, while HEA 1D would be prepared ready for going on the actual Jensen Motors stand.

Back at West Bromwich, HEA 1D was allocated a production chassis number of 115/2495 (although the experimental chassis plates remained on the car). HEA 1D was registered for demonstration purposes on 10th September 1966. Publicity photograph of HEA 1D, taken by Michael Cooper in 1966. Interior photograph of HEA 1D, taken by Michael Cooper in 1966.

HEA 1D was required as a publicity vehicle as quickly as possible. As such, covering the period of the official announcement of the new Interceptor, HEA 1D was made ready to go on show at Follett. Meanwhile, the first Jensen FF, HEA 4D, was given over to Wilmslow Motors, for some showroom presence. Publicity photograph of HEA 1D taken by Michael Cooper in 1966. The location is presently unknown, but could be London or Guildford (Cooper often used Guildford as a photo-shoot location, as it wasn’t far from his home).

On 10th October 1966, Wyndham Powell, Sales Manager at Jensen Motors, drove HEA1 D down to Follett, arriving there late afternoon. Staff were waiting for Powell’s arrival, so they could get the car cleaned and into prime position within the small showroom as quickly as possible. There the car remained for the 11, 12, 13 October, with Richard Graves, Marketing Director at Jensen Motors, collecting the car on the Friday morning. Steve Forrest from Elstree Studios was interested to see the new Interceptor, so it was decided that Graves would pass by the Studios with HEA1 D and show Forrest the car. Afterwards, driving up to West Bromwich. Forrest was playing the part of John Mannering, the antiques dealer come secret agent in the series The Baron. Forrest was driving a CV8 MK.II in The Baron, and obviously had taken to the Jensen. If Graves’ visit in HEA 1D prompted a later sale of an Interceptor to Forrest isn’t known.

Back at West Bromwich, HEA 1D underwent a thorough clean and check over in readiness for being transported back down to London on the 18th October for the Earl’s Court Motor Show. HEA 1D was sharing the stand with the second Jensen FF, JEA 4D.

Both the first Interceptor, BEA 693C, and the first Jensen FF, HEA 4D, stood outside the Earl’s Court Motor Show, where motoring journalists were given the chance to try the new cars out.

After the Earl’s Court Motor Show, HEA 1D, was given on loan to Autocar magazine for an article in their magazine. The Autocar feature came out in their February 1967 issue.

A polite letter went out stating that while the car was being used as a demonstrator, they wished to keep the ‘HEA 1D’ registration on the car. The letter went on to say that they had no objection to him buying the registration number at the point when they disposed of the Interceptor. Gethin Bradley from Good Relations drives HEA 1D at speed. Photographer, Michael Cooper, lying in the ditch by the side of the corner takes this action shot. A part of the Michael Cooper archive. Photograph taken in 1967.

During 1967, HEA 1D was fitted with a tow bar attachment manufactured by Harben Limited. This was in advance of HEA 1D being used for Speed Caravan Towing at Silverstone. Jensen Motors had a history of being involved with Speed Caravan Towing, previously using a CV8. According to chassis file records, HEA 1D was being made ready for disposal in autumn 1967. A Mr P.A.B. Sheffield had agreed to buy the car for £2,950. However, within a week of agreeing to purchase the car, Sheffield pulled out.

Again, according to chassis file records, a new buyer was found very quickly, and by December 1967 HEA 1D was sold to Mr Anthony Williams, a solicitor from Old Hill, Staffordshire. Williams purchased HEA 1D for £3,100 (which included some rectification work), and by which time the mileage was showing 25,639.

Williams was no new-comer to the world of Jensen, having previously owned a CV8 (chassis number 104/2331). The CV8 was passed to his business partner, P.A.Tredrea around the time Williams was expecting his Interceptor. HEA 1D was registered by Williams under the business name, Snow Hill Hiring Company.

A document dated December 1969, shows Williams as still owning HEA 1D, and the mileage covered as being 58,284 miles. How much longer Williams kept the car isn’t known, but by 1971, Mr J.S.Baker from Avenue Road, Dorridge, Birmingham is shown as the registered keeper.  The last shown keeper  is keeper 4, the Ratcliffe Motor Co in Bournemouth. In addition, it would seem any repairs of the car did not take place at Jensen, since there isn’t any chassis file documentation to that affect. If the implication of “1st” means there was a subsequent crash also remains unknown at this stage.

The Index Card gives us an insight into further ownership of HEA 1D. The card states that a David Zadel from Bournemouth is the fourth owner, possibly purchasing the car from the Ratcliffe Motor Co. A fifth owner is shown as a Richard Thrift, also from Bournemouth. Then the sixth owner (possibly by 1979) a Brian William Roocroft, from Solihull, in the Midlands. Roocroft joined the Jensen Owners’ Club in 1979, with membership number 1947.

By the late 1970s, HEA 1D was suffering with rust issues to the bodywork. HEA 1D was given over to Jensen Parts & Service for a full bodywork restoration. Work took place in 1979, probably while the car was under the ownership of Roocroft. Although all the relevant documentation of the restoration is now missing from the car’s history file, it seems that during the restoration, the majority of the original Vignale panel work was cut off and changed for Jensen Motors pressings.

However, if indeed HEA 1D was written off for insurance purposes in 1971, it is quite reasonable to assume that whoever rebuilt the car at that time, used standard Jensen Motors pressings in any case. These pressings were probably changed yet again by Jensen Parts & Service

Today, we have to understand that Jensen Parts & Service Ltd were not doing anything incorrect, as far as they saw it. All Jensen cars coming into them would be subject to any upgrades they felt were necessary. Particularly in regard to parts which were no longer available for earlier cars. Certainly maintaining bodywork made and fitted by Vignale was not a part of their agenda. However, if indeed HEA 1D was written off in 1971, then Jensen Parts & Service were only changing like for like in any case.

After completion of the restoration work, HEA 1D was put into storage where it remained unused until 1989. Bryn Shaw, from Chistchurch in Dorset, acquired the car in late 1989 or early 1990. Now under the ownership of Shaw, HEA 1D was given back to Jensen Parts & Service. They undertook a re-commission, fitted a new bonnet, and gave the car a complete re-spray. It may have been at this time that a black vinyl roof was also fitted. The car was given an MOT certificate with the mileage showing as 64,954.

The new owners were the well known classic car dealers, the Old School Garage from Whaley Bridge, High Peak. HEA 1D was immediately marketed at £29,000. It took close on two years for the car to find a buyer, being transported across to Hamburg Germany for its new owner. Keeping HEA 1D for three years, the Hamburg-based owner, gave the car over to Grand Sports Cars in Hamburg, where the car was placed for sale at 55.900 Euro.

Jensen specialist, Andrew Cassar, from London, viewed the car in Hamburg, bought the car, and drove it back to the UK. Shortly afterwards, in March 2013, he placed HEA 1D for sale on ebay at £75,000. HEA 1D photographed with Turin University in the background. Photograph taken in 2017. HEA 1D photographed at speed on the outskirts of Turin in 2017.