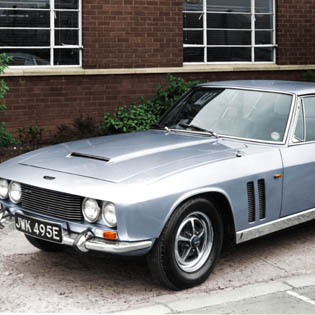 Jensen FF number ‘3’ had been designated for Harry Ferguson Research. The first two FFs had been kept back by Jensen Motors as development cars for evaluation. Both Major Rolt, and Sheldon couldn’t wait to get their hands on an FF themselves, so they could evaluate the car. Tony Sheldon, the Company’s Managing Director, came to the Jensen factory personally, to collect their new car. The Museum looks at the interesting history and tragic end of this important car.

119/003 was given a specification of crystal blue paint with black trim. The car was returned from Vignale to West Bromwich in April 1967. 119/003 was the first true production manufactured FF.

Politics in the car world made it necessary to re-number both of the first two cars as though they were production manufactured.  119/003 was classified as an ‘assembly line’ car. 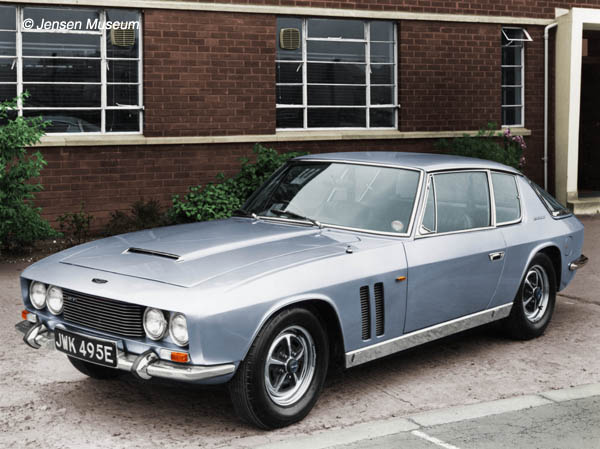 Once at West Bromwich, 119/003 was destined for Harry Ferguson research Ltd, they were eager to get their hands on an ‘FF’ for there own research, and future development of the ‘Ferguson Formula’ four-wheel-drive system. Tony Sheldon the Managing Director of Harry Ferguson Research Ltd, collected 119/003 personally from the Jensen factory in April 1967. 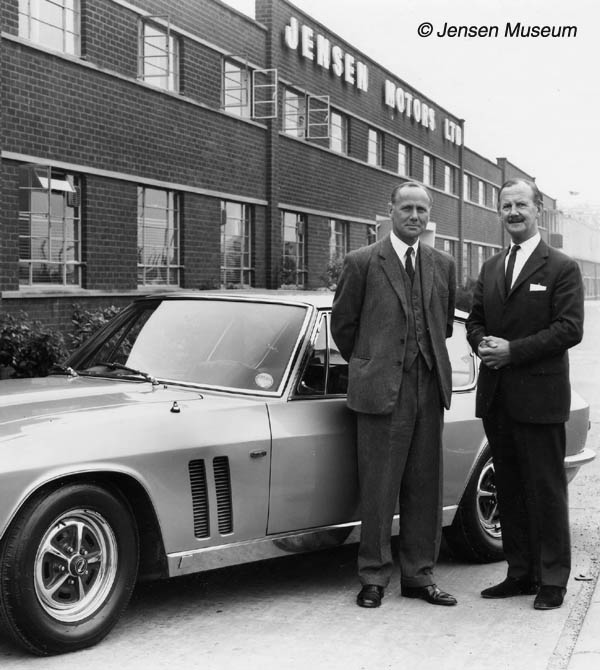 His Royal Highness, The Duke of Edinburgh, had personally taken an interest in the principle of a four-wheel-drive system for ordinary saloon cars. Through his contact with Rolt and Sheldon of Harry Ferguson Research Ltd, he was offered the chance to try out the new Jensen FF. 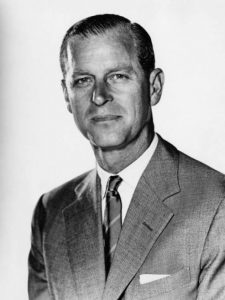 Sheldon arranged the loan of 119/003 to H.R.H The Duke of Edinburgh, which was quickly organised for May 1967, just a few weeks after they had taken delivery of the car. 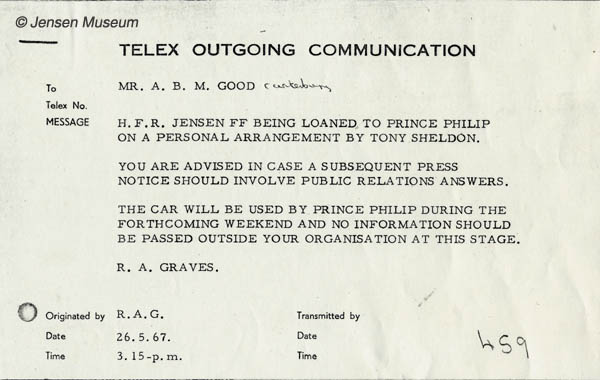 Telex from Jensen’s Marketing Director, Richard Graves, to Good Relations boss, Tony Good. The telex was advising Good of utmost secrecy abou the loan until after the event.

The loan was finally agreed for the last weekend of May and Jensen Motors were confidentially made aware of what was taking place.

H.R.H The Duke of Edinburgh confirmed to Museum curator, Ulric Woodhams, that he drove 119/003 around the Windsor area and was very impressed with the car.

The secret loan went without problems and at the end of the weekend 119/003 was given back to Harry Ferguson Research Ltd.

Karl Ludvigsen the well known American motoring journalist, had been in contact with Rolt from Harry Ferguson Research Ltd.

Having shown an interest in the Ferguson four-wheel-drive system, he approached Rolt about testing the Jensen FF. Ludvigsen arrived at the Coventry-based factory of H.F.R.Ltd on a damp and dreary April day during 1969.

119/003 was already parked outside the main building ready for him. The car was clean but a nasty scar running along the driver side was a reminder that 119/003 was often put through its paces during its ownership by Harry Ferguson Research. 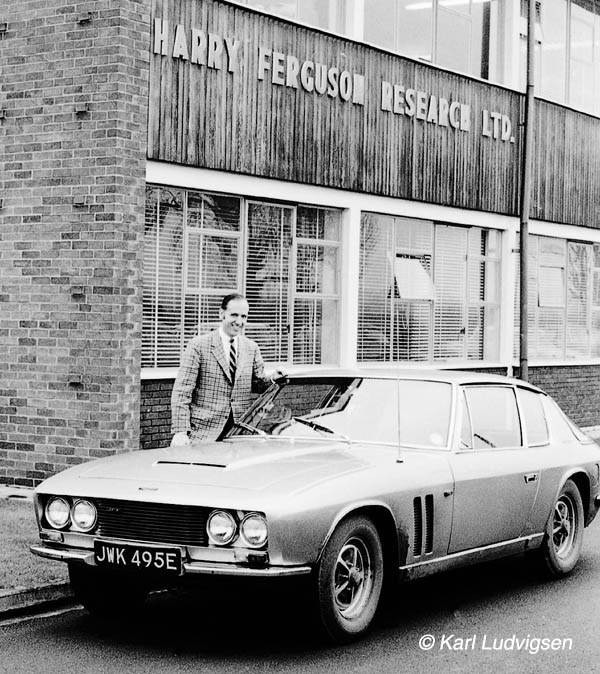 After an initial discussion with Rolt, Ludvigsen placed himself onto the large fluted black leather driving seat and familiarised himself with the controls. Rolt and a colleague climbed aboard ready for testing. 119/003 fired up instantly and Ludvigsen gently drove the car out of the H.F.R. complex.

Ludvigsen quickly gained confidence in 119/003 and proceeded to test its handling. In his own words, Ludvigsen stated,

“…..handling was breathtakingly good, I stuffed it harder and harder through a slippery S-bend, while my two Ferguson passengers gripped the grab handles. Under power the nose drifted out slightly, easily controlled and the sheer grip was excellent. After four tries I got near the cars limit, but only near it.” 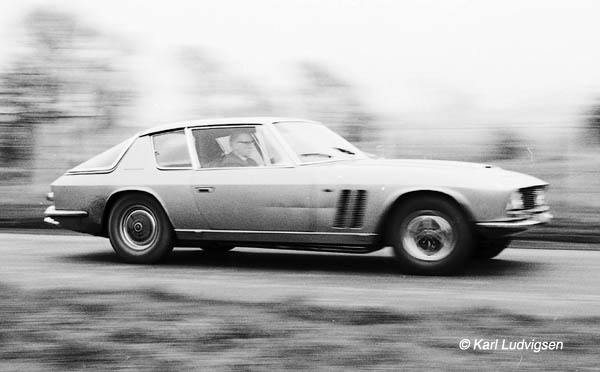 With testing at an end, Ludvigsen brought 119/003 back to a more sedate form of motoring and a while later the FF burbled through the gates of Harry Ferguson Research.

Immediately after leaving H.F.R., Ludvigsen made his characteristic notes about the test,

“JENSEN FF, very impressive car, cornering hard drifts out with very slight understeer, fully driveable, loses grip only at high lateral G. Acceleration with 2 wheels on loose surface brings maxaret into play fast & effectively, no pull or locking. Maxaret is rather deliberate on damp road with strong pedal pushback, not a pleasant feeling, but does “pump” brakes and control de-acceleration very well. General feeling of acceleration grip on damp roads etc is magnificent. Has power/lok diff to rear only. With one control unit car prevents rear wheel spin & front wheel locking.  Can get front wheel split on an upgrade = perhaps a rare condition, not worth the extra cost ? Can control rear wheel locking with anti-lock braking.”

Once back in America, Ludvigsen committed his experiences of driving the FF to a magazine article. The completed article appeared in the July 1969 issue of Motor Trend magazine.

119/003 continued in use as a demonstration and publicity vehicle, while routine servicing was undertaken at Jensen Motors. By March 1971 the car was back to Jensen Motors, for servicing and eradicating various faults, the mileage covered by 119/003 at this time was 42,216. 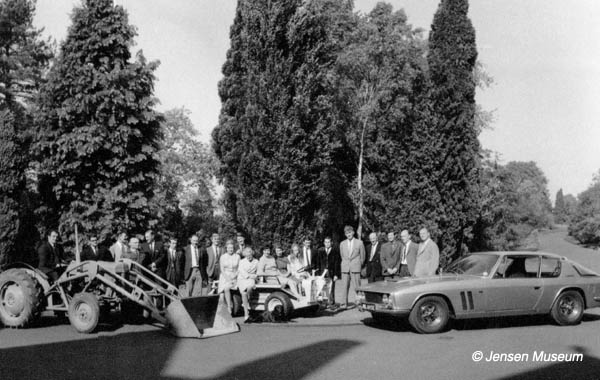 Publicity photograph taken at Abbottswood in the late 1960s. Jensen FF 119/003 together with a Ferguson tractor.

The year was 1983, and Jensen specialist, Tom Scullane, was told about an early FF for sale in Sheffield. Apparently the car was in poor condition and to be sold off for spares or rebuild; Scullane telephoned the buyer.

Scullane was excited to learn that the FF in question was non other than chassis number 119/003, which he knew was the first true production FF, originally owned by Harry Ferguson Research.  Moments later he was devastated to learn that the owner, fed up with the rusty 119/003 hanging around him, and needing the space desperately, dismantled the car for useful and saleable spares. The remains, including the chassis, were unceremoniously cut up and scrapped.

Albeit indigestible, the fact of 119 / 003’s untimely demise had to be accepted. An appointment was made with the Sheffield ‘butcher’. Two days later Scullane was waiting as the doors were opened to a lock up garage to view the parts.

Scullane agreed to buy all the parts from the car, had them loaded into his vehicle and headed back to Surrey. 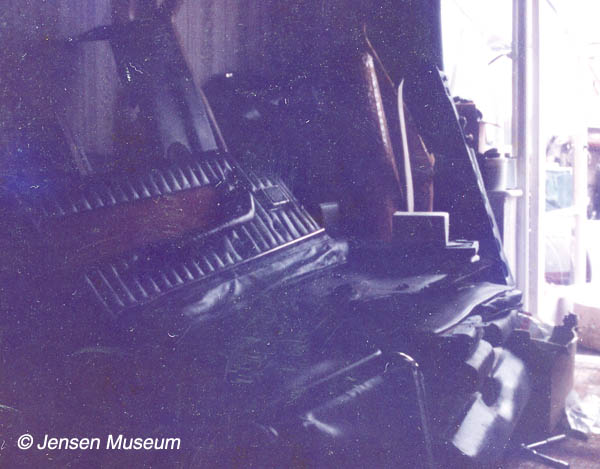 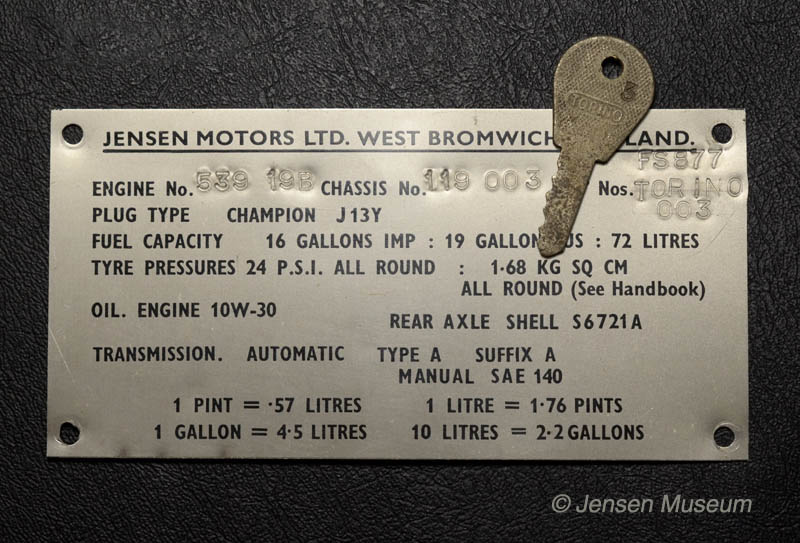 Over the years all the remaining parts from 119 / 003 were sold on, with the black interior eventually being fitted into Jensen FF 119/015. It was a sad end to a historic car.

COPYRIGHTS: All images and text copyright of The Jensen Museum | Karl Ludvigsen