Monteverdi, took over his father’s garage repair shop, with the idea of developing it further, and becoming involved in the world of motor racing.

In 1951, Monteverdi created a ‘special’ open two seater based on Fiat components, (now in the Monteverdi Museum). Later he raced a BMW, which he even used on the Nurburgring.

Besotted by Ferraris, Monteverdi went on to race a Testa Rossa and a four-cylinder Monza, mainly in hillclimb events, with varying degrees of success between 1956 and 1959.

He even built a special body on a Monza chassis in 1958 — a coupe with ‘gullwing’ doors. Monteverdi’s interest in Ferraris, had led him to gain a Ferrari distributorship in Switzerland.

A new building was opened in 1961, Garage Automobile Monteverdi, at Oberwilestrasses 20, Binningen-Basel, and sales of Ferrari cars seemed stable.

However, in 1963, the relationship with Ferrari came to an end.

Typically uncompromising, Enzo Ferrari had stipulated that distributors such as Monteverdi would need to forward buy 100 cars. Monteverdi, suitably outraged at the request, refused and that was the end of his Ferrari distribution.

Monteverdi looked around for other distribution possibilities, and managed to get agencies to sell BMW and Lancia, Bentley, and Rolls Royce. One other small British company had intrigued him; Jensen Motors.

When Monteverdi contacted the Jensen brothers in 1963, asking if he could be the Company’s Swiss distributor of Jensen cars, they must have been delighted. Up to then, Jensen Motors did not have a presence in Switzerland, and were still considered (rightly) a very small scale producer.

The first CV8 destined for the new Monteverdi distributorship, was a left-hand-drive CV8 MK.II, chassis number 106/2132. The car, finished in regal red and with beige trim, was ready in early 1964. 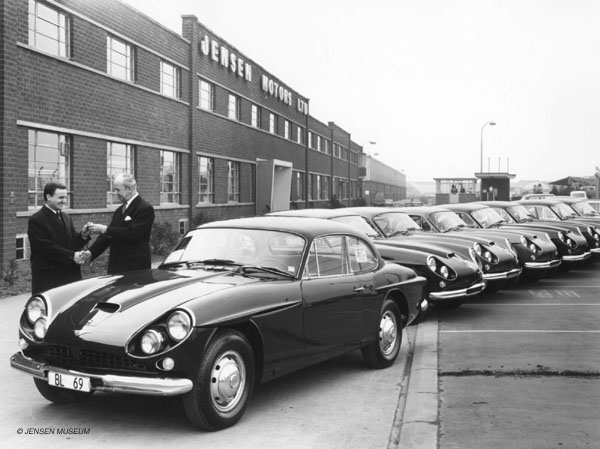 Monteverdi takes the keys to his new CV8 from Alan Jensen.

Monteverdi came over to West Bromwich to collect the car in person, accepting the keys from Alan Jensen. The car, with Monteverdi’s Swiss registration number ‘BL 69’ already in place, was air-freighted to Switzerland and made ready for Monteverdi’s stand at the Geneva Motor Show in March. 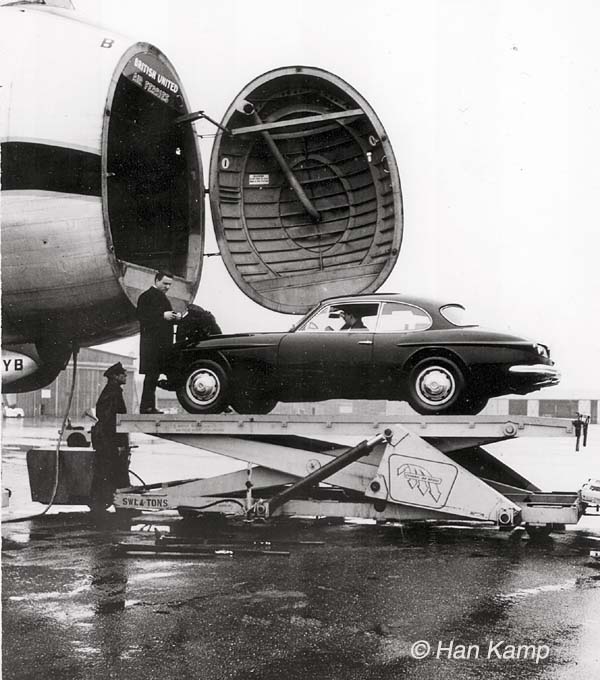 Monteverdi checks everthing is okay, as his CV8 is loaded aboard the plane destined for Switzerland.

Directly afterwards, the car was used both as a demonstrator car, and also as Monteverdi’s personal transport. 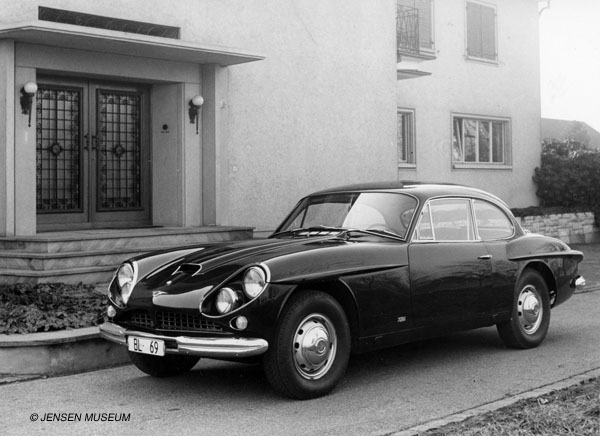 Monteverdi’s first CV8, 106/3132, photographed in Switzerland outside his appartment. Note his small distributor logo to the lower front wing. 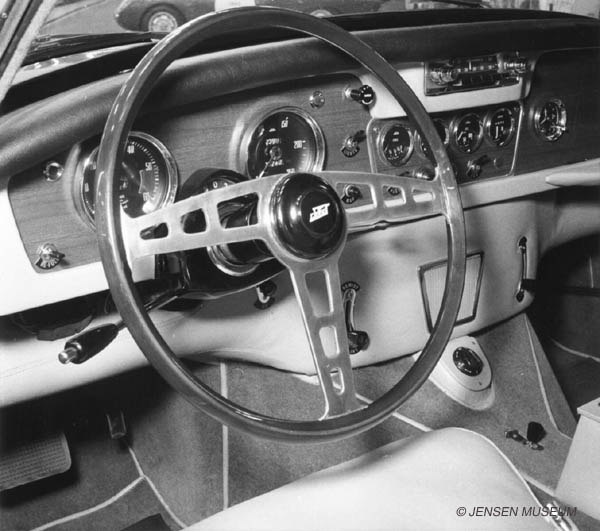 This was the first time Monterverdi had come foot-to-pedal with huge American V8 power in a British package. This concept quickly cemented an idea of Monterverdi producing his own Swiss manufactured supercar, using large powered American V8 engines.The idea certainly arose from driving his Jensen CV8, and understanding the Ferrari levels of power from big uncomplicated American engines.

An order for three further left-hand-drive CV8s was given to Jensen Motors, but sales were slow. One car, chassis number 113/2131 was sold in 1964 to a Dr Frank Gafner of Leistal, (near Basle). Another, 106/2145, was sold to a Herr Loeliger from Riehen, near Basel. Loeliger would also buy an Interceptor in 1967.

But seemingly not a lot else happened. Monteverdi’s original CV8 106/2132 was exhibited at the 1964 Geneva Motor Show, but eventually returned to Jensen Motors in December 1964, where it was converted to RHD. After being re-numbered 104/2132, the car was sold in February 1965. Another CV8, 106/2165 was also returned and converted to right-hand-drive before being sold on by Jensen Motors.

The Jensen brothers must have been under-whelmed by their choice of new Swiss distributor. By the time Monteverdi had put his energy into producing his own car in 1965, the Swiss Jensen distribution was in name only.

Incredibly, when the new Italian styled Jensen Interceptor came out in 1966, Monteverdi was not involved. Presumably by then he was completely absorbed in getting his own ‘Monteverdi’ cars, finished and ready for market.

There is no doubt that driving the CV8 around, was when Monteverdi first took on board the idea of building his own GT with American V8 power. The power advantages of the big lazy American V8 were obvious, and in terms of brake-horse power, the Jensen and Ferraris of the day were almost on par.

For Monteverdi, the only issue with the Jensen was in the styling. It lacked the beautiful Italian styling. This then, was the germ of an idea that came to Monteverdi. Use the same lavish American power units, but ensconced in his own Italian styled body. A dramatic Italian looking supercar bearing his own name.

By 1965, Monteverdi was already putting in the groundwork for his own car. The Italian Carrozzeria Frua, were contacted, and a short while later submitted designs for his approval. The prototype car was unveiled at the Frankfurt Motor Show of 1967. 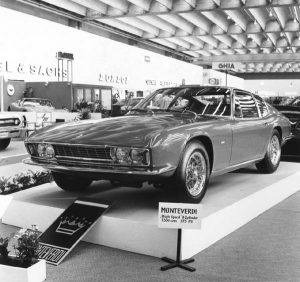 The new Monteverdi launched at the 1967 Frankfurt Motor Show. 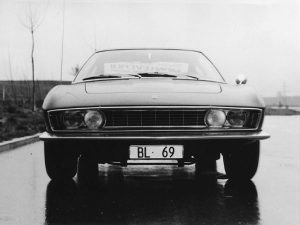 During 1968, Swiss-based car distributor, Edgar Schwynn, had written to Jensen Motors several times. He was inquiring to see if they would be interested in having him as the Swiss Jensen distributor. Former Sales Manager, Tony Marshall, takes up the story,

“Several letters had come through from this chap Edgar Schwynn, but we hadn’t got around to replying to him. By the beginning of 1969, we were preparing for the Geneva Motor Show. We hadn’t had a stand there before, although Sincar had previously had a stand with an Interceptor on in 1967 [ this may have been the Interceptor sold to Loeliger ].

During a discussion between myself and Carl Duerr, I raised the point about the letters from Edgar Schwynn.  Duerr asked me to give him a call before we left for Geneva, to say we would be delighted to meet up with him during the time we were at the show. So, that’s what happened, Duerr and myself met with Edgar, we both took to him, and we agreed in principle that he could become our Swiss distributor.

Edgar Schwynn was a completely different personality to Peter Monteverdi. He [ Monteverdi ] had always been a rather difficult distributor, known for his mood swings and uncompromising nature. Schwynn, meanwhile, was the exact opposite, stable and easy to get on with. That said, everybody remained affable. There was certainly no ill feeling on Monteverdi’s part when Schwynn became the distributor for Switzerland. It was obvious he had moved on, and was concentrating on cars bearing his name.”

The new Swiss distributor would remain loyal to the Jensen brand, still driving a Jensen years after Jensen Motors had collapsed.