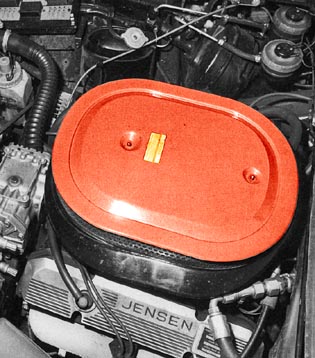 The quest for originality can be demanding, particularly when correct detail is important. One feature of a Jensen which takes time and expertise to get just right, is the engine-bay.

Many decades have elapsed since the cars were first built, and in that time all manner of detail may have been changed.  The Museum looks at the detail of a Jensen SP engine-bay.

The Jensen SP was simply a modification of a standard Jensen MK.III, so the engine-bay lay out is generally the same. The obvious difference being the iconic Six Pack carburettor system, with the Six Pack specific air-can with filter.

There were, of course, less obvious differences. These included ribbed exhaust manifolds , and slightly changed lower inlets to the radiator.

Although both the engine and transmission look the same as any other Chrysler 440 engine and Torqueflite transmission, internally they were different. Both units having strengthened internals to endure race work.

For the purposes of this feature, we are concentrating on the external differences, visual within the engine-bay. 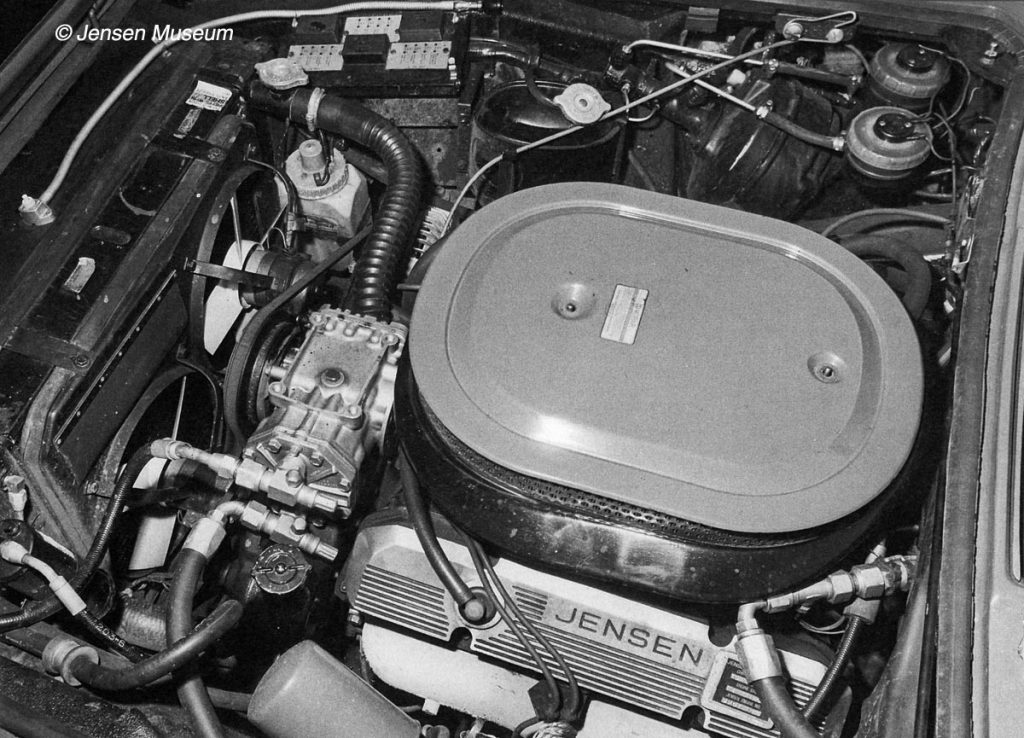 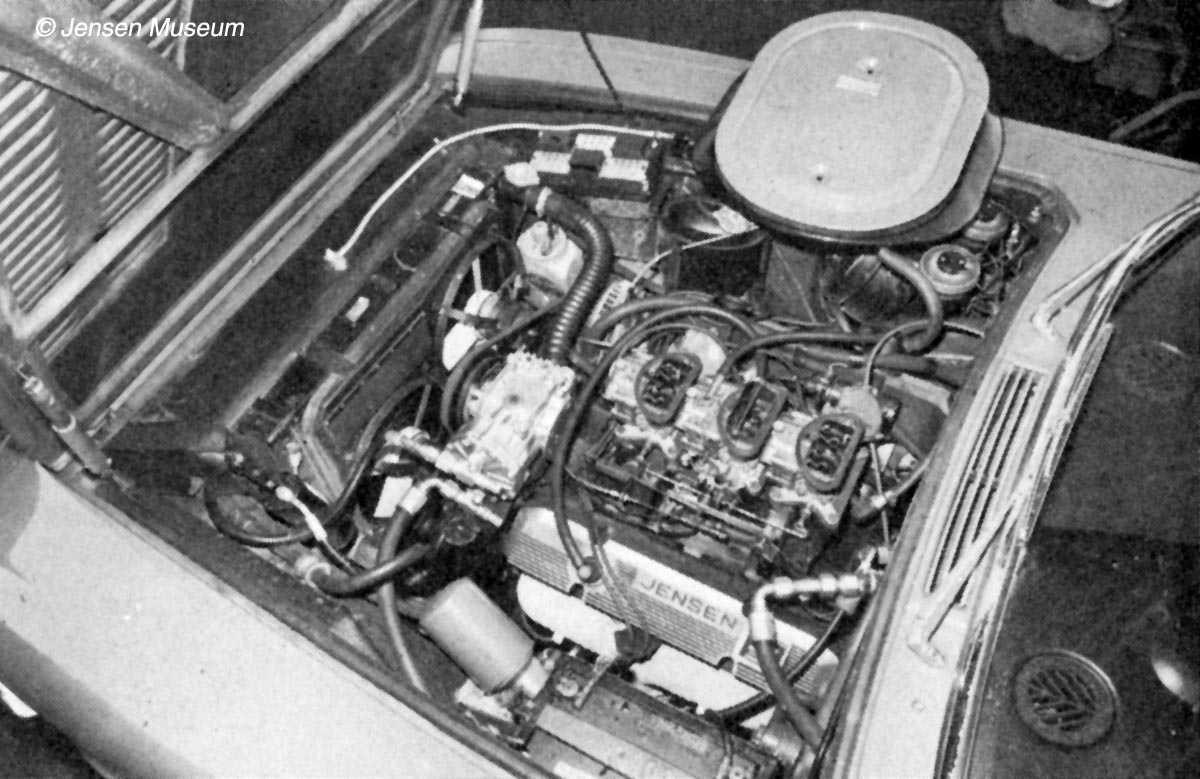 Jensen SP 131/4254. The first production Jensen SP, with six-pack air-can and filter removed. The coil is mounted to the rear of the driver-side inlet manifold on the SP.

A complete Jensen SP carburettor and inlet manifold set-up, with original specification air-can and filter.  This unit was removed from a Jensen SP during the 1980s and left in storage. The set was acquired for the Jensen Museum collection in 2018. 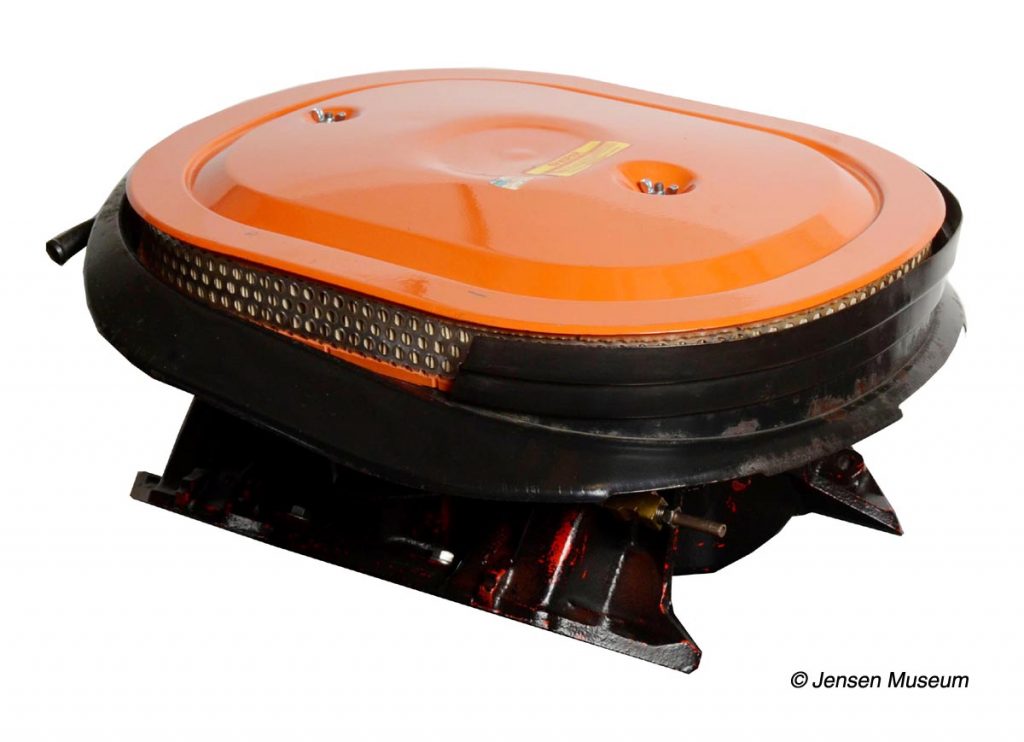 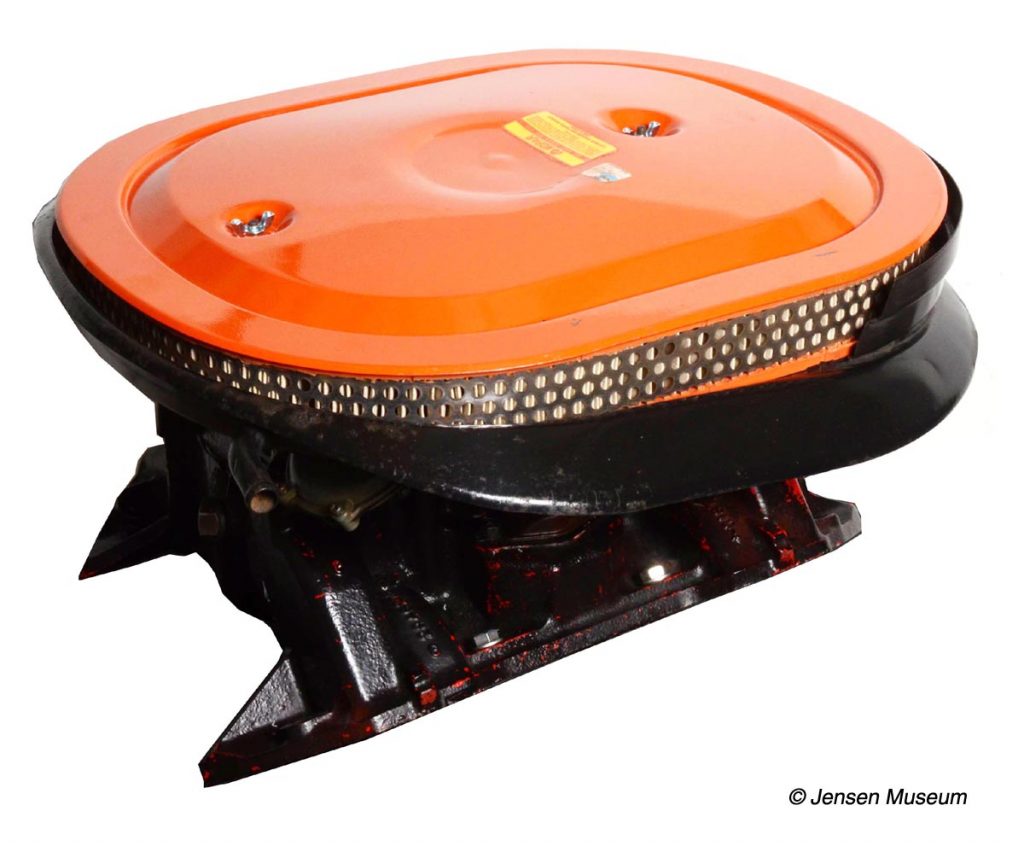 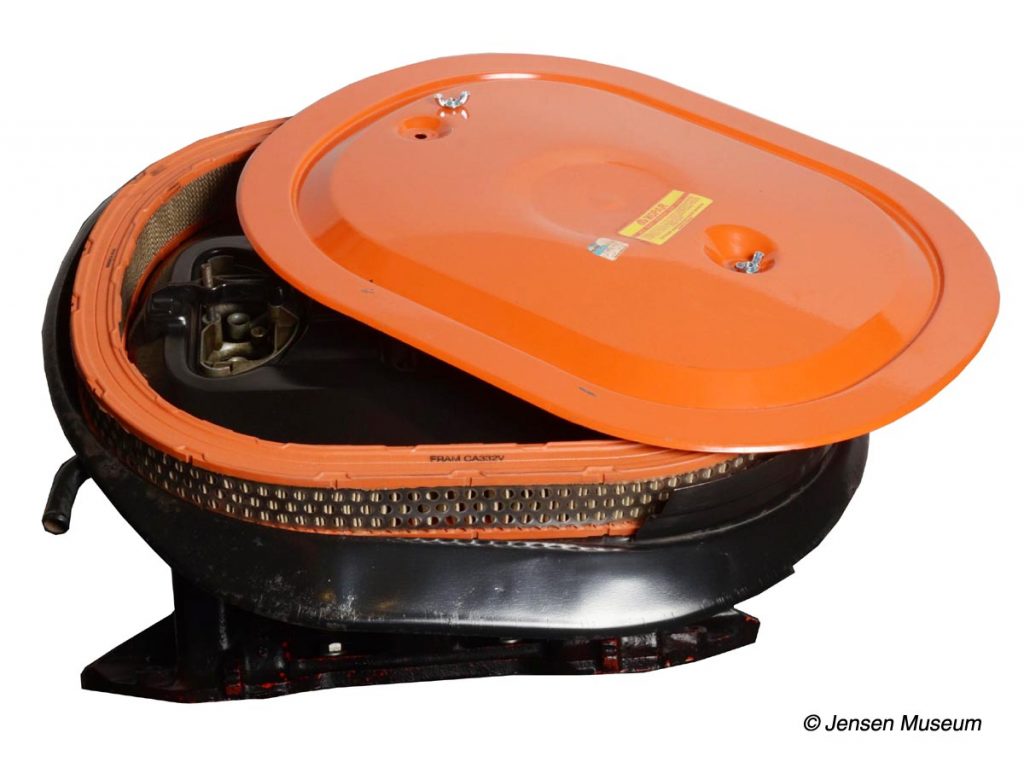 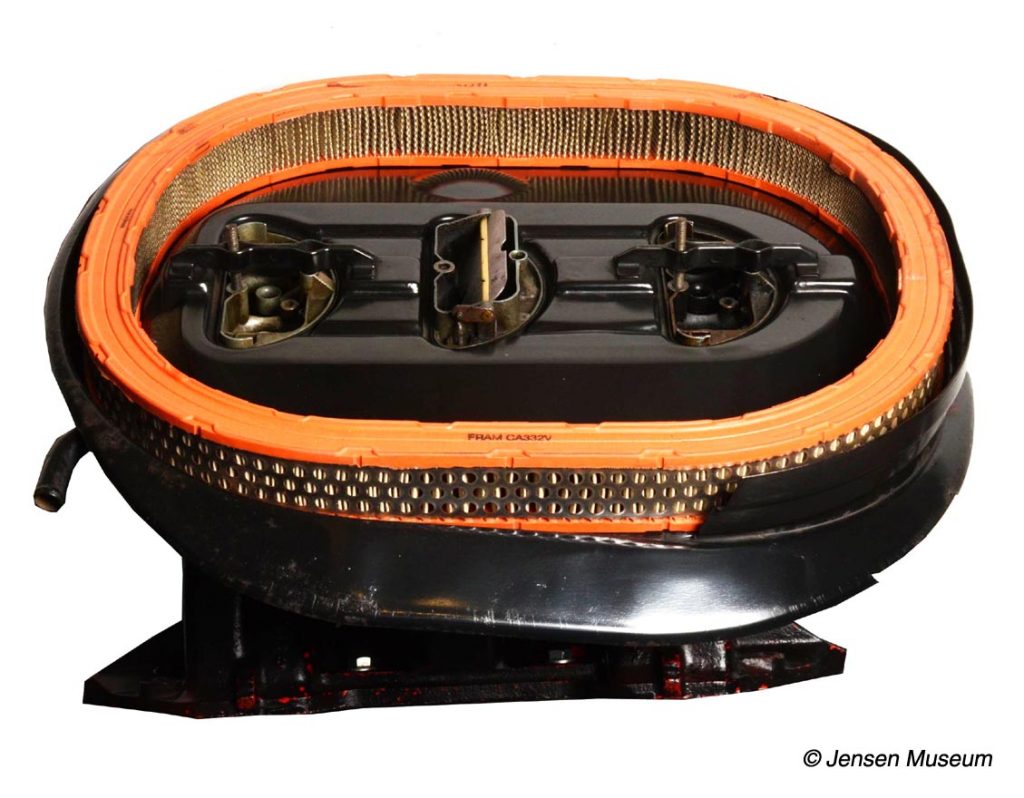 The SP set-up with the air-can lid removed, to expose the Fram CA332 air-filter sitting on the lower air-can section. 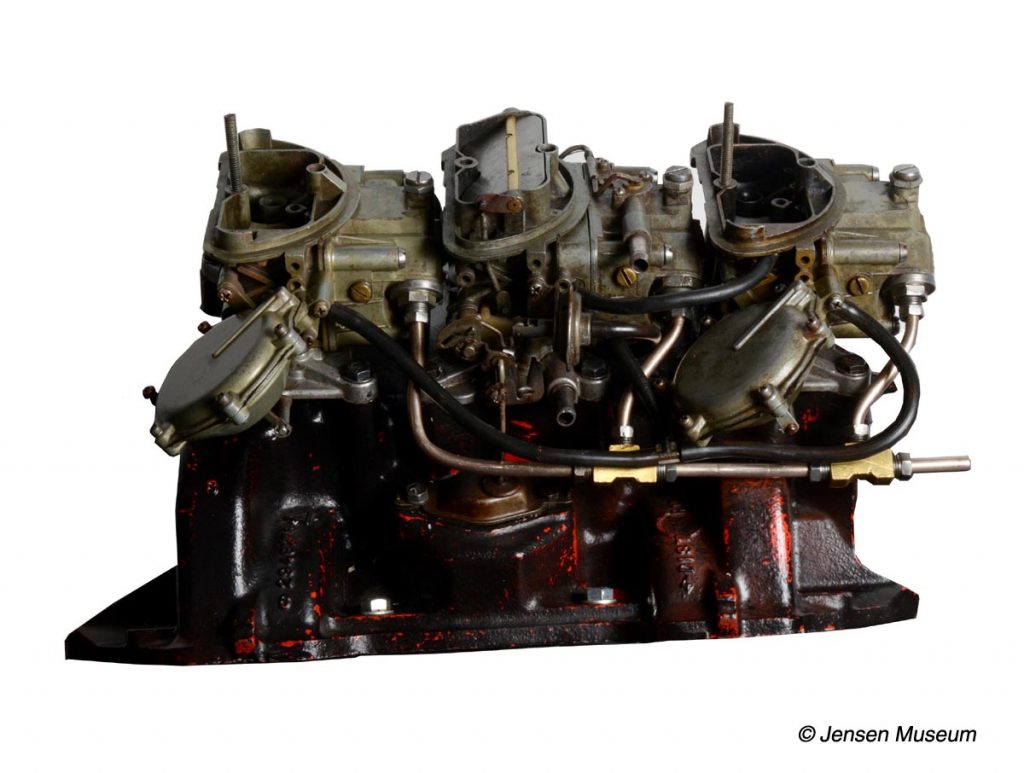 The Six-Pack carburettor set-up on manifold – Right-hand side. Air-can & filter removed to expose the three twin-choke carburettors. The three fuel lines can be seen  joined by brass blocks. The pressure chambers can be seen on the two outboard carburettors – the SP had a pressure compound system rather than mechanical system to bring the two outboards in. The pressure compound system relies on throttle position and engine load, which can give some very entertaining driving at times. After nearly fifty years, the Jensen black paint often peels off in places, to reveal some of the original Chrysler orange paint from underneath. 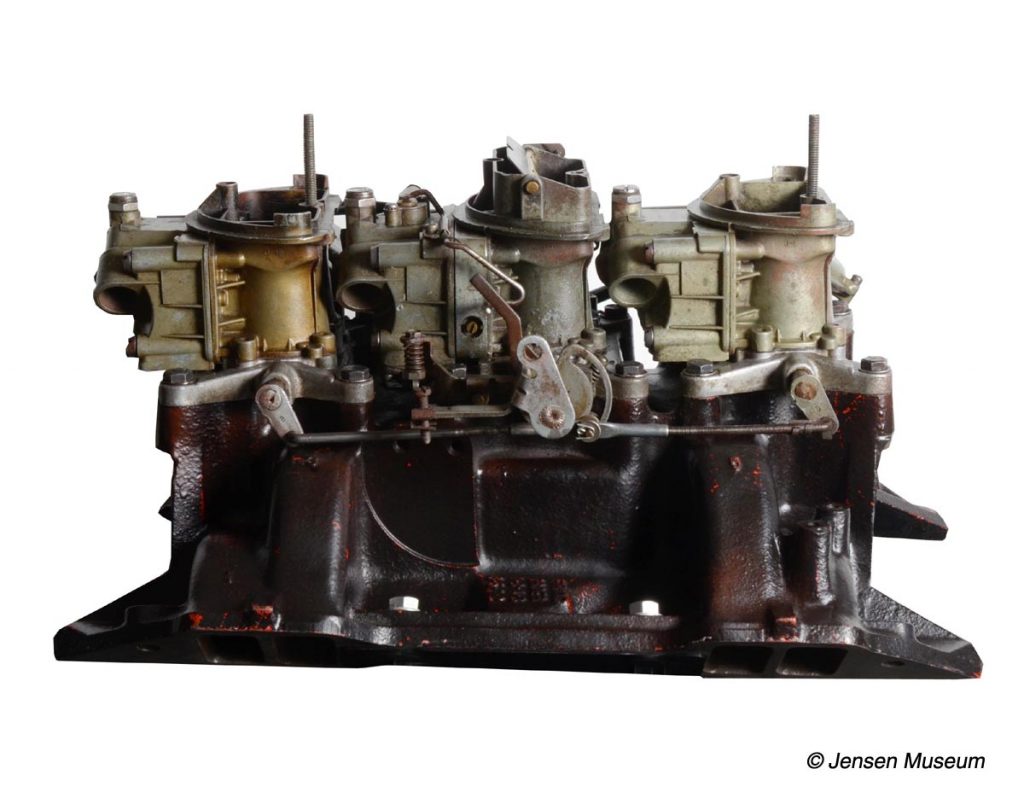 The Six-Pack carburettor set-up on manifold – Left-hand side. Air-can & filter removed to expose the carburettors. 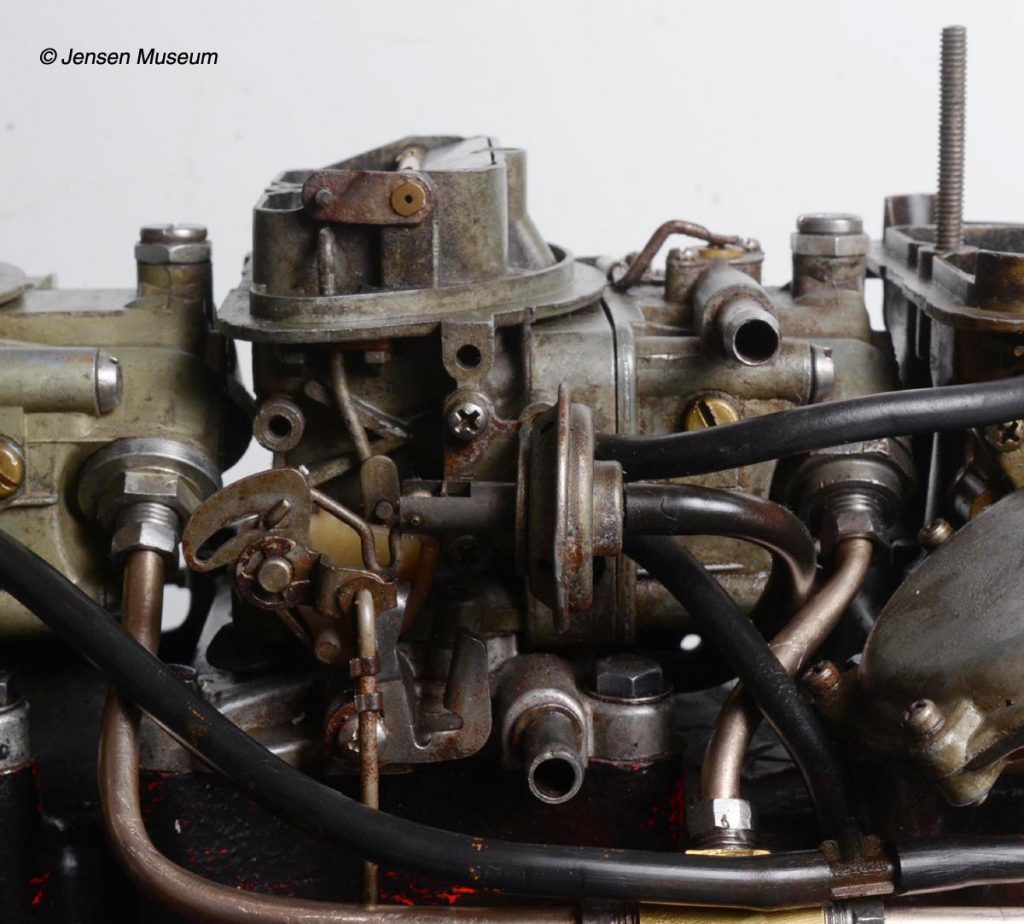 According to Mopar specialist, Duncan Watts, the carburettor list numbers found on the batch of Canadian SP units purchased by Jensen Motors, are different to all other American SP list numbers.

The images below show the list numbers on the Museum set-up, but there may be other list numbers. If one or all of the carburettors have been changed at a later date, then there could be a mix of American list numbers, along with Canadian specific numbers. 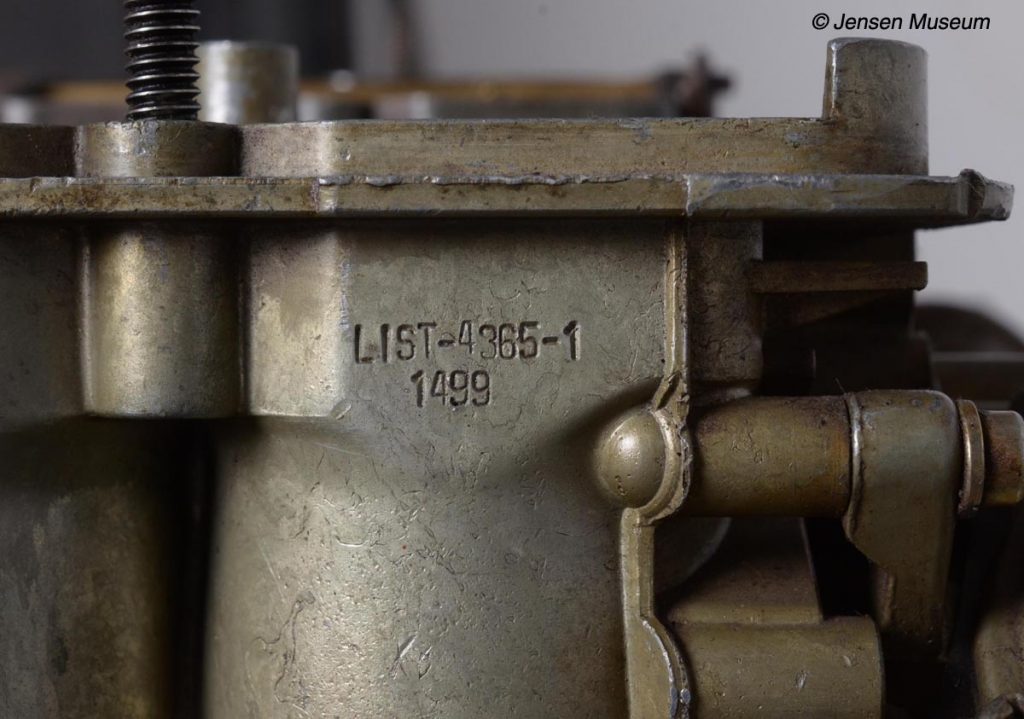 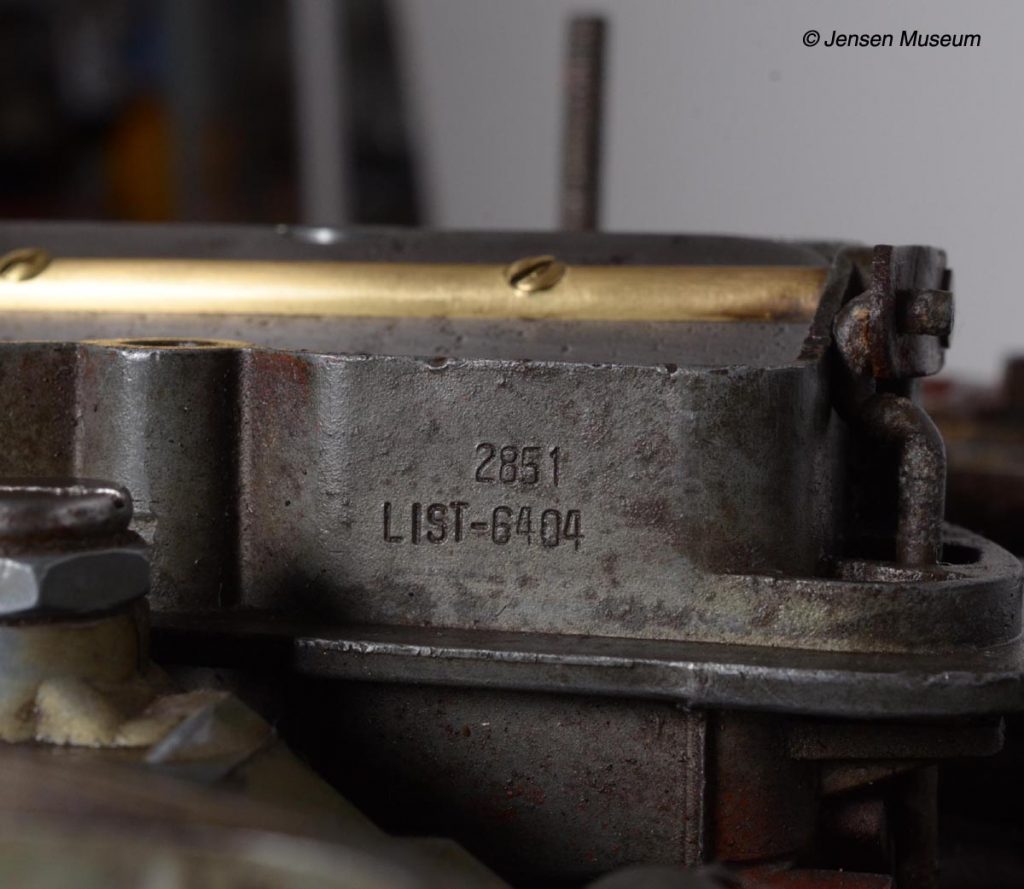 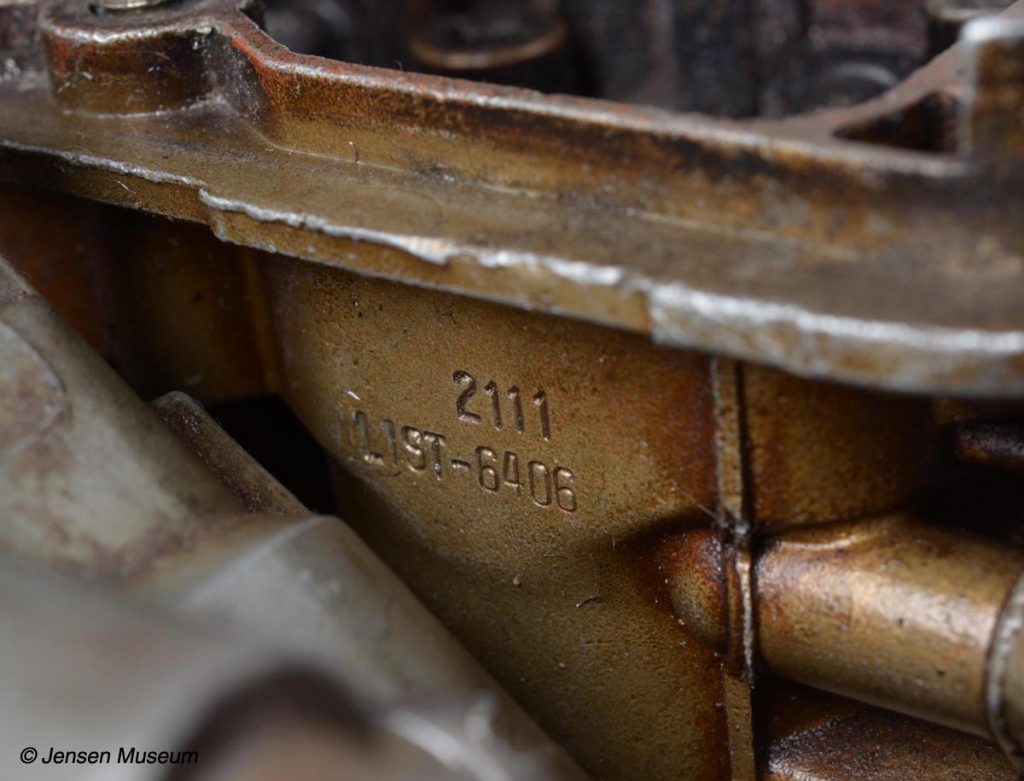 When the Chrysler SP units started to arrive from Canada, the Development Department quickly found an issue. The air-filter lid was slightly domed, and this just caught the bonnet insulation.

Development were concerned that when the car was driven, the friction of the lid against the bonnet could cause damage. They came up with a novel idea –  a small circular tool, that could be fitted to a press. When pressed onto the SP air-can lid, it put a small neat circular recess.

This took off the peak of the dome. The tool only recessed the lid by few milometers, but that was just enough to keep the lid free from touching the bonnet. Undertaken carefully, the recessed circular section could be put into the lid without causing any damage to the paint. 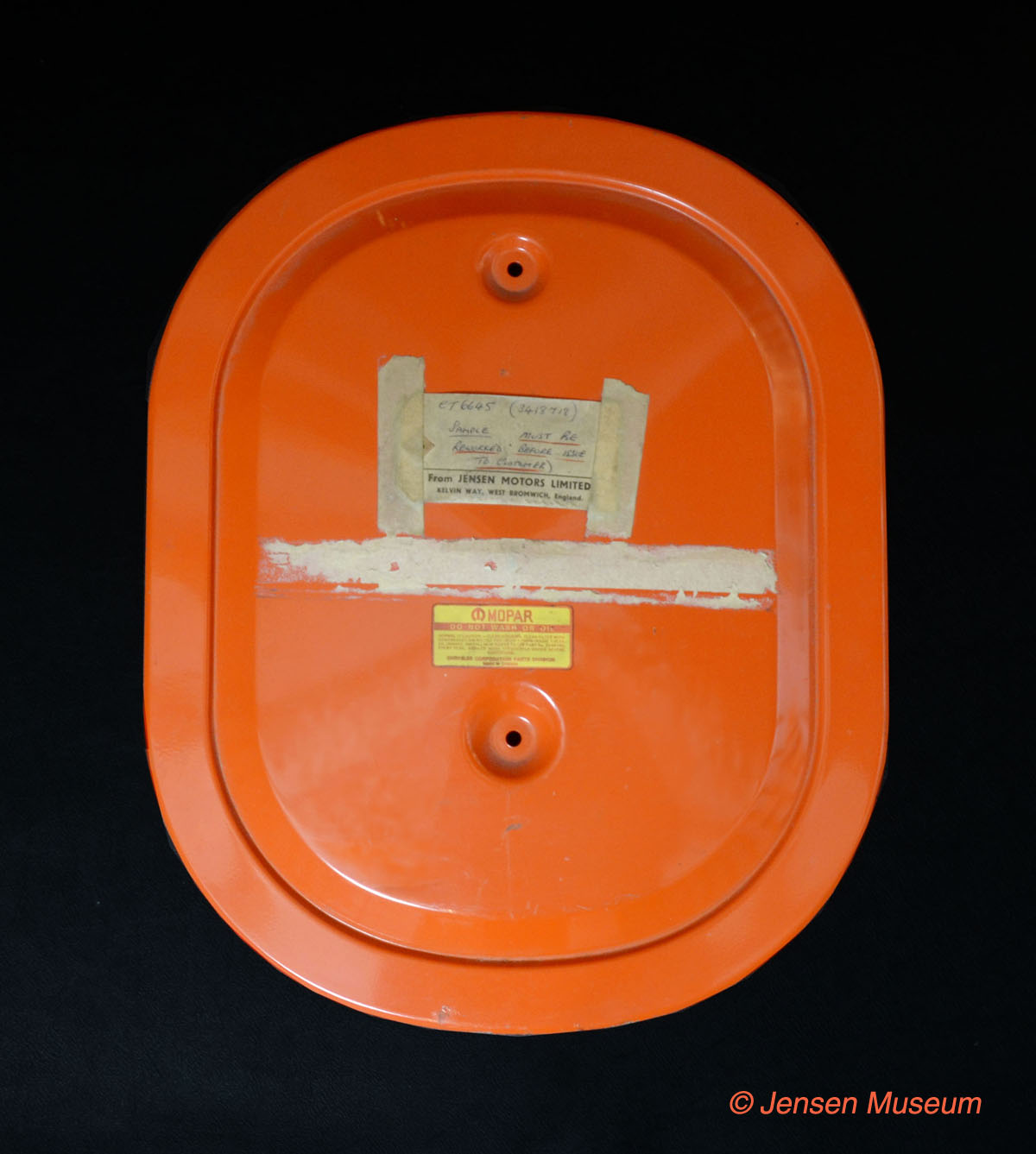 The Jensen Motors stock sample SP lid from the original Canadian batch of SP units. Jensen Motors part number CT 6645. The stores note states, “Sample – Must be reworked before being given to a customer.” The reworking was putting the circular recess to the centre. Jensen Museum collection. 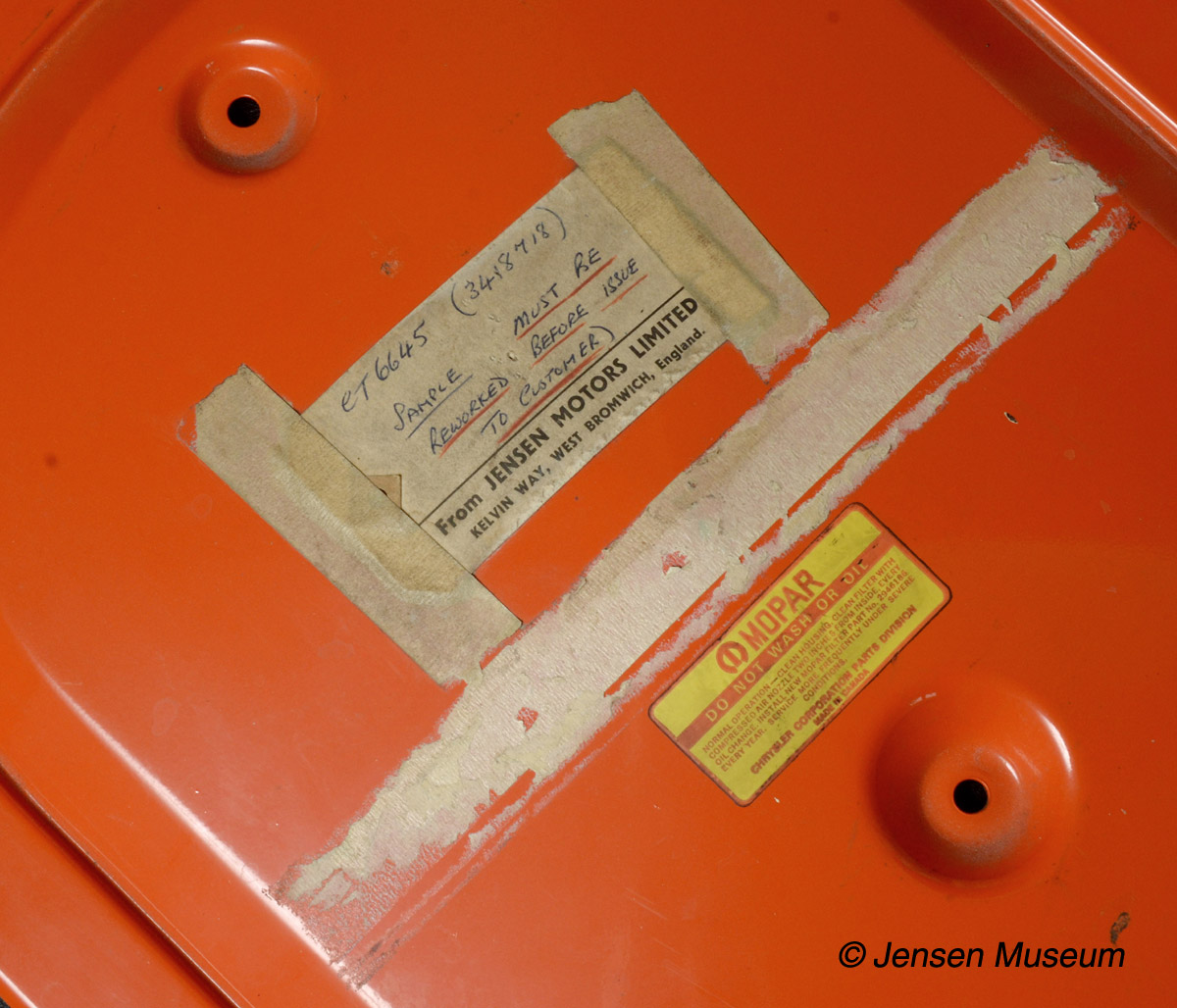 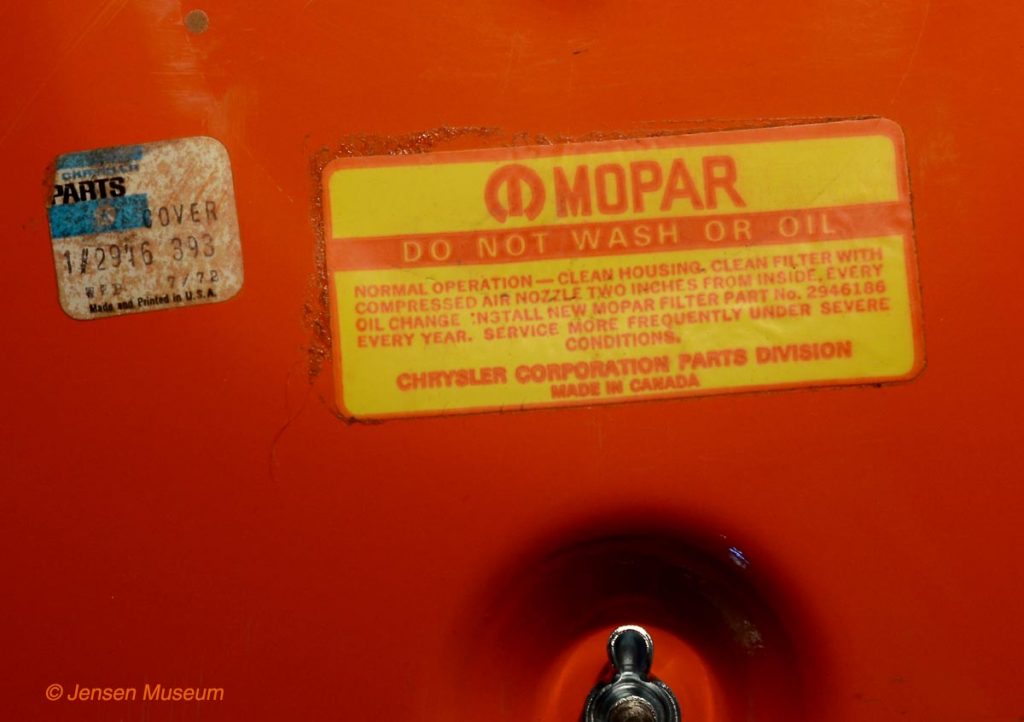 The SP air-can lid from the Museum carburettor & manifold set. This lid bears both the original Chrysler Parts label, along with the Mopar cleaning instructions. 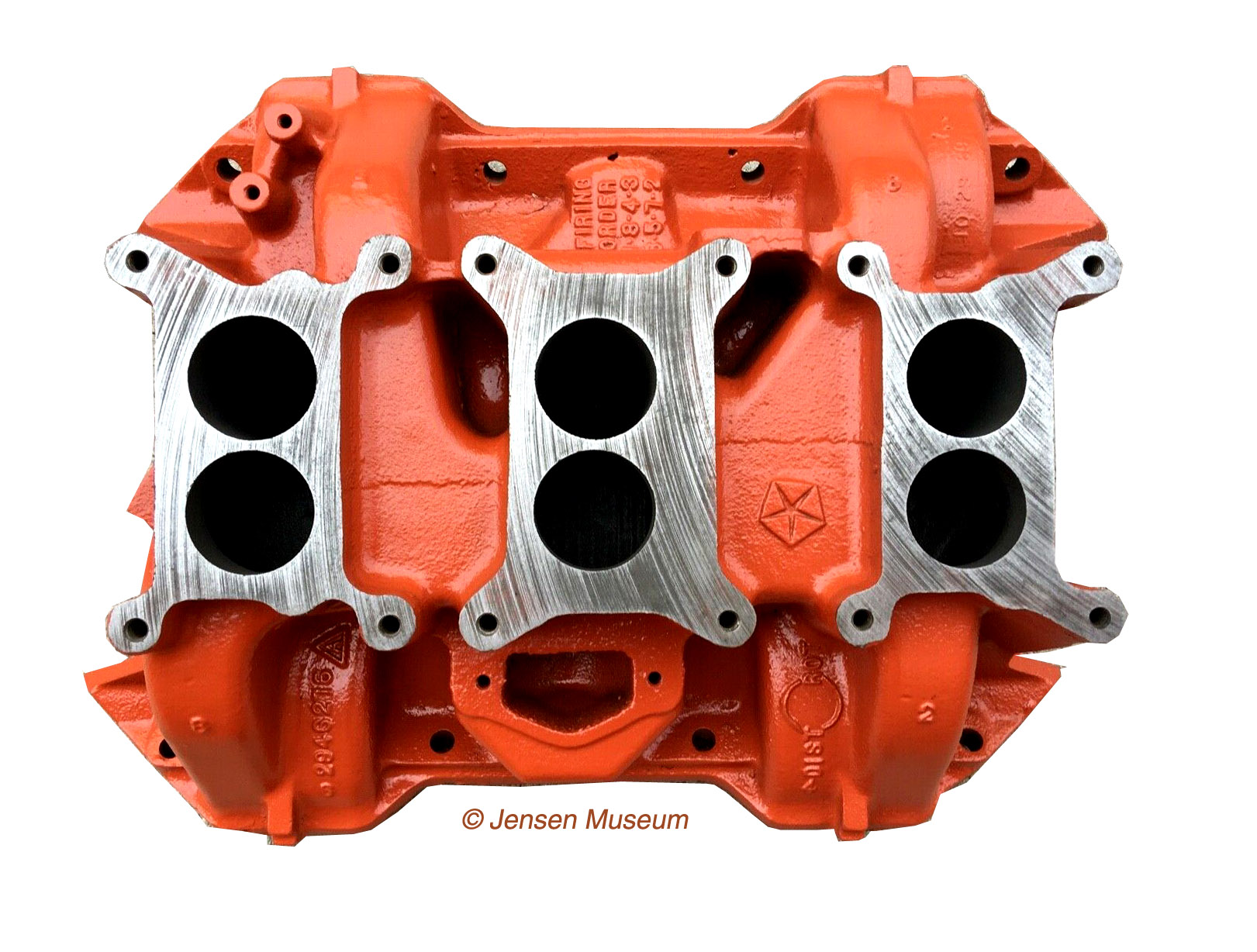 The SP manifold was painted orange by Chrysler. Typically Jensen Motors re-painted it black, as they did with all their engines. The firing order of the engine can be seen on the left-hand side (upper section of the image).

The Jensen SP had special exhaust manifolds with a set of triple ribs to each (Chrysler part number 3614295). According to Mopar specialist, Duncan Watts, Chrysler are not known to have generally fitted this type of exhaust manifold to their passenger cars with SP engines installed. 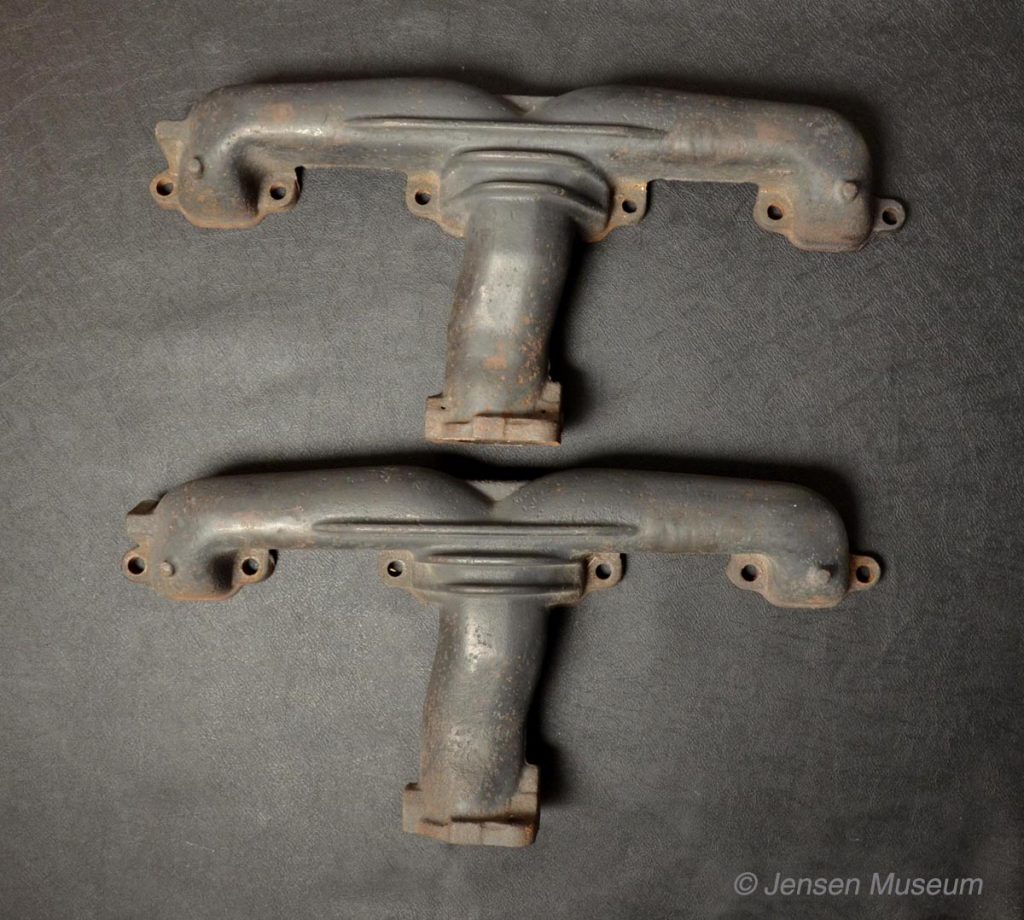 As with the carburettors, it seems these were specials made for the 200 + engines which Jensen Motors purchased from Canada. Watts states that Chrysler had their own foundry in Canada, and so it is possible the ribbed manifolds were only made there, and not in the USA. Why there was a specific manifold style for this batch of SP engines isn’t known. 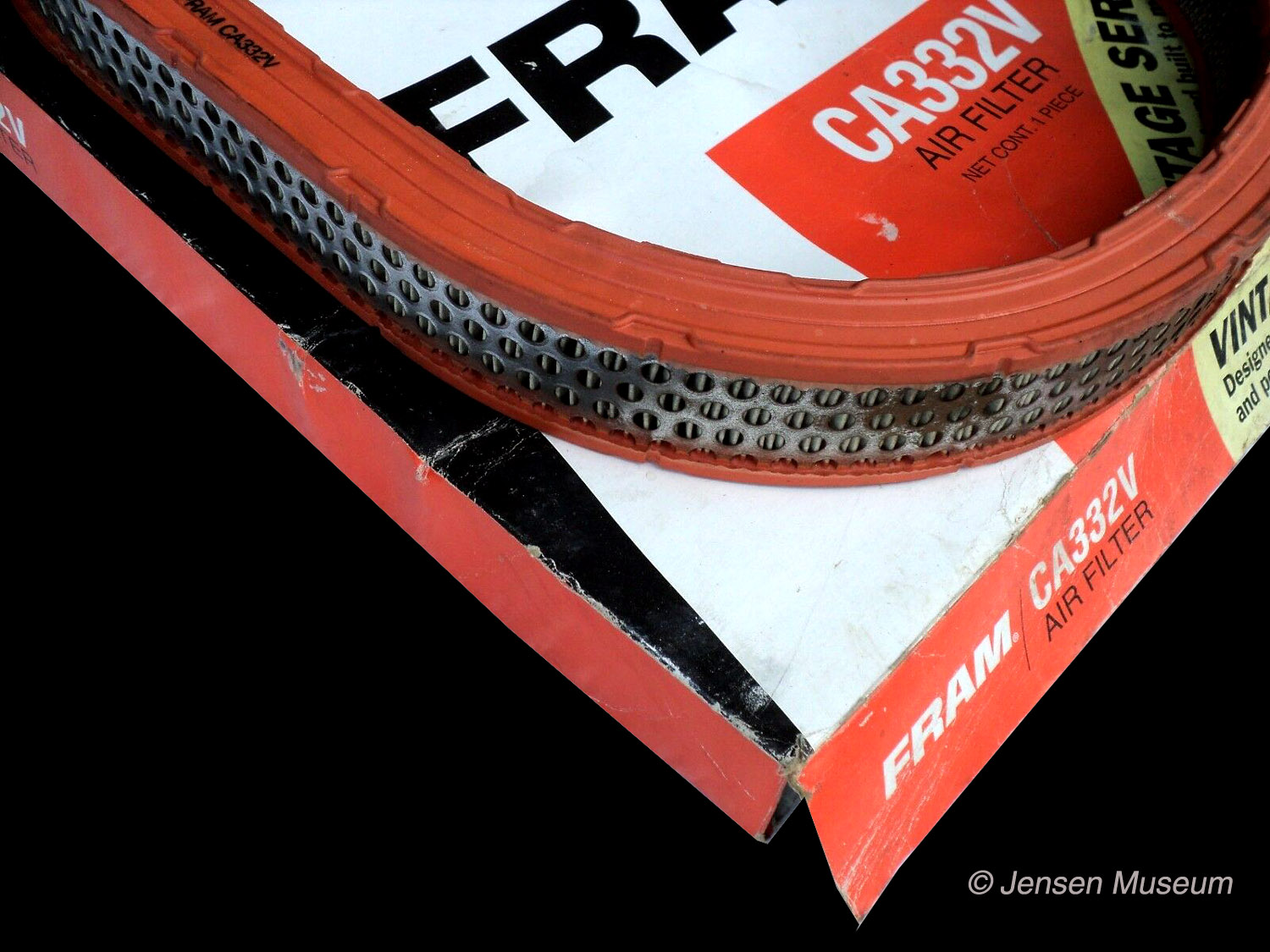 Original Fram CA332 air filter. This specification was fitted to the Jensen SP from new. 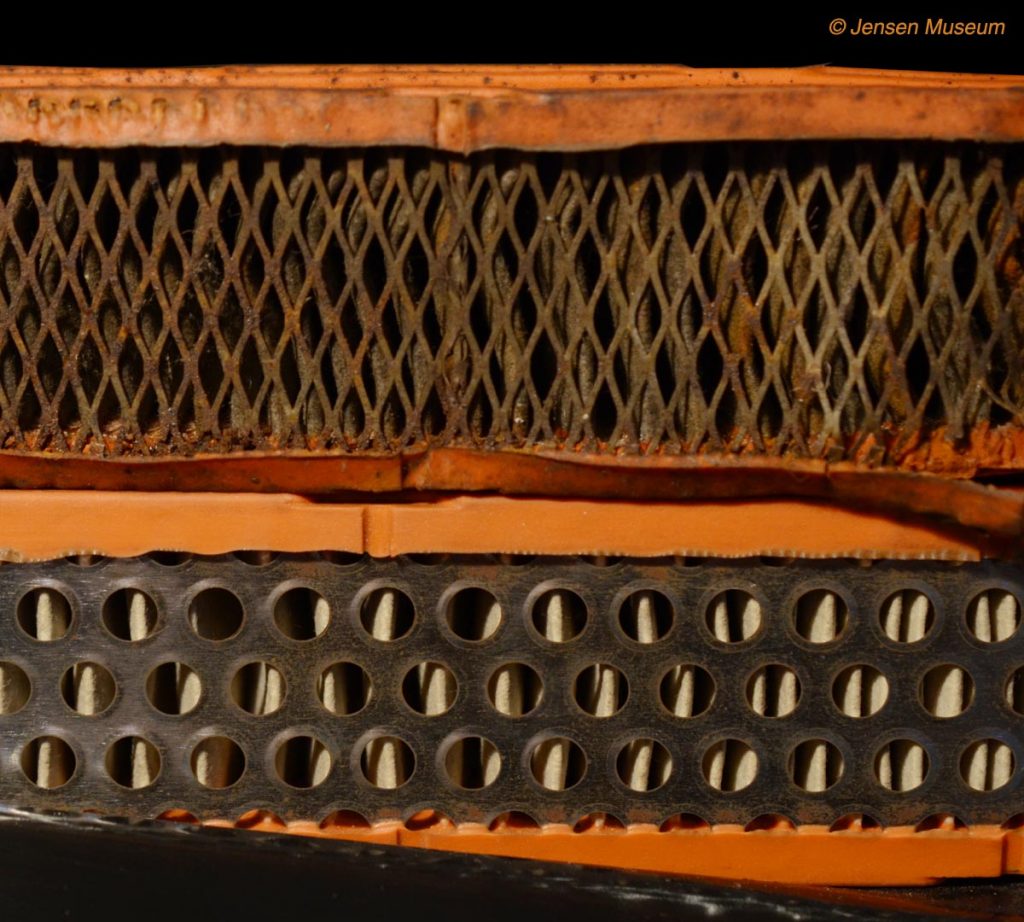 As with the standard Chrysler 440 engine, the Jensen SP had an external screw fit Fram oil filter installed at the factory. This was the Fram PH2821A, and the entire oil filter canister was finished in orange. Later versions (1980s) had a black textured finish put on to help in unscrewing the filter for replacement. 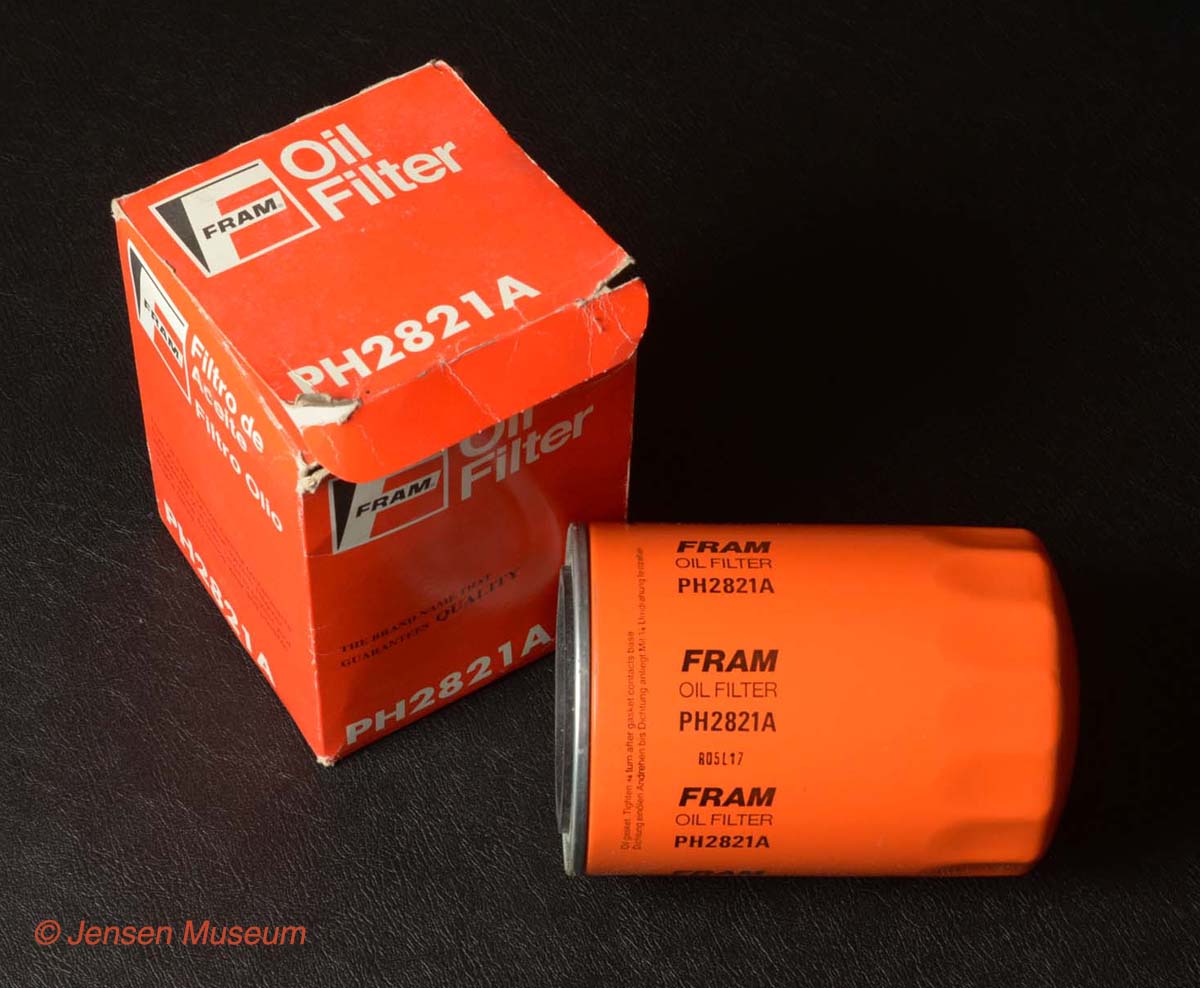 The original specification all orange Fram PH2821A screw-on oil-filter as fitted to Interceptor MK.IIIs, and SPs. 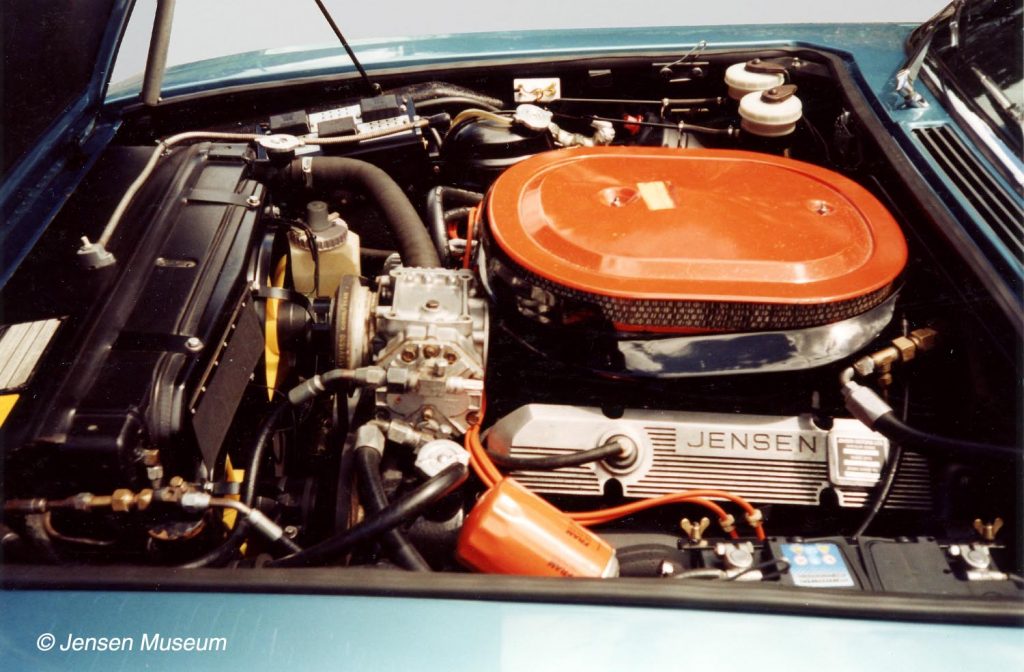 Jensen SP 131/4952. The engine-bay is particularly original. The car has the original type air filter, and the original Fram PH2821A oil filter. 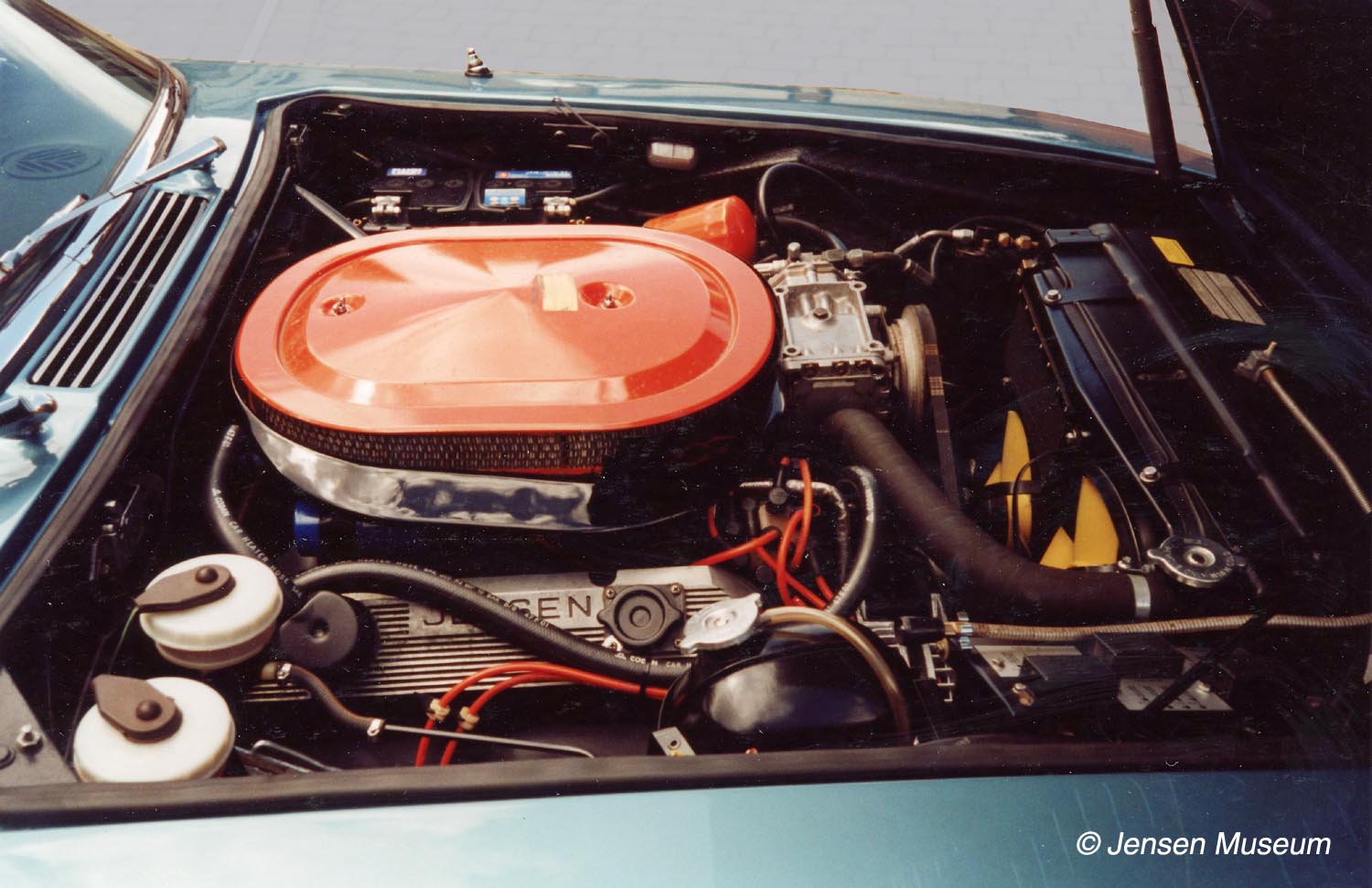 Jensen SP 131/4952. Driver-side view of the engine-bay. The brake reservoirs are 1980s replacements. The originals had black plastic covers where the wires attach. 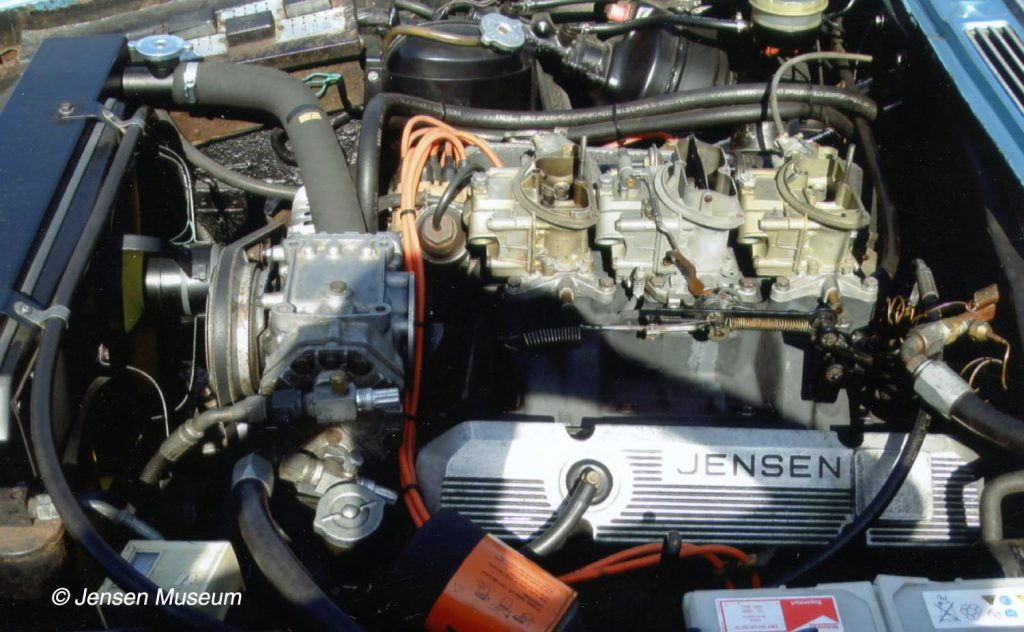 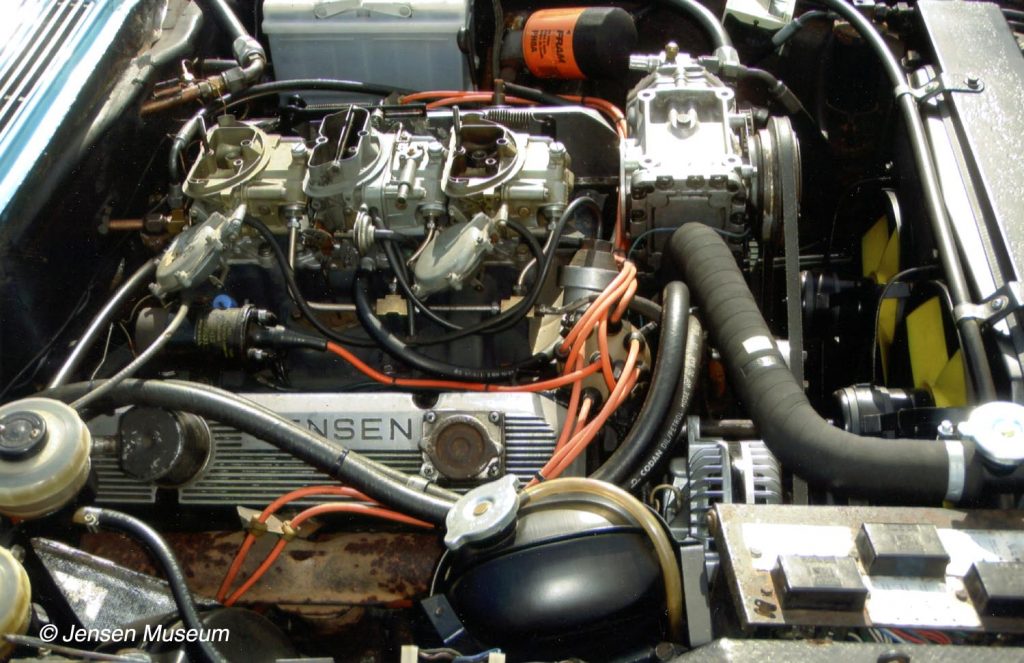 Jensen SP 138/8479. The SP coil position can be clearly seen in this image. The exhaust manifold with ribs can also be seen.