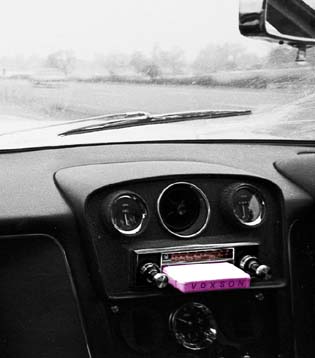 Voxson’s fresh to market Stereo 8 car entertainment system was cutting edge technology when introduced in 1968. It was Jensen’s Export Sales Manager, Tony Marshall, that saw the new unit on the Voxson stand at the Geneva Motor Show.

Marshall knew this was just the right unit for the Interceptor and FF, and negotiations for the supply of units were completed in rapid time.

It was only after Jensen had everything tied up, that other’s, such as Aston Martin, and Rolls Royce realised this was the unit they needed for their cars. Marshall tells the Museum about the Voxson-Jensen deal. 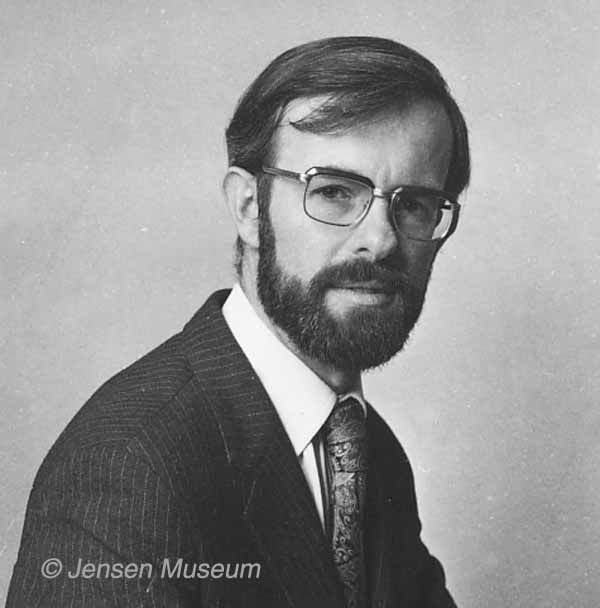 It was March 1968.  As newly appointed Export Sales Manager I visited the Geneva Motor Show, together with Carl Duerr, Kevin Beattie and Richard Graves.

The main reason for the visit, was to finalise the cessation of the contract with Sincar. To look for Jensen European representation, and for me to get a feeling for the potential market for Jensens in Switzerland.

We were not actively looking for an importer at that time, as we were still intent on securing the home market, and improving Interceptor & FF production quality, before expanding into export markets. That said, we had inherited importers in Belgium (Beherman Demoen) and France (Soc France Motors) from Sincar.

One of my targets was to have a good look at car radio/stereo systems. The styling of the Interceptor and FF dashboards provided space for just a conventional car radio.

However, it was becoming obvious to us by the mid-1960s, there was an increasing demand for Stereo 8 or 8 Track tape players. This involved the need for additional space for most of the units we had seen,  and it would prove difficult for us to work in extra room to the cars we were making. 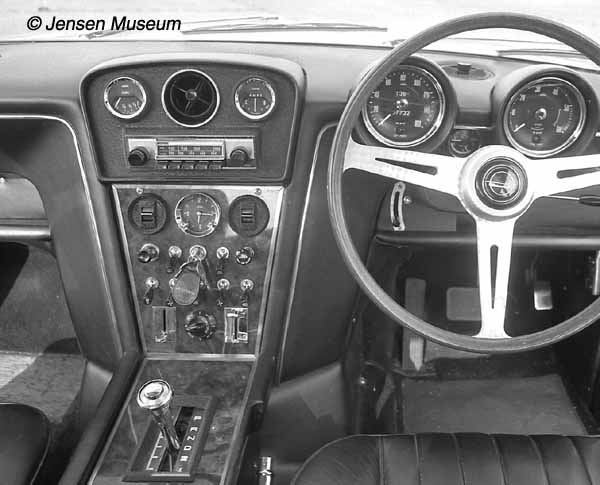 A MK.I Interceptor from early 1968. The Radiomobile 980 was the default unit at that time. Marshall realised they needed the option of a radio and combined 8 track player – but how could it fit ?

With all this in mind I made a tour of the accessory stands at the Geneva Motor Show, and was delighted to find the stand for the Italian company, Voxson. This design-led Company had just introduced to market their combined radio and 8 track unit.

And there it was – this great compact unit mounted on an exhibition stand, and sending out some delightful music from an 8 track cartridge.

Looking at this new unit, I realised it would solve the whole issue of our installation space problem. The height and width of the unit meant it could fit into the space we had available. After discussing the unit with the Voxson guys, I ran off to find Carl [Duerr], and Dick [Graves].

Once I located them, I brought them over to the Voxson stand, and left them to discuss things further. With Carl & Dick on board with the viability of the Stereo 8 radio player, negotiations with Voxson began almost immediately. Initial sets would be sent over to West Bromwich by express courier for evaluation.

The Voxson 104 Stereo 8 track radio player had a separate amp unit, so development had the job is working out how to fit that. There was only enough room in the Mk.I Interceptor & FF to fit the actual tape / radio unit in place of the Radiomobile 980.

Various places were looked at, but it quickly became clear that the main linking wires from the amp to the main unit, restricted how far it could be moved away from the main unit. In the end, the amp was pushed along the inside top area under the dashboard, towards the passenger side.

When the new MK.II was launched in 1969, it changed again, and the amp was dropped down the side of the transmission tunnel on the passenger side. 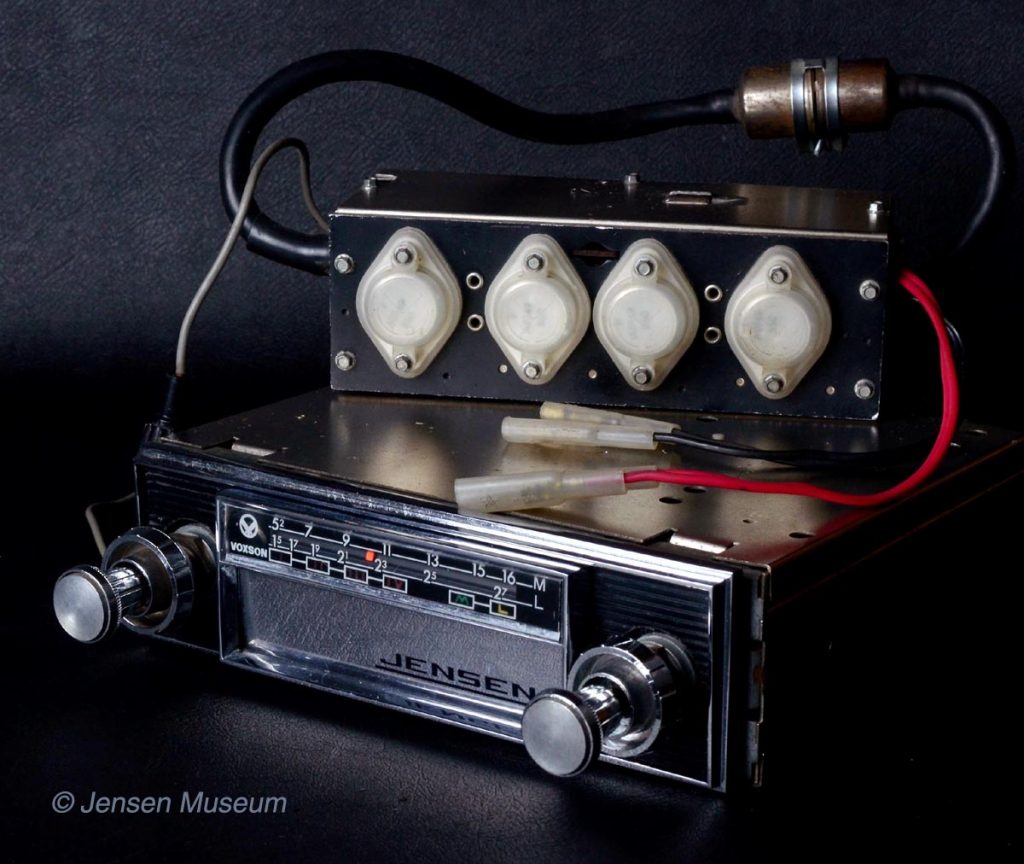 The Voxson 104 Stereo 8 track player with radio. A ground breaking unit by Voxson, that could fit in the space of a conventional radio. Voxson separated the amp, which had umbilical wiring to the unit. The unit was perfect for the Jensen Interceptor & FF – but development had to find somewhere behind the dashboard to the fit the amp. 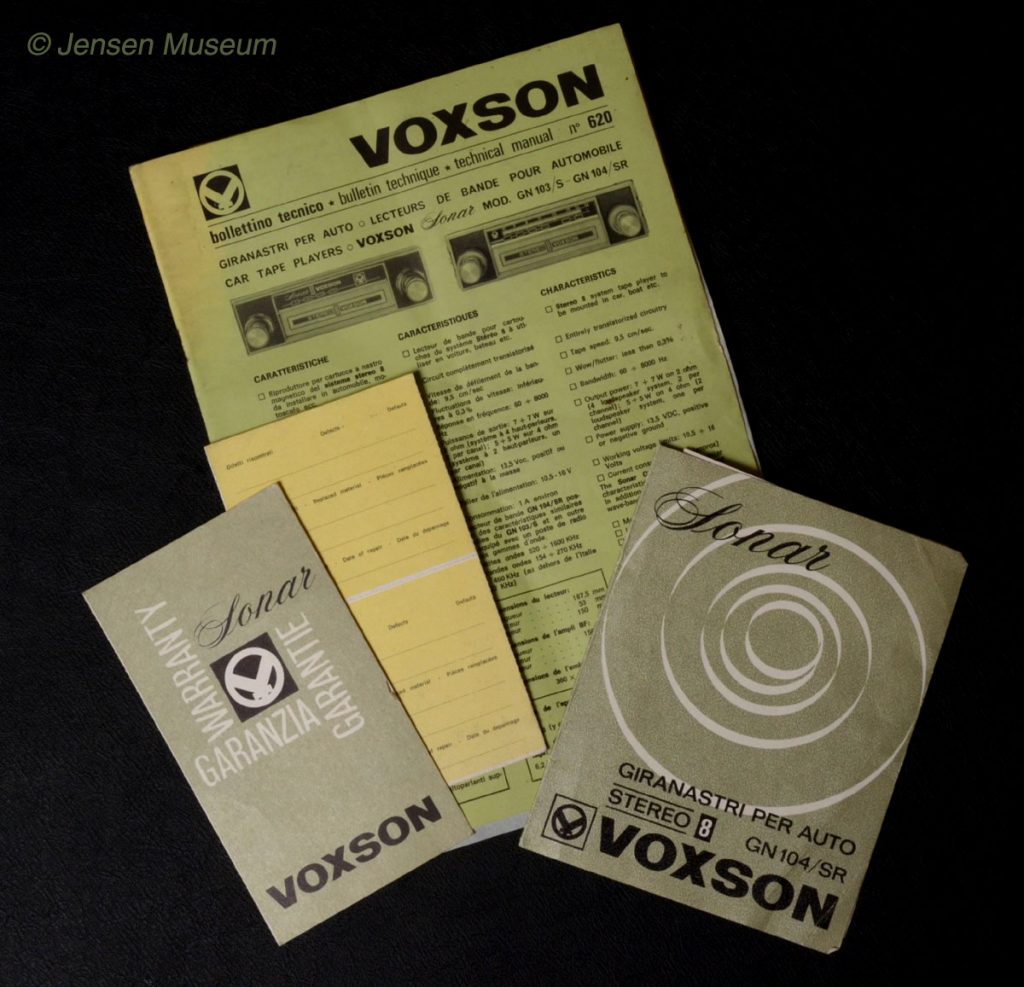 Meanwhile, there was the matter of the speakers. With the Radiomobile 980, there was a single speaker mounted underneath the parcel shelf, with a series of stamped holes through the leather. A second speaker was mounted inside the dashboard, on the passenger side. Development initially left this same set-up, but the sound wasn’t great.

I might be wrong, but I think Jensen asked if Voxson would be willing to send one of their engineers over to us, to find the best placement of speakers for sound quality. 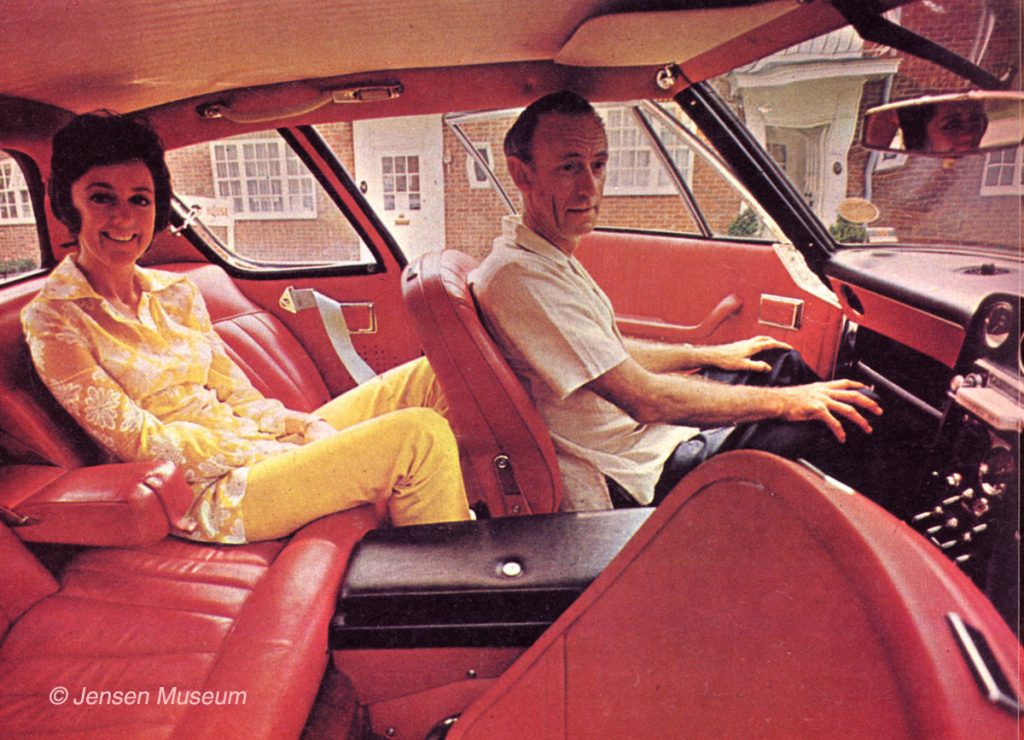 Jensen FF demonstrator car (119/117) with Voxson set-up. The star shaped punched holes can be seen to the rear quarter panels, just down from the ashtray. The occupant in the passenger seat has his leg hiding the speaker holes of the door card.

The only downside to the speaker set up for the Voxson units, was that if a car had already been built up with the standard radio system, it was unrealistic to retro fit a Voxson system, if the owner changed their minds.

The results of the new system were truly dramatic. The sound quality was just extraordinary for 1968 – far ahead from anything most of us were used to. Once we were happy with the result, we placed an initial order for something like 30 units.

By the following year, the Voxson option was taken up by a majority of Interceptor and FF customers, so larger amounts were ordered.

One nice touch that Jensen asked Voxson to do, was to produce an 8 track flap in stainless steel with the Jensen name on instead of the Voxson name.

We did end up with a mixture of both types, and as such, some cars ended up with units bearing the Voxson name, while others had the Jensen name. It was simply a case of what we had in stock at the time.

Interestingly,  I don’t think Rolls Royce, or Aston Martin ended up with their own branded units. In fact, Jensen even had two 8 track music cartridges with Interceptors on the cartridge artwork – fittingly, Music For The Motorway. 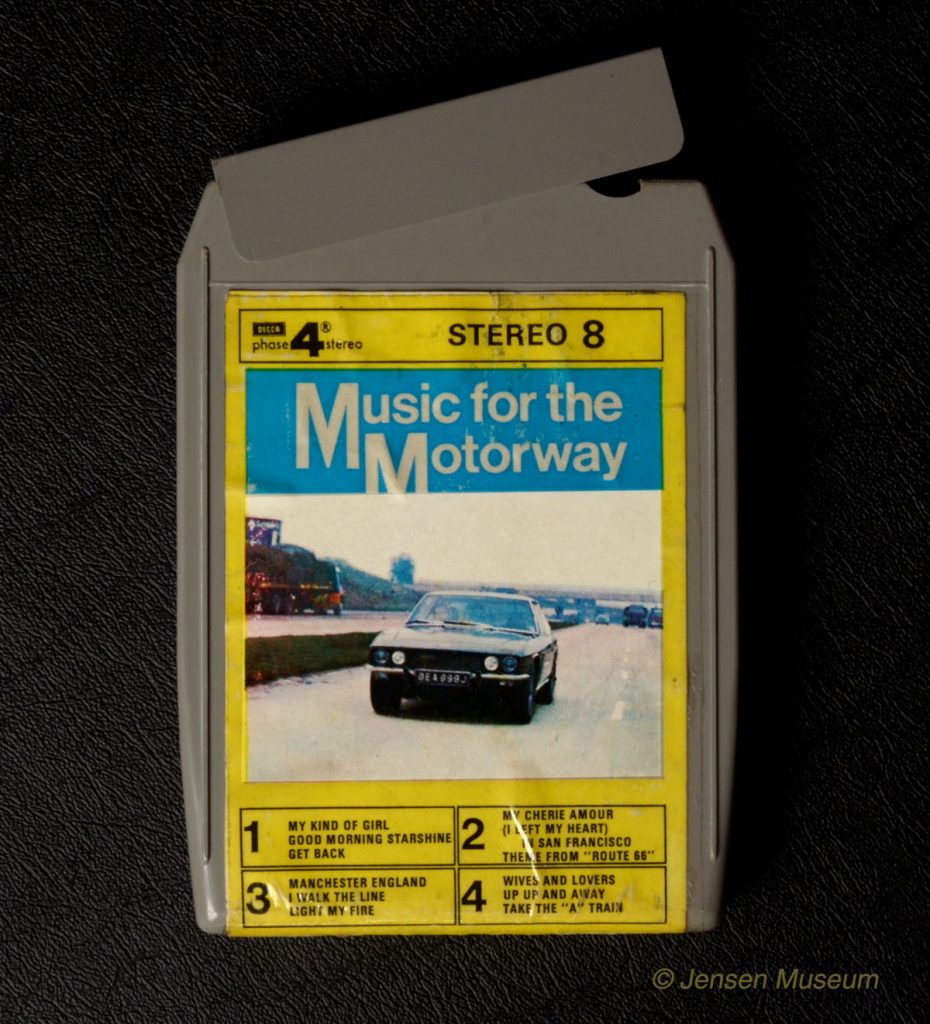 The Music For The Motorway 8 track cartridge, with an Interceptor flying along the motorway on the outside lane.

The problem of storing the cartridges always remained a problem, but as the playing time was much longer than that of tapes, it wasn’t a serious one. In Italy, Voxson had negotiated a deal with the petrol company Agip. The deal meant that Agip’s petrol stations would hold libraries of tapes for customers to use on an exchange basis.

It was a brilliant idea, and one which I tried to copy using Shell/BP. I managed to set up a meeting with their accessory people, but I quickly realised there was a general lack of interest in the idea.

Incredibly, I was told that in-car entertainment systems were just a passing phase, and would soon die out – on that negative point, I was shown the door. 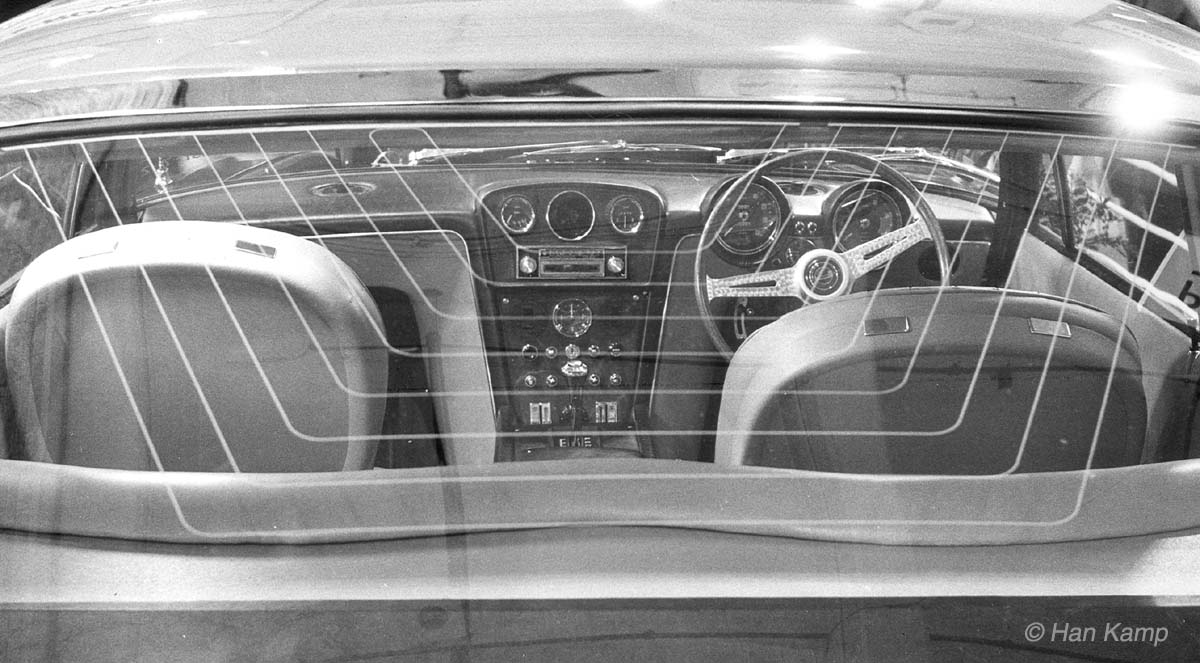 One of the first Jensen cars to receive the Voxson Stereo * was Jensen FF chassis number 119/081. The car photographed here at the October 1968 Motor Show.

The motor industry is a relatively small world, and firms like Jensen, and other high-end car companies were frequently in contact with each other. The result was that news of the Voxson-Jensen deal was quickly picked up by Rolls Royce and Aston Martin – both facing the space problems that we had. 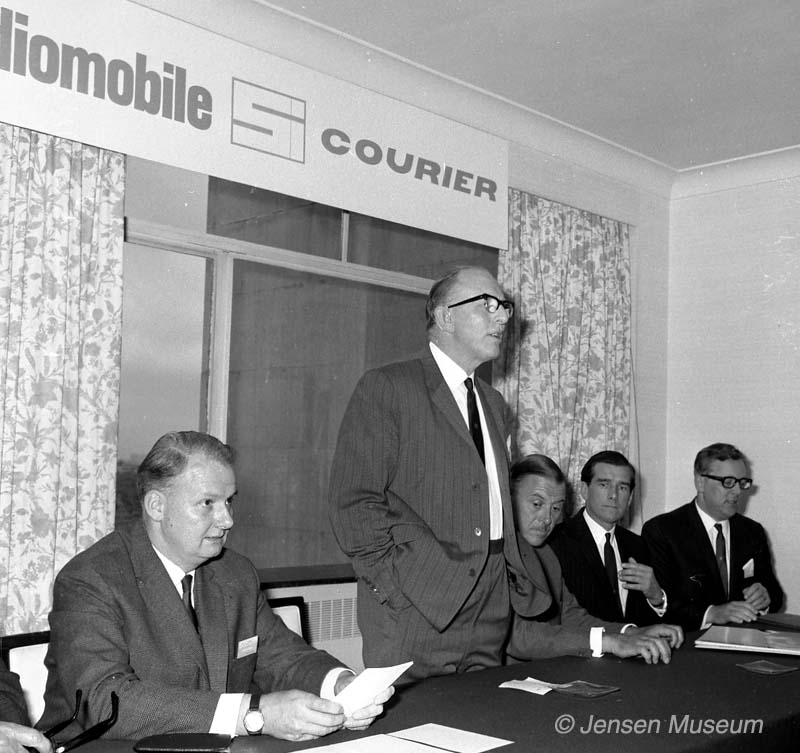 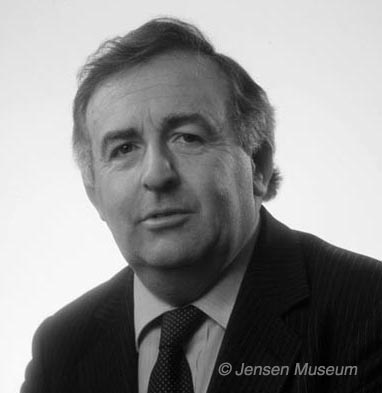 It just so happened that Good Relations, our PR company, numbered Smiths Industries among their clients, and it was not long before they became sole importers for Voxson in the UK, and later became manufacturers under licence, using the Smiths Radiomobile name.

So, through Jensen , and with the help of Good Relations, our competitors such as Rolls Royce, and Aston Martin were also in a position to purchase Voxson units for their cars.

In 1969 I returned to Switzerland, this time to appoint an importer. I drove over with Gethin Bradley [Good Relations director] and his girlfriend Margaret, in my export demonstrator, the first tangerine painted Interceptor.

They would be joining me for the outbound journey, but were only going to stay for the first couple of days of the motor show, after which they were making their own way back to England.

This tangerine Interceptor, fitted with one of the Voxson Stereo 8 units, stood testament to just how good these units were. The miles seemed to pass rapidly, with the 8 track blasting away with The Beatles in full cry! 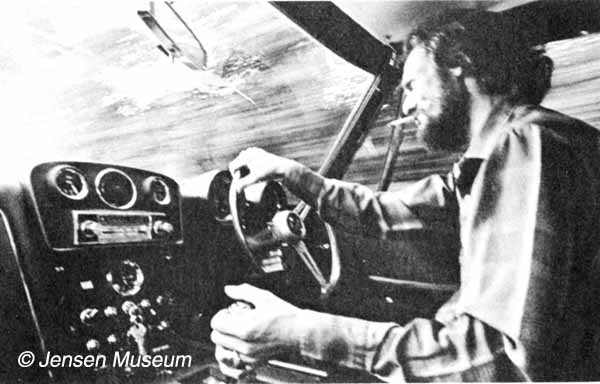 The rock drummer, Ginger Baker, was one of the many owners that had the Voxson Stereo 8 unit as an option for their Jensen.

The Voxson 104 Stereo 8 radio player as fitted to the MK.II Interceptor & FF.  A Jose Feliciano 8 track cartridge set to play.Photograph from the Michael Cooper archive.

During the show I visited the Voxson stand again, where I was treated like an old friend by the staff. I was very surprised to be handed a gift for introducing them into the UK – it was a beautiful compact Voxson Stereo 8 home unit.

A nice touch, but I had to get it back home, and through Customs. So, after the Show had finished, and arriving in Dover very late at night on the last ferry from Ostende, I was pulled aside by a keen young officer, and was fairly thoroughly inspected.

Fairly was the word, because he really only wanted to have a good look at the Jensen Interceptor, still somewhat a rarity in those days. He asked if he could sit in the car, to which I was hardly in a position to say no,  and elected to sit on the passenger side “Lovely and very comfortable”, he said, “but not much leg room is there?”

I shrugged my shoulders nervously, and bid him good night. As I jumped back into the driving seat, I hoped he had not damaged the Voxson home unit, which I had hidden under the passenger footwell carpet up by the bulkhead !