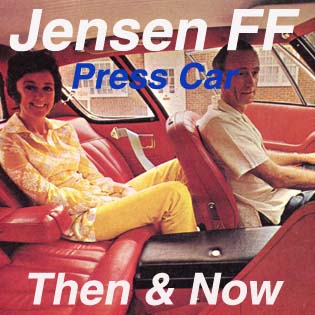 Jensen FF, chassis 119/117, was acquired for the Museum collection in 2007. This famous Jensen FF press car had languished in a garage since the 1970s, and had never been restored.

As such it is one of the most original Jensen FF cars surviving today. Now fifty years old, the Museum has assembled a photographic Then & Now of Jensen FF 119/117.

Registration changes: From UEA 999G to private registration not known. Then WYF 258G, then to AAB 9, and then back to UEA 999G

The 119/117 chassis was scheduled as a factory demonstrator / press car. The car’s specification was agreed on Stratosphere blue paint with red leather trim. The car would have sundym glass, and a Voxson ‘8’ track /radio as options.

119/117 was first registered on 21st April 1969 as a demonstrator / press car for Jensen Motors Ltd. The car was assigned the West Bromwich registration ‘UEA 999G’.

Additionally, Donald Healey, had asked Jensen Motors about a loan of a Jensen FF. Motoring journalist, Courtenay Edwards, was keen to drive a Jensen FF over in France, and write an article for the Sunday Telegraph motoring section.

Edwards had asked Healey if he could arrange such a loan, and if Healey would join him. The loan took place in June 1969. 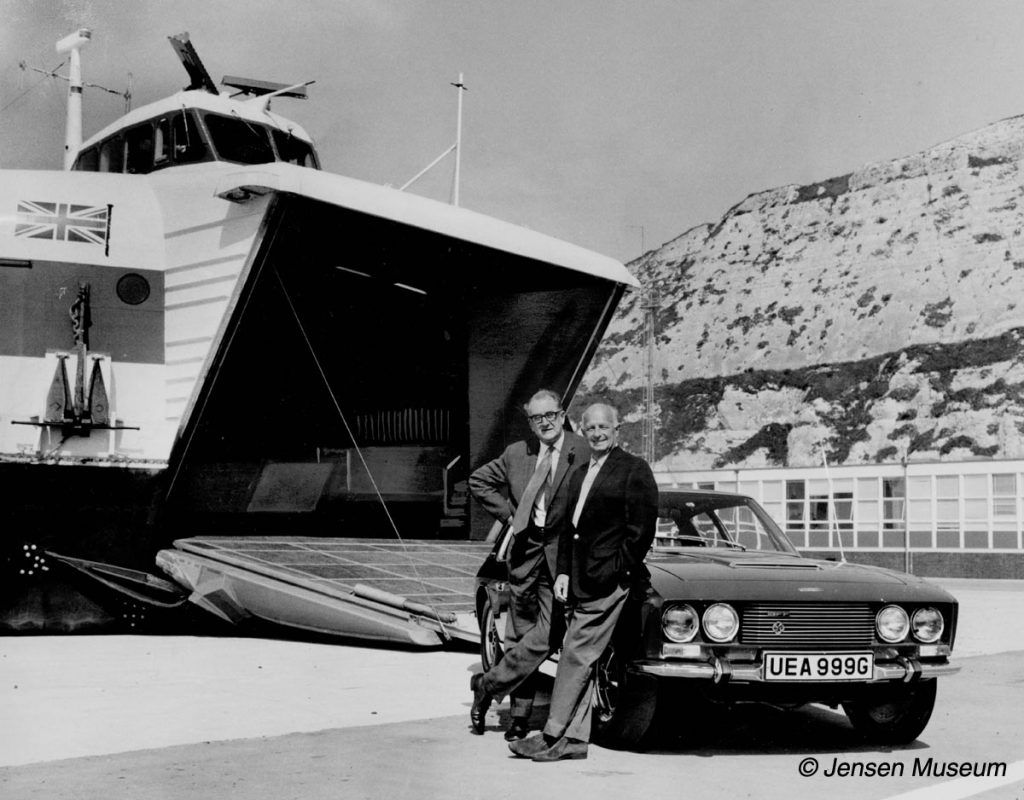 Courtenay Edwards and Donald Healey standing by 119/117 in June 1969. The two men had loan of the Jensen for an excursion to France. An article about the drive would later appear in the Sunday Telegraph. 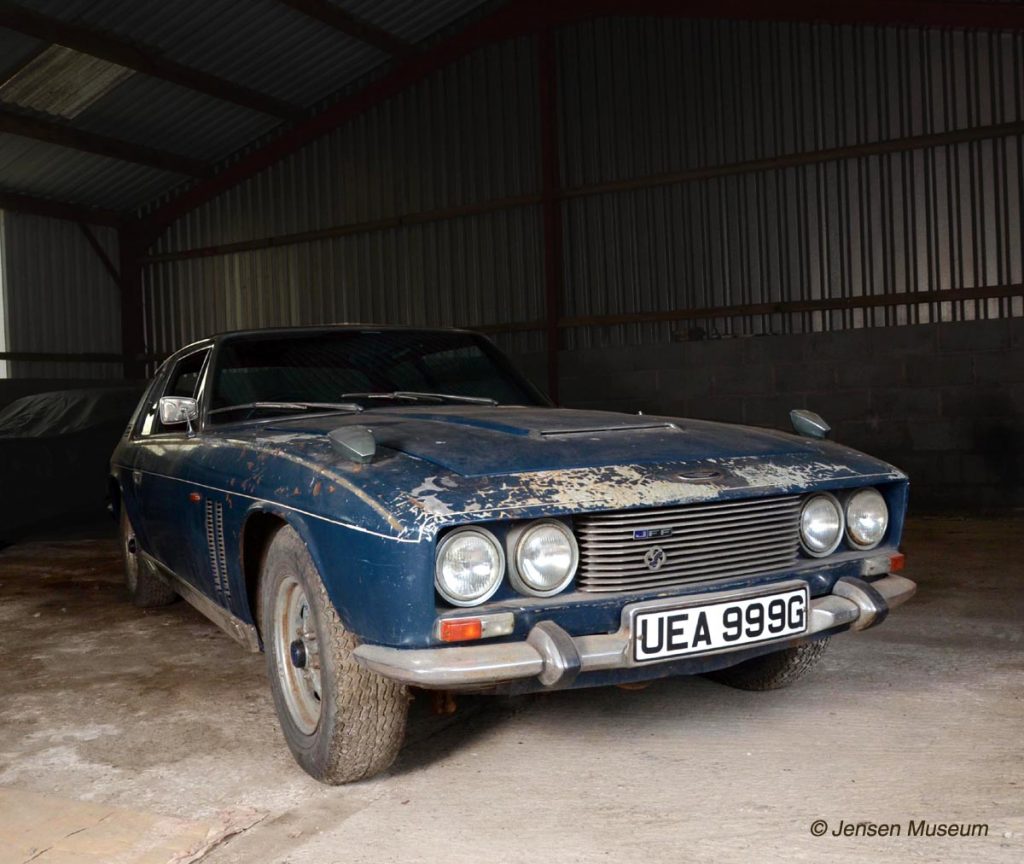 119/117 positioned just as it was when Edwards and Healey were standing against it back in 1969.

Harold Dvoretsky, the European Editor for Modern Motor magazine, was one of the first to have loan of 119/117 in July 1969. Various images were taken during loan by Dvoretsky, and the Museum has had photographs taken from similar angles to provide a tantalising Then & Now fifty years on. 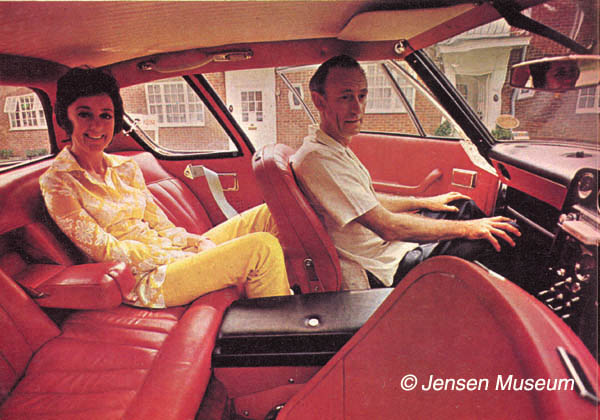 Harold Dvoretsky and his wife, Angela, check out 119/117’s interior, before setting off for the continent. 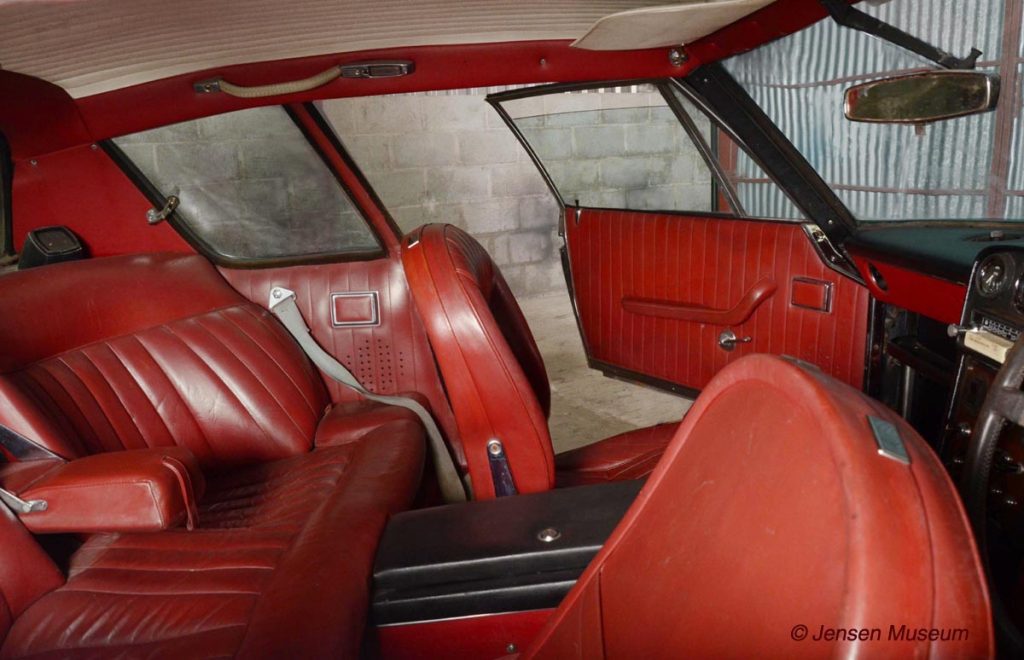 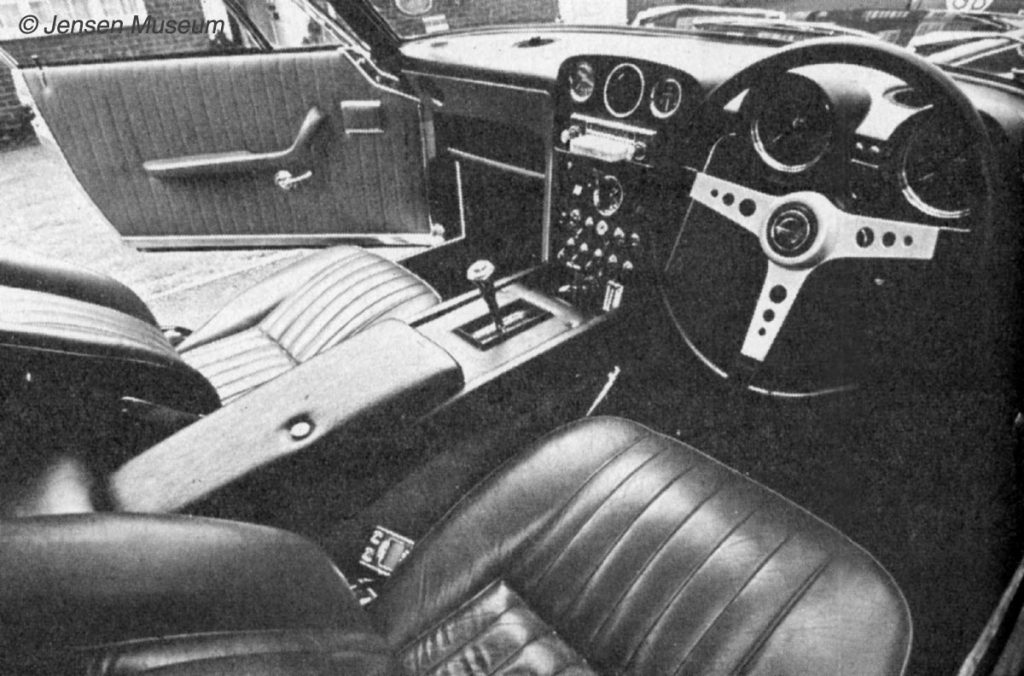 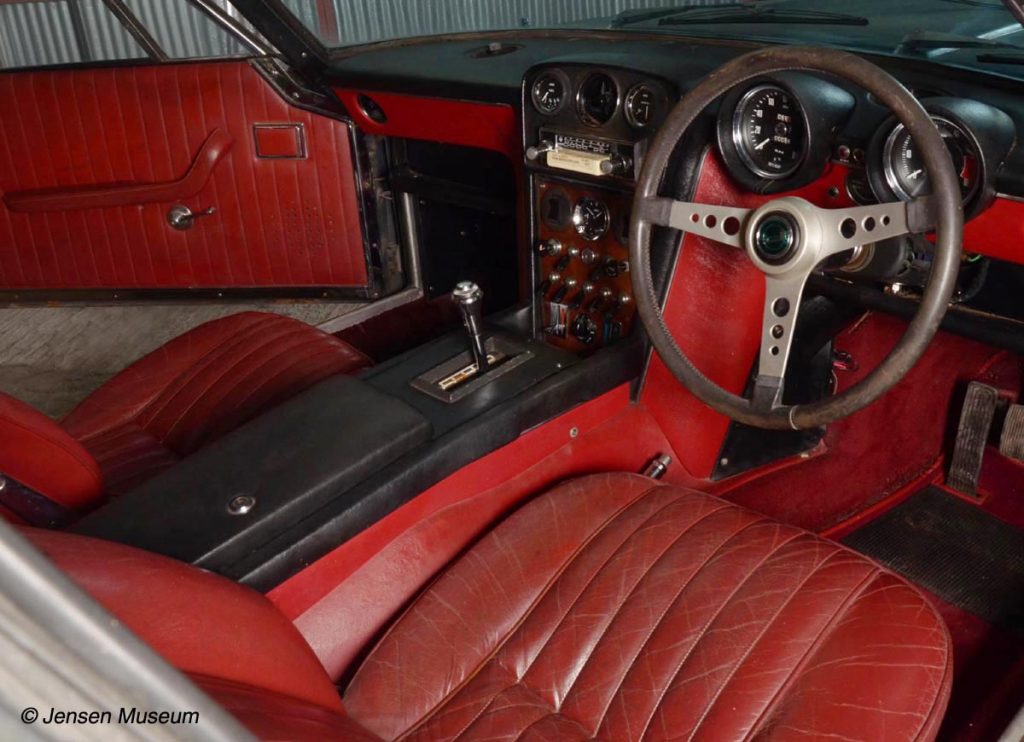 The same view showing the interior to 119/117. Slight trim anomalies confirm the seats remain exactly as they were fifty years ago. In particular one of the pleats to the driver-seat base (left-hand side) is slightly smaller than the others. This trim anomaly can be seen in the 1969 photograph.

Close-up photograph of 119/117 taken in 1969. The car has had the yellow continental headlight covers attached for the journey. 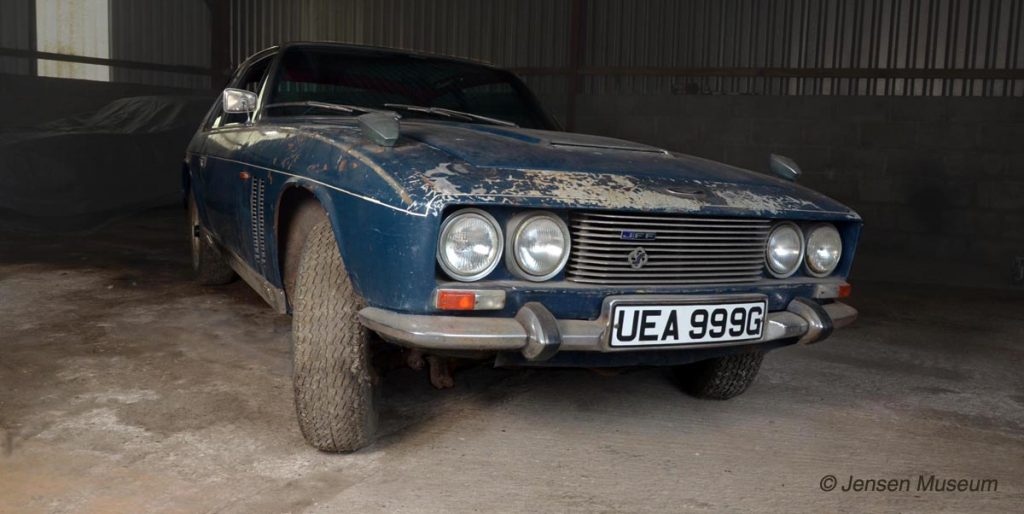 Replicating the same angle of Dvoretsky’s traction test in 2019. 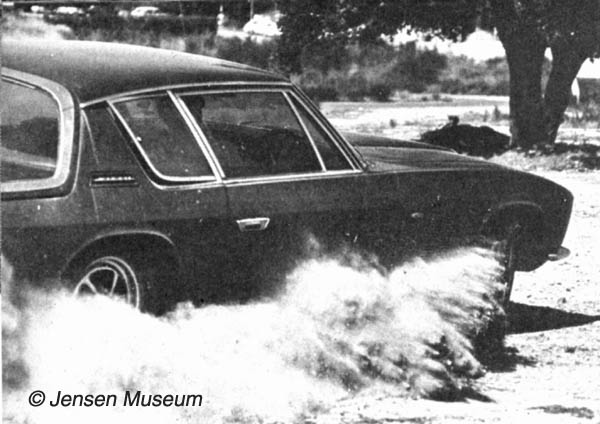 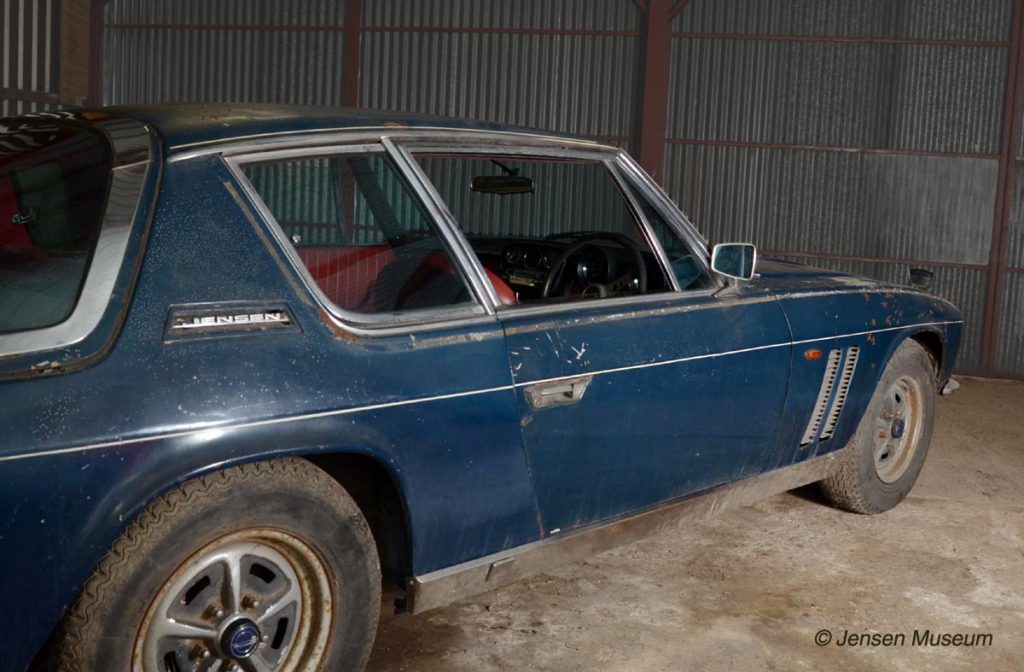 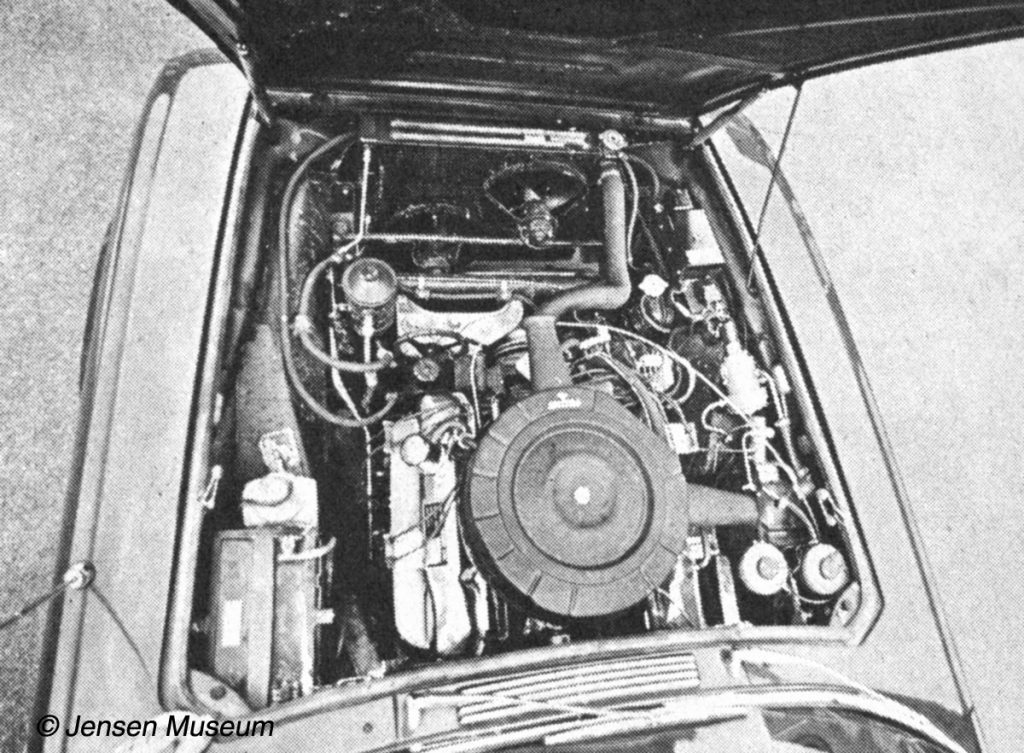 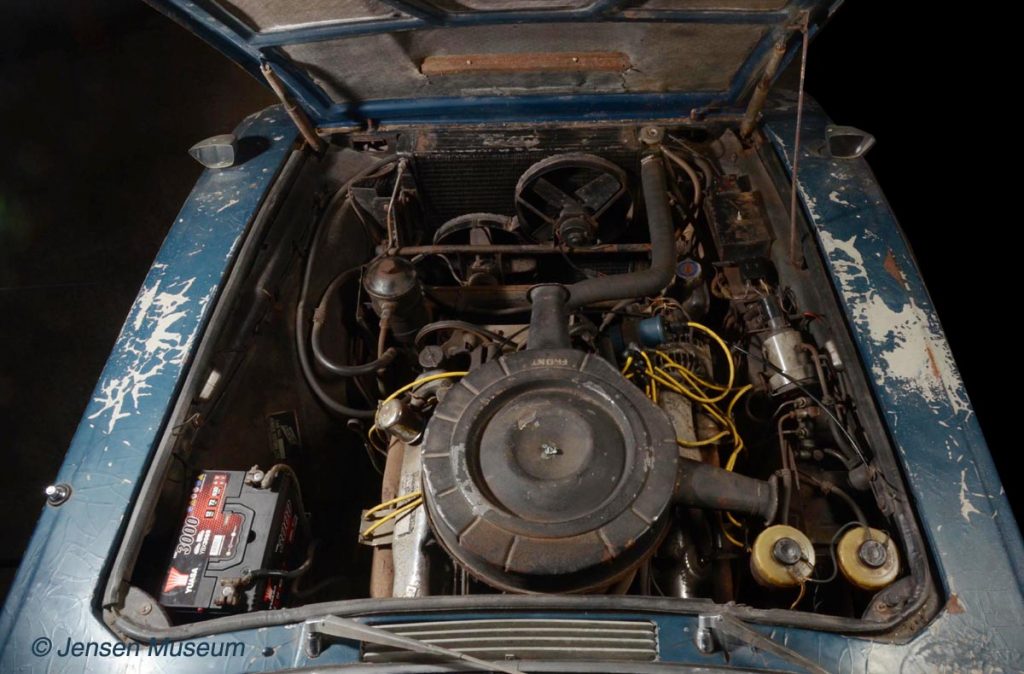 Almost the same view taken in 2019. The engine-bay remains in remarkably original condition. Even the white painted ‘FRONT’ designation remains on the black crinkle finished air-can. In fact the only discernible difference is the lack of washer jet reservoir, which would have been mounted to the battery cage. The wing mirrors went onto the car in 1972. 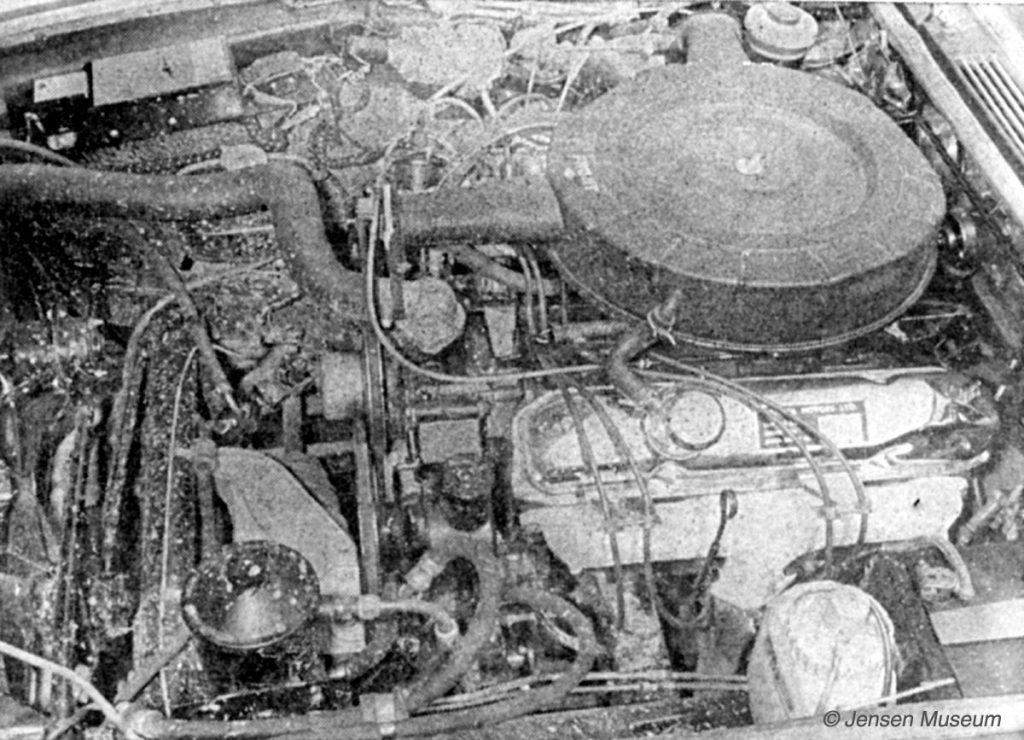 View of the engine-bay from the passenger-side taken in 1969. 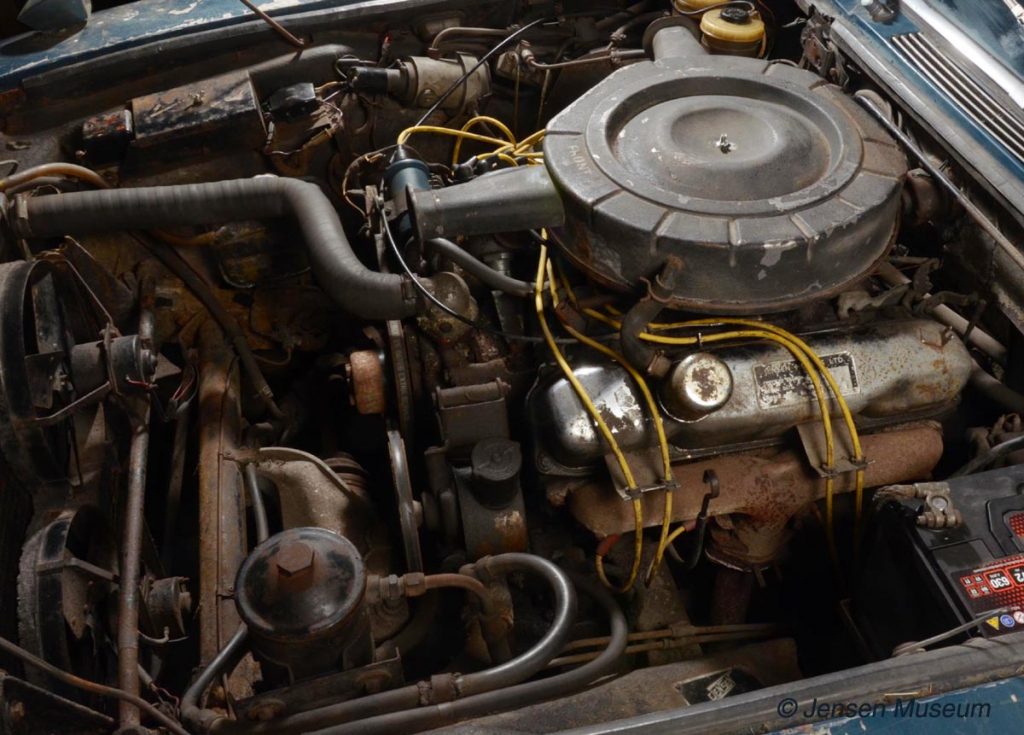 Having completed its duty as a demonstrator, 119/117 was sold to the Jensen distributors, Freckleton Services.  They in turn sold the car to Keith E.G.Maxey in 1970. He owned DAC Air Services Ltd, based at London Airport (later re-named Heathrow Airport). Maxey kept 119/117 until 1972. 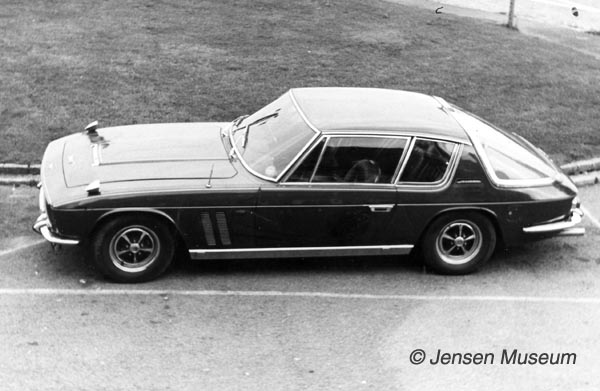 This photograph was taken in 1972, while under the ownership of Maxey. Wing mirrors had been added to the car, along with white coach lines. 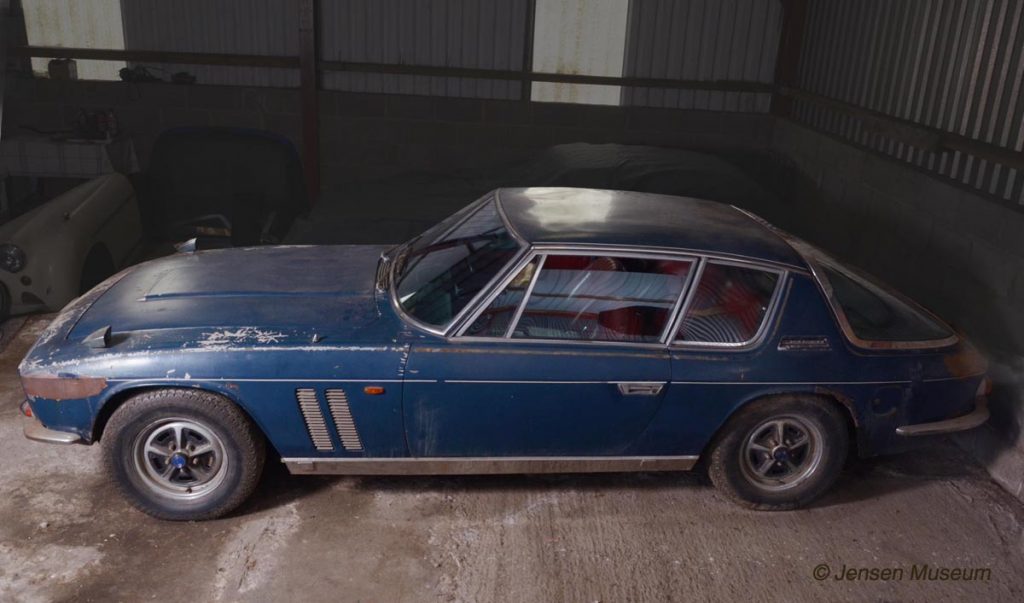 Maxey kept 119/117 until 1972, putting a private registration on the car during his ownership. Maxey  traded or sold the car with R.D.Pocock, a secondhand car dealers in Reading.

In October 1972, 119/117 was purchased from R.D.Pocock for £2,800 by Douglas Smith. He ran the local garage and petrol station in Fyfield village. In fact Smith’s Fyfield garage sticker remains in place to the base of the rear tailgate glass.

119/117 was kept within Smith’s garage during his ownership. By the later 1970s, and due to ill health, Smith no longer used the Jensen. The car remained stored in his garage until he died in 2003.

After Smith’s death, the car remained exactly where it was until his wife died in 2006. The car was acquired in 2007 for the Jensen Museum.