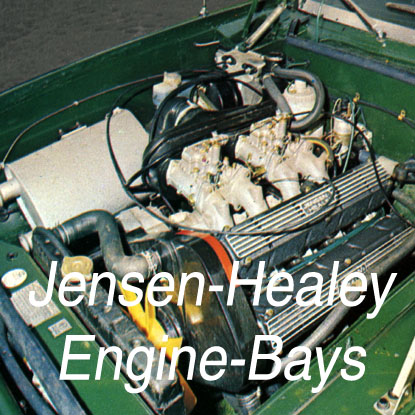 The quest for originality can be demanding, particularly when correct detail is important. One feature of a Jensen which takes time and expertise to get just right, is the engine-bay. Many decades have elapsed since the cars were first built, and in that time all manner of detail may have been changed. The engine-bay of the Jensen-Healey hardly changed over the period the car was in production, which does simplify things for the restorer.  The Museum looks at the detail of a Jensen-Healey engine-bay.

The Jensen-Healey is fitted with the 1973 cc Lotus 907 dual overhead cam, 16-valve all-alloy engine. This multi-valve engine is the first modern dual overhead cam 4 valve per cylinder engine to be mass-produced on an assembly line. This setup puts out approximately 144 bhp (107 kW), topping out at 119 mph (192 km/h) and accelerating from zero to 60 mph in 7.8 seconds (8.1 seconds for the emission controlled U.S. version). The engine is canted over to one side, which allows a lower bonnet line. The twin cam covers are made in cast aluminium with the Jensen-Healey name to the top. The top fins are in exposed aluminium, along with the name, the rest of the casting is finished in black crackle finish. The same style of cam cover was also used by Lotus with their name to the tops. The Lotus cam covers were never installed to engines fitted in a Jensen-Healey, although some owners have changed the Jensen-Healey covers in favour of the Lotus-branded covers.

Model expert, and former Jensen-Healey Registrar, Jensen Owners’ Club,  Dr David Booth, believes the first 200 cars had the bracket holding the air-can to the body with a welded centre section. 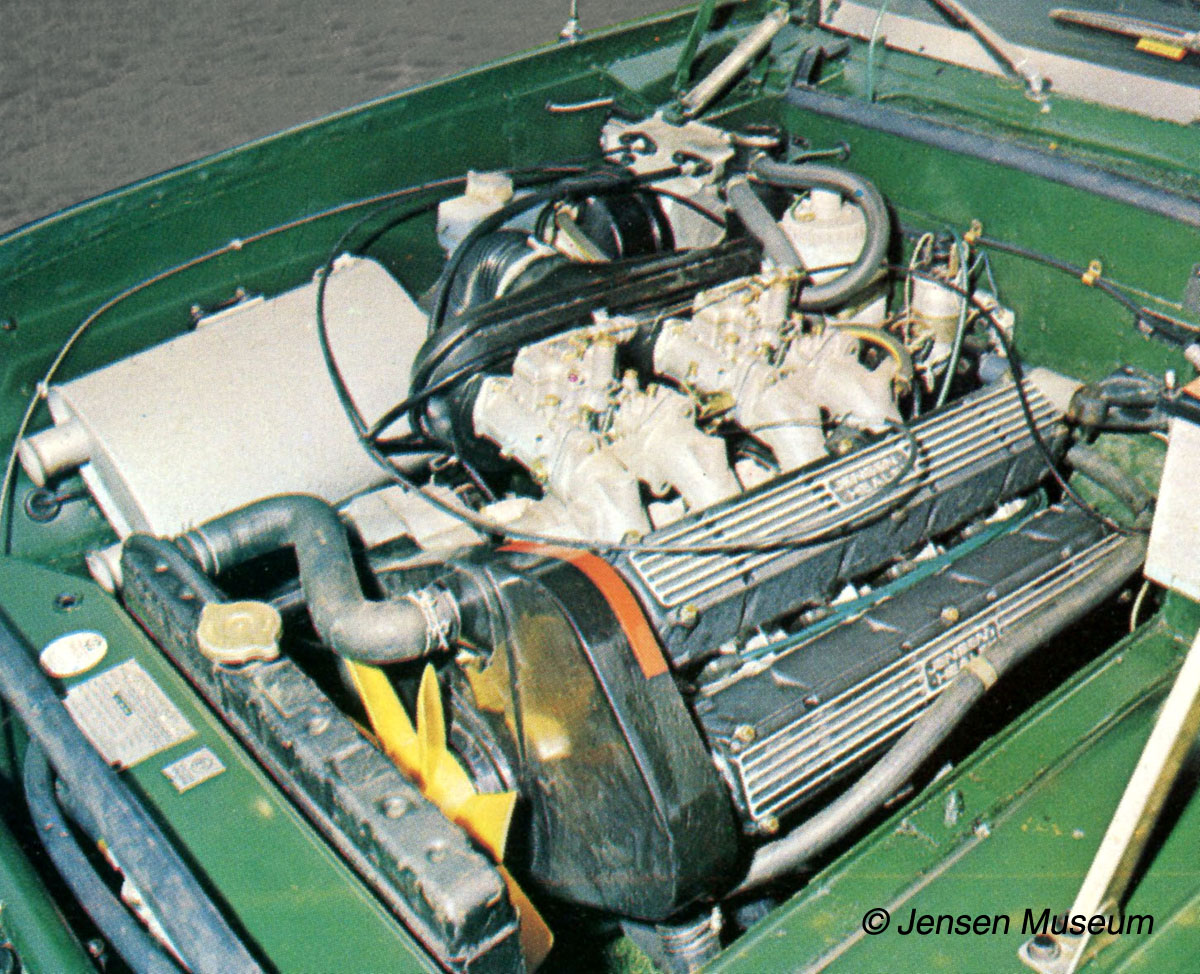 Jensen-Healey, chassis number ‘10042’ has been restored by model expert, Dr David Booth. His remit in regard to the car, has been one of originality. 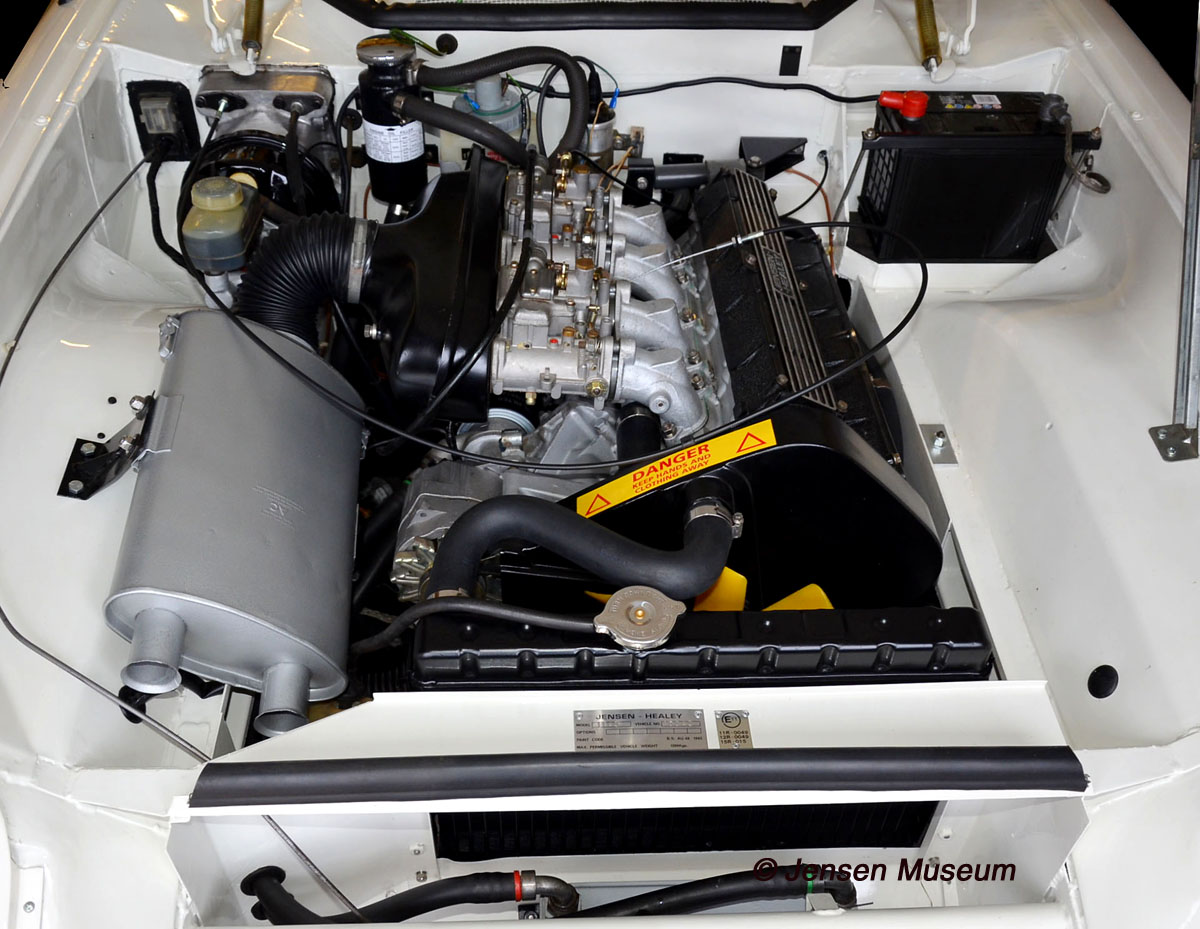 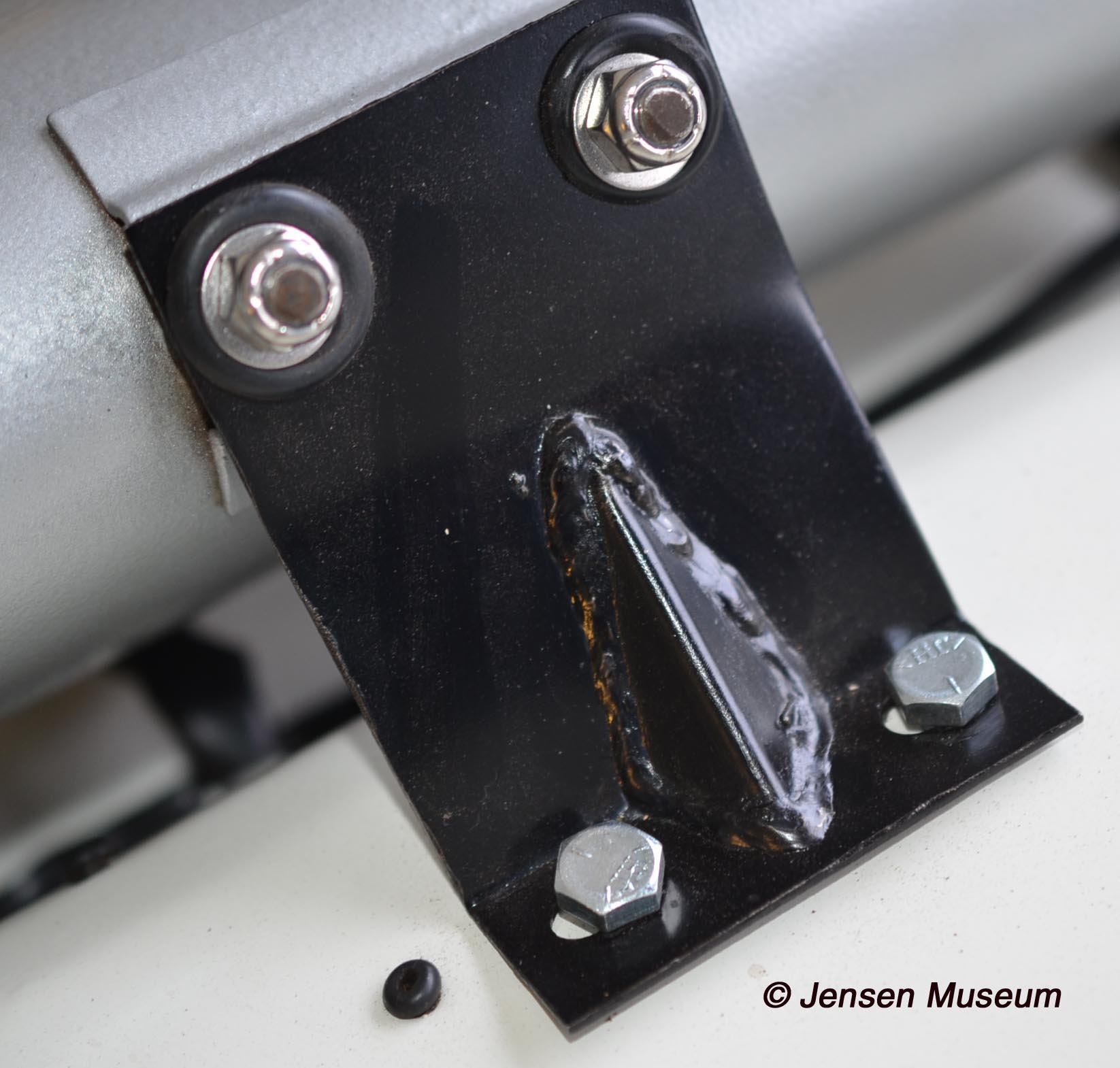 Bracket holding the air-can to the body. Booth believes the earliest cars (first 200 or less) had a bracket with welded centre section. Later cars had a purpose pressed bracket. 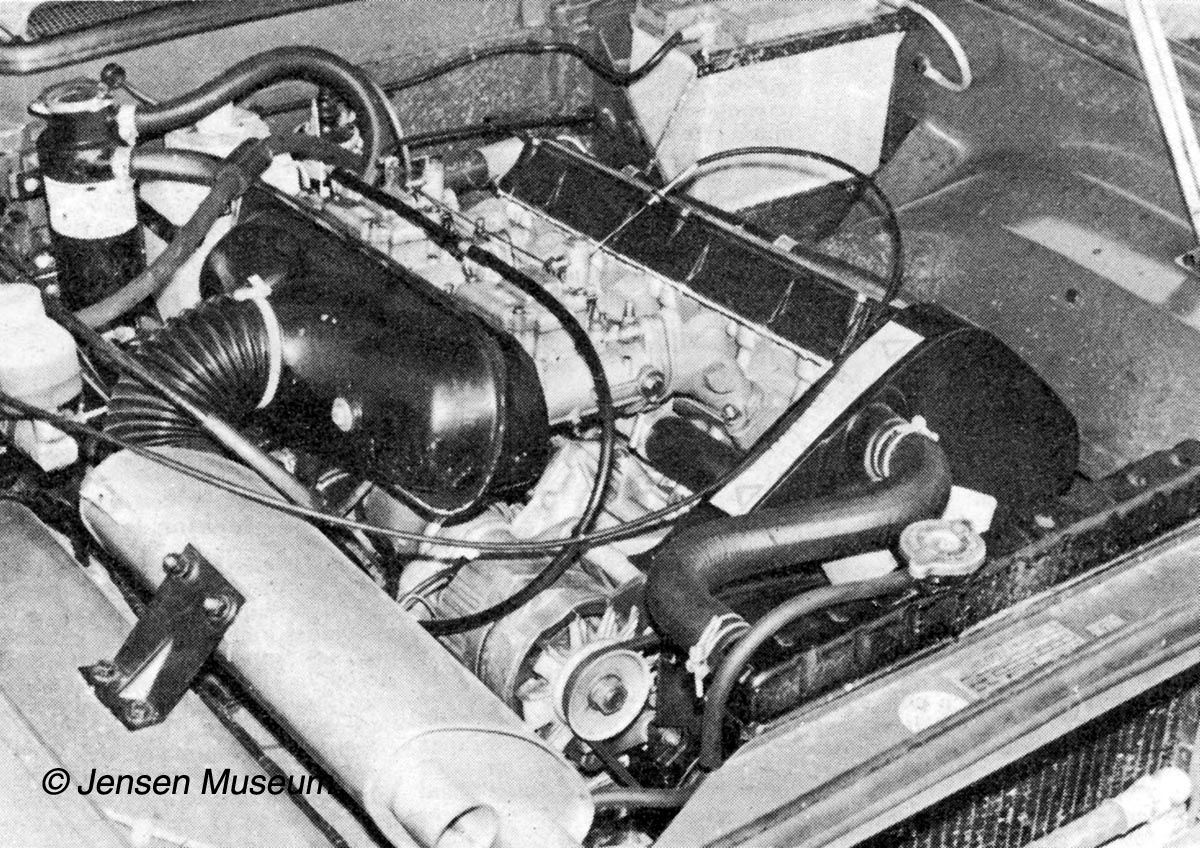 Engine-bay of Jensen-Healey chassis number 10619. The car was registered as OEA 464L and used as a factory demonstrator. The air-can bracket is of standard pressed manufacture. 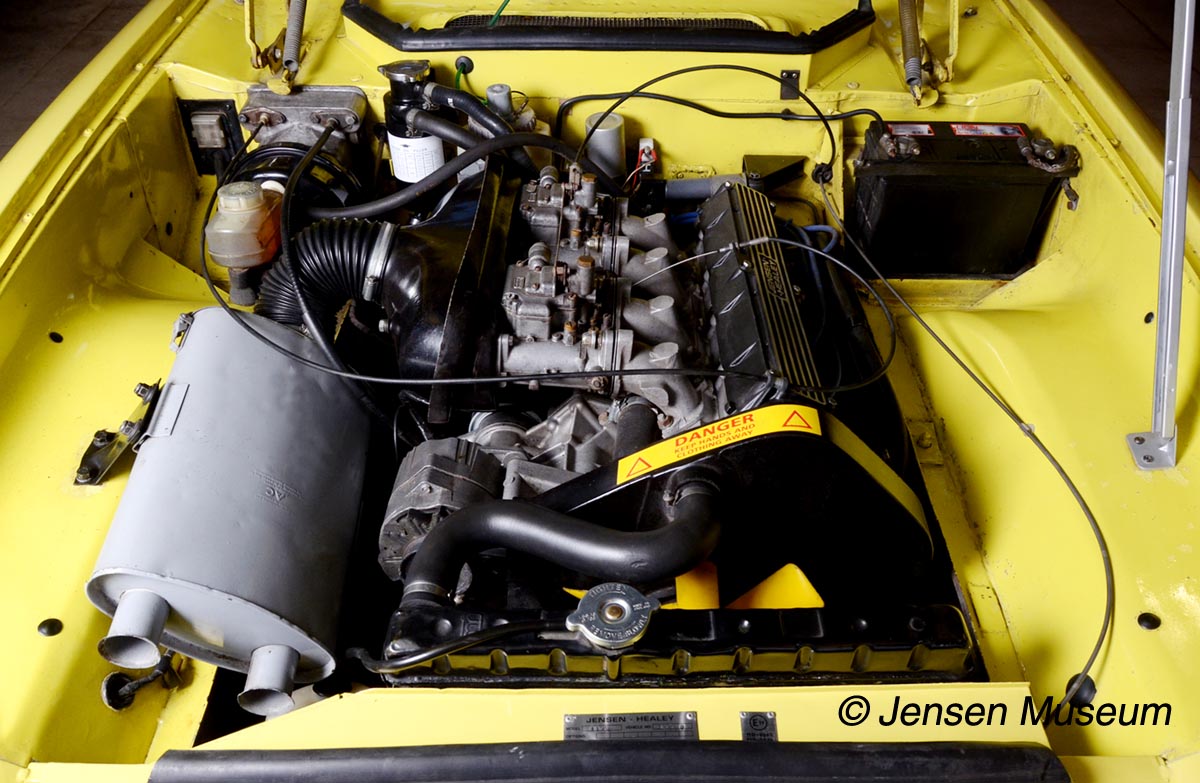 Overview of the Jensen-Healey engine-bay to car ‘12708’. This low mileage car (now a part of the Museum collection) has never been restored, so the engine-bay remains particularly original. 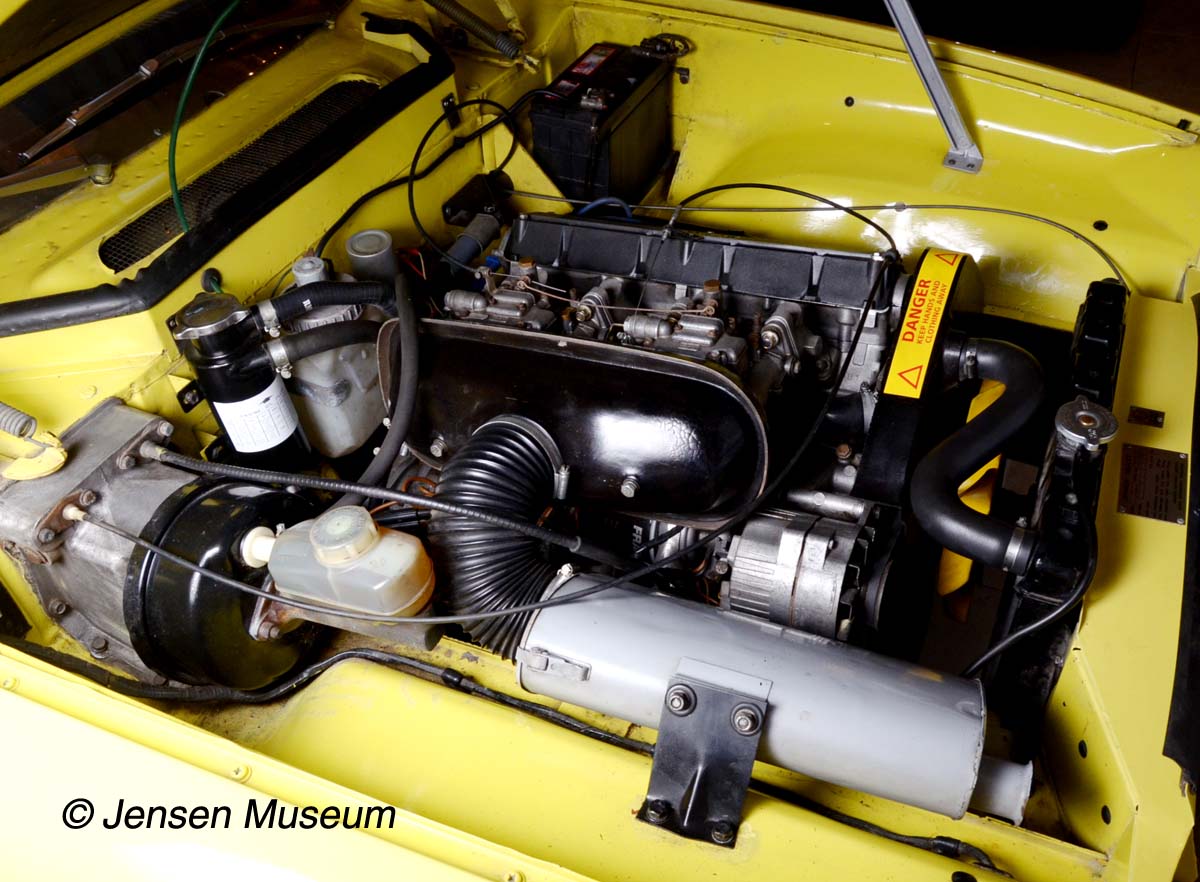 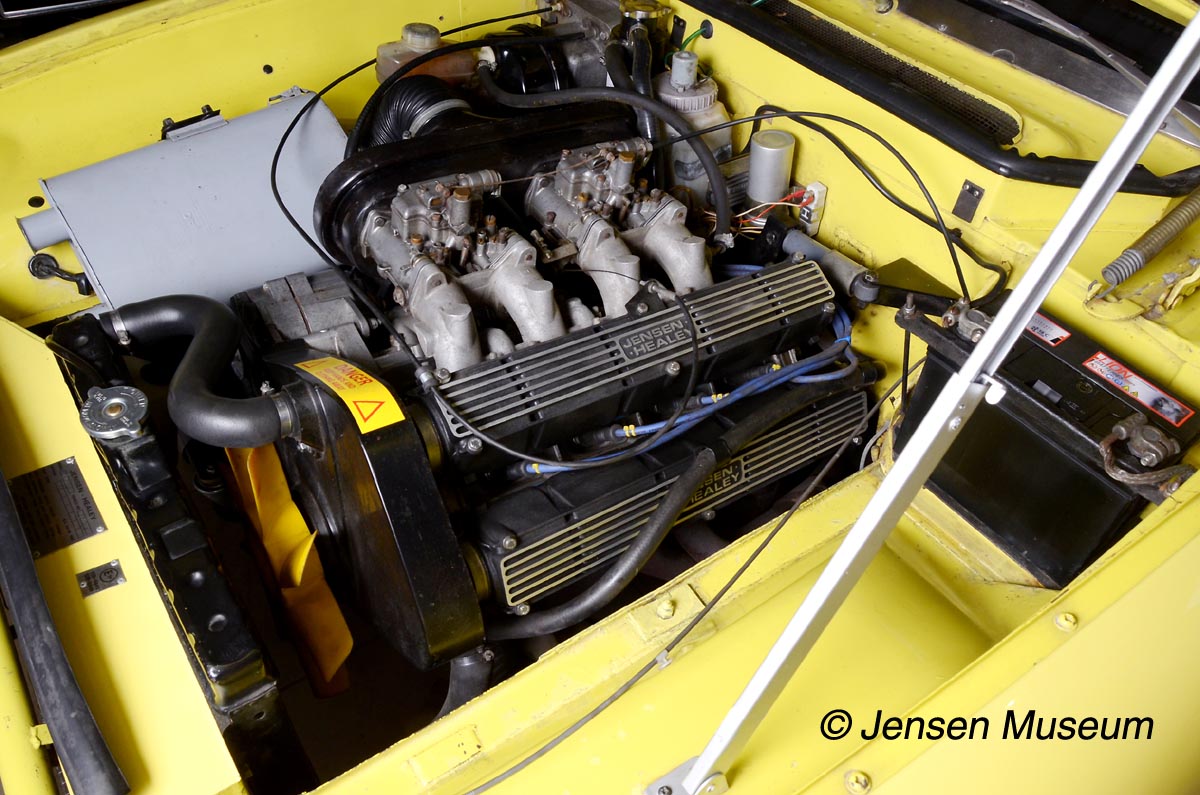 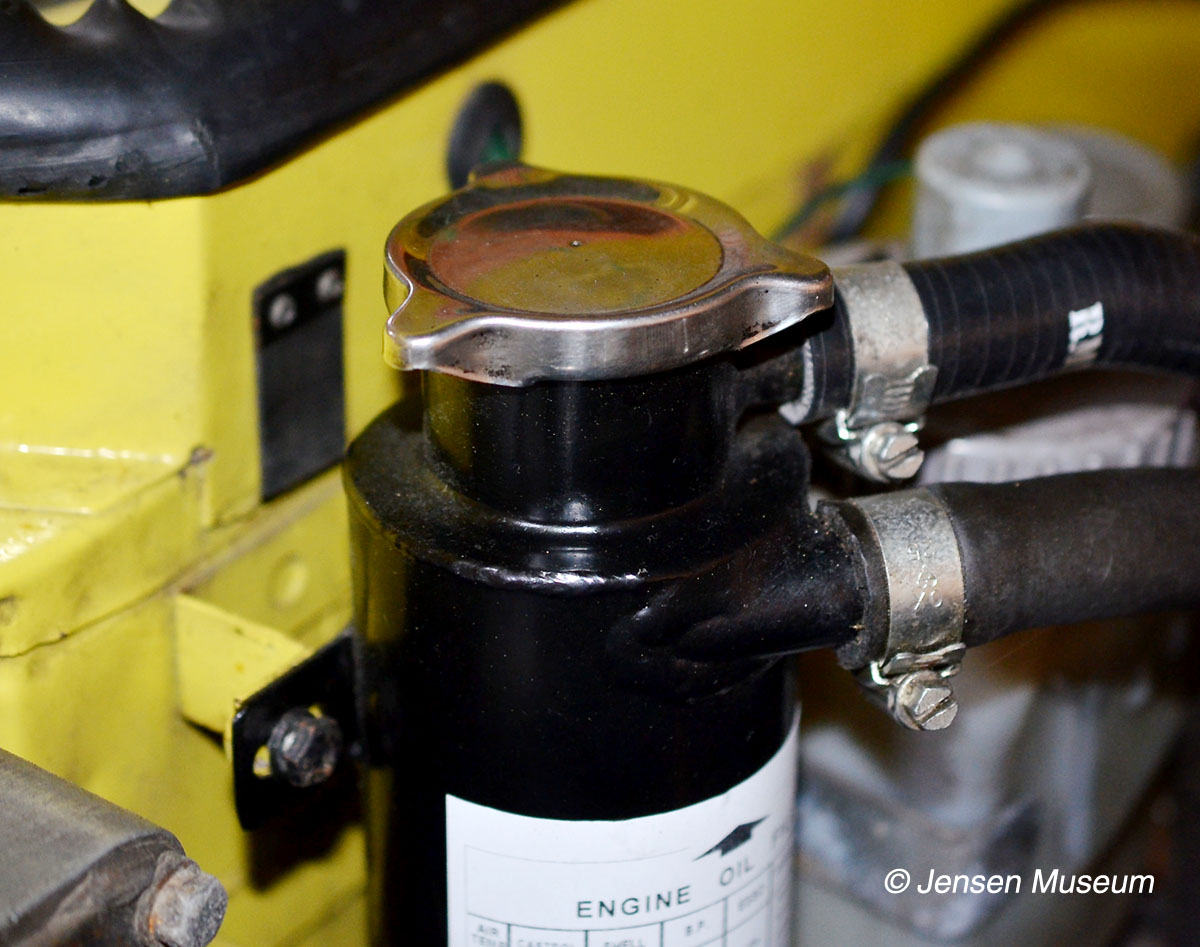 The oil filler can to Jensen-Healey chassis number 12708. Typical form with three pressed out holding points to the filler cap. 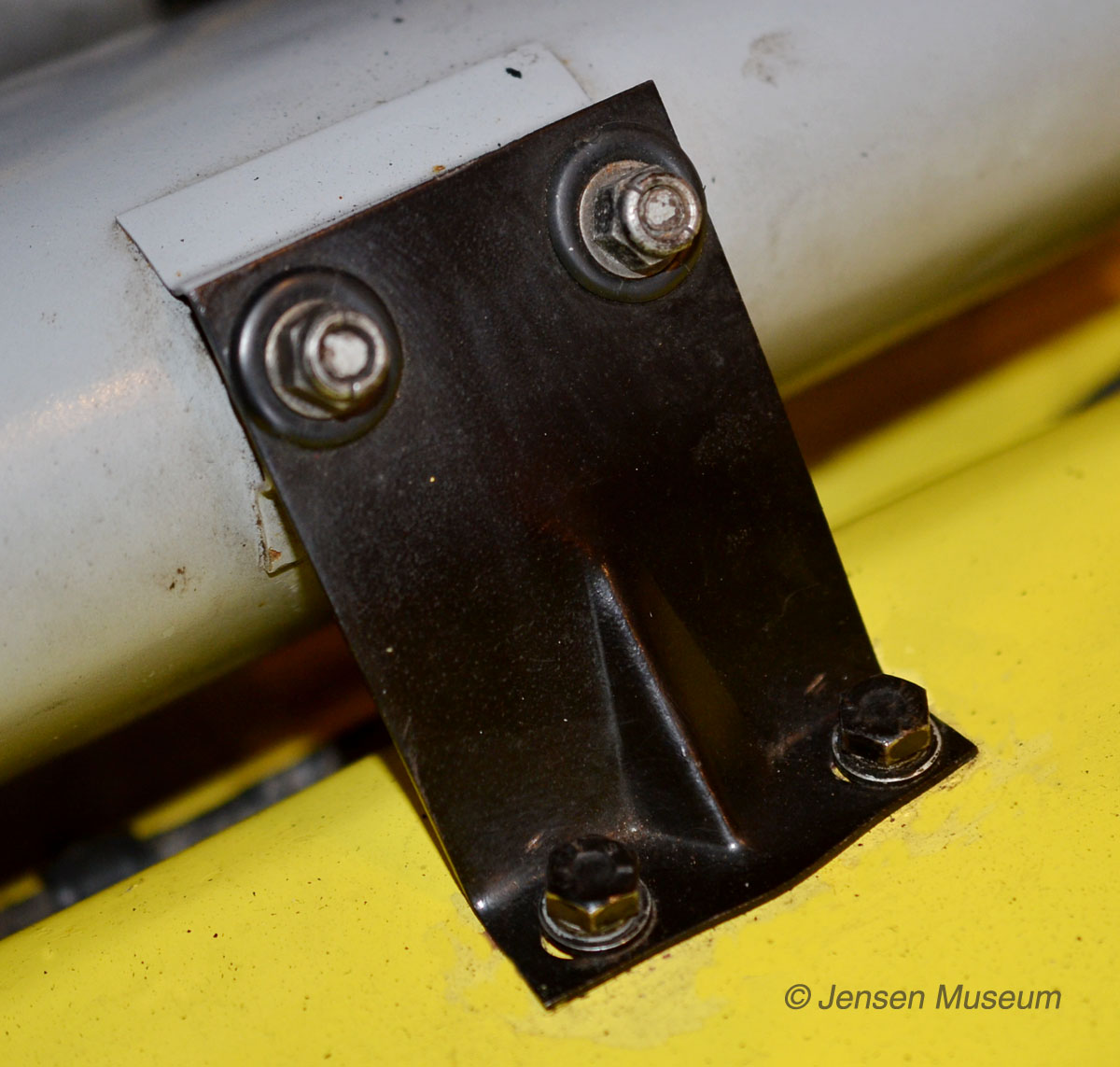 The air-can to body bracket on Jensen-Healey ‘12708’. After the initial batch of cars had been completed, this bracket was pressed out, rather than having a welded central support.

The Jensen-Healey engine-bay remained largely unaltered throughout the model’s life. Just into MK.II production a revised cam-belt cover was fitted. The new cam-belt cover was of two-piece construction.  Jensen historian, Richard Calver, states this change ocurred from engine number ‘4110’. This being the case, the change to the two-piece cam-belt cover took place in October 1973.

There had been many complaints (particularly from the motoring press) about the length of time required to take the earlier cover off. Motoring journalist, Michael Scarlett, stated the best option was to the leave the cover off. Jensen Motors took the complaints on board, and designed a new two-piece cover. The top part of this new cover could be quickly unbolted, allowing for a cam-belt change. Other minor changes came during late MK.II production, with a viscuous coupling being fitted to the radiator fan, and a revised heater valve assembly, which was fitted between the rocker covers. 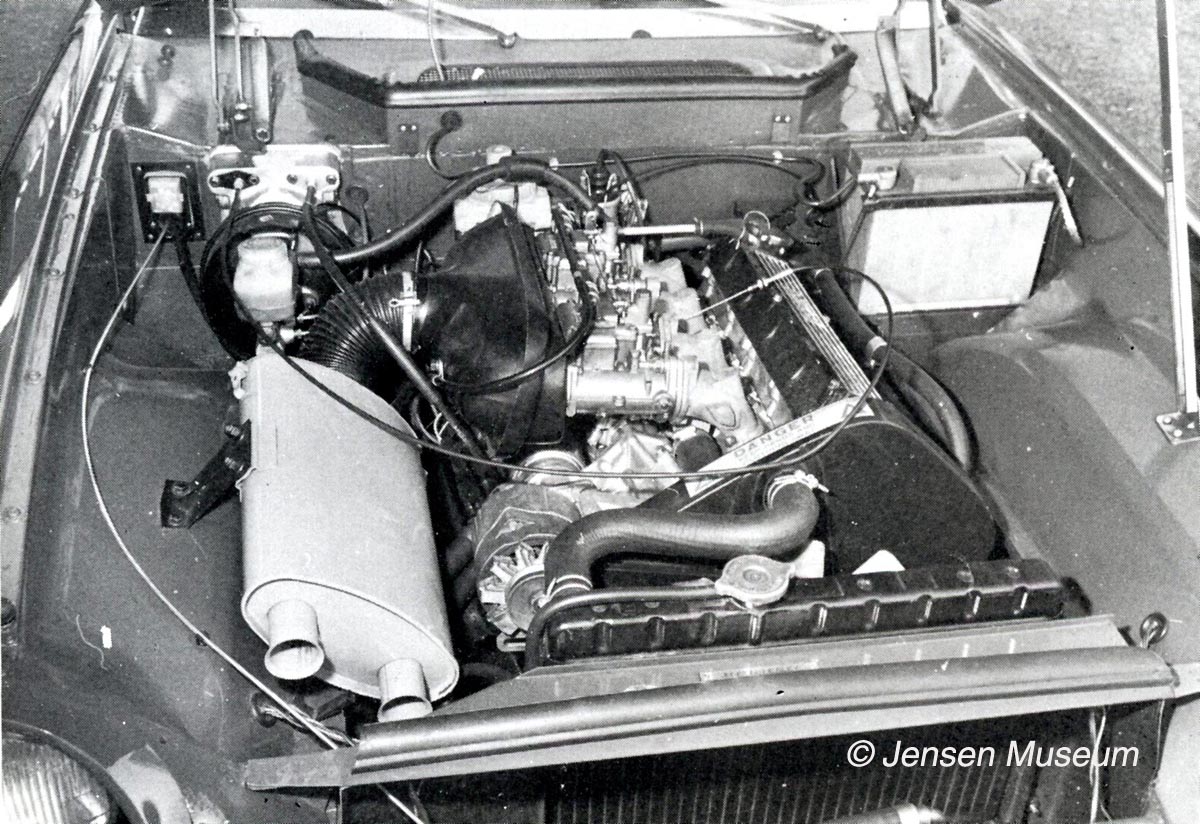 Factory demonstrator VEA 224M (chassis number 13,568) was one of the early generation of MK.II cars. At this stage, cars still had the MK.I type cam belt cover. Although the Oil filler was now on the rocker box cover. 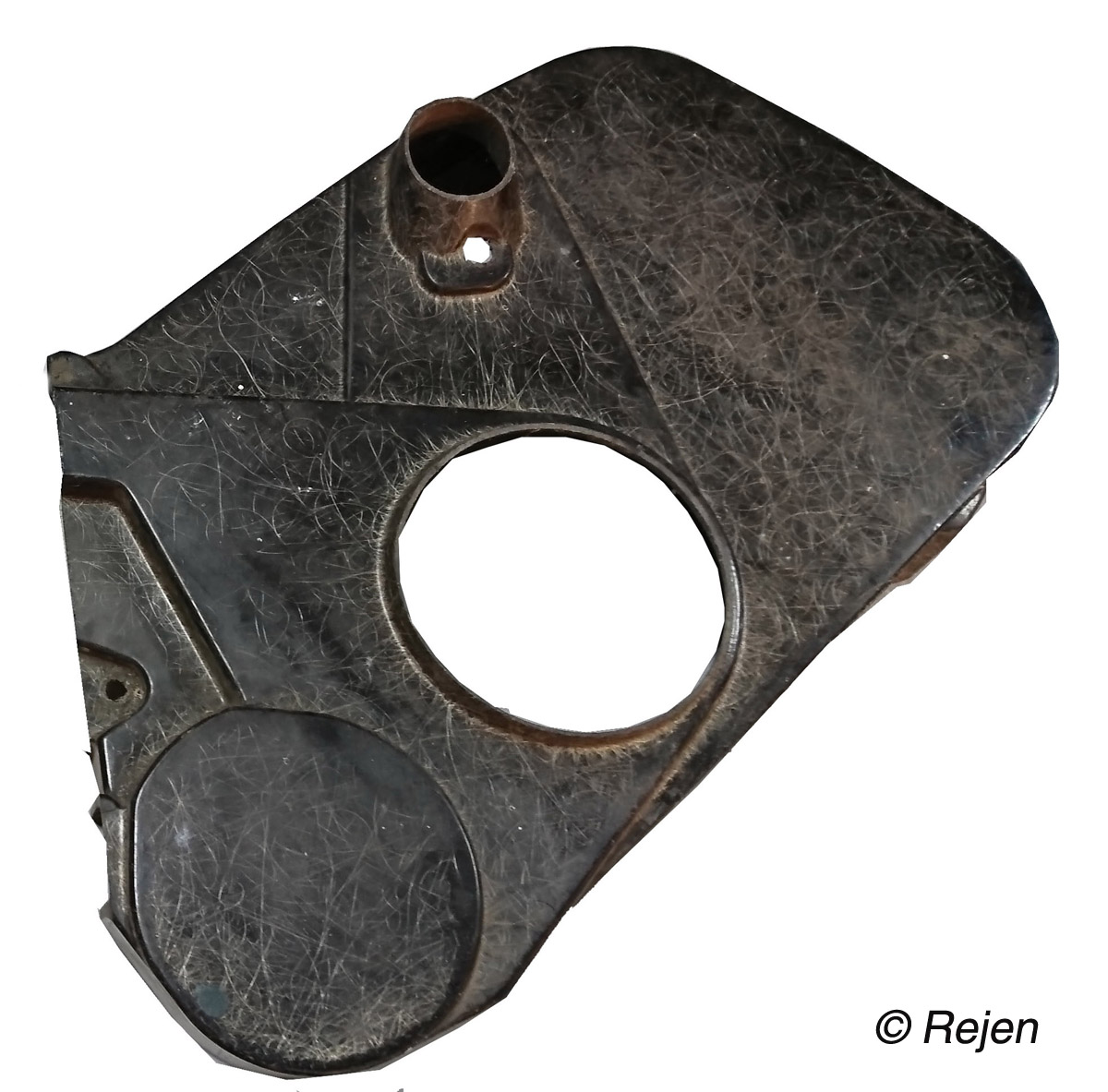 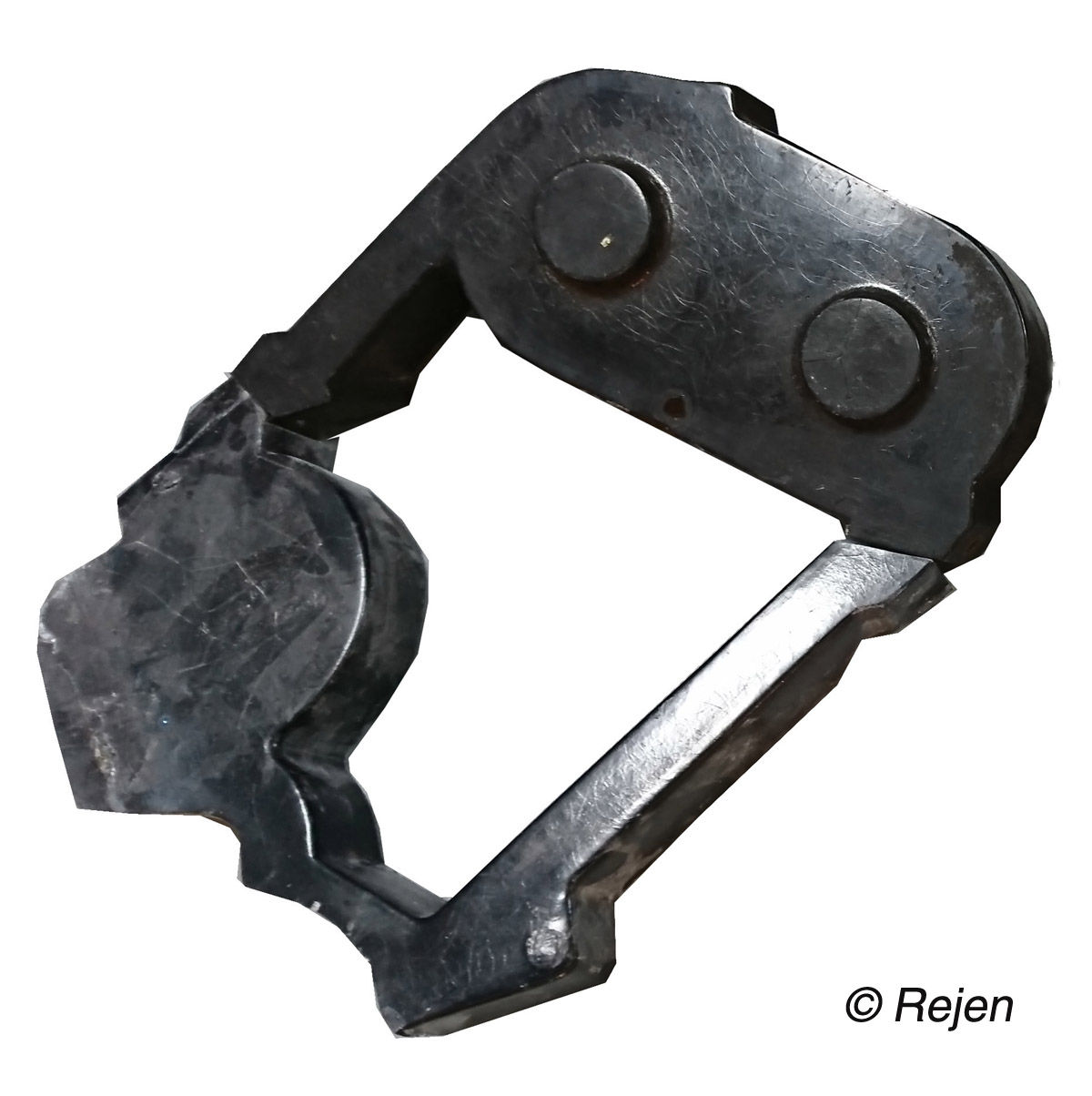 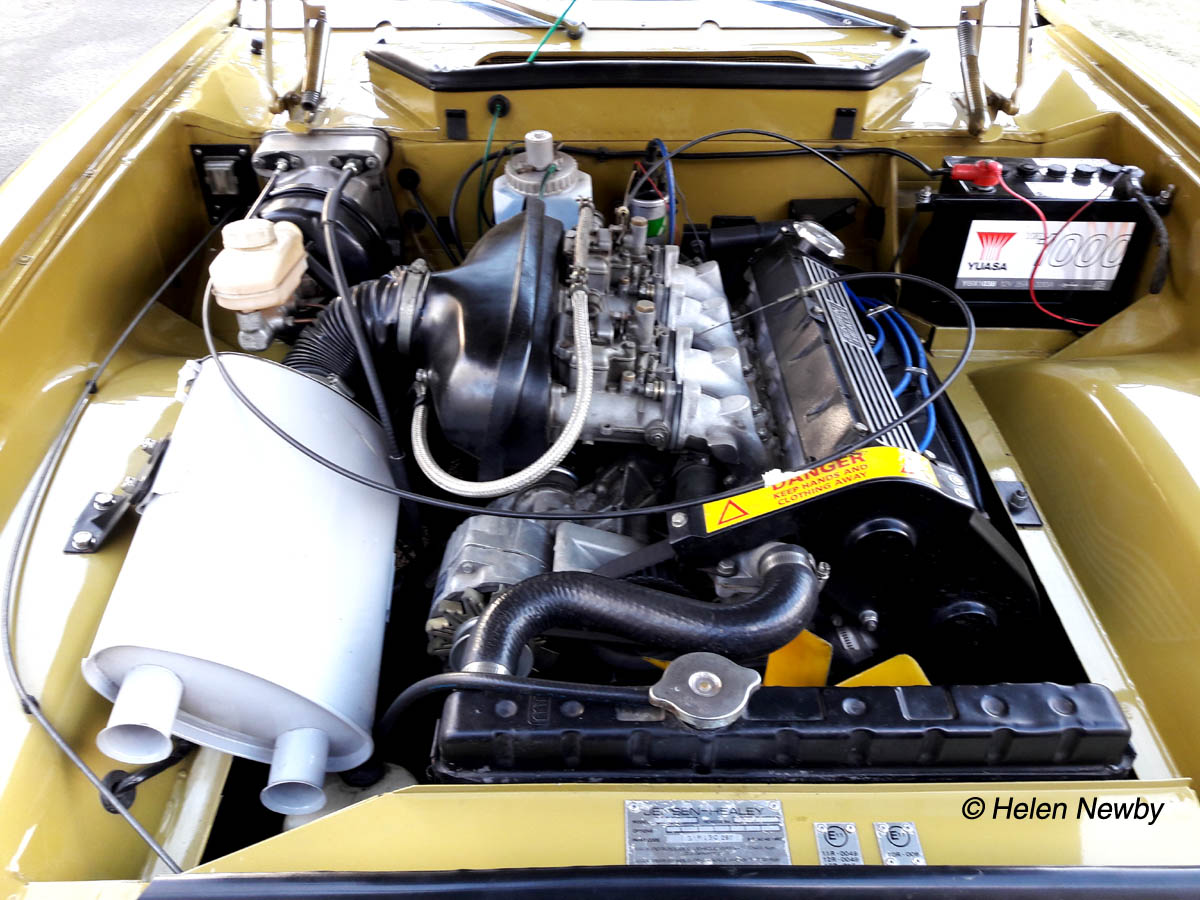 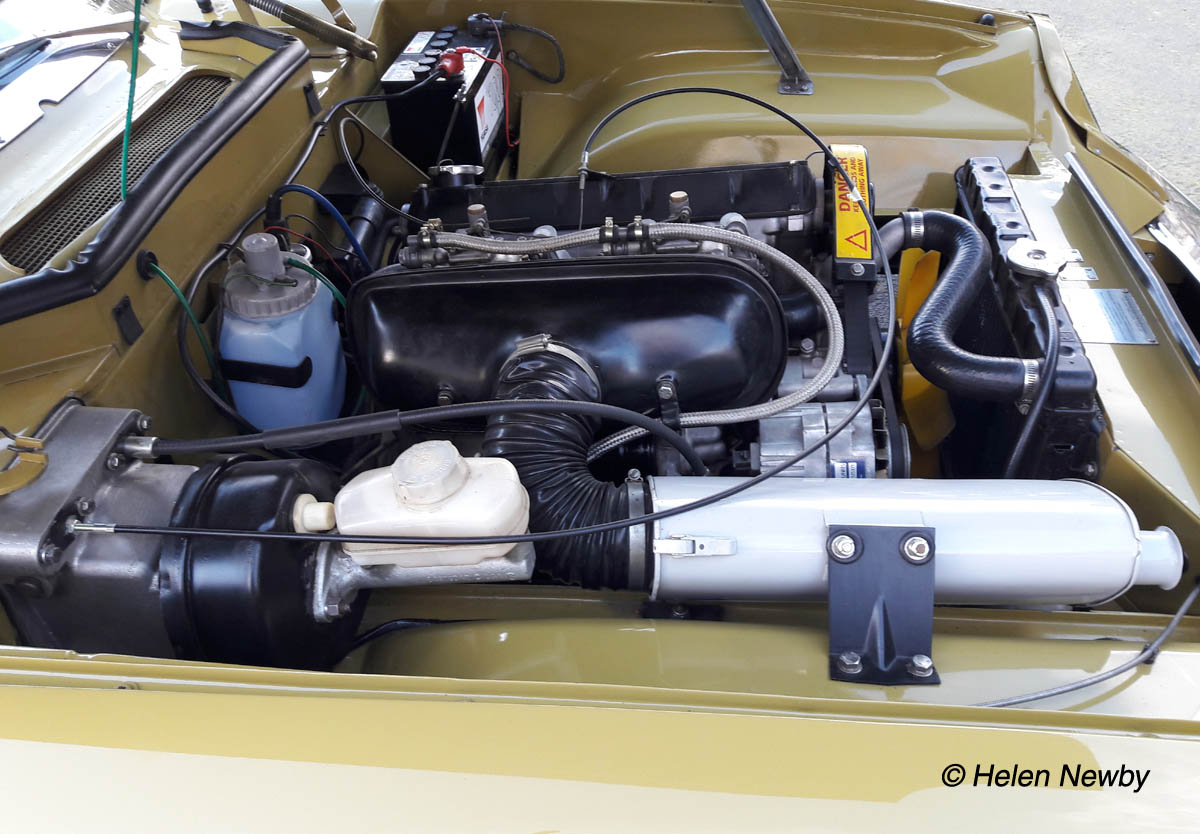 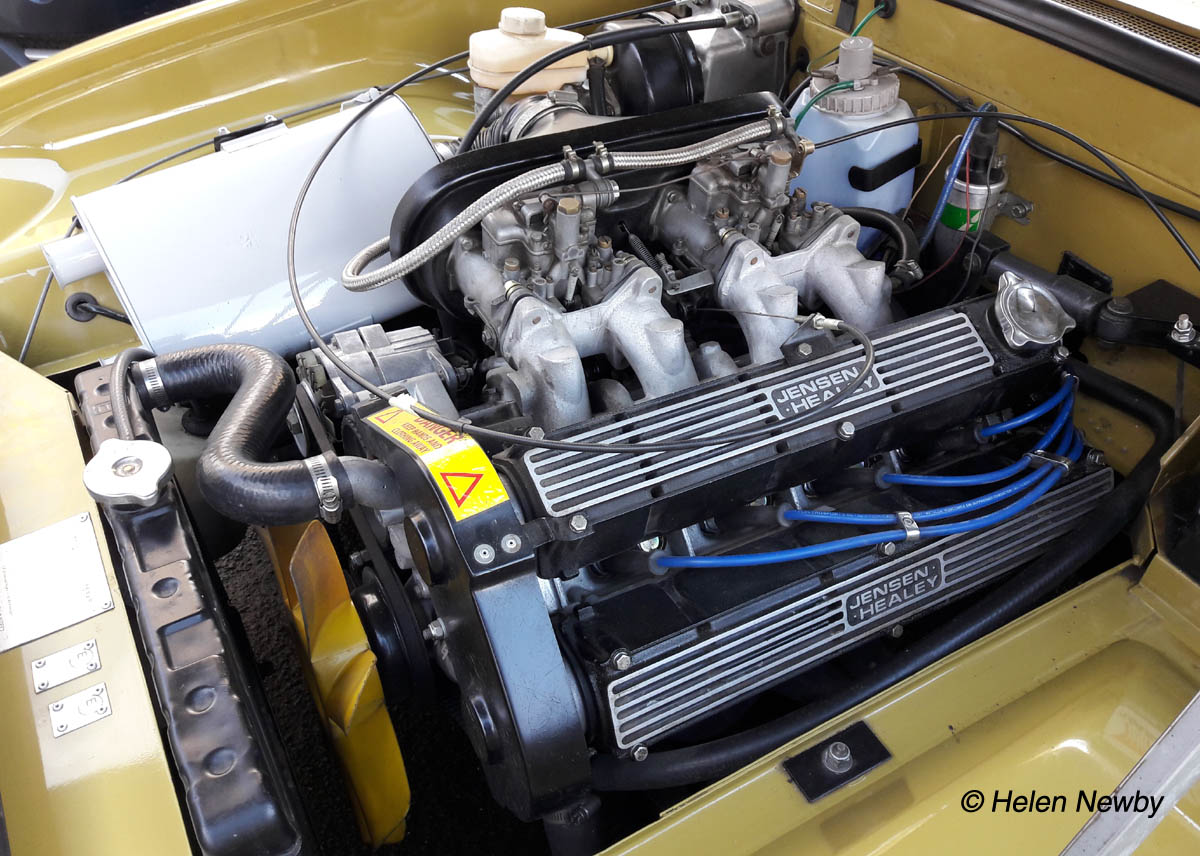 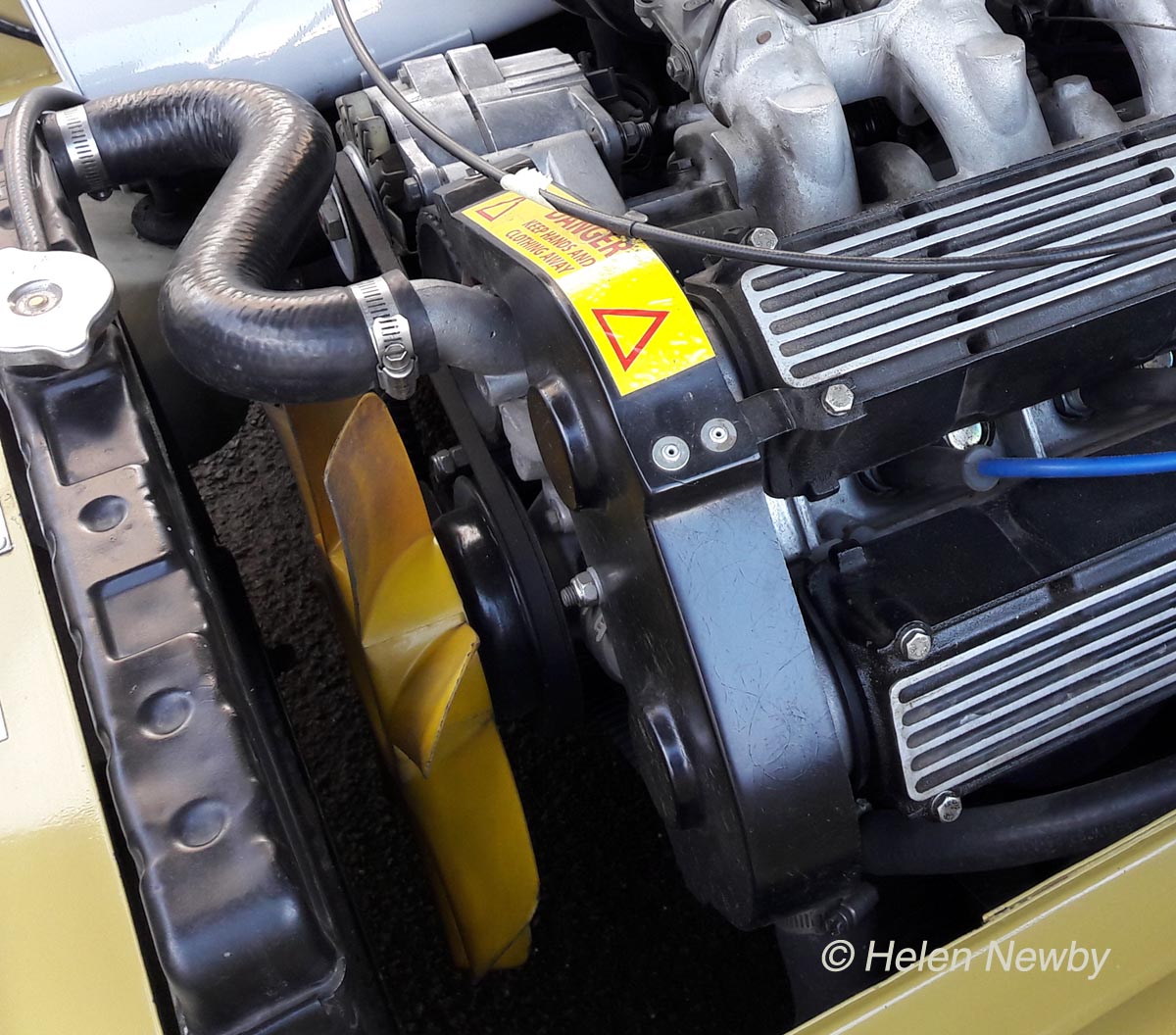 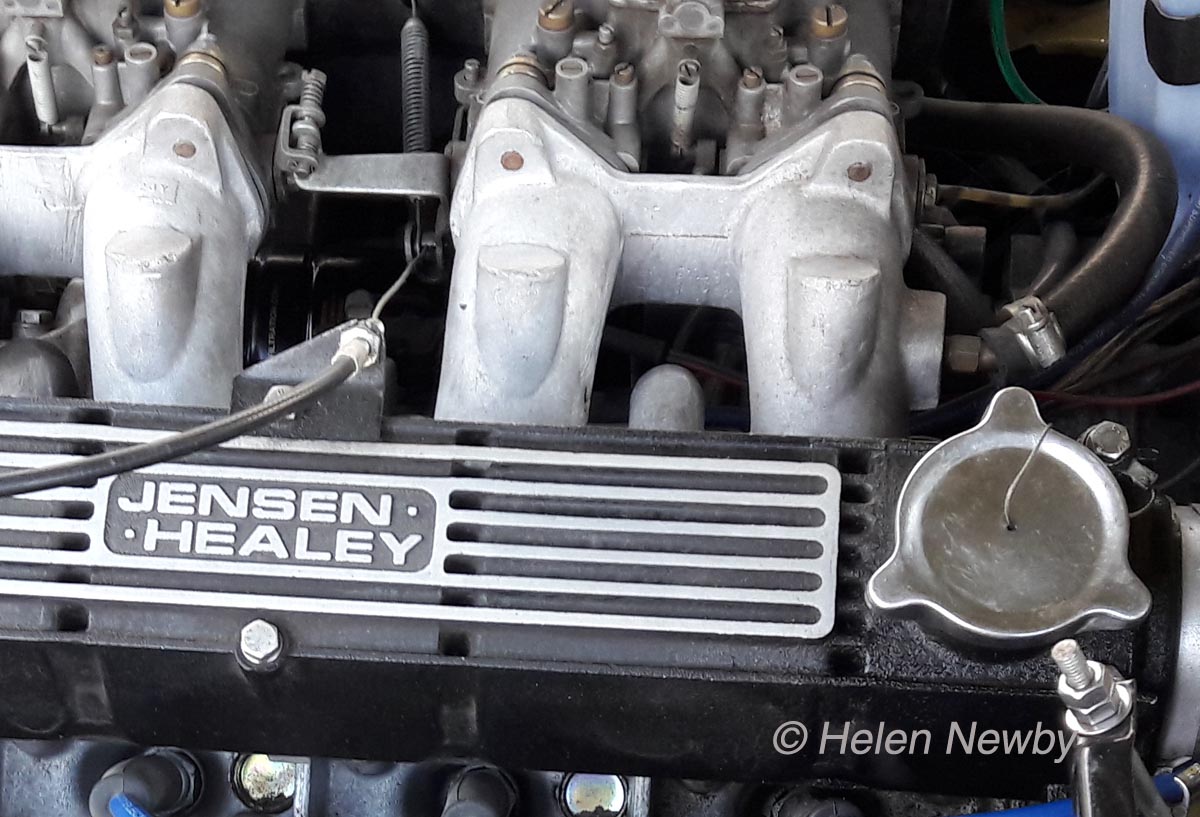 Detail photograph showing the oil filler to the rocker-cover on ‘15346’.

Engine-bay of a LHD US Specification Jensen-Healey.This is typical of early to middle  generation MK.II engine-bays

A period publicity photograph of a LHD American market MK.II Jensen-Healey engine-bay. Typically the engine has dual side-draft single-throat CD175 Zenith Strombergs.The car has the MK.II two-piece cam-belt cover. Mounted over by the battery is the black charcoal filter can, required for emissions in the US market. 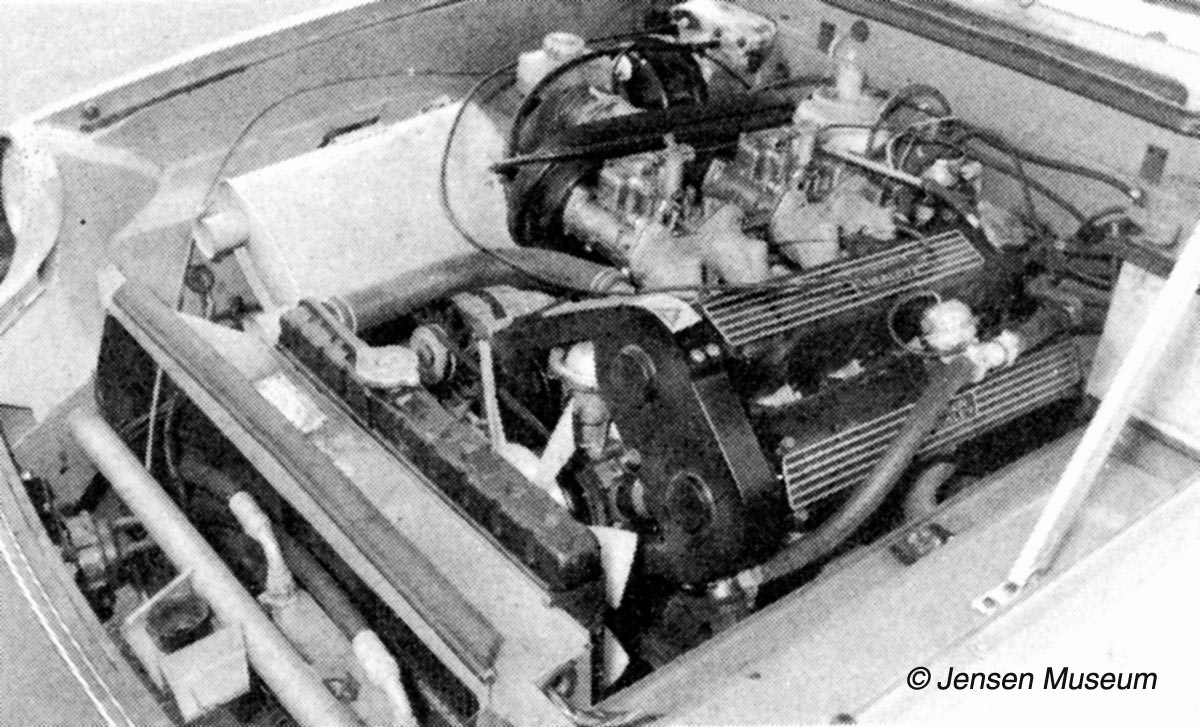 Engine-bay of a late Jensen-Healey (chassis number 19109). This car, completed in November 1974, was registered as GNX 578N, and used initially as a factory demonstrator. These late manufactured Mk.II cars had the 5 speed gearbox, and the engine had a front fan with viscuous coupling. The silver metal section seen between the rocker covers is a heater valve, allowing the interior heater to work more efficiently.