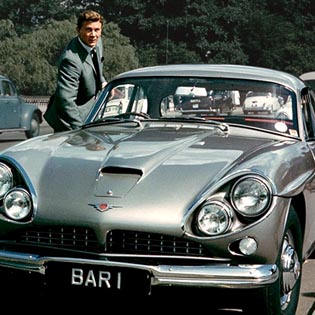 The Baron, was a much-loved television series from the 1960s. To those that have watched the series, a grey Jensen CV8 stole the show, being used copiously throughout the series, by actor Steve Forrest. He played the part of John Mannering, the antiques dealer come spy.

Bearing the number plate ‘BAR 1’, the oyster grey Jensen was an up-market follow on from the Volvo P1800 Sports, used by Roger Moore, as Simon Templar in The Saint. The Museum looks at the history of The Baron Jensen CV8.

Johnny Goodman of New World Pictures placed an order with Jensen Motors for a Jensen CV8. Chassis number 104/2303 was assigned to Goodman’s order, with a specification of oyster grey with bright red leather trim, and with carpets in beige with bright red edging.

Goodman managed to negotiate a deal direct with Jensen Motors, rather than going through one of the official distributors. This wasn’t normal, and probably was allowed when Goodman mentioned about using the car in a television series.

Other car companies were known to give cars away free for that type of advertising, Jensen Motors didn’t go down that path, but would sometimes agree to a negotiated price. It would seem logical that Goodman had tried initially to get a CV8 for free, as indeed he had previously managed with Volvo.

Senior staff at Jensen Motors would undoubtedly have been aware of Johnny Goodman. Back in 1961, he had been the Production Supervisor on the television series, The Saint, starring Roger Moore. He had contacted various car companies, but Volvo made an offer he couldn’t refuse. 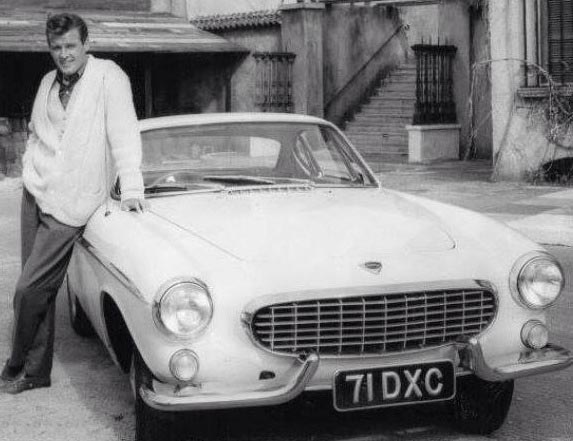 Roger Moore together with the Jensen-made Volvo P1800. Off set, Moore drove the car with its assigned number ’71 DNX’. When used for filming, the car sported ‘ST 1’ plates.

Volvo agreed to give Goodman two of their brand new to market Volvo Sports P1800 cars. The cars would be given free, providing they were used in  the television series. Goodman had asked for two, so that one would be used as a complete entity during filming, the other would be cut in half for studio sequences inside the car.

Although the Volvo P1800 was owned by the studios, the complete car was given over to Roger Moore to use off-set, and it was Moore’s name that showed on the registration document as the keeper of the car.

If Goodman gave over the Jensen CV8 to his American leading actor, Steve Forrest, in the series The Baron, isn’t known. But, it is certainly a possibility.

Although not proof in itself, it gives weight to the argument that Forrest had use of the CV8 off set, later sparking his interest in the Interceptor.

The CV8 was assigned the registration number, ‘CEA 580C’, but as with the  Volvo P1800 bearing the ‘ST 1’ number for filming only, so the Jensen CV8 received the number ‘BAR 1’ for film use. When driven on the roads, the car reverted back to its ‘CEA 580C’ number.

The television series that Goodman was working on was to be entitled The Baron, based on the book series by John Creasey, written under the pseudonym, Anthony Morton.

The Baron series was going to be run in full colour, produced by ITC Entertainment and made at APBC Studios at Elstree. As with The Saint, Johnny Goodman was the Production Supervisor for the new series. 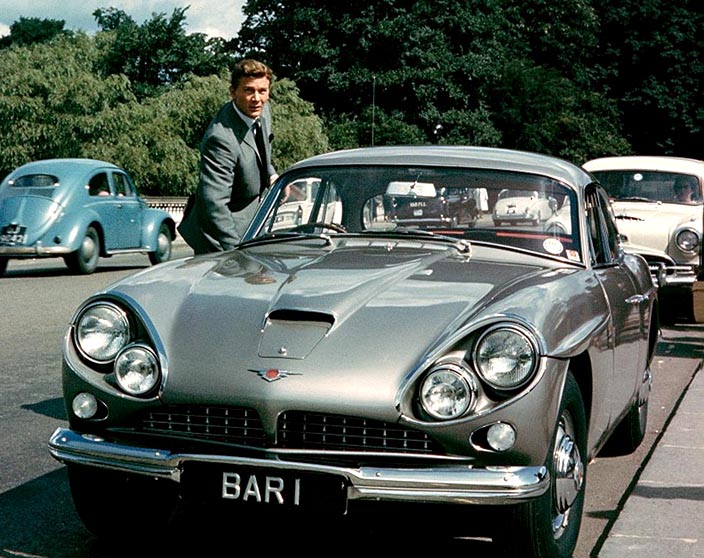 Forrest, was cast as John Mannering, an antiques dealer, and undercover agent working informally for the fictional head of British Diplomatic Intelligence (Templeton-Green). The character of Mannering was similar to The Saint’s Simon Templar, a member of the jet set, whose glamorous lifestyle was typified by the (at the time) still-exclusive air travel to exotic locations.

The background to the fictional Mannering differed from Creasey’s books. Mannering was an American for a start, a bachelor, and his grandfather had a huge ranch outside of Dallas, Texas.

Within the series, the viewers find out that Mannering was a US Army Captain in World War II serving in the Monuments, Fine Arts, and Archives program, where he recovered art works from the Nazis. After the war, the ‘Jet-Set’ Mannering opened three antiques shops, but was kept equally busy working as an undercover agent. 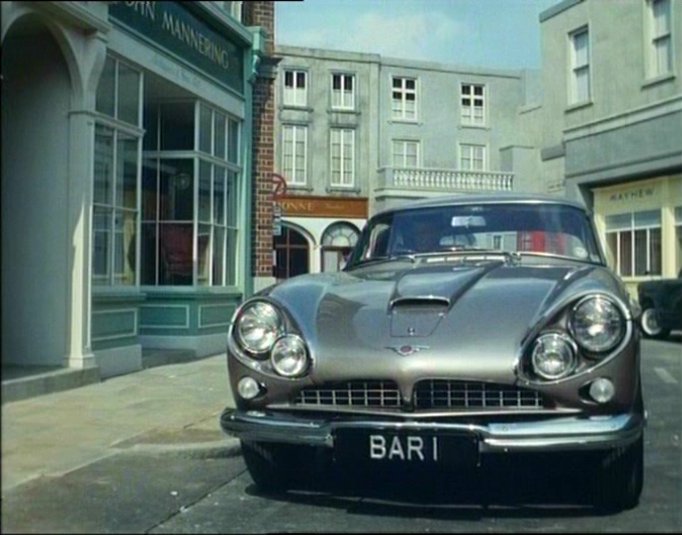 The CV8 parked outside one of John Mannering’s antique shops.

Filming of The Baron got under way in July 1965, with one series being filmed, which amounted to thirty epsiodes. Filming never left the UK, and most was locationed in and around Elstree Studios in Borehamwood, Hertfordshire.

The backlot at Elstree Studios was extensively used, being transformed alternately into Mannering’s antiques shop, a Mexican town, a Parisian nightclub, and even an East European police station for one episode.

During September 1966, the series was launched on ITV, and lasted through to April 1967. The same series was shown on American television, but with overdubbing to Americanise the language.

The CV8 was kept for the duration of filming, during which time it was serviced at the London-based Jensen distributors, Charles Follett. After the launch of the series on television in  autumn 1966, the CV8 had been disposed of.

Arthur Bridgwood was the next owner of the CV8. He owned the International Shoe Findings Ltd in Leicester. This very specialised company manufactured a range of chemicals and coatings for leather shoes.

It isn’t known in what manner Bridgwood purchased the car, or how indeed, Goodman went about selling the car. However, the Leicester based Jensen distributors, Francis Motors, were involved with servicing the CV8 for Bridgewood from the start, and even made Jensen Motors aware that the car had changed owners from Goodman to Bridgewood. 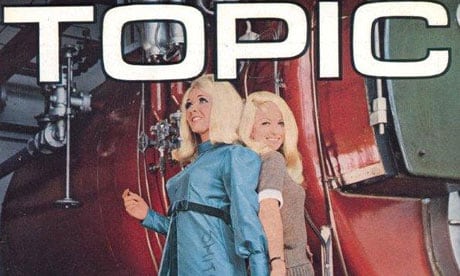 A typical cover from one of Ball’s Nottingham Topic Magazines.

Bridgwood kept the CV8 for less than a year. The next owner was John Ball of John Ball Publications Ltd.

A subsidiary of the Company was Topic Magazines Group, which produced glammed local magazines, such as the Nottingham Topic, and the Leicester Topic.

The magazines were on trend for the time, featuring photo spreads of shop girls and city jazz cellars, along with hunt balls.

Ball wasn’t against throwing a splash of controversy into the pot as well. One  of his controversial features in the Nottingham Topic had a spread of local girls in very topless dresses, touring the city’s hot spots.

It was during the summer of 1967, that Ball purchased the Jensen CV8, at which time the car had covered just over 20,000 miles. The car was immediately given over to the Jensen distributors for a full overhaul and service.

In October 1967, Ball was involved in a serious accident while driving the CV8. The CV8 was showing just under 27,000 miles at the point of the accident. The front was badly damaged, and the car also required a new front cross member. Delivered to Jensen Motors, they started taking the car apart.

The engine, transmission, axle, and all suspension had to be removed to allow the new front cross member to be fitted in the jig. Over 500 hours were spent in repairing the chassis, rebuilding the mechanics, replacing and repairing the glass-fibre, and final painting.

It was towards the end of the year before the car was finished and returned to Ball. When the new Jensen Interceptor was announced in 1966, Ball took an instant liking to the car. Discussions took place with Jensen Motors  at the end of 1967, in regard to the Company building a TOPIC special Interceptor for Ball.

An idea was conceived between Ball and those sitting around the boardroom table, that his TOPIC Interceptor would be used as a marketing exercise. Every section of the car’s build would be photographed, and a magazine devoted to the TOPIC car, published after its completion.

The completed car finished in so-called TOPIC red was ready for collection in April 1968. The magazine devoted to the build of the TOPIC Interceptor was published soon after.

With Ball taking delivery of the TOPIC Interceptor, the CV8 was disposed of. It is unclear if Ball part-exchanged his CV8 against the Interceptor, or sold it privately.

It seems likely that Ball sold the CV8 privately, as by March 1968, the car is shown as having been purchased by Arthur Ford. He was the chairman of Arthur Ford Ltd, electrical engineers and contractors, based in Old Basford, Nottingham – not far from the offices of John Ball Publications. The CV8 had covered just under 30,000 miles at that time.

By September, the CV8 was given over to the Nottingham based Jensen distributors, Mann Egerton, for a 32,000 mile service. The car had actually covered just under 34,000 miles.

Ford still owned the CV8 in 1969, but how much longer he kept the Jensen isn’t known at this stage. The next recorded keeper was by Terence George Sorrell, from Shepherds Bush, London W12. He is shown as the keeper from June 1976.

By 1987, an old index card held by John Staddon, CV8 Registrar, Jensen Owners’ Club. States, “ in possession of Jim Cronin, Romford, Essex”. It isn’t known at this stage if there were other owners of 104/2303 after Sorrell, leading up to when Cronin was in “possession” of the car.

On a hand-written list of previous owners given to the purchaser, Alan Scotto, by Jim Cronin, he states, last owner as being Terry Sorrell. This being the case, it would seem that Cronin purchased the CV8 direct from Sorrell.

Scotto remembers the day he acquired the car,

“I acquired the CV8 in 1987 from a classic car dealer in Romford, Essex.  I had actually gone to see a white painted CV8. The dealer had a large barn full of classic cars.

Once there I was taken by this other CV8, which was painted in a burgundy red colour. I agreed to purchase this burgundy red car, not knowing the famous history of the car until sometime later.

The CV8 had the registration number ‘8 FAY’, but the dealer had sold that number on to someone else. With the help of the then Jensen Owners’ Club CV8 Registrar, Tony Clarke, I had the original registration number, ‘CEA 580C’ re-assigned to the car by the DVLA.

The car had a partially stripped down engine when I purchased the CV8, with various parts of the engine left in the boot. Finding out this wasn’t the original engine to the car, I removed it when I had the chance to fit a complete engine from an Interceptor.” 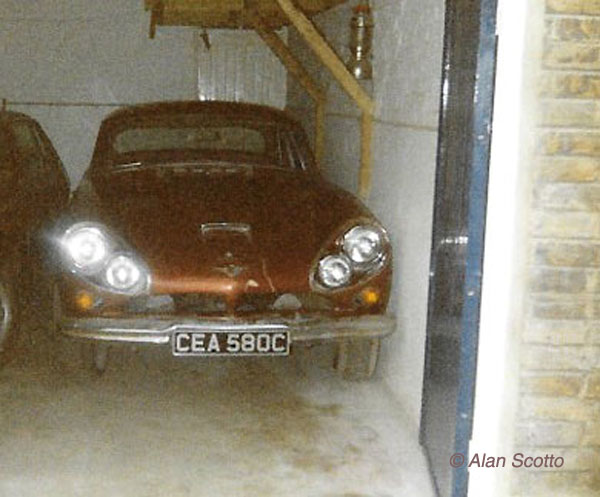 104/2303 photographed by Scotto in the 1990s, after successfully obtaining the original registration number, CEA 580C

Undertaking a bit of engine number research, Scotto found the engine fitted to the CV8 when he purchased the car had come out of a Jensen FF. Bearing engine number 1408/19D, this engine had originated from the Jensen FF famously driven over a mountain cliff by rock star, Ginger Baker.

How this engine had ended up in the CV8 isn’t known, although the FF was broken up for useable spare parts while in the hands of Jensen Motors. Scotto removed this engine from the car during the late 1990s, after he managed to acquire an earlier engine (518/15V) from Jensen Interceptor, 115/2510. 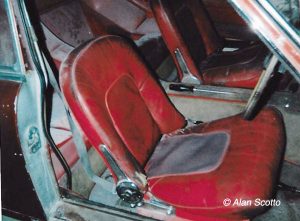 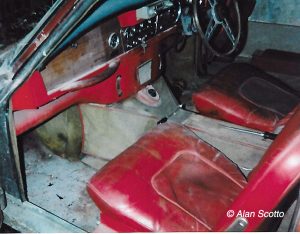 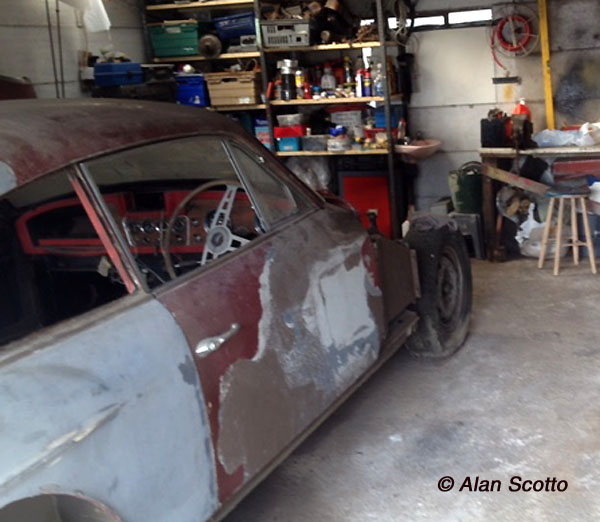 CV8 104/2303 photographed in 2015. At some point previous to Scotto purchasing the car, it had been re-sprayed in a burgundy red.