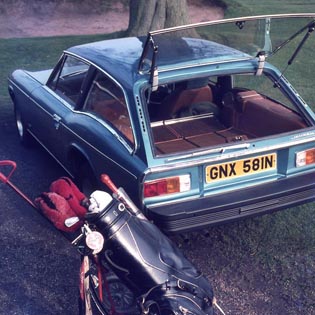 Kjell Qvale was excited about the Jensen GT project. He thought this sporty smaller-engined shooting brake car, with a beautifully refined interior, could be the saviour for Jensen Motors. Particularly since Interceptor sales had bombed. Indeed, the Jensen GT might have been the saviour, but unfortunately it was too late to make any real difference. It was Qvale himself that had come up with the specification for GNX 581N. This was the car that would debut the new Jensen GT to the motoring press. Today, this important car resides in the Museum collection.

Sketches  for a shooting brake Jensen Healey had taken place back in 1972, but it was two years later before it was agreed to move ahead with the project. The fact was, with the petrol crisis, and falling Interceptor sales, a new car was needed. Qvale had pulled the plugs on the ‘F’ Type project, and so attention went back to an up-market shooting brake version of the Jensen Healey.  The idea was to use the Healey platform, but to build the car up as a sporty fixed head estate car. The new car, designated as the Jensen GT, would host many refinements not available in the humble Jensen Healey – such as a full burr walnut fascia, leather options, electric windows.

The hope was that this smaller-engined vehicle, with Interceptor levels of interior refinements, and realistic petrol consumption, might together be a combination that could save Jensen Motors. The Development Department at Jensen Motors were given the job of building the new prototype Jensen GT cars.

Initially both cars were finished with the standard Jensen Healey dashboard, and in fact, some of the original publicity photographs taken of GNX 581N by Michael Cooper show the Healey dashboard still in place. When GNX 581N had the full burr walnut dashboard fitted, yet another photo shoot had to be arranged.

The LHD GT was finished and registered in December 1974, and the RHD GT was finished and registered on the 14th February 1975. Interestingly, DVLA files show that Jensen Motors called the car a Jensen Healey GT at that stage, although immediately the car was set for production, the Healey connection was removed. This wasn’t surprising, since by then Donald Healey had resigned his directorship of Jensen Motors.

Initially both cars were fitted with a Vauxhall 2279cc engine, although it was decided to revert back to the Lotus engine, so both prototypes had their Vauxhall engines removed, and Lotus units fitted.

Alan Vincent, Technical Director at Jensen Motors remembers GNX 581N very well, as he used the GT as his daily driver from 1975 until 1979. According to Vincent, Qvale was keen to use GNX 581N as a publicity car, and to this end had found a very unusual material for the trim,

“Qvale had secured from somewhere this striking electric blue and orange patterned material, which he wanted us to use for the seats, and insets of the door panels. The surrounds to the seats and door panels were in a tan ambla material. It sounds awful, but it worked.”

The exterior of the GT would be in reef blue. As soon as GT chassis 19850 was finished and registered as GNX 581N, it was driven locally for a photo session. Michael Cooper was used once again, taking a large variety of images of the GT. A selection were used for the initial publicity brochure for the Jensen GT. 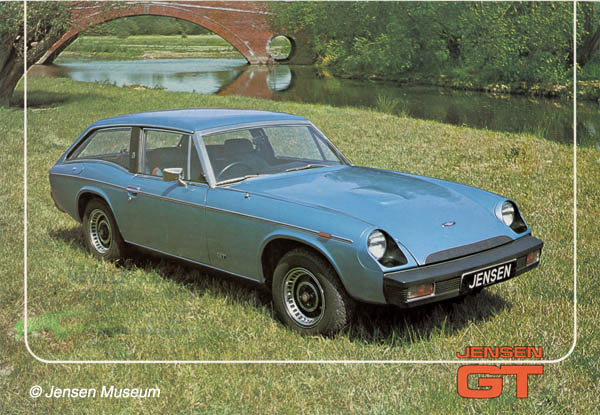 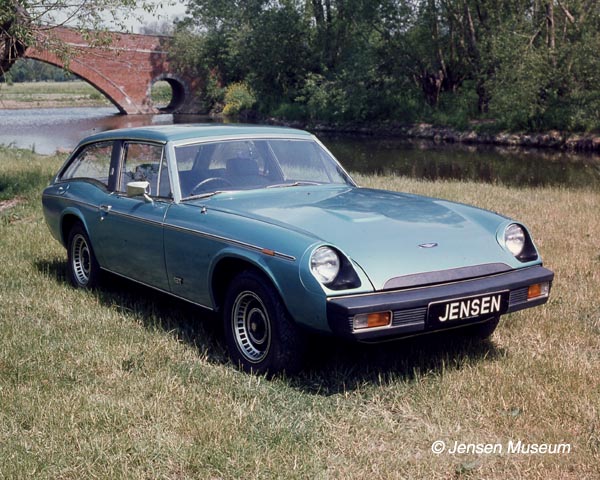 One of the original images of GNX 581N taken by Michael Cooper in 1975. 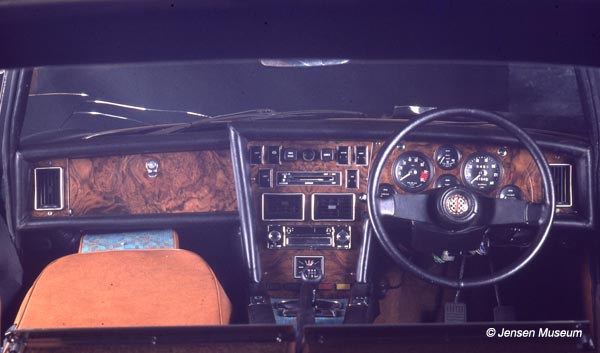 Interior view of GNX 581N. Photographed by Michael Cooper in 1975. 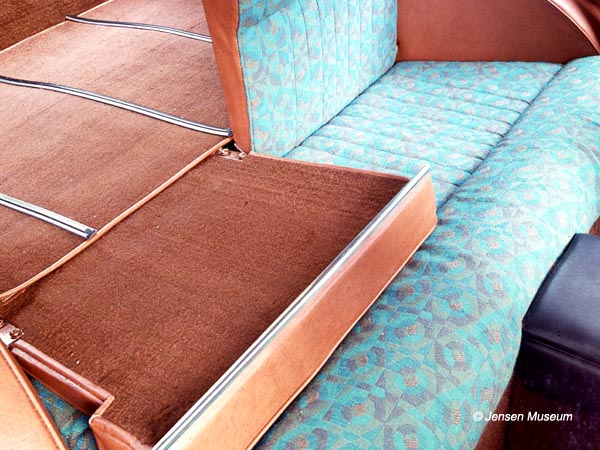 The striking electric blue & orange material, which was sourced by Qvale. 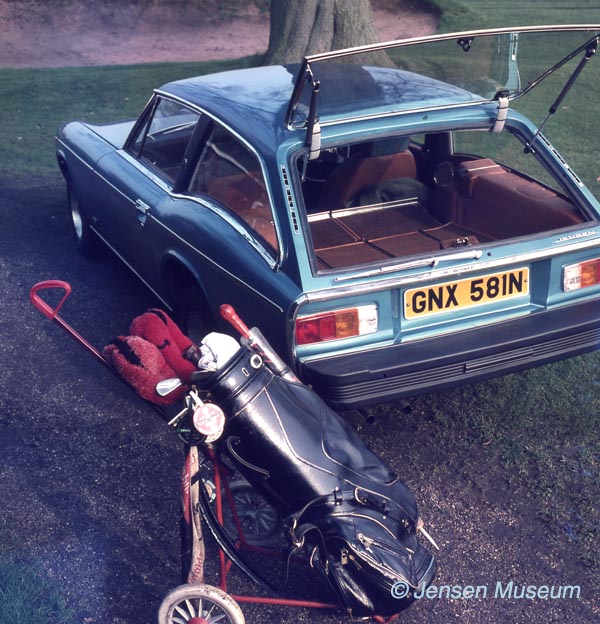 As production of the GT started, and the use of GNX 581N for development, had come to a natural end, Vincent started to use the GT as his daily driver. Living over towards Bridgnorth, the car undertook a daily commute of some 50 or so miles. 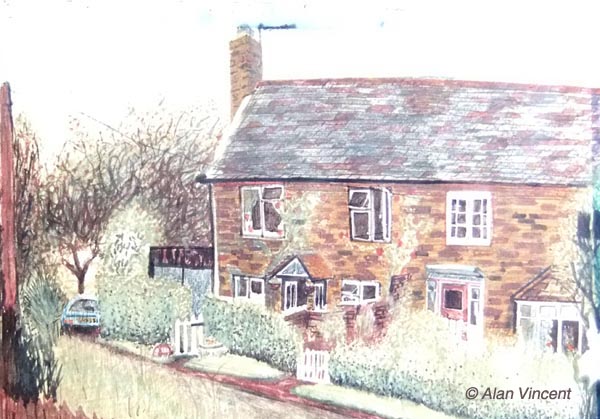 Watercolour of Alan Vincent’s cottage near Bridgenorth, painted in 1975. GNX 581N can be seen parked to the left of the cottage.

Vincent remembers the day Qvale tried to get him to change from his Jensen GT to a Jensen Convertible, “One day there happened to be a brand new white Jensen Convertible with red trim and red hood, parked immediately outside Development. Later that day, Qvale strolled in, asking me how I liked my new ‘Director’s Car’. Well, the last thing I wanted was to start driving a Jensen Interceptor Convertible, but Qvale was a hard man to say no to. I told Qvale that I preferred to drive the GT, to which, Qvale quickly came back with,

“I’m not having my Technical Director being seen around driving a GT, he needs to be driving an Interceptor.”

I then told him that I lived out in a rural part of the country, and that the Convertible would be ruined driving through the narrow lanes where I lived. That didn’t wash either. In the end, I just said thanks, but left the Convertible outside Development, and continued to drive the GT.

After some weeks had elapsed, Sales asked what was happening with the new Convertible sitting outside Development, as they needed a white Convertible of that specification for a customer. Seeing a perfect opportunity to get myself out of this predicament, I told them they could have the Convertible, they just needed to clear it with Qvale. Sales came and took the Convertible away. I never heard any more about it from Qvale, he probably had more pressing things to worry about.” 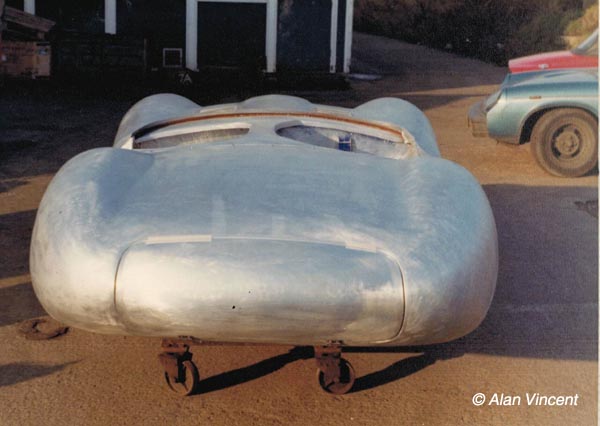 Photograph taken by Vincent at Jensen Special Products in 1976. GNX 581N can be seen parked up to the upper right.

Vincent continued to use GNX 581N as his personal ‘Director Car’ through till May 1979. Jensen Special Products had run into financial difficulties, and closed down in 1979. Vincent’s beloved GT was sold at that time.

The next owner was Stephney Johnson. She ran the ‘Shropshire Arms’ at Trench, near Telford in Shropshire. Apparently, Johnson always purchased red cars, so why she purchased the GT isn’t known. However, at some point during the 1980s, GNX 581N was respayed red. 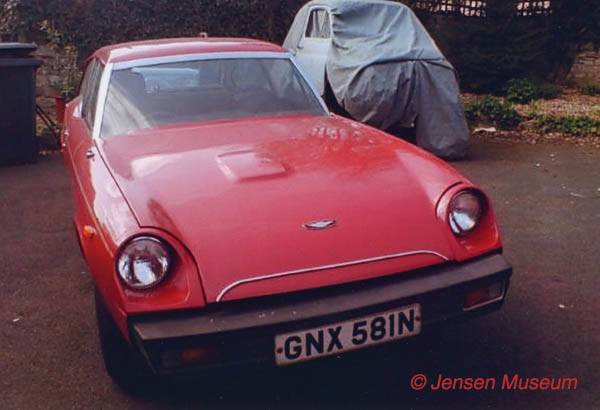 By the 1990s, the GT had been relegated to a garage, where it remained unused until the early 2000s. The GT was offered for sale at that time, and purchased by Appleyards, Jensen specialists based just outside Derby. They already had a customer waiting for this historic car. 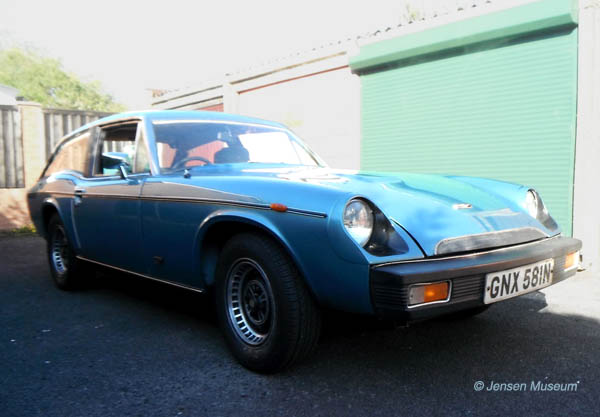 Thomas Duffy from Bolton, would be the next owner of GNX 581N, acquiring the car in 2009. He undertook an extensive restoration of the car, having it resprayed back to its original reef blue.

The focus of the Museum is always towards conservation rather than restoration. However, GNX 581N has already been restored. There are short comings in the restoration, and these will be corrected by the Museum.

Chassis / Body: The car chassis is of sound structure with no rust in evidence. Although much of the restoration work is to a good standard, door gaps and some fitting up, is poor. The paint is acceptable, and is a perfect match to reef blue. The car will eventually be stripped back to metal, and resprayed to a higher standard. At that time the door gaps will be corrected.

Mechanics: Duffy had a good background in mechanical engineering, and has rebuilt the engine and other mechanical components to a high standard. He has also kept the engine-bay to original specification. 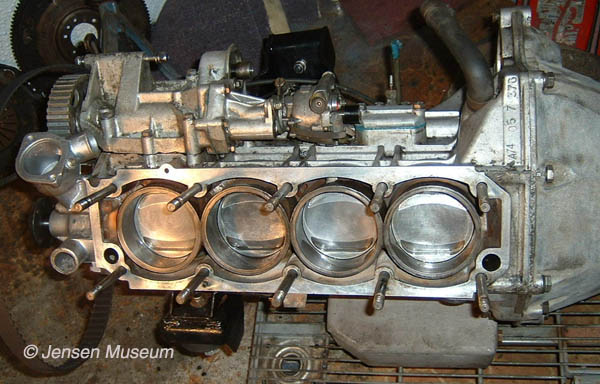 Rebuild in progress to the GNX 581N engine.

Interior: Both driver and passenger seats required attention. Although the electric blue orange fabric remained in excellent condition, the inner seat foams had disintegrated over time. Marque specialists, Rejen, have carefully replaced the interior foams. Carpets, although replaced by Duffy, were made by Rejen to original specification. These will be retained. There is some slight cracking to the burr walnut fascia. The original burr walnut panels will be conserved, and carefully restored at a later point.

COPYRIGHTS: All images and text copyright of The Jensen Museum | Alan Vincent