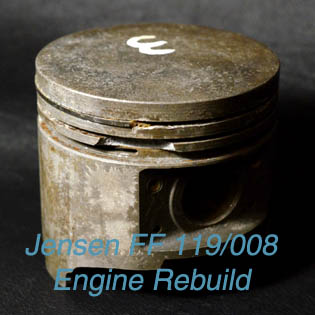 Vignale made Jensen FF 119/008 had spent its initial life being driven around the Porsche test-track by their Chief Engineer / Chief Test Driver, Manfred Bantle. Porsche wanted to appraise the Jensen FF’s unique Ferguson four-wheel-drive system, with the idea of creating a similar system for themselves.

When 119/008 was acquired for the Museum collection, the future restoration / conservation work required to the car was evaluated.

The decision was made that due to the special place the engine played within the car’s testing by Porsche, the Museum should apply minimal interventive restoration of the engine.

This might initially sound like a contradiction in terms, but the agenda was to reuse anything that wouldn’t impact negatively on the standard performance of the 383 engine circa 1966. 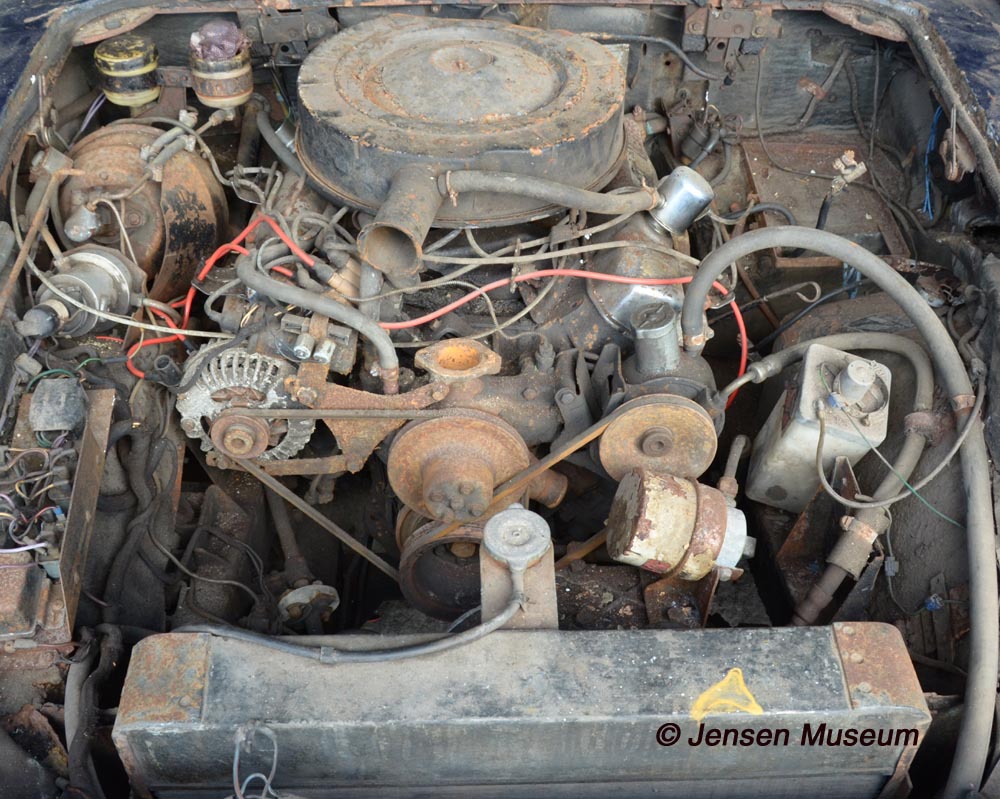 119/008 engine-bay photographed at the point of acquisition by the Museum in August 2016.

The Jensen FF was fitted with a standard Chrysler 383 engine. The engine number is 676 / 19B, and the cast date shows the block to have been created on the 14th April 1966. Of interest is the fact the rocker cover label gives an incorrect engine date of 19th April. The completed engine was typical of its period, with closed-port heads and Carter AFB carburetter.

The car had covered 49,025 miles from new, at the time we started the rebuild of the 119/008 engine. The lowish mileage left us in hope that the bores would be good, and that we might able to save and re-use many of the internals. 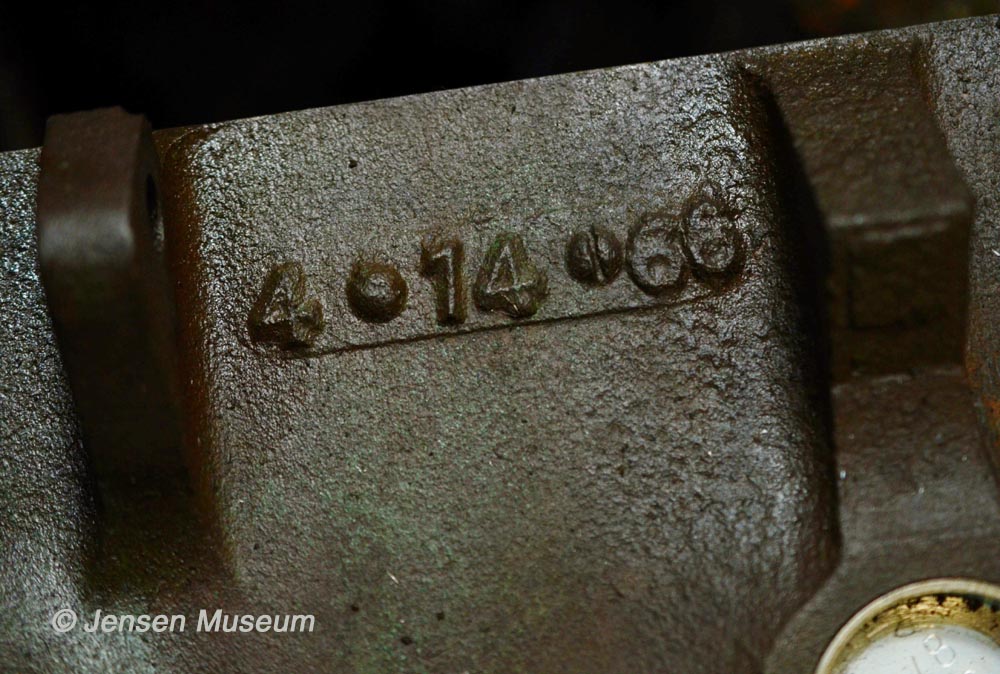 Engine date cast to the block at the point of manufacture. Obvioulsy it works on the American dating system of month first, then day, then year. 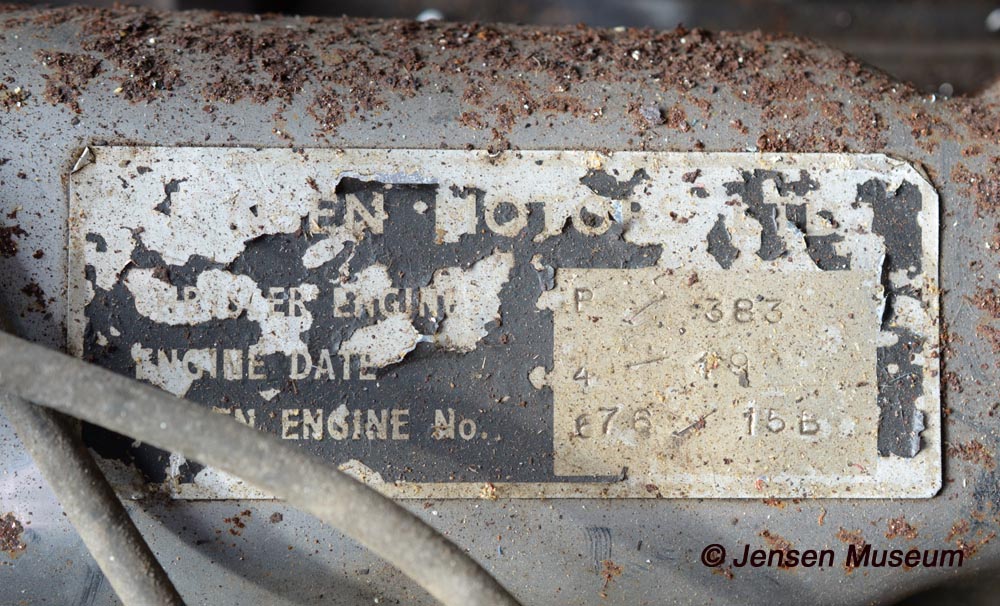 When Jensen FF 119/008 first arrived at the Museum, the engine was seized. Bearing in mind our minimal interventive agenda, we decided initially to try and unseize the engine.

This was accomplished by filling the bores with diesel, leaving the fluid in place , and then every few days trying to turn the crank. Although this seems rather archaic, the practise can work.

We were hoping this would work, and we could initially turn the engine, then  strip the engine down with a better understanding of the internal condition.

In this instance it didn’t. So, the heads were removed, in preparation for the removal and a complete strip down. Museum curator, Ulric Woodhams, would assist V8 specialist, Adrian Longstaff.

Strip down and removal of the engine 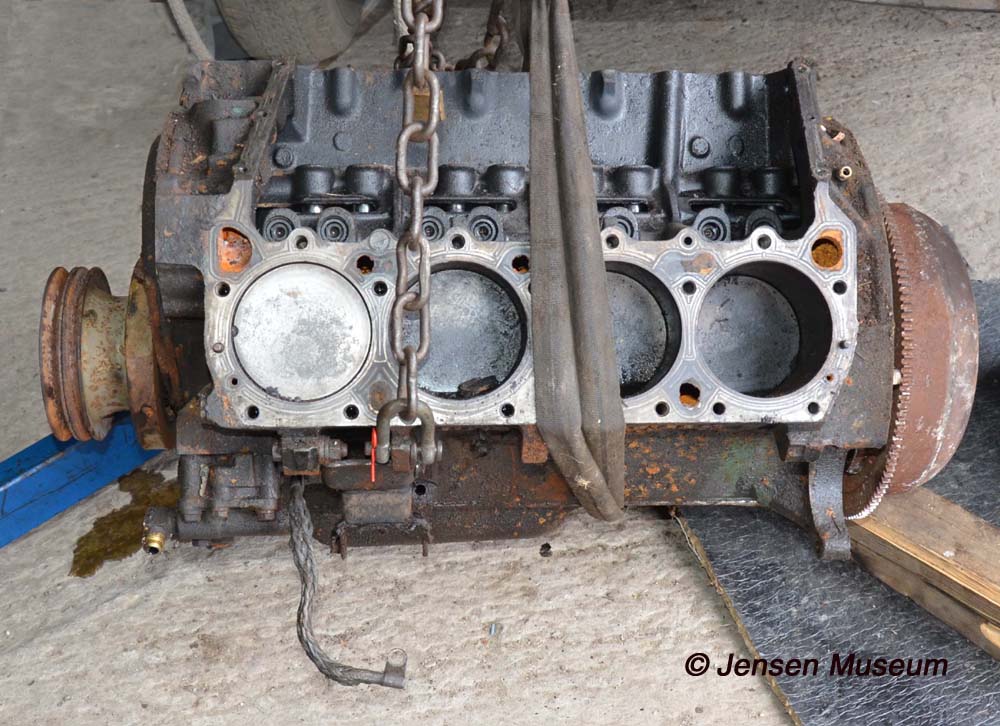 Engine as removed from car.

Removal of the engine from Jensen FF 119/008 started in August 2016. The ancillaries, and heads were removed first. As we expected, the heads were the earlier closed-port type, which continued to be fitted to 383 engines in 1966, and probably into some of 1967, before being changed to open-port heads. 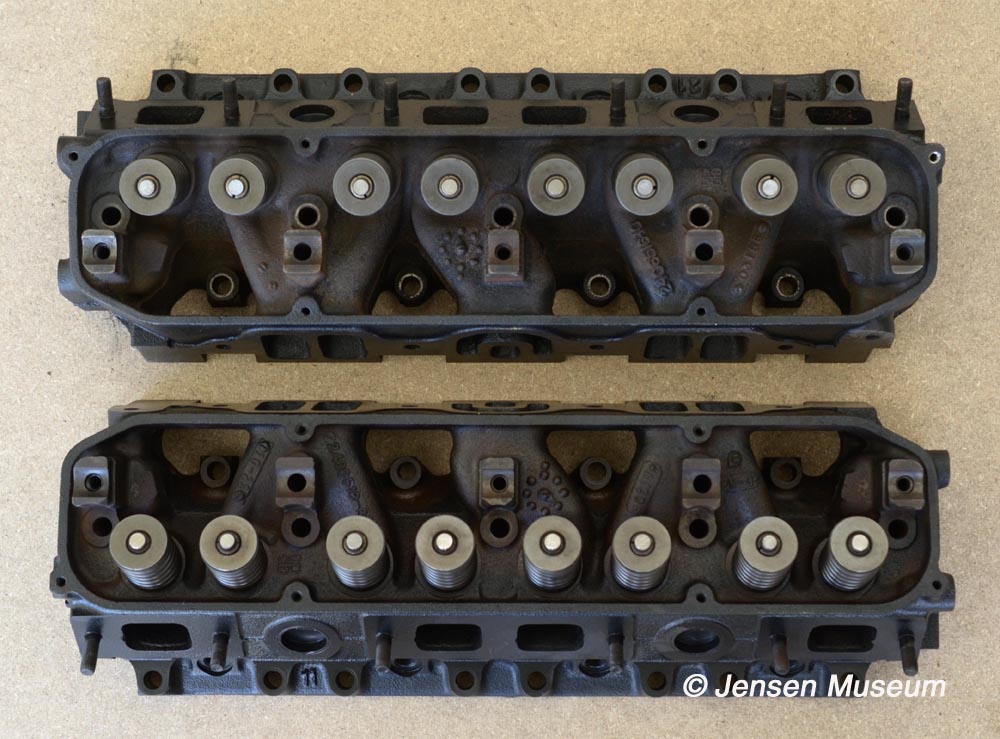 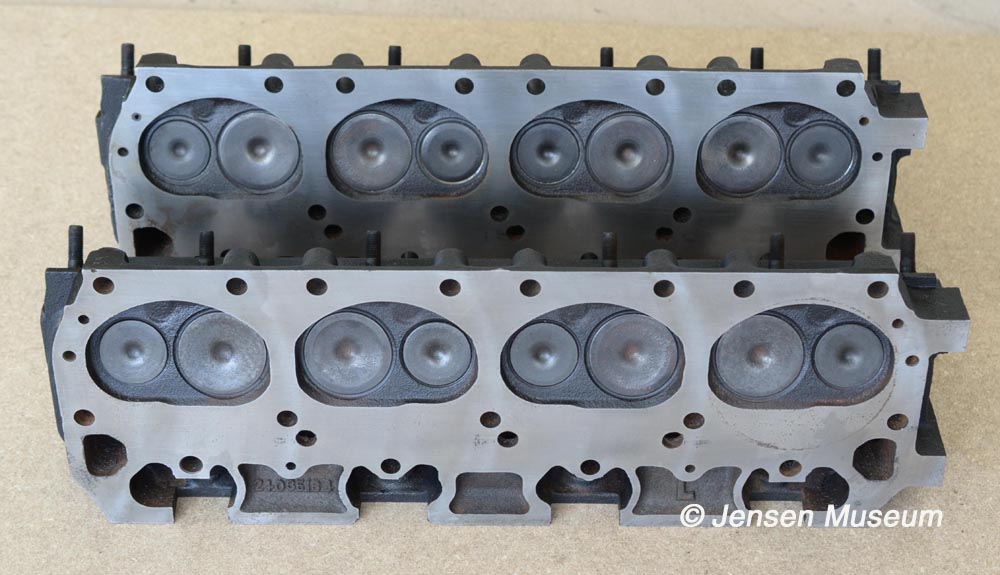 Closed-port heads. The earlier half ports (closed ports) can be seen in this photograph (photograph taken after re-conditioning). 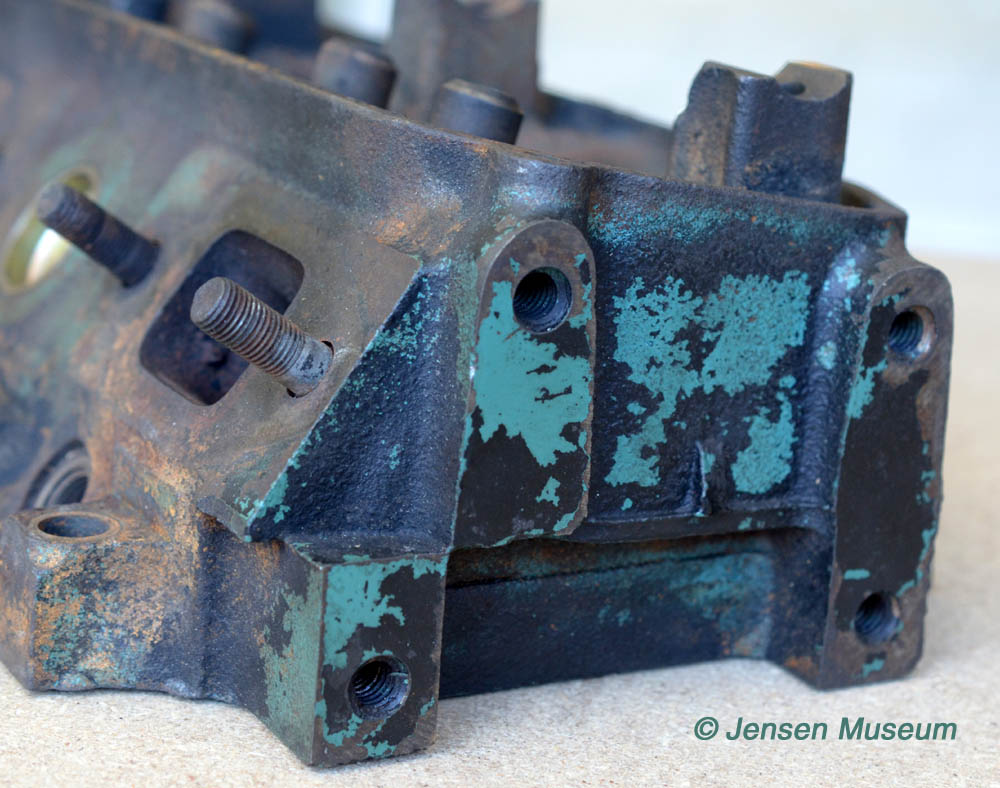 The issue of seized small-ends raised its head once again

With the heads removed, it became obvious that the small ends were seized. We have previously rebuilt one of the Museum’s CV8 engines (104/2200) which also had seized small-ends, so we were well versed in this issue.

Fundamentally, the small-end which fits the piston to the conrod, seizes in place. Because it is under the umbrella of the piston, all the diesel in the world isn’t going to seep through to the small-end.

The issue with seized small ends is the difficulty to remove the pistons with conrods from the bores. Since the piston and conrod is seized within its set position within the stroke of the bore.  How do you get them out without causing damage to the bores or the pistons. The answer is very carefully, and very laboriously. 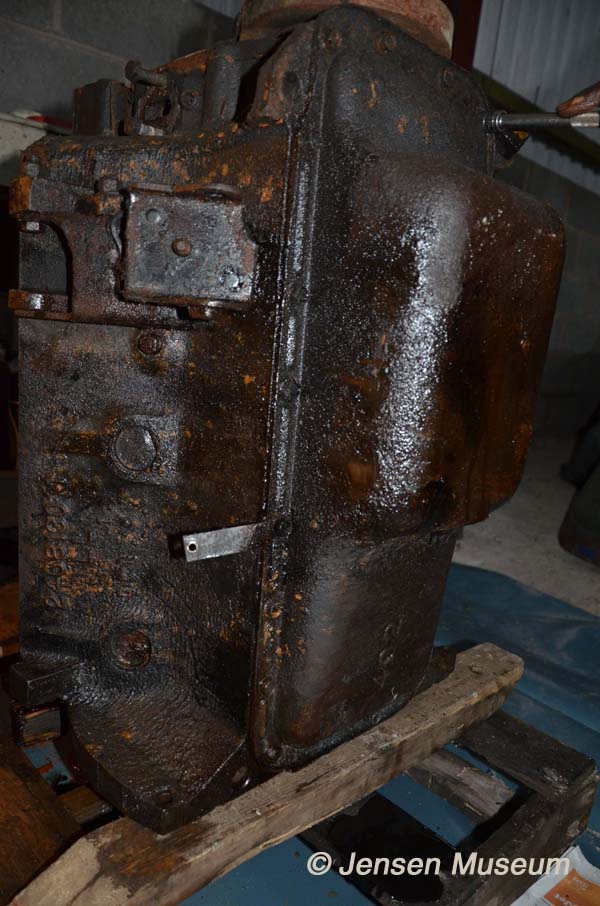 The engine removed from the car. Sump about to come off. 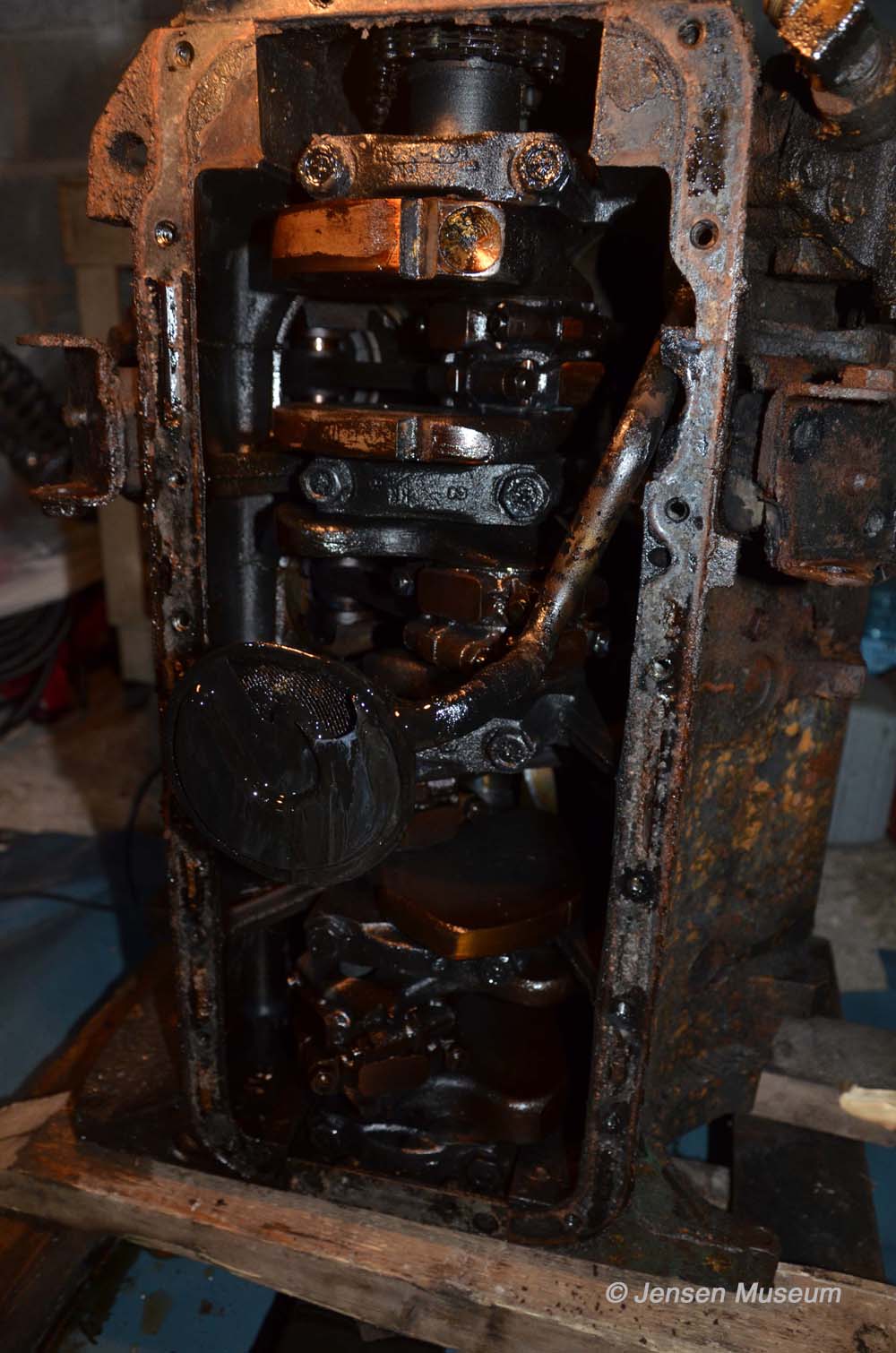 With the sump removed, the con-rod caps will be unbolted.

In the situation with the engine from 119/008, there was our sensitive agenda of minimal interventive work. Therefore we wanted to keep as much as possible of the original engine internals, that could be realistically reused.

Luckily, on removal of the heads we could see the bores were good. With careful honing the standard size bore could be maintained, which also meant that in theory we could reuse the original pistons, just changing the rings.

However, we still had to remove the pistons and conrods from the bores without causing any damage to the bores, or the pistons. Additionally, once out, we had to hope we could unseize the small-ends.

With the engine out, and up on end, the sump was taken off, and the job of removing the pistons and conrods attempted. It was a slow procedure. With the conrod end-cap unbolted and removed, the job of carefully and slowly hammering the first conrod and piston out of the bore proceeded.

One has to be aware of both the bore, and of the crank shaft while this process is going on. As the piston is pushed up into the bore, remember the conrod is seized in its set position, so as it starts its journey up the bore, then one has to carefully hammer the conrod, to straighten it up to complete its journey out of the bore.

Eventually, we had all eight pistons and conrods out of the engine. With that arduous job out of the way, we could straightforwardly remove the remaining parts. The timing sprocket could come off, along with chain, and then the cam could be removed. Lastly, the crank could come out. The timing sprocket proved (if we needed any proof by this stage) that the engine had never been apart.

An original nylon toothed timing sprocket was still in place

The standard nylon toothed timing sprocket was still in place, and although remaining complete, some fatigue lines were obvious. Once cleaned off, both the original cam, and the crankshaft were in a good enough condition to go back in the engine. 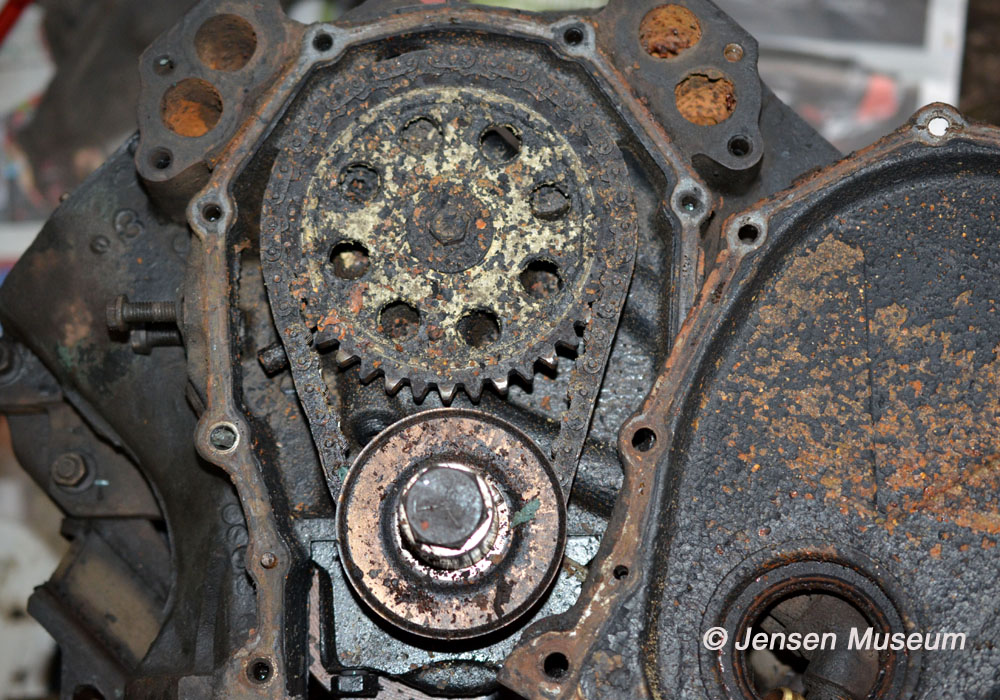 The damper off, along with timing cover. The original nylon sprocket exposed for the first time in over forty years.

Obviously we had to make an exception of the timing sprocket. However good a nylon toothed sprocket looked, it would be madness to refit one. A new all metal sprocket would replace this part, along with chain.

It was time to look at the pistons and conrods. As they had been removed, they had been cleaned off, and each numbered in white to the piston’s crown, so there was no chance putting them back in the wrong order.

The next step was the worrying one. Could we unsieze the small-ends without having to destroy the pistons. The first piston with conrod was fitted into a vice with the piston very carefully wrapped.

From that point using a combination of plus gas, and a little heat, we tapped the wrapped conrod a little one way, and then the other. All the time spraying plug gas at the ends and centre of the small-end. This is another laborious operation, and one in which patience is a virtue.

A special tool to help free the seized small-ends

We continued the process with all eight and left them with copious amounts of plus gas. The following week, we started the same procedure again. It was working. Longstaff had devised a simple, but effective special tool to help free the small-ends. 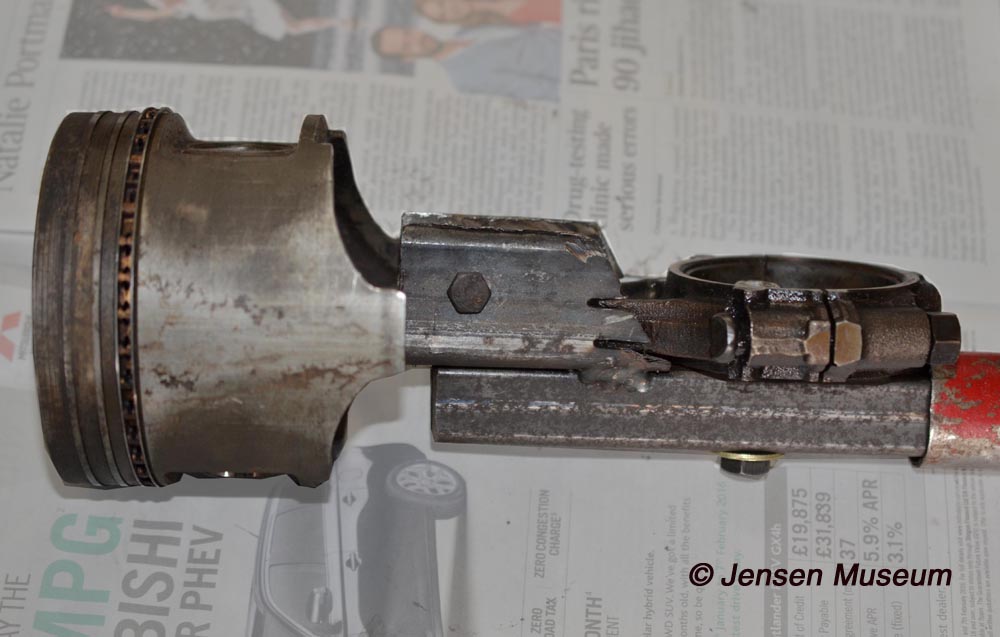 The special tool made by Longstaff, which helped in freeing the small-ends.

The special tool shown from the opposite angle.

This metal bracket held the stem of the conrod, and then could be fitted into a large bar. Using this – again with plus gas and heat- made the job much easier.

Eventually we had all eight of the small-ends completely free and operating smoothly. Next job was to remove all the old rings. This was expected to be straight forward, but it wasn’t. The rings had oxidised into position, and so it was another long laborious job to remove them. Even worse, piston ‘3’ really did not want to give up its old rings. 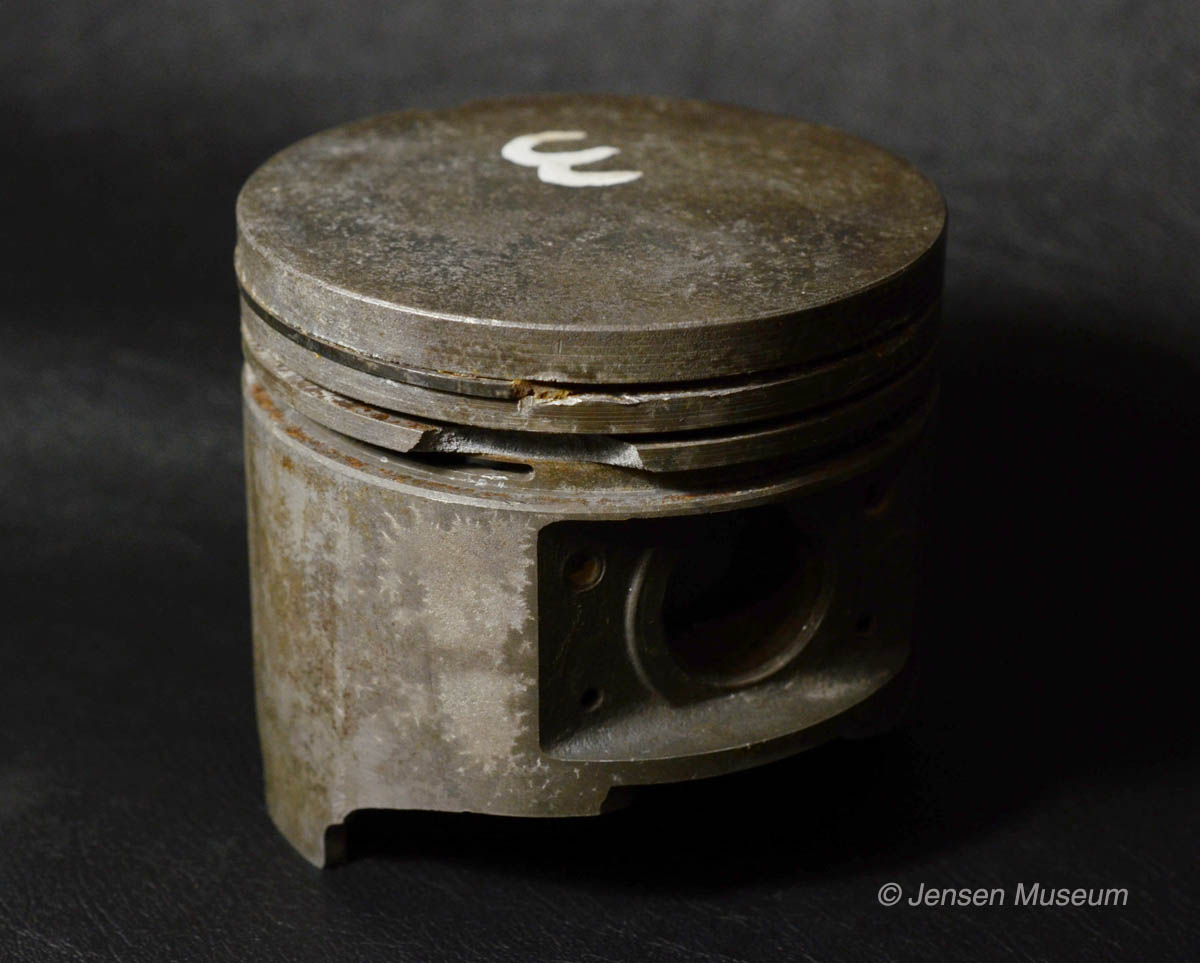 Piston ‘3’ did not want to let go of its rings. A part of the piston side wall broke away, so a replacement had to be used. Piston ‘3’ has been archived.

A part of the piston wall broke off in the process. It was a shame, but at least seven of the pistons had survived to go back in the engine. Luckily we had a standard size piston in stock. With seven original pistons, and a replacement for number ‘3’, it was time to put in the new rings in preparation for them going back into the block.

The bear block was cleaned off, and all the core plugs replaced. Typically some of the black paint applied by Jensen Motors had come away revealing the Chrysler turquoise paint underneath.

We simply cleaned and degreased the block, but have left what remains of the Jensen black paint, and the Chrysler turquoise. A thin coat of engine black was applied over the existing paints. The bores were honed, and all the faces carefully cleaned off ready for re-assembly.

As work progressed on the engine, the heads had been sent away to Motocast, a company specialising in the rebuilding of engine heads. They could check them, and replace any consumables such as valves or springs as might be required, and replace the seals. Additionally they would check the surface, and give them the lightest skim necessary.

Other ongoing work, was a full clean and overhaul of the Carter AFB carburetter, and a full strip down of the distributor.  Never seen unless one undertakes a full distributor strip-down, is the dating system to the inside of the body. 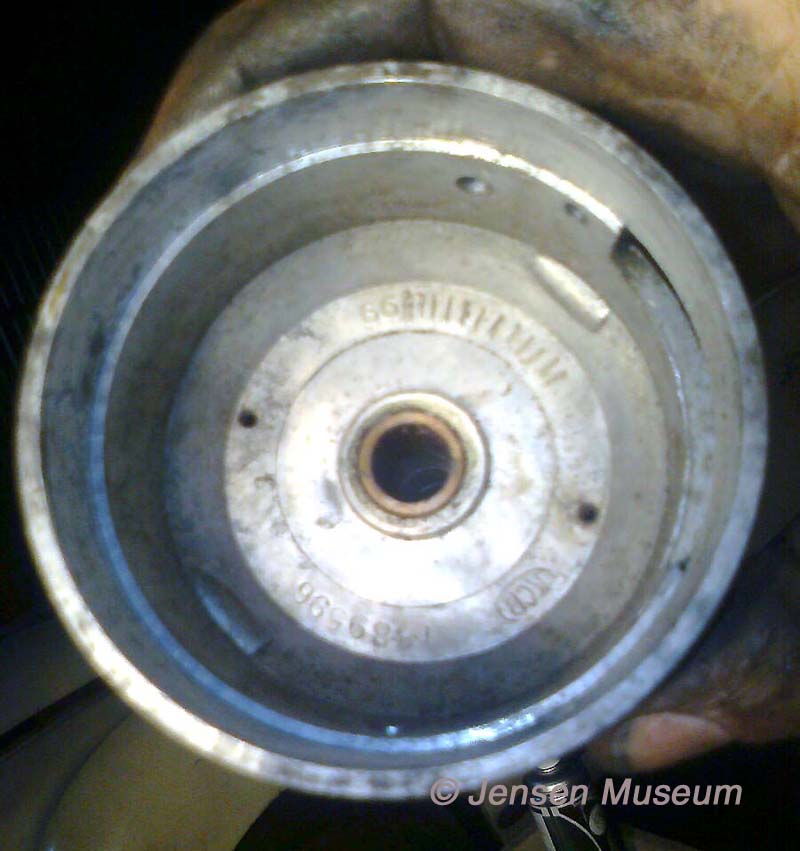 The inside of the distributor case showing the ’66’ year date and month strokes.

The system starts with a two digit year, and then twelve strokes, representing the months of that year. This example was bearing the year digits for 1966, and the first stroke had been crossed, showing the body to have been manufactured in January 1966.  The early central spout style radiator was sent away for pressure checking.

These radiators were only fitted to some of the first Interceptors and FFs. They were all manufactured by the Bristol-based company, E & C Bowman Ltd, and were given Jensen Motors’ stock number CT 5267. It transpired the radiator core required replacement.

It was time to start building the block back up. The crankshaft went back in, the cam, the replacement timing gear, etc. Then the pistons. It wasn’t long before we had a complete short block ready for fitting back to 119/008. 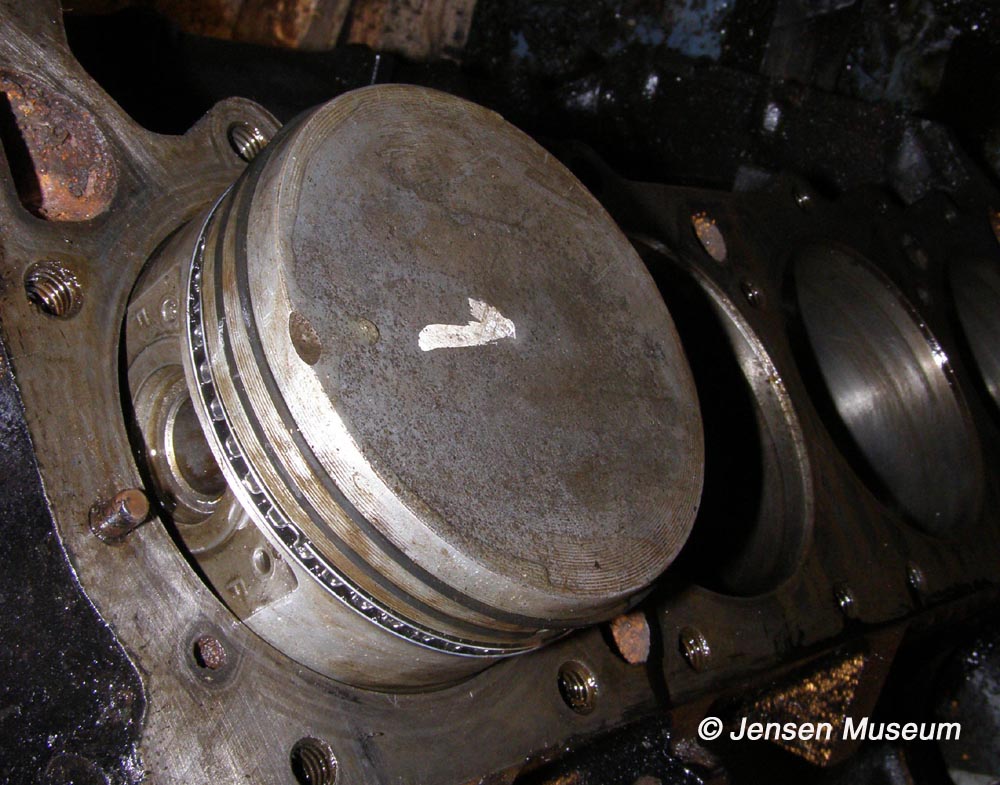 Piston number ‘1’ going back in. 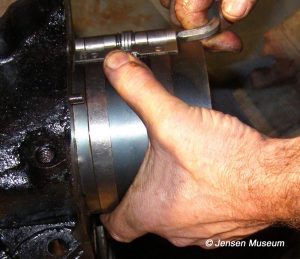 Although some workshops would build the full engine up out of the car, we decided to fit it as a short block and fit the heads and other ancillaries afterwards. In part this was also because the workshop being used didn’t have an over-head hoist. We were using a mobile hoist with elongated lift.

The fitting of the engine was straightforward enough. With the engine in place, the heads and other ancillaries were fitted up, and a new oval boxed exhaust system fitted.  By the end of October the engine was complete. On 1st November 2017, 119/008 fired-up for the first time since the end of the 1970s. 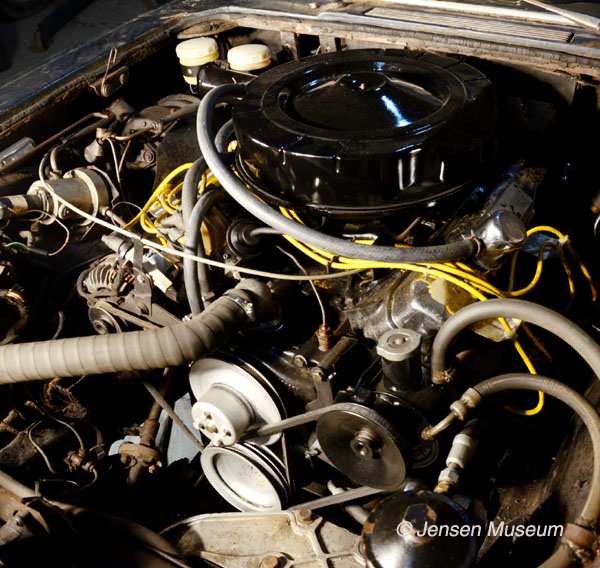 The engine quickly settled down with good oil pressure. A period of snatching followed, but 119/008 was alive again. It is incredible to think those same pistons (albeit one), along with most of the internals were being put through their paces on the Porsche test-track fifty years ago.