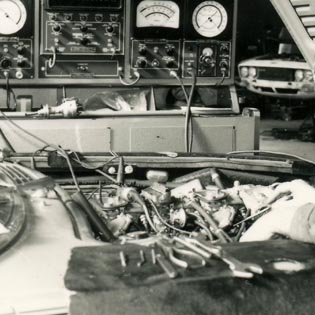 At some point between 1972 and 1973, the Development Department and Drawing Office were resited to a building just across from Bay 8, where a car park had been.

In late 1975, Alan Vincent and Ray Allsopp entered into discussions with the newly appointed Receiver, concerning buying the entire Development Department and Drawing Office. The Receiver agreed in principle, and this led to the Development Department and Drawing Office, becoming Jensen Special Products immediately after closure of Jensen Motors. Over 90% of all ‘DD’ and ‘DO’ employees joined Jensen Special Products.

Joined Jensen Motors in 1971. He went back to Australia early 1973 because his wife’s work permit was withdrawn.

Born in South Africa during 1927, Beattie was educated in England. He found employment with the Rootes Group, joining their design team. During 1959, Beattie heard about a vacancy with the firm of Jensen Motors Ltd, as a Deputy Chief Engineer. He applied for the position and was given the appointment of Deputy Chief Engineer on 1st January 1960, working under Chief Engineer Eric Neale. By 1965, Beattie was appointed to the Board and was committed to the idea of a CV8 replacement being styled in Italy, Brian Owen agreed. Although the Jensen brothers and Neale were against the idea, John Boex agreed with Beattie and Owen. Shortly afterwards Beattie was obtaining design ideas from various Italian design houses. Unhappy about his position within the company, Neale retired in late Spring 1966, Beattie took over his title of Chief Engineer with a salary of £2,950. After Alfred Vickers resigned as Managing Director in July 1973, Beattie took on this appointment. It was to be short lived, as he had to relinquish his post in late 1974 through illness. Beattie died in 1975 aged 48.

Davies worked alongside Fred Nicklin. Alan Vincent remembers Davies was particularly good on electrics and instrumentation and believes Brian Spicer hired him at the beginning of the 1970s. Martyn Davies and Alan Vincent took a Jensen Convertible to Norway for extreme cold weather testing. The only time such a test took place at Jensen Motors.

Jones came to work at Jensen Motors from Rootes in February 1964, initially working on chassis engineering to the Sunbeam Tiger within the Design & drawing Department. Later he became Assistant Chief Engineer under Beattie, and was involved in development work on the Jensen FF, before leaving in December 1967 to join Ford.

However, his job at Ford only lasted three months, as it was eliminated due to the formation of ‘Ford of Europe’. Luckily, Jones managed to find employment back at Rootes Group, first as Vehicle Test Manager, and later as Manager of Electrical Design. Jones re-joined Jensen Motors again in October 1972 as Chief Designer, and was later given the position of Chief Engineer after Beattie became Managing Director in July 1973, and remained as Chief Engineer even after Beatie changed his role from Managing Director, to Director of Engineering. Jones left Jensen Motors in June 1975 moving to South Africa to work for Ford Engineering.

Neale was born in 1910 in Halesowen, Worcestershire. He started work with Mulliners in Birmingham in 1927 as an apprentice designer. He left Mulliners in 1929, joining Holbrook Bodies Ltd, and by 1931 had changed position again joining the Singer Motor Company as a body designer. After a couple more career moves, the war started and Neale joined the Royal Air Force.

After demobilisation in 1945, Neale returned to the Wolseley Motor Company. He received something of a cold welcome on his return to Wolseley, but a meeting with Richard Jensen led Neale to leave Wolseley and join Jensen Motors Ltd in 1946. He remained with Jensen Motors for twenty years and had an excellent relationship with the two Jensen brothers’.

Spicer was recruited directly by Kevin Beattie in 1964, and worked directly under Beattie as Chief Experimental Engineer. After Howard Panton left, Spicer took over as Deputy Chief Engineer. In June 1975, after Mike Jones left, Spicer assumed the role of Chief Engineer. He headed the experimental department, and remained at Jensen Motors until 1976. At which time two new companies were formed, Jensen Parts & Service, and Jensen Special Products. Spicer moved to Jensen Special Products as Chief Engineer. After JSP folded, Spicer set up a Subaru dealership near Ayr, called S&S Services. Spicer died in June 2022.

Joined from Chrysler (UK) 1973. Vincent was interviewed by Kevin Beattie, and was given a position as Development Engineer, although it was agreed that his position would be raised to Technical Director  after a year. Vincent remained at Jensen Motors until 1976, at which time two new companies were formed, Jensen Parts & Service, and Jensen Special Products. During late 1975, Vincent, with Ray Allsopp, engaged in talks with the Reciever. Vincent had an idea of keeping the entire Development Department & Drawing Office on after the closure of Jensen Motors. He also managed to get Allsopp on board as a possible partner of a new company. The Reciever agreed to the overall idea, but made it clear the department’s employees must not be told until after the closure of the Company. Vincent and Allsopp managed to get the required loan from the bank to buy the ‘DD’ and DO’ from the Reciever, and that is what happened directly after closure of Jensen Motors. Jensen Special Products was born.

Start / Finish dates not known. Bedford was working at Jensen from the 1950s.

Started as an apprentice at Jensen Motors in the mid-1960s. Possibly with the Company until 1976.

Joined Jensen Motors in 1967, working under David Millard in the Service Department. Moved over to Development in October 1970.. Worked in Development until 1976.

Believed to have started at Jensen Motors in the early to middle 1960s. Finish date not known.

Started at Jensen Motors in the mid-1960s, and believed to have remained with the Company until 1975/76. Former Jensen Motors draughtsman, Nick Maltby remembers Greatorex, “He was very proud of his name, and what it might mean in relationship to ancient kings.”

Joined Jensen Motors in 1971 as an apprentice mechanic. Once qualified worked in development. Hunter was one of the development team working on the prototype Jensen GT. After the collapse of Jensen Motors, Hunter moved over to Jensen Special Products.

Started with Jensen Motors in the early to mid-1950s. Believed to have remained with the Company into the  1970s.

Joined Jensen Motors in 1968 working in Service Department under David Millard. Transferred to Development in October 1970. Peckover remained in ‘Experimental’ until the company closure in 1976, and then continued with Jensen Special Products until leaving to join SU Fuel systems in March 1977.

Start date not known. Was working at Jensen from the late 1950s / early 1960s. Believed to have remained with Jensen Motors into the late 1970s (possibly up to closure in 1976). Former Jensen Motors draughtsman, Nick Maltby, remembers Sayers, “Horace was a character, very amenable, probably knew more about the Company than some of the directors. He was the kind of character, who, at the end of a novel, would be revealed as the owner of the Company. He appeared as a simple soul, but there was an air of mystery about him.”

Belived to have started as an apprentice in the mid-1960s. Left to join Fire Service in late 1975

The son of George Smith, Chief Production Engineer. Started as an apprentice within the Development Department. He left Jensen in 1976 (?) to join Lucas.

Transferred from Tool Room in 1970. Finish date not known.

Son of Joe Belcher on body side of Development Department. Alan Belcher was skilled as a toolmaker. Belcher started work at Jensen in the mid-1960s, and probably remained at Jensen Motors until 1976.

Joined the Company from early to middle 1950s. Remained at Jensen Motors into the 1970s. When he retired (date not known), Jack Moore took over as Foreman. Former employee, Nick Maltby remembers Joe Belcher, “He was firm but fair, with a pleasantly mischievous sense of humour.”

Cottell had been with the company since 1927, joining as a body builder at the age of 20. By the 1960s, he was Body Building Shop / Body & Trim Superintendent. Cottell was also Secretary & Treasurer of the Sickness and Dividend Society, of which he was a founding member. He remained with Jensen Motors until 1971, retiring on the 1st October of that year.

Believed to have started at Jensen Motors mid-1960s, and probably remained with them until 1975/76.

Start / Finish dates not known. Groom was working at Jensen in the 1960s.

Believed to have started at Jensen Motors in the mid-1960s, and to have remained with them through to 1975/76.

Started with Jensen Motors during the late 1950s. Took over from Joe Belcher as Foreman after Joe Belcher retired (date not known). Former employee Nick Maltby remembers Moore, “A gentleman in every sense of the word.” Moore was heavily involved in the Volvo P1800 sub-contract development operation.

Possibly starting as an apprentice in the early 1960s, and may have remained at the Company until 1975/76. Former Chief Engineer, Mike Jones, remembers Robinson had a particularly bad head injury after a car accident that took place in the 1960s. Robinson returned to Jensen after the accident, but was badly handicapped.

Started as an apprentice within the Development Department in August 1972.

Transferred from Chassis Mechanical section in 1970. Finish date not known.

REQUEST: The Museum would be very interested to hear from any former employees attached to the Jensen Motors Development Department