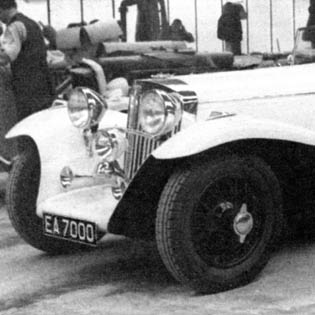 Jensen Motors car number ‘1’ is how John Page (Service Manager at Jensen Parts & Service) referred to the so-called White Lady, when contacted by the car’s owner in the late 1970s. It is generally accepted that the Jensen brothers named their prototype the White Lady, and that name has certainly stuck over the decades since the car was built. Undoubtedly, the most important Jensen car, It would be correct to say, this car represents the point at which the Jensen marque originated. 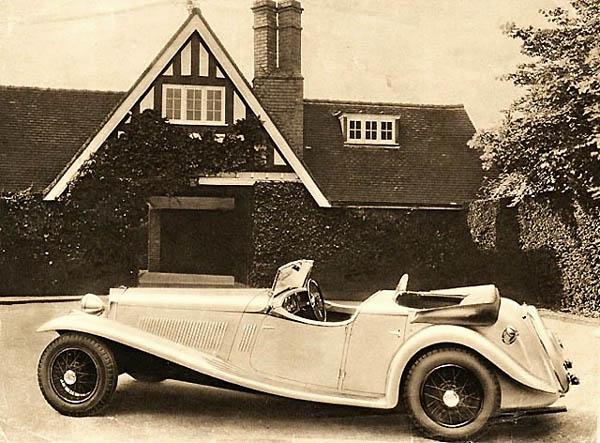 The prototype car (chassis number S1/3799), was started in late 1934, and built up during 1935, using a box-section chassis, and had a drive-train of a 120 bhp Ford 3622cc V8 engine (engine number C18CF4294), coupled with a three speed manual gearbox. This, along with a dual-ratio rear end, provided six effective forward gears. The outcome was a car that had a cruising speed of 60mph at just 2000 rpm, and a top speed of just over 90 mph.

There was just a single scuttle fitted to the White Lady, which meant that considerable heat would get into the passenger compartment. When later production cars were made, they had a double scuttle which helped to reduce engine-noise, and heat.

With a 50:50 front/rear weight ration, the White Lady was particularly stable. It was said that the car could be wound up cleanly around corners, in a manner which would cause lesser cars to slide.

For the time, the White Lady boasted many unique features, including vacuum-operated adjustable shock absorbers, a dual mechanical / electrical fuel system, and solenoid headlight dipping. Practically everything had adjustment, including windshields, driving seat, steering wheel, along with both brake and clutch pedals.

Suspension included transverse half-elliptic springs, both front and rear, with the axles located by diagonal radius rods running to the centre. The Luvax vacuum adjustable shock absorbers had adjustment made through a control fitted to the dashboard for hard and soft settings. 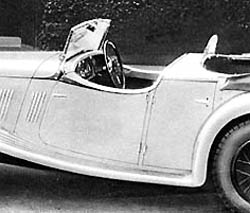 One rear door to the passenger side only, gave access to the rear seating.

With an aluminium-body, the car incorporated an all new slanted front radiator grille, with large chromed surround bearing the Jensen Motors winged badge to the centre front. The radiator was designed by Alan Jensen (helped by his training at Serck radiators).

The car had a long sleek appearance with three doors. Driver, passenger side doors, along with a small single door to the passenger side, which allowed passengers access to the rear seats. The wings were long and narrow, which exemplified the long sleek appearance of the car, but which offered very little protection. The car was finished in the Tourer style, and with a colour scheme of white with brown trim.

While work was carrying on to the White Lady, the Jensen brothers were also completing the first of the new ‘S’ Type, this one being a saloon-bodied car. Lessons already learnt on the prototype (the White Lady) were being changed on what would be the production car. Chassis ‘S2’ was completed around the same time, or not long after the White Lady. 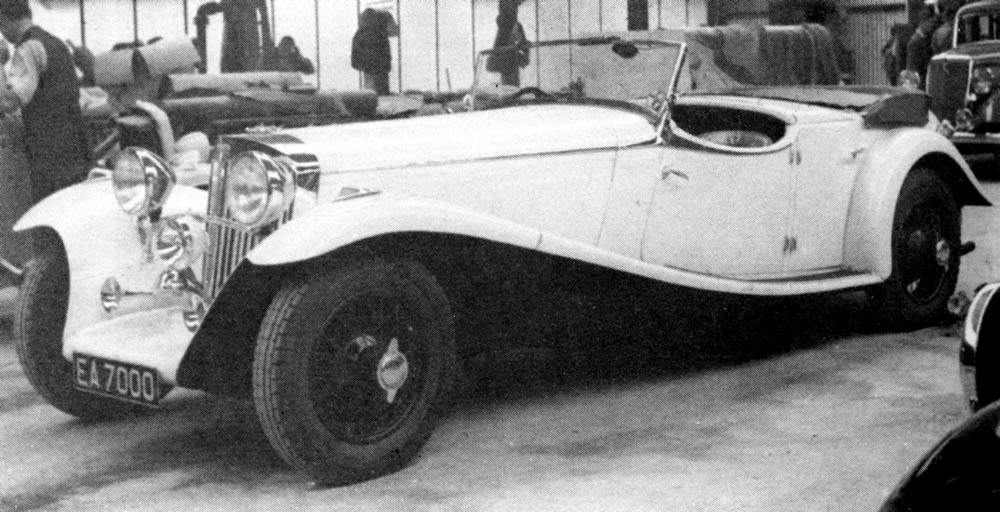 The White Lady at the Carter’s Green factory at the point of completion.

Edsel Ford was visiting England in July 1936, and the Jensen brothers arranged to show him their new car. The White Lady was driven down to London, where Ford would have the chance to view the car. 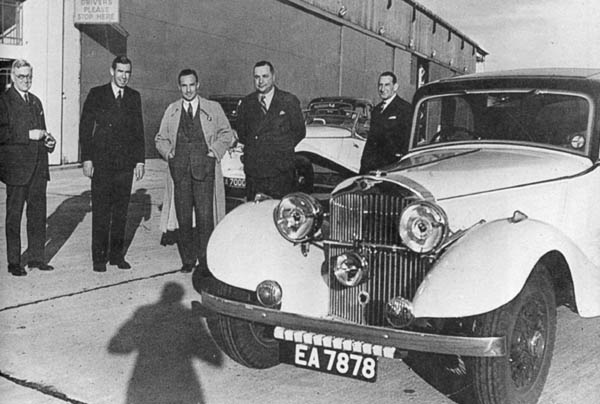 Edsel Ford views the White Lady (just behind him), along with the first production ‘S’ Type.

Long term owner of the White Lady, John Huva, takes up the car’s history from that point. The White Lady was probably sold later in 1936, and was used by its new owner between 1936 and 1939, being laid up for the duration of the Second World War.

After the war ended in 1945, the White Lady was re-commisssioned and used until 1957 (apart from one year, when the then owner was living in Egypt). By then, the car had been sold and was being offered for sale with a second-hand car dealer in Bristol.

Huva, a supervisor for the Spacecraft Division of Telesat, based in Ottowa, Ontario, came over to England for a six month stint. By chance, he saw the Jensen for sale in Bristol and purchased it for the princely sum of £20. The car had covered approximately 51,000 miles at that time. He drove the car whilst he remained in England, and then had the car imported to Canada in October 1957. The journey across to Montreal took place during at the end of 1957, beginning of 1958. Apparently the Atlantic crossing was so cold that the block of the car’s engine cracked.

Once unloaded at Montreal, Huva realised the engine had cracked. Taken to a local garage, a replacement engine was fitted. Huva tried to gain compensation from the shippers, but to no avail. Once road worthy again, the White Lady was used sporadically during the 1960s, but was laid up between 1968 and 1975. Leading up to 1975, Huva had been building a garage large enough to allow him to undertake a restoration of the White Lady.

Ensconced in his new garage space, Huva set about stripping the White Lady. One of the first jobs after removing fixtures and fittings, was to strip the aluminium body of its paint build up. The car had been painted a few times since it left the Jensen brothers back in 1936 – the last coat being in yellow with maroon fenders.

As with many restorations, once the car had been stripped of paint, and with many parts now residing in boxes, work stopped. This is exactly how the car remained until acquired by Canadian vintage car restorer, Rob Staruch and his partner, at the end of 2016. 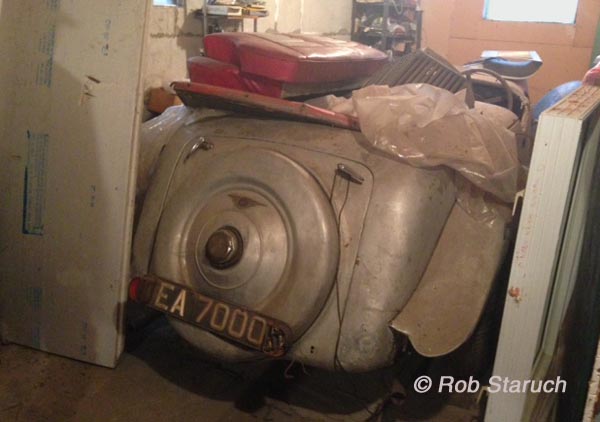 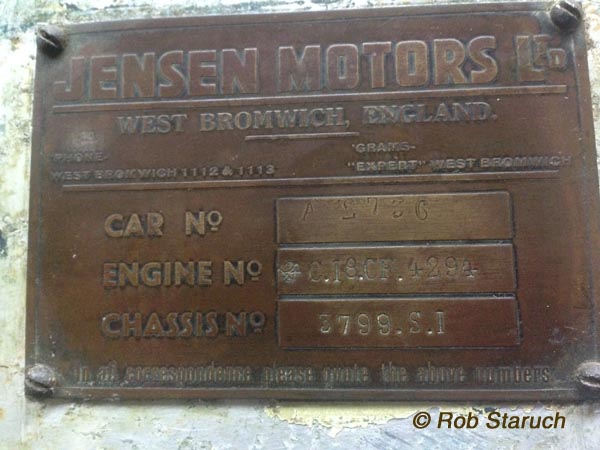 The chassis plate to the White Lady. 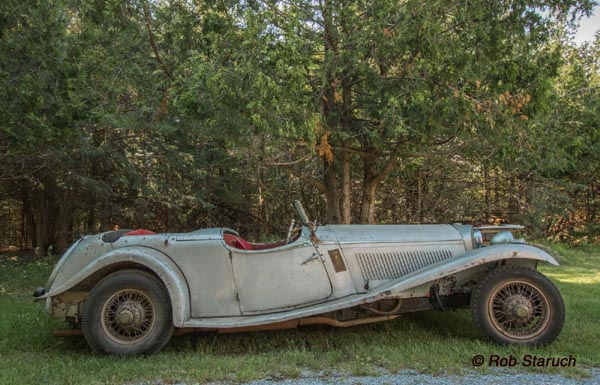 The White Lady photographed in Canada during 2017.

REQUESTS: The Museum would like to hear from anyone with additional images of the White Lady