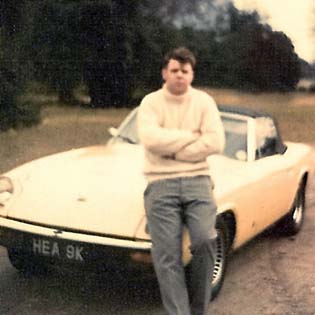 Richard Peckover joined Jensen Motors in 1968, initially working in the Service Department, and then, a couple of years later, transferring to the Development Department. Peckover gives the Museum his recollections of work on the prototype Jensen Healey, leading up to the famous ‘Champagne In Tea Cups’ picture.

I joined Jensen Motors in 1968 working for David Millard in the Service Department. Then, in August 1970,  I was transferred to the Development Department (or ‘Experimental’ as we called it), working for Brian Spicer.  I remained in ‘Experimental’ until the Company closure in 1976, and then continued with Jensen Special Products until I left to join SU Fuel systems in March 1977.

Working in ‘Experimental’ was a fascinating period of my life. It included such work as vehicle testing, brake testing on The Stelvio Pass, and hours of testing at MIRA. It included 18 hour days at Lotus sorting the 907 engines, and even a Sunday afternoon phone call to say a development vehicle had broken down in France, and could I go into the plant to pick up some spares and a car and get down to the ferry that night.

There are just so many recollections that I have from my days in ‘Experimental’, but these are my recollections of the period between early November 1970 and January 1971. I have picked this period for no other reason than I believe it captures the true can-do spirit and comradeship of Jensen.

By early November 1970, the BIW (body in white) assembly of the first 3 Healeys (55001 through to 55003) was well under way. The first body was due into the shop later in the month, to undergo torsional stiffness testing etc. before being trimmed and motorised. The plan being that this build would be completed and the vehicle signed -off for testing late January.

Meanwhile JH1, the Donald Healey built prototype, was being fully utilised for ride and handling test and development. This work had commenced earlier, with a few days of tyre testing at Dunlop’s proving ground at Fradley. These tests were carried out using the standard Vauxhall front and rear anti-roll bars. The tests were to establish the base tyre for the ride and handling tests.

During the next few weeks the dampers tested were changed from Girling ‘Rally-Ride’ to Armstrong, and then finally to Girling gas filled units. During the following few days, new caster control bush inserts were made and fitted.

From the results of this testing several anti-roll bars of varying stiffness were ordered. The plan being to have a day testing at MIRA to establish an initial damper/roll bar specification for the prototype build.

The test was organised for the 2nd week in December, and the MIRA Ride and Handling facility booked. The alternative dampers, anti-roll bars etc were loaded into the departments Vauxhall Viva GT. The only additional component being a very stiff front roll-bar which was fabricated in house, as a last-minute requirement from Brian Spicer.

Brian was to do all the test driving on the day, which was quite normal. He was a brilliant development driver, and could very quickly determine and feedback the effects and adjustments required. The day was dry and cold and the testing went well with several anti-roll bar / damper combinations tested and retested.

Towards the end of the day and before the light finally failed, Brian decided that he would just like to retest the very stiff fabricated front bar. This was quickly fitted, and Brian set off on what we knew would be the very last run of the day, albeit not for the reason we had envisaged!

MIRA’s Ride and Handling circuit; as can be imagined; was designed to subject the vehicle to various adverse road conditions from around the world, ridges, adverse cambers, railway crossing, Australian spoon drain etc. This circuit was closed for a short period each afternoon for the driving direction to be changed.

On this afternoon, it was clockwise running, and as Brian (on a very fast lap) came over the railway crossing and into the Australian Spoon drain, the front anti-roll-bar snapped. The result being that the handling changed dramatically.  The car travelled some distance through the following right-handed banked curve, but with a fair amount of left-hand lock, ensuring its place on the road.

However, as it reached the apex of the curve – at the peak of the banking – the car suddenly snapped left, spinning the car around and destroying the right-hand side against the arrestor cables. Luckily it was a left-hand-drive vehicle, and Brian walked away totally unscathed!

This was to be; in today’s speak; a game changer! We had now lost the use of a development vehicle, albeit only a mule, but creating the possibility of a serious delay in the development program. At least the data collected during the testing was good and could be fed into the build.

The first prototype (55001) was out of the paint shop and now in the development shop, it had undergone initial torsional testing. These tests had shown up a severe body rigidity problem, which had to be addressed urgently.

Obviously until this was rectified the car could not be trimmed and motorised. The body fitters worked flat out adding additional stiffening across the firewall in the form of a square tube at the top of the ‘A’ post, and stiffening was also added to brace the transmission tunnel. The body went back on the rig for retest and the staff made the promise that we would do all in our power to make 55001 fire and run under its own power before the year end.

Additionally, the facia was fitted and as much as possible everything electrically tested. The engine and front suspension was not yet fitted, due to a delay in obtaining a cast component for the gearshift mechanism (at this point we were using the Vauxhall Transmission complete with De Normanville “J” type overdrive).

However, the Jig and Tool guys came up with an amazing solution, producing a fabricated simulation of the missing casting to provide the unique pivot point required in our application.

Christmas Day was a Friday, therefore work wasn’t resumed until Tuesday 29thand there followed some intensive work over the next three days. By 5:30pm on New Year’s Eve, the car was nearing completion.

Then we discovered a problem with the clutch operating mechanism, which needed to be rectified, if our promise of the car moving under its own ‘steam’ before the year’s end, was to be achieved. The mechanism was removed and reworked, and at 8:30pm, the car, as promised, was driven down through the workshop. An unusual way to spend New Year’s Eve to say the least! 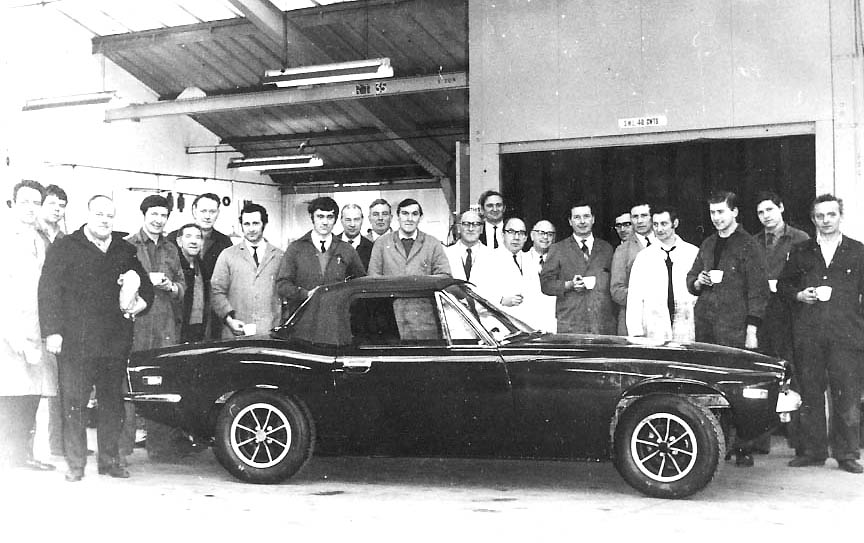 The famous ‘Champagne In Teacups’ photograph. I’m second from the left.

This was the day of course that led to the often-published photograph of the whole department gathered around the car, drinking champagne from our tea cups!

NOTES: The Development Department, was also sometimes called the Engineering Department. Those actually working in that department called it simply, ‘Experimental’.

REQUESTS: Did you work at Jensen Motors in any capacity, if so, would you like to write your recollections of working at Jensen Motors. It doesn’t matter if you do not have writing skills, we can help you with that. please contact us at archive@jensenmuseum.org, or telephone +1694-781354.