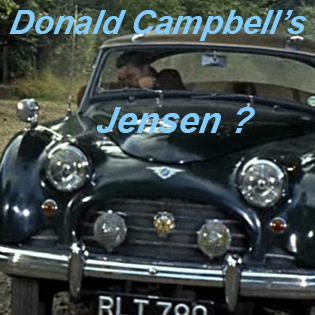 Donald Campbell of Bluebird fame, is believed to have purchased an indigo blue Jensen Interceptor in 1956. However, his daughter Gina, doesn’t remember her father’s ownership of a Jensen, which inevitably casts some doubt on Campbell’s Jensen ownership.

The Museum pieces together some of the life of Donald Campbell, and the history of  Jensen Interceptor chassis number ’74’ (the car believed to have been owned by Campbell). It is hoped further information might be found relating to the car’s history, which might prove Campbell’s ownership.

Jensen Interceptor chassis number ’74’ ( 74 5123 ) was built up at Carter’s Green factory during 1954/55, and was completed on 29th August 1955. The car had a specification of indigo blue paintwork, and beige roof, along with beige trim. 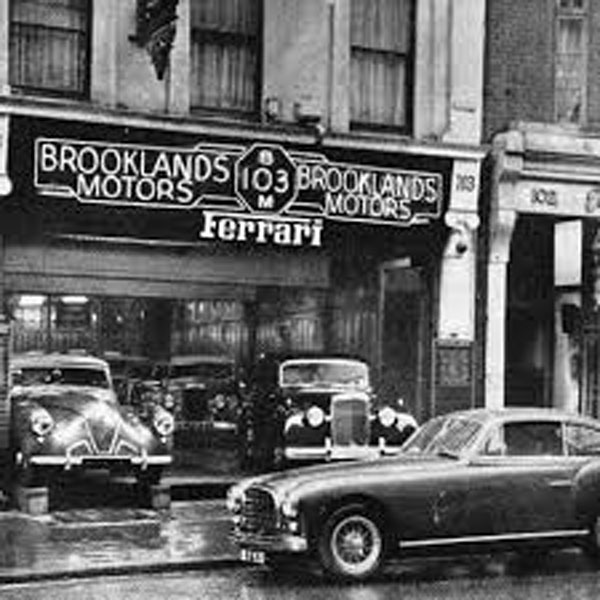 The car was first registered for the road at the beginning of 1956, and was assigned the registration number, ‘RLT 790’.

Donald Malcolm Campbell, was born 23rd March 1921 at Canbury House, Kingston upon Thames, Surrey. He was the son of Malcolm (later Sir Malcolm Campbell), holder of 13 world speed records during the 1920s and 1930s using the Bluebird named cars and boats.

Campbell attended St Peter’s School, Seaford and Uppingham School. At the outbreak of the Second World War he volunteered for the Royal Air Force, but was unable to serve because of a case of childhood rheumatic fever.

Unable to get into the RAF, Campbell joined Briggs Motor Bodies Ltd in West Thurrock, where he became a maintenance engineer. Subsequently, he became  shareholder in a small engineering company called Kine engineering, producing machine tools.

Following his father’s death in 1948, Campbell decided to take up where his father had left off. He wanted to continue the legacy of setting speed records and, with the assistance of his father’s chief engineer, Leo Villa, carried on the Bluebird name. 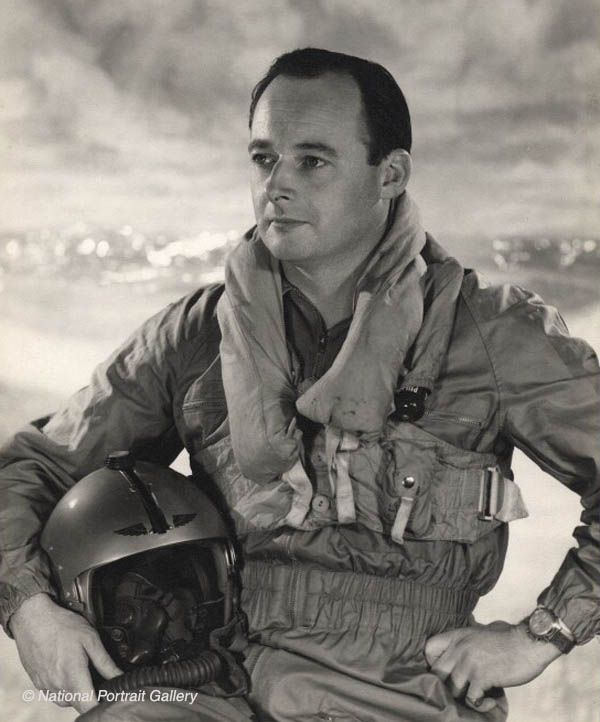 Interestingly, Campbell was intensely superstitious, hating the colour green, the number thirteen and believing nothing good ever happened on a Friday.

During the 1950s and 1960s, Campbell managed to break eight absolute world speed records on water and on land. Campbell remains the only person to to set both world land and water speed records in the same year (1964).

Campbell was killed on 4th January 1967 during a water speed record attempt at Coniston Water in the Lake District, England.

It stands to reason, that someone so committed to speed, would also drive some of the most fast and interesting cars of the time.

That said, Campbell was very much an anglophile in regard to his car choices – and outside of just one, always purchased blue cars.

It is believed that Campbell purchased the first-generation Jensen Interceptor in 1956. The indigo blue car being chassis number ’74’. Other cars included an AC Ace, Aston Martins and an E-Type Jaguar (all blue painted).

There was one ‘wild-card’, that being a non-blue painted, non-British made, Mercedes-Benz 300 SL ‘Gullwing’.

For the time being we cannot state for sure that Campbell owned Jensen Interceptor ’74’. His daughter, Gina, has confirmed to the Museum that of all the cars she remembers her father owning, the Jensen Interceptor wasn’t amongst them.

She remains convinced he never owned a Jensen (in fact Gina Campbell herself, has in the past enjoyed Jensen ownership, having owned a couple of 1970s Jensen Interceptors during the 1980s).

Other sources, such as freelance journalist, Gillian Carmoodie are convinced Campbell did own the car, and states this in her published article in Classic Car Weekly (April 2017).

Jensen historian, Richard Calver, also states in his publication, Jensen – The Chassis Data, that Campbell owned Interceptor ’74’. Although today, he isn’t sure where that information derived from.

Proof positive is obviously needed, be it a photograph of Campbell with the Jensen, or access to the original old green logbook (if it still survives).

However, outside of the debated ownership of the Jensen by Campbell, Jensen Interceptor chassis number ’74’ does have another claim to fame.

In December 1962, the comedy film, The Fast Lady, was released, opening at the Odeon, Marble Arch. The film starred Stanley Baxter, Leslie Phillips and Julie Christie, with Ken Annakin directing.

The film’s name was taken from the name of a 4.5 litre Bentley, which is used throughout the film. The easy going plot centres around a naive Scotsman (Stanley Baxter) who buys a vintage Bentley – aptly named The Fast Lady – and learns to drive in order to impress the daughter of an arrogant aristocrat who despises him.

Jensen Interceptor chassis number ’74’ played a part in the film, being driven with its correct on-road registration  plates of ‘RLT 790’.

We do not have any information about the ownership of the car at the time it was used in the film. 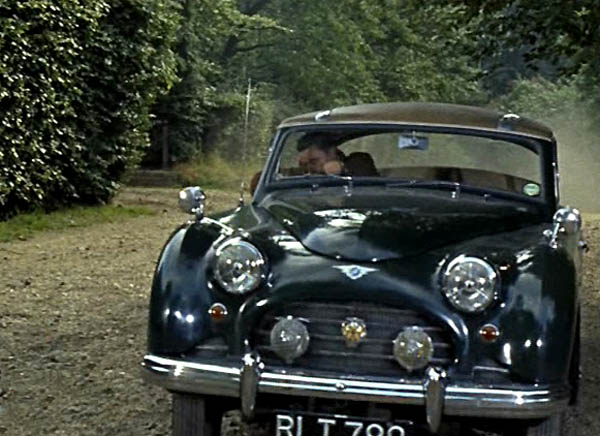 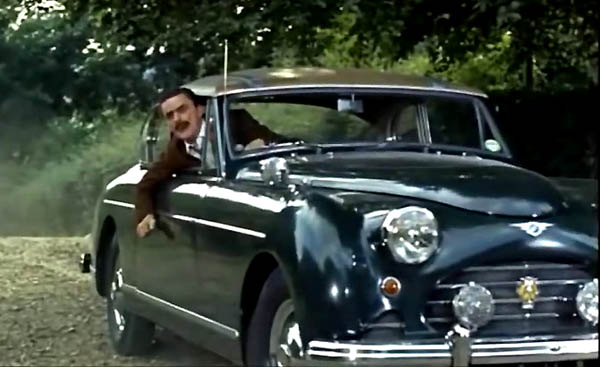 Another still from The Fast Lady. 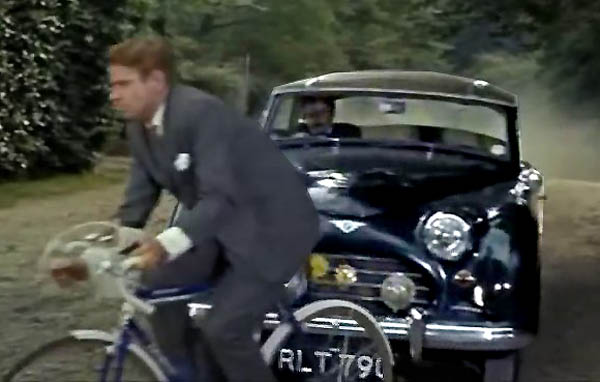 Baxter on a pushbike with Interceptor ’74’ looming towards the bike.

Having been employed in the fil, The Fast Lady, Interceptor ’74’ found itself carrying on a film career a year later in 1963. The film, The Marked One, was directed by Francis Searle, and released in 1963. The car steals the opening of the film. 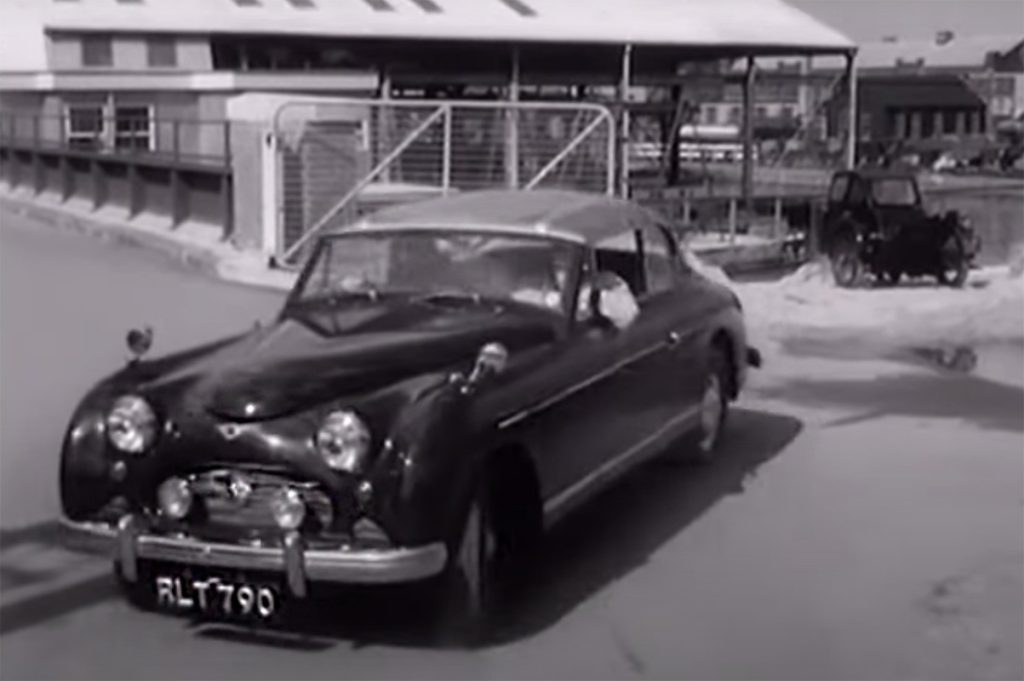 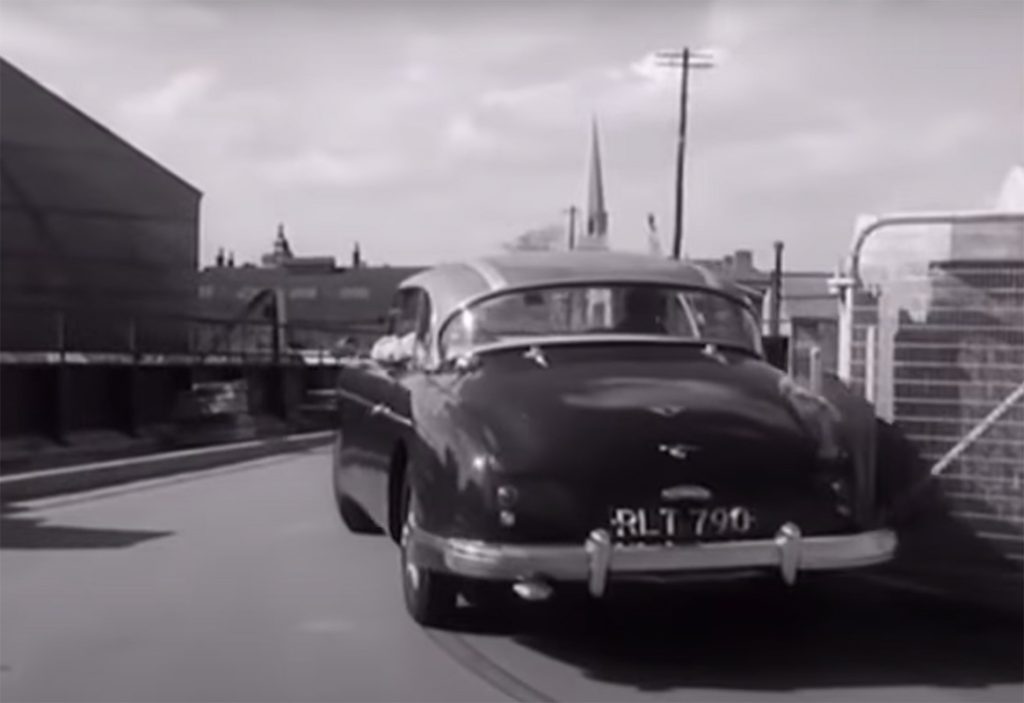 Not much is known in regard to the survival of Jensen Interceptor chassis number ’74. The Jensen Owners’ Club  have a membership application form for Interceptor ’74’, dating from 1979.

At that time the car is still listed as indigo blue with a beige interior and beige roof. The member resided in Coventry.  The Museum has also been told that former Jensen Owners’ Club historian, Keith Cerinno may have owned this car in the 1990s. The Museum has not managed to make contact with Cerinno.

ASSISTANCE: If anyone has further information concerning Jensen Interceptor chassis number ’74’, we would be very interested to hear from them.

NOTES: Journalist, Gillian Carmoodie, wrote a feature in January 4th, 2017 Classic Car Weekly, stating Campbell had owned a 1955 Jensen Interceptor. The Museum wrote to her asking where she had found that information from, but had no response.