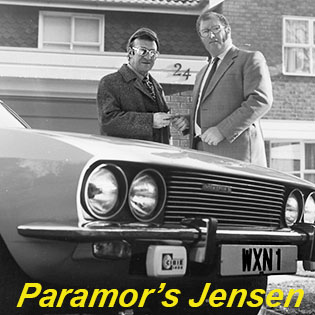 Perhaps today, the name, Norrie Paramor, isn’t recognised by many, outside of those into the history of pop music.  Back in the swinging sixties, Paramor was one of EMI’s top producers of pop music and rock & roll, and even teenagers of the day would have known his name.

The Museum looks at the epic career of Paramor, his association with singer Cliff Richard,  and his ownership of a Jensen Interceptor. 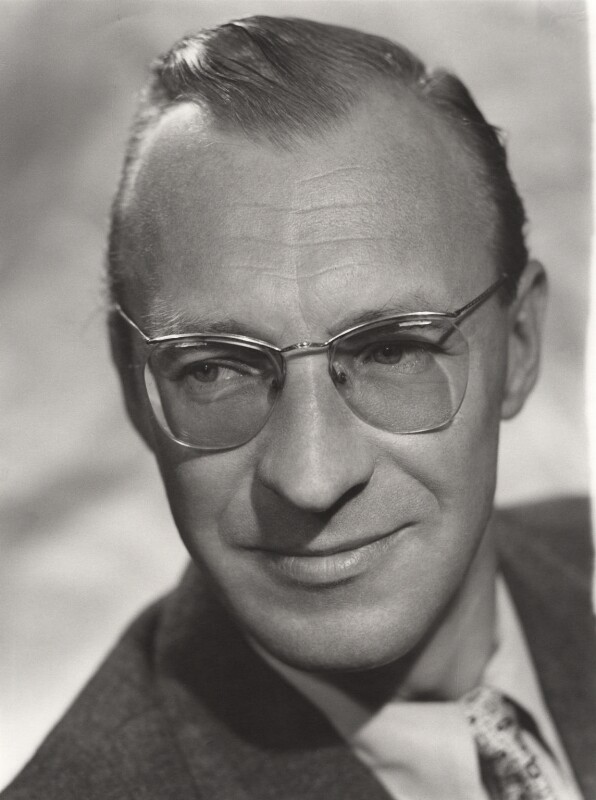 Born in London in 1914, Paramor trained as a pianist. In his early twenties, Paramor became a piano player and arranger for Jack Harris’ and Maurice Winnick’s dance bands.

Directly after World War II, Paramor played the piano with the Pieces of Eight band led by Harry Gold. But, life as a performer didn’t particularly appeal to him, and after five years Paramor gave it up to concentrate on studio work, with an emphasis on arranging and conducting.

Paramor’s first work as a studio musician was playing accompaniment on singles by Marie Benson. He initially joined EMI Records as a conductor leading his own pop orchestra.

Those recordings and the periodic ventures that followed, would keep Paramor’s name before the public, with records that fit nicely alongside the work of Paul Weston and other easy listening bandleaders of the period.

In 1952, Paramor began producing records for EMI, as the head of A&R for its Columbia label. By late 1953, Paramor had chalked up his first major hit with Eddie Calvert’s single “Oh Mein Papa”. 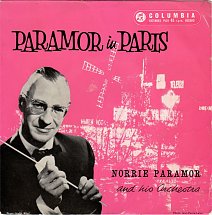 “Paramor In Paris” was released in 1958. Typical easy listening music of the late 1950s.

Another Paramor discovery, Ruby Murray, was even more important to the label, scoring a huge hit in 1955 with “Softly, Softly” and numerous other chart successes’.

During the remaining 1950s,  Paramor continued to be associated with pop music. He created two good-selling studio orchestras, the Big Ben Banjo Band and the Big Ben Hawaiian Band. Both orchestras recorded and appeared on the BBC.

Incredibly, the two bands became so popular, that Paramor (who had specifically wanted to stop working on the road in 1950) had to organize touring editions of both bands, to satisfy the demand for personal appearances and dance concerts.

By 1955, changes started overtaking popular music in England. A distinctly teenage audience were emerging at that time. This relatively small (at this time) new audience had its own characteristics and taste, and started out around skiffle music.

However, skiffle was going to be short-lived, as by 1957 it was starting to give way to a rock & roll sound. Initially, the British recording industry looked for bands that sounded like Bill Haley & His Comets (Haley having toured England, and being a model that the companies understood), but other influences included Elvis Presley, and  Buddy Holly.

The outcome was, that by 1958, British record labels were looking for homegrown talent that could pull these sounds together.

Norrie Paramor won the home-grown talent competition for EMI, scoring the first and the biggest in mid-1958, when he signed Cliff Richard and his backing band the Drifters (later rechristened the Shadows).

For EMI this gave them one of the biggest stakes in the world of pop music, particularly for a record label having no presence in that field.

The relationship between artist and producer was ideal. Paramor, a middle-aged man in suit and with glasses, didn’t come across as your typical rock & roller. But that wasn’t what was needed. The Shadows themselves could supply that expertise (and even the songs and instrumentals on occasion).

Paramor’s expertise was as careful arranger and all round professional musician. He helped Cliff Richard & The Shadows achieve a level of polish on their records – without costing them any excitement in their playing.

However, Paramor’s judgment wasn’t always perfect. On their debut single, Paramor was trying to push his choice of an A-side, a romantic rocker called “Schoolboy Crush,” until television music impresario Jack Good persuaded him that the B-side (an exciting original by bandmember Ian Samwell called “Move It”) would be the hit.

In fairness to Paramor, however, he had chosen to record “Move It,” and lavished no less attention on that side than he had on “Schoolboy Crush” once he was convinced that it would be the hit.

And once it was a hit, Paramor lost no time in recording Cliff Richard and the band playing – what was then – hard rock & roll. Indeed, when it came time to record Cliff Richard’s first album, ‘Cliff’, Paramor did something unheard of at the time, either in England or America.

Paramor made the decision  to record it as a live album, cut by Cliff Richard and the band in front of several hundred screaming fans in February of 1959 – albeit in the relatively controlled conditions of EMI Studio Number One.

That album proved a landmark in the history of rock & roll, as well as the first major live album by a white rock & roll performer. The album continued to serve as the blueprint for an idea that Paramor’s younger contemporary, George Martin, of Parlophone Records, had four years later.

When it was time to record the Beatles’ debut album, he asked them to just play their set as they did at their shows. In fact Martin originally wanted to cut them playing live at the Cavern Club, but in the end decided against it. 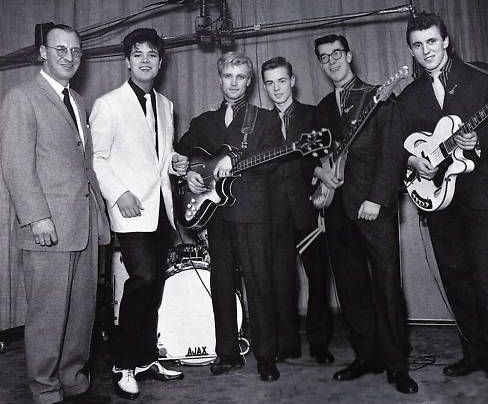 Paramor (extreme left) next to Cliff Richard and The Shadows. Photograph taken not long after Paramor had discovered them, circa 1960.

In the early 1960s, as Cliff Richard’s sound evolved, some of his sides were cut with the Norrie Paramor Strings and other studio groups under the direction of the producer, and Paramor also played piano on some Cliff Richard and Shadows recordings.

Paramor and EMI were to find that some of Cliff Richard’s rock & roll sides didn’t sell as reliably as they’d hoped. This led him to move the singer in the original direction he’d thought of, into a more romantic, pop-oriented sound (“Living Doll,” etc.), similar to what Ricky Nelson was doing in America.

The results didn’t please Cliff Richard’s hardcore rock & roll fans, but yielded millions more sales. In any case, there was plenty of rock & roll on his early albums, even if the singles moved toward a softer – more commercial – sound.

And when Cliff Richard and The Shadows started recording separately, EMI-Columbia ended up with two top-selling artists. Certainly their millions of sales were later eclipsed by the success of the Beatles, but Cliff Richard & the separated Shadows continued to perform well for EMI. It was amidst this financial success for Cliff Richard, that he purchased a Jensen Interceptor in 1969. 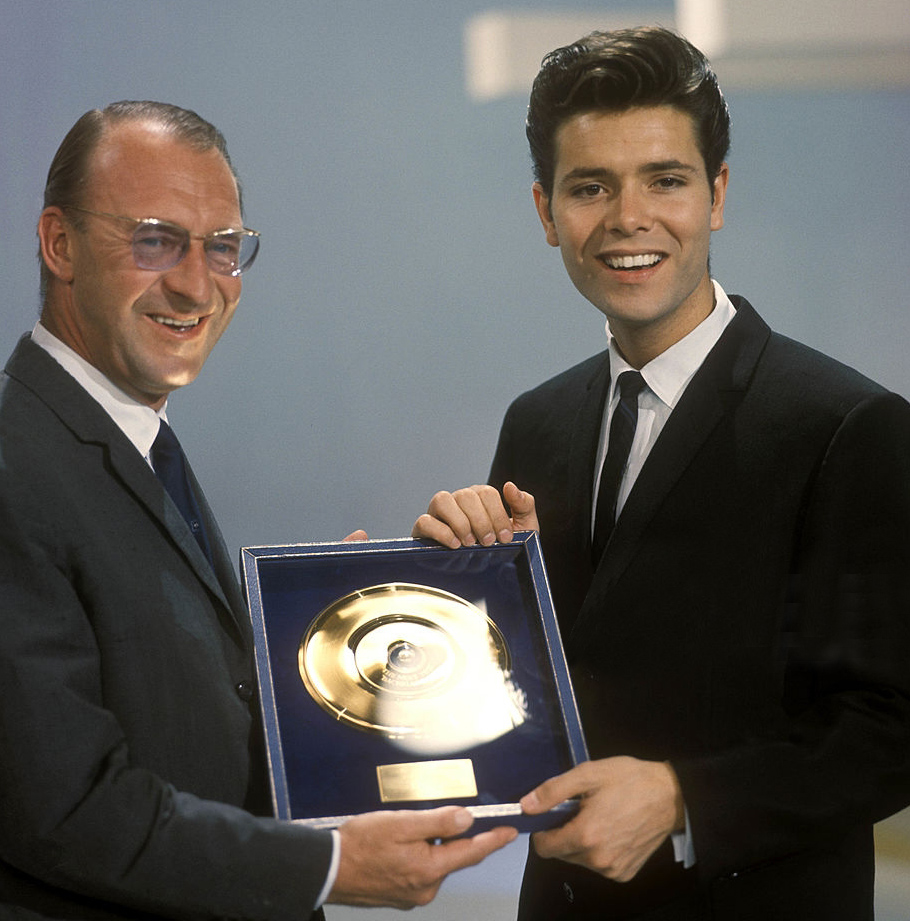 Paramor and Cliff Richard holding a gold disc for “Next Time” & “Batchelor Boy”.

Paramor continued to work with both Cliff Richard and The Shadows for more than a decade, even as he added other top acts to the list of talent that he discovered – such as Helen Shapiro and Frank Ifield.

Other work during this period included producing recordings by Judy Garland, Gene Vincent, and Al Martino. Meanwhile, in the background, he continued his own work as a bandleader, producing his own recordings of mood music.

Paramor’s own music did extremely well, especially in England and America.  Songs such as  “In Love”, “London After Dark”, and “Amore, Amore!” were very strong sellers in America, where ironically, few knew of Cliff Richard at that time.

EMI in the 1960s, however, wasn’t the same organization that it had been in the 1950s, nor was the record business the same. Sales were soaring astronomically, especially in England, and the music business was booming.

Many of the record companies were losing some of their best producers. These included George Martin and Ron Richards, who were being short-changed by their work at smaller label imprints like Parlophone. For them, there was more money to be made and better musical opportunities by pursuing a career on their own.

Paramor was considered one of EMIs major assets, a successful recording artist as well as a producer who’d generated many millions of pounds for them. EMI treated Paramor well, but even he left in early 1968, to become an independent producer with his own company. That same year, he scored a number one hit with the Scaffold’s “Lily the Pink.” 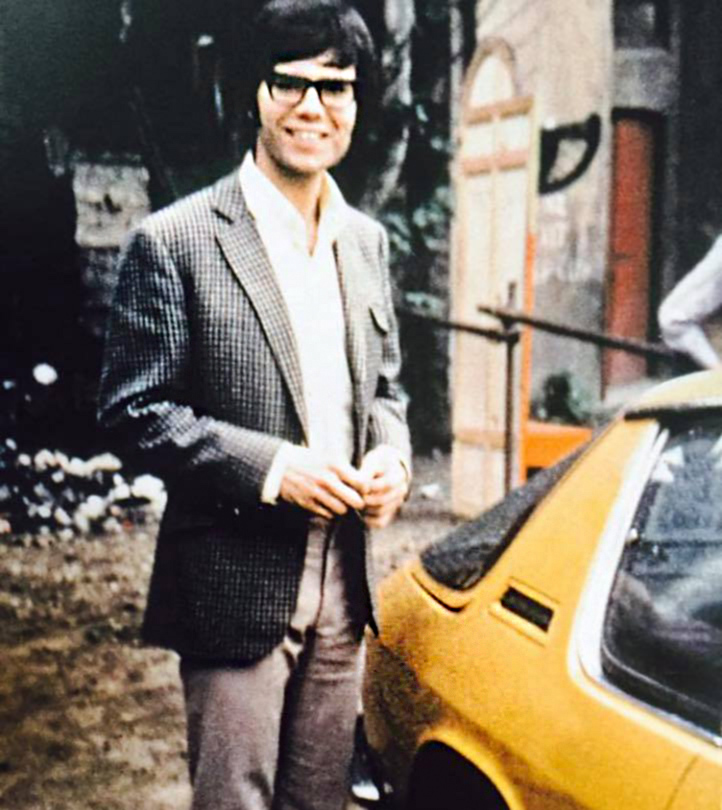 Cliff Richard with his MK.I Interceptor (chassis number 115/3234). The car was Positano yellow with black trim.

Paramor became the music director of the BBC Midland Radio Orchestra in 1972, and held the post through to 1978. The new job led Paramor to move from London to the Midlands.

It was while working as music director that Paramor decided to purchase a Jensen Interceptor in 1973.

Cliff Richard had purchased his Interceptor some years beforehand, back in 1969. With Paramor’s close contact with Cliff Richard, it does make one wonder if that is where the first seed of thought was put in place.

In fact even the colour specification of the two cars was similar. Cliff Richard’s car was yellow with black trim, and so was Paramor’s – albeit with a different shade of yellow, and a black vinyl roof (a prerequisite of the 1970s).

Paramor ordered his car through the Jensen distributors, Mann Egerton. The MK.III Interceptor (chassis number 136/9090) was ordered with a specification of yellow paint, with black vinyl roof, and black leather trim. Paramor’s private registration of ‘WXN 1’ was assigned directly onto the car.

As with the golfer Tony Jacklin, Mann Egerton were not going to allow Paramor to slip through the net without gaining some publicity from the sale.

Egerton’s Sales Manager, David Dixon, drove the car to Paramor’s home, where a local newspaper was on hand to  photograph the handover of the keys. 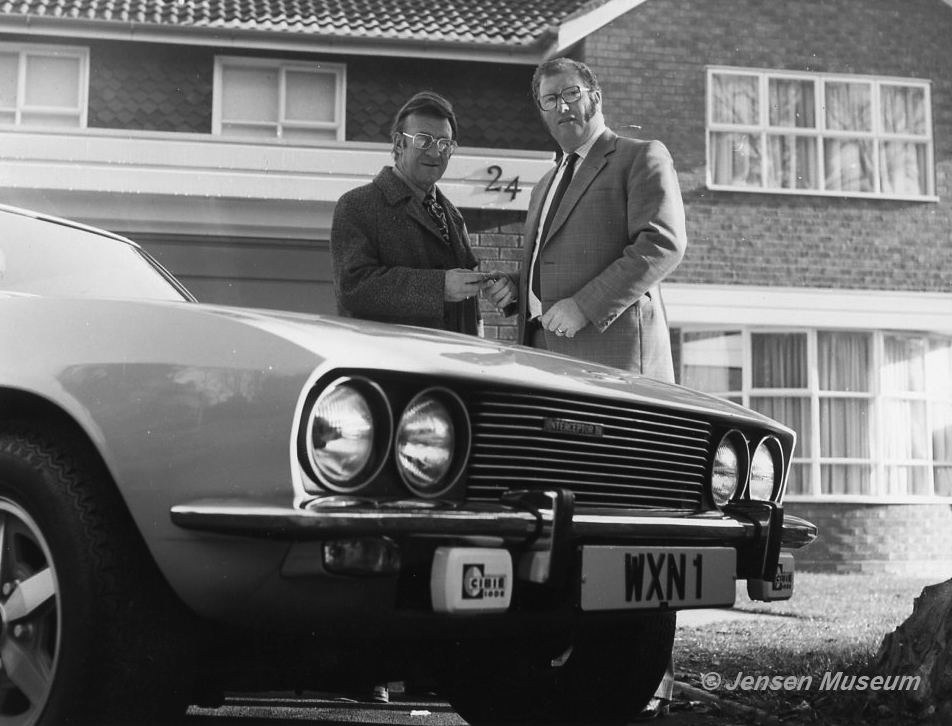 Paramor died in September 1979. From the point of discovering Cliff Richard, he continued working with him as producer and advisor until his death. Cliff Richard dedicated his next album to Paramor’s memory.

It is presumed that Paramor had sold the Interceptor before his death in 1979. Certainly the ‘WXN 1′ registration number had been removed by the time the Jensen Owners’ Club had included the car on their database of member’s cars.

The Jensen Owners’ Club database gives a registration number of ‘RYJ131M’ against 136/9090. However there is also a paper index file probably dating back to the 1980s mentioning the number ‘SOL388M’.

One previous owner of 136/9090 is shown as a Mr Clements from Hampshire. There is also a reference to the car having been colour changed to red.

According to Jensen historian, Richard Calver, Paramor’s Jensen Interceptor survives today, and is located in New Zealand (2020). When the car was exported from the UK to New Zealand isn’t known.

The Cliff Richard Interceptor (chassis number 115/3234 registration ‘VYX 500G’), had become extremely rusty by the 1990s. According to Jensen Owners’ Club member,  John Edwins, the car was scrapped in 2002, the then owner of the car being unaware that Cliff Richard was the first owner.