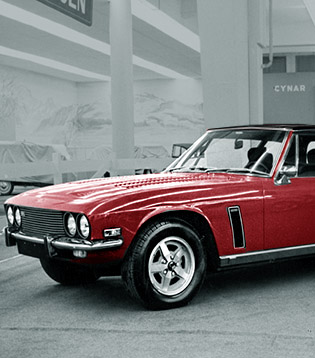 Jensen SP 132/5577 was one of only thirteen left-hand-drive SP cars to be built. This stunning flag red Jensen SP was destined for the Jensen stand at the 1972 Geneva Motor Show. The Museum looks at the history that is presently known of this car, and hopes that further information might become available.

The left-hand-drive Jensen SP chassis number 132/5577 was ordered by the Swiss Jensen distributor, Edgar Schwynn. The car was required in time to go on the Jensen stand at the Geneva Motor Show for 1972.

It would be at the Geneva show of 1972, which was also the event the official launch of  the Jensen-Healey would be taking place.

But for the largely Swiss public attending the show, it would also be their first chance to see the Jensen SP.

Jensen SP chassis number 132/5577 was given a specification of flag red with black leather trim. A good stand-out colour scheme for the show.

The car was completed on the 29th February 1972, and made ready for shipping over to Geneva in March.

The Jensen stand at the Geneva Motor Show was run by Edgar Schwynn. He had taken over as the Swiss Jensen distributor in 1969, after Monteverdi had all but given up on the Jensen brand.

Schwynn financed most of the stand at the show, with Jensen Motors making a contribution. The cars on the stand would have been purchased into stock by Schwynn, but were often shipped out direct from West Bromwich to Geneva, ready to go on the stand.

Typically, the cars would have been taken over in an enclosed car transporter, so that minimum cleaning and polishing was required on stand. 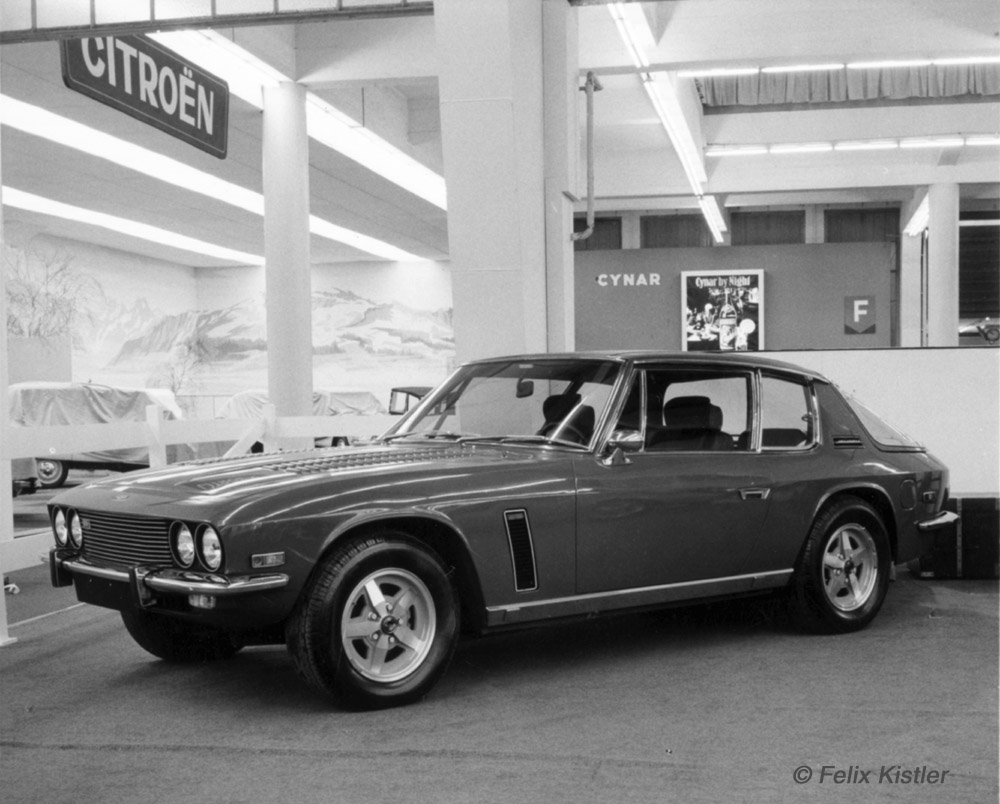 Jensen SP 132/5577 in position on Schwynn’s stand at the Geneva Motor Show.

Another view of Schwynn’s stand at the Motor Show. The photograph shows a good side-view of the SP, along with two further Interceptors. 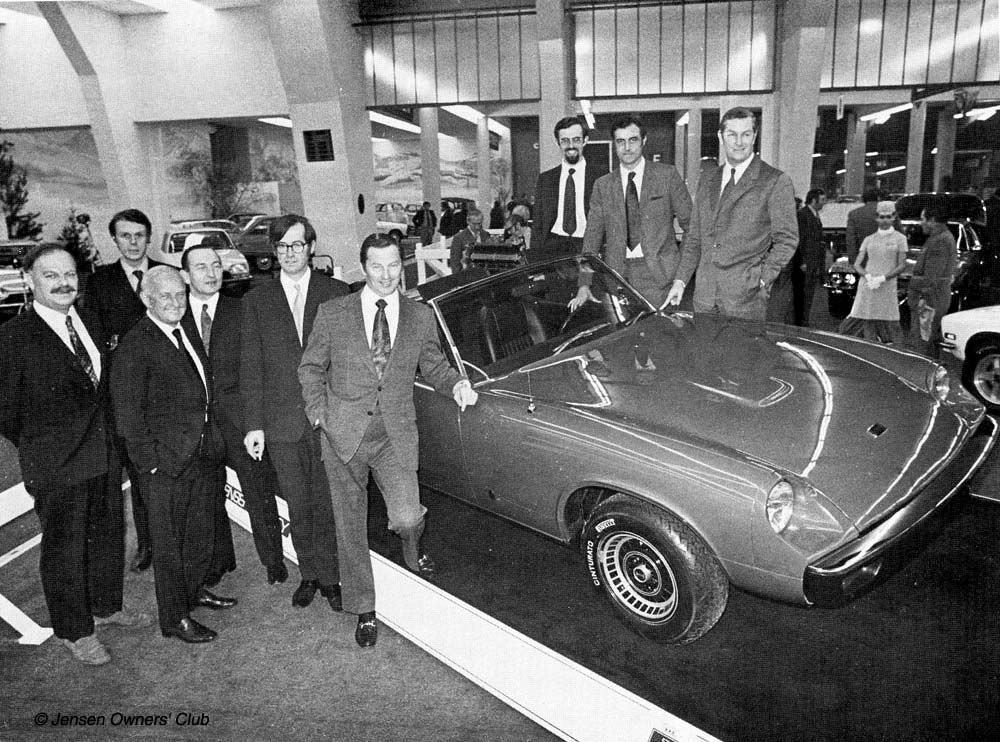 With the official launch of the Jensen-Healey at the 1972 Geneva Motor Show, this was the car of the moment. All the Jensen-Healey key players were present, left to right: Geoffery Healey, Tony Good, Donald Healey, Alfred Vickers, Kevin Beattie, Kjell Qvale, Tony Marshall, Ian Royal, Richard Graves. Jensen SP 132/5577 can be seen at the back of the stand with its tailgate up.

Tony Marshall, former Sales Manager at Jensen Motors, remembers the SP being overshadowed by the launch of the Jensen-Healey at the Geneva show. That said, with two Interceptors, and the SP on the Jensen stand, there was still plenty of interest in the V8 Jensens.

Outside of the buzz around the Jensen Healey, the SP was also attracting attention. There was two very different types of customer for the Jensen Healey and the Interceptor / SP, and Jensen were still well known for their top level V8 cruisers.

Amongst those with a general interested in the Jensen SP, one man had a more decisive take on the new ‘Six-Pack’ car.  A Swiss businessman had come onto the stand, and after quietly looking around the car, entered into discussion with Schwynn.

He wasn’t interested in putting his name down for a car, he wanted to buy the flag red SP then and there – and Schwynn wasn’t about to say no. The flag red SP was sold the first day of the show.

The car remained in Switzerland until 1978, and was then sold to Gerhard Henze of Tettnang, Germany.

Cornelius Richter from Frankfurt, Germany, acquired the car from Frey. He kept the car until 1987 and sold the car to Stephen O’Brien, an American who was living in Germany at the time.

Once at Jensen Cars, Lotwis had asked for a range of restoration work and upgrades. These included a body restoration, to include one of the Company’s new series 4 front under-bumper spoilers, and a full repaint in green. Electric door mirrors were to be fitted, along with a Gear Vendors overdrive unit.

The completed SP was shipped back to New Jersey for Lotwis in 1993, and kept by him until 2006. At that time, Lotwis had decided to dispose of his collection of Jensen cars, and so the SP was destined to be sold.

Bob Clevenger from California agreed to buy 132/5577, travelling to New Jersey, and driving the car back to California. Clevenger picks up the story,

“My friend Dan and I flew to New Jersey, arriving around noon on the 7th of June [2006]. Mike Lotwis picked us up at La Guardia airport, New York City, in the SP.

We then drove off to a New Jersey Motor Vehicle Commission office to get a temporary licence to drive the vehicle to its new home. Over all we put 3000 miles on the SP and achieved an average of about 17 miles per US gallon.” 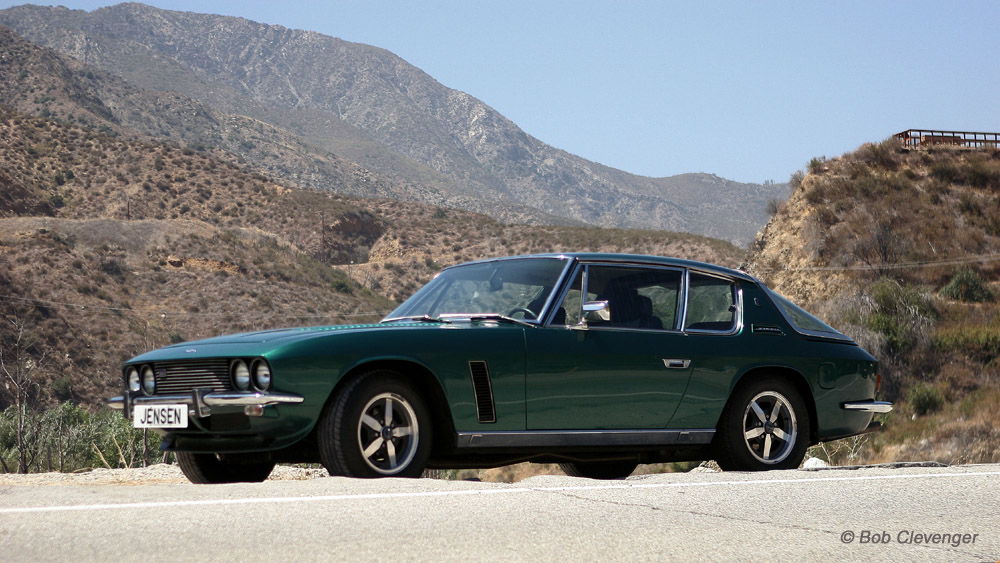 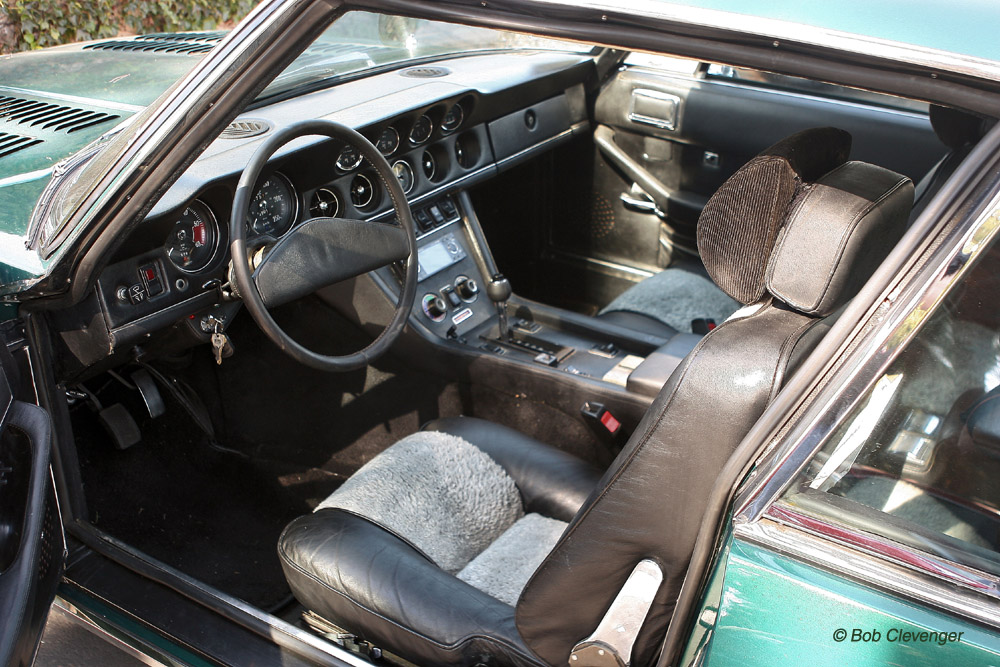 Interior view of 132/5577. The sheepskin seat inserts were a later addition. Photograph taken in 2006. 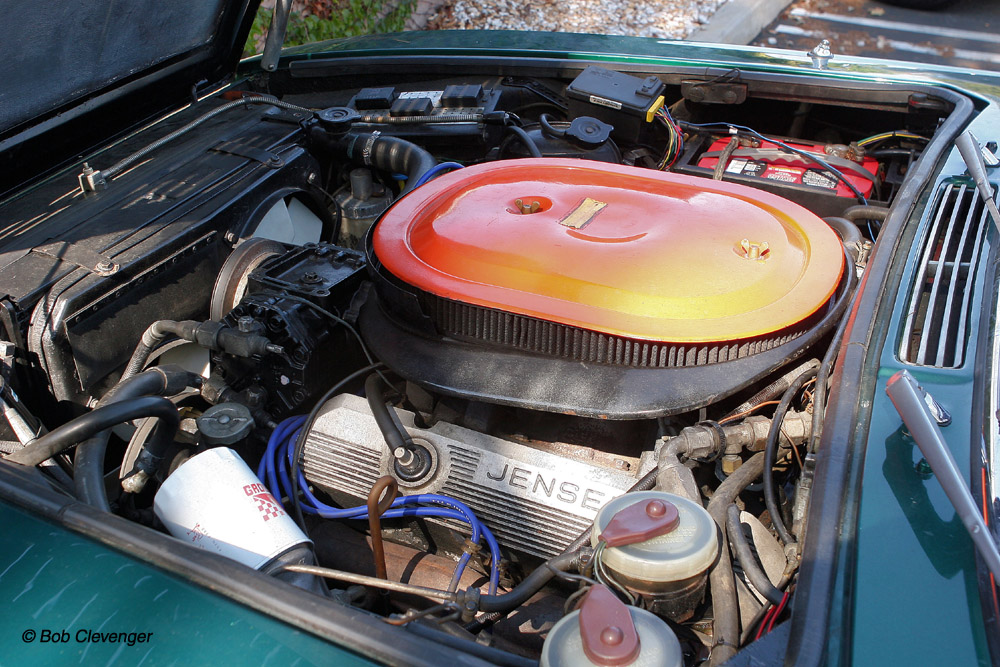 View of the engine-bay. The Six-Pack carburettor system still in place. Photograph taken in 2006.

Once in Clevenger’s ownership, he continued to make various changes and upgrades to the SP. These included a full rebuild of the SP engine, and the fitting of a 4 speed manual gearbox. Other changes included fitting a wood console to the interior along with various non-standard switches. Interior view of 132/5577. This photograph was taken during Clevenger’s ownership. Various further modifications were made to the interior, including a revised wood veneer centre consul. Photograph taken 2015.

Clevenger kept 132/5577 until 2016, but by that time had decided to sell the car. There was a variety of reasons, but as Clevenger states, most decisions come down to money, and money had something to do with the disposal of the Jensen.

The SP was sold by Clevenger to Neil Jaffe, the owner of the Californian classic-car dealers, The Chequered Flag. Jaffe had the car painted back to flag red. Afterwards, the car was initially offered for sale through Kastner’s Garage, Los Angeles, before being offered through The Chequered Flag. 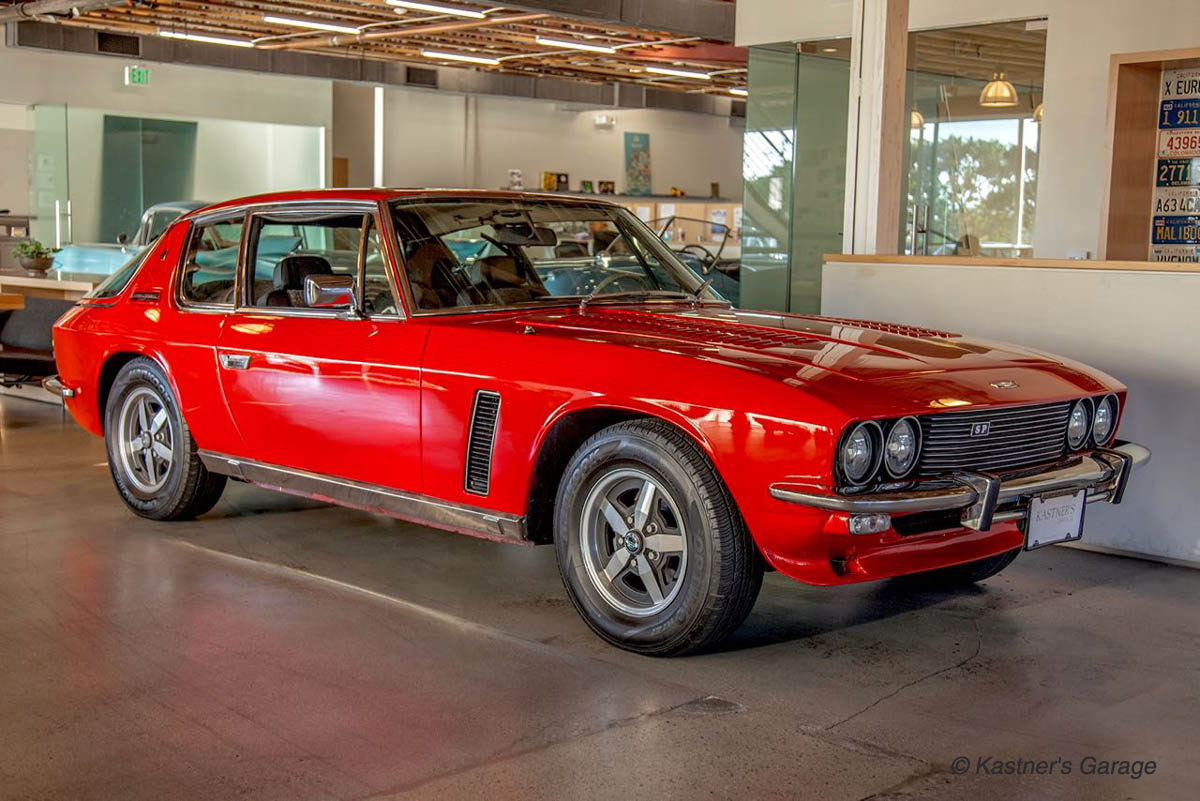 132/5577, now back to its factory Flag red paint, and sitting in the showrooms of the California-based classic car company, Chequered Flag. Photograph taken 2016. 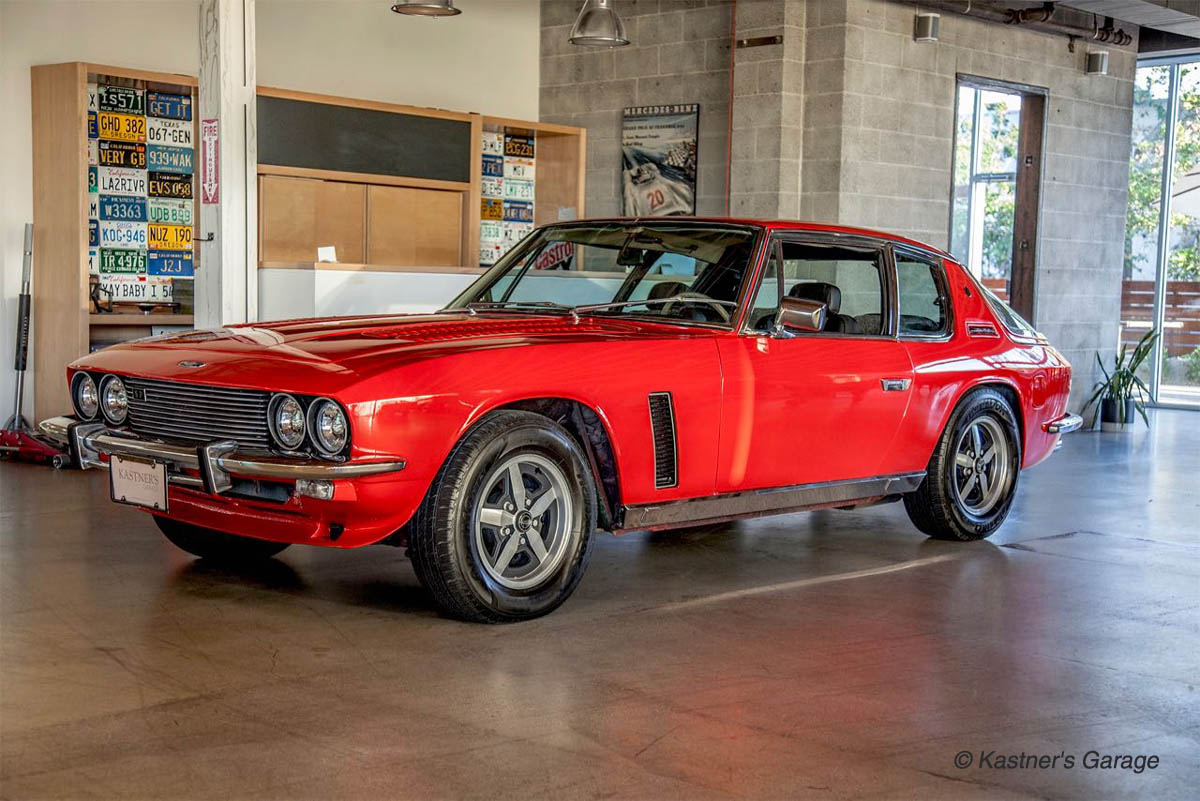 Another view of 132/5577 sitting in the showrooms of the California-based classic car company, Chequered Flag. Photograph taken 2016. 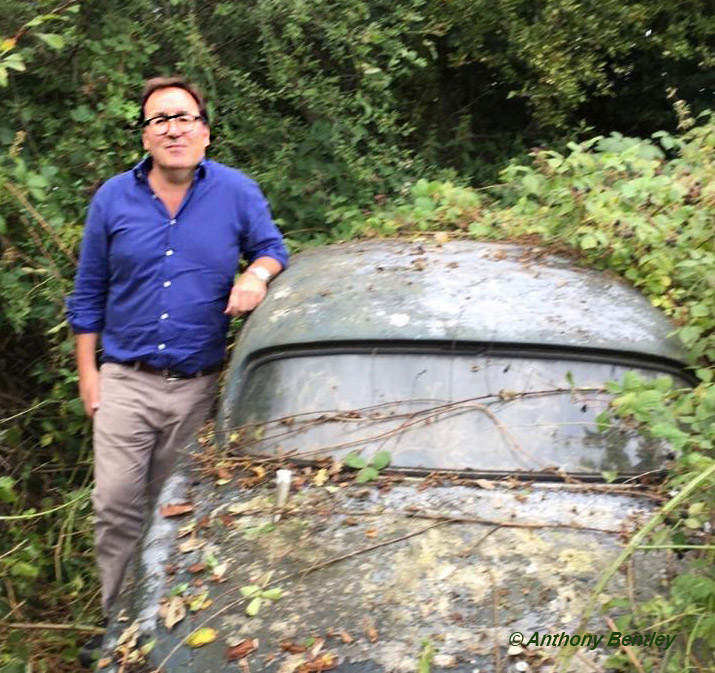 Andrew Cassar next to a long abandoned CV8, which he discovered in 2015.

Andrew Cassar is a name tightly woven into the tapestry of Jensen cars.

As a young boy, he was subjected to enthusiasm for the Jensen brand via one of his brothers, Frank.

The enthusiasm rubbed off, and as Cassar moved from private school through to adulthood, his chosen career was trading in classic cars.

It wasn’t any surprise to those round him, that amongst a variety of top level classic cars, such as Bentley, Aston Martin & Mercedes-Benz, Jensen also featured prominently within his buying portfolio.

In fact he probably had more Jensens through his hands as all the other makes together. Where Cassar often won out over other classic car dealers, was his unbelievable tenacity.

It didn’t matter where a particular car was located – if he was interested, Cassar would be on the next plane to clinch the deal.

However, completing the deal on the Jensen SP would be much more straightforward.

Constantly trawling the internet for suitable cars to buy, it wasn’t long before Cassar came across the rare left-hand drive Jensen SP for sale.

He already new Jaffe, as he had purchased cars from The Chequered Flag previously. As such, Cassar didn’t need to jump on a plane to view the car and clinch the deal. Cassar mentioned his purchase of the Jensen SP to the Museum,

“When I saw on the internet that the Chequered Flag were selling the SP, I got straight on the phone to Neil [Jaffe]. Luckily, I already knew him, and had done a couple of other deals with him. He’s an okay bloke, and straight to deal with, once you get him out of ‘bullshit mode’. “

It just took a 30 minute telephone call for Cassar to clinch the deal on the SP. In early 2018 Jensen SP chassis number 132/5577  was on its way back to England.

After 132/5577 was imported back into the UK, Cassar evaluated the car. Understanding of the special historical place this SP had within the world of Jensen cars, he took the decision to put as much of the car as possible back to original.

His notes from the time give indication to the work that was required to bring the car back to some reasonable sense of originality,

“The body and chassis survives in excellent overall condition,  generally free from rust. A restoration of the car took place at Jensen Cars between 1991 and 1993. At that time, in addition to some body restoration, a full series 4 under-body spoiler was added, and the car colour changed to green.

During 2016, the car has had a poor repaint to the cars original flag red colour. I’ll have the car stripped back, and resprayed again in flag red. Due to the excessive work involved in changing the entire front under-body spoiler assembly, I will leave this in place.

Mechanical work, various work will be undertaken to remove modifications put in by Clevenger. These include replacing the manual gear box for a correct HP automatic transmission. Refitting a York air-conditioning system. Refitting the correct SP type exhaust manifolds.

The interior has been heavily modified. Initially by Jensen Cars for Mike Lotwis, and then by Bob Clevenger. Jensen cars re-trimmed the interior with sheepskin inserts to the seats.

My intention is to acquire an original black leather set of interior trim, and fit it back into the car. The horrible cheap looking wood console will be removed and an original fitted back, along with all correct switches and gauges. I’m also going to find and fit back the original type Learjet A-250 ‘8’ track player.”

Cassar managed to acquire an original black leather set of trim, and this has now been fitted back into the car. The wood console has been replaced by an original, and all switches and gauges put back to original.

Additionally, Cassar sourced a rare Learjet A-250 ‘8’-track / radio unit (the type which had been fitted to the car originally), and has had that unit put back into the console.

By the end of 2019, much of the ongoing work to the SP was completed, including another full respray in Flag red. Cassar had found an original black leather set of trim, and fitted this into the car. The wood console has been replaced by an original, and all the switches and gauges put back to original specification.

Additionally, Cassar sourced a rare Learjet A-250 ‘8’-track / radio unit (the type which had been fitted to the car originally), and had that unit put back into the console. In fact there was just some overall final finishing, and the car was going to be placed up for sale. 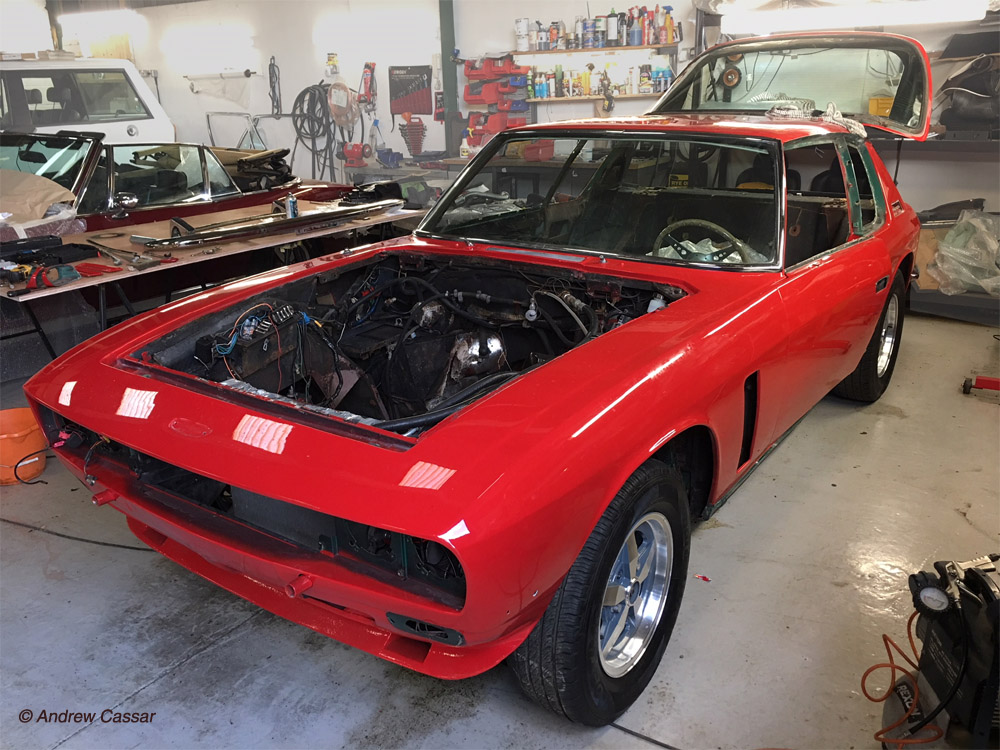 132/5577 back in England at the workshops of classic car dealer, Andrew Cassar. According to Cassar, the repaint in Flag red was very poor. he had the bodywork refinished, and resprayed again in Flag red. Photograph taken in 2019. During various disassembling, the car’s chassis number ‘5577’ was found stamped to the inside of the sidelight bodies. Since these were finished to each car, they were generally stamped with the car’s number. Overspray of the former green paint is still visible.

In December of that year, Cassar had a heart attack and died. It was a shock to many in the classic car motor trade, as Cassar was only in his early fifties, didn’t smoke, and was generally fit.

Since Cassar’s untimely death, most of his car stock has since been sold on behalf of the family, however, his son has decided to keep the SP.