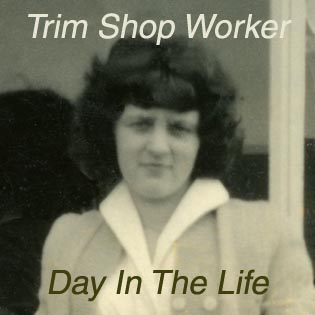 Sandra Bath (later Sandra Nation) joined Jensen Motors  just before Christmas 1960. Bath started work in the Trim Shop stuffing seats. Later she put the fastenings onto the carpets, and worked the machine that put the windows in the soft-tops of Austin Healey cars. Bath worked at Jensen Motors between 1960 and 1966.

I turned 18 years of age in December 1960 and I was looking for a job. I lived in Leebank Road, Hayley Green, Halesowen, with my mum and dad, Lizzie and Les Bath. My uncle, Arthur Shilvock, worked at Jensen Motors in Kelvin Way, West Bromwich.

Arthur asked his friend, Gilbert Hughes (who was working in the Trim Shop at Jensen Motors),  if there was any vacancies in the Trim Shop, as I was looking for a job. I was told to come to the factory for an interview and was offered the job almost immediately. I started work just before Christmas 1960. 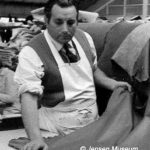 Gilbert gave me a lift to the Kelvin Way works every day from the Shenstone Roundabout. My dad would drive me from Halesowen to West Bromwich, and Gilbert would pick me up at the roundabout.

As well as working in the Trim Shop, Gilbert was also the shop steward for the union at Jensen.

At night he would drop me back off at the roundabout, and my dad would pick me up, and take me back home.

It was good that I didn’t have to travel on the buses, particularly in the morning, as it was an early start at Jensen (we started work at 8a.m. in the Trim Shop).

My work in the Trim Shop was varied. I started out as a ‘stuffer’ (stuffing car seats). After I had worked there a while, I also fitted the windows in the soft tops of the Austin Healeys, and put the metal fastenings in the carpets.

As you would expect, I got to know a few people in the Trim Shop. My boss was Jim D’Maine. He was a lovely man, always fair, and always ready to help you if you had a problem. There was quite a large group of us in the Trim Shop. I think there were about 40 of us in total.

I was friends with Brenda Kerrigan.  We often went out at lunchtime in her car, up to West Bromwich town centre. There was also Dave Smith, who fitted the seats on to the frames, and Jeff Smith, his nephew, who also worked in the Trim Shop.

Although my uncle’s friend, Gilbert Hughes, had been shop steward, he had been voted out around 1963 for another chap, Chris Francis. He was trying to get pay increases, which didn’t go down well with management, so this was leading to some strikes.

We would be working hard and would hear someone shout “Down your tools!” so we had to stop. Depending on the issue we would be sent home, or we would sit about, waiting, sometimes all day. We would have a laugh and a chat with the machinists. Then we would hear “Back to work!” and we would start working again. Sometimes we were sent home and told we didn’t even have to come back the next day.

There was a time in 1963 when we were only working 2 days a week for around 4 -5 months. I think it was because we didn’t have enough work to work full time [this was due to fluctuating demand for the Healey, which at some points meant there wasn’t enough work. Some employees were being laid off, and then quickly re-hired when demand came back].

I met my husband Frank Nation at Jensen. His dad, also called Frank, was an Inspector there, and asked around for a job for young Frank. Young Frank joined Jensen in early 1961 as a labourer, unloading and loading boxes on the lorries and general labouring work. Sometimes, young Frank had to bring boxes of materials up to the Trim Shop, and we started chatting.

It didn’t take long for him to ask me out, and then we started going out together. We married in 1962. Frank only worked at Jensen for about a year, then managed to get a job at Brockhouse castings in West Bromwich, as the pay was a lot better. 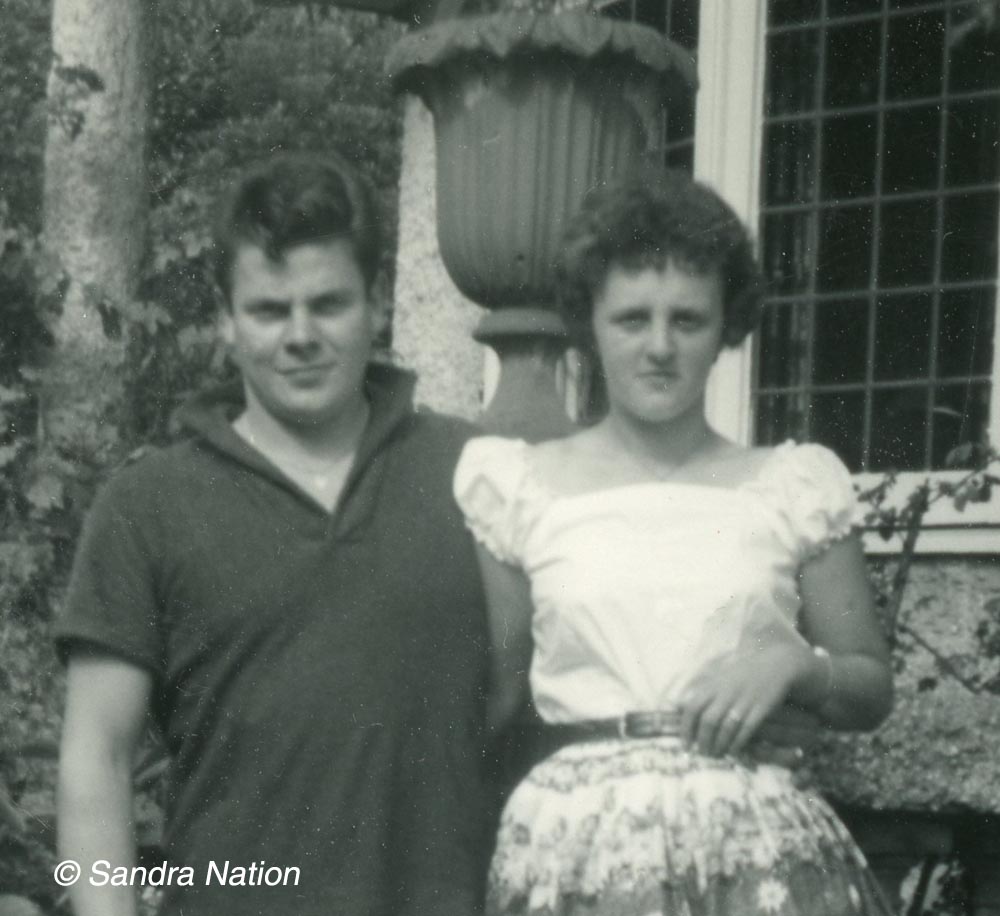 Frank Nation (jnr) and Sandra Bath. They married in 1962.

Frank only stayed at Brockhouse for a year or two, afterwards getting a job at Austin – Rover, where he stayed for 38 years.   I continued to work at Jensen until October 1966, when I went on maternity leave.

I remember the first Jensen Interceptors coming from Italy, these were just beautiful, real quality, and the most wonderful streamlined body.  My first daughter, Linda, was born in January 1967 and I didn’t go back to work after that.

Jensen Motors was a wonderful place to work. I really enjoyed my time at Jensen. The people were very friendly and the company looked after us well. I also have a soft spot for Jensen because it was where I met my husband, Frank.

7.30a.m. – Dad drops me at the Shenstone Roundabout. Gilbert is already waiting for me. It doesn’t take us long to get to Kelvin Way, where we park up and walk into the factory.

8a.m. – We have clocked in,  and I have walked over to my bench. I’m starting off on seat stuffing today, although depending on what work is waiting, it could just as easily be carpets to add fastenings to, or Austin-Healey soft-tops. My work appeared at the end of my bench; seats to stuff with a cotton kapok-like material.

8a.m – 9.30a.m. I stuffed seats until breakfast break, which was about 10 minutes. We had kettles, teapots, cups, tea and milk in the Trim Shop and made our own tea.

10.30 a.m.- About 10.30 the wages are brought up to the Trim Shop and handed over to Jim [D’Maine]. Lots of brown paper envelopes, each with our names on. Jim comes around handing us our envelopes. Its always an exciting moment, being given our envelope, and the Trim Shop goes quite for a short time while the men and us girls open our packets. Our wages could vary a bit because some of our jobs were on piece rate, and others were on fixed rate, but on average I was getting about £25 a week, that was pretty good wages for us girls at this time.

11.00a.m – Today was a bit of a special day. The pop singer, Susan Maughan, was going to be turning up at the factory. News had got around, and we were all excited to see her. She arrived about 10.30, but since we were up in the Trim Shop, we weren’t sure if we would get to see her. However,  Jim has mentioned that she was going to be shown around the Trim Shop.

As you can imagine, all us girls were looking at each other with excitement. It was around 11.30 by the time she came up the stairs. Next thing, there she is in the Trim Shop, followed by one of the bosses, who introduces her to Jim. 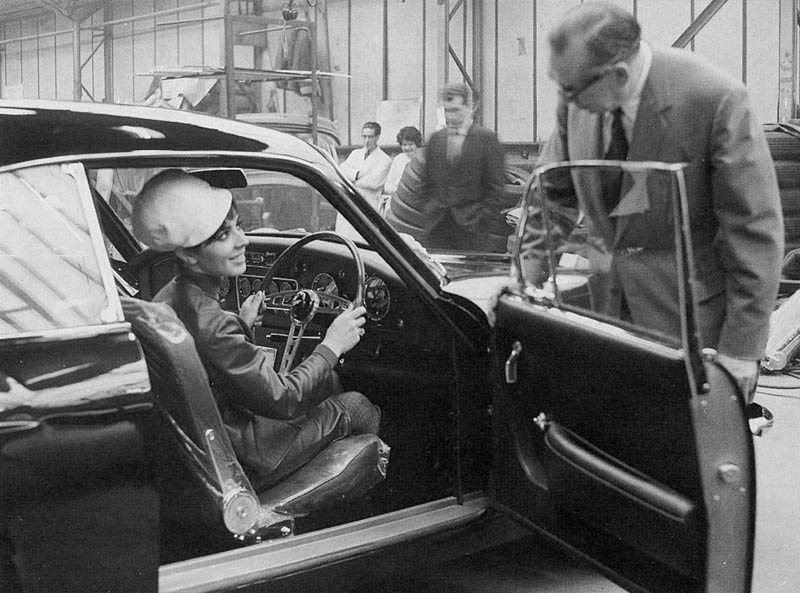 Susan Maughan gets the chance to sit behind the wheel of her new CV8. Richard Jensen, who took her around the factory, stands by the door. In the background, wearing a white coat is Harry Taylor, Foreman Inspector, and by his side is, Jessy Poutney, car cleaner. The suited man remains unidentified.

Susan looked amazing. She was a petite girl, and I’m surprised that such an incredible voice can come out of that little body. She was wearing this black leather jacket and skirt, and had high black zippered boots, along with a lovely white hat with a peak on it.

We are all quite, and getting on with our work, as Jim tells her how the seats are made. She is really interested to know how the leather seats are fitted onto the frames, so Jim shows her. She must have been in the Trim Shop for a good 15 minutes or so, and seemed really interested in everything that was going on. Then it’s time for her to go. As you can imagine we were all talking about her afterwards.

12.30 a.m.- We have about 45 minutes for lunch. Sometimes I would go into West Bromwich town centre with my friend, Brenda. If the weather was cold or rainy we stayed in the factory, eating our sandwiches and all of us congregating around the machines to laugh and chat. Today is quite nice weather, and Brenda suggests that we go off to town and do a bit of shopping. We gobble down our sandwiches on the way to town, park up, and go off around the shops, ending up in Marks & Spencer. 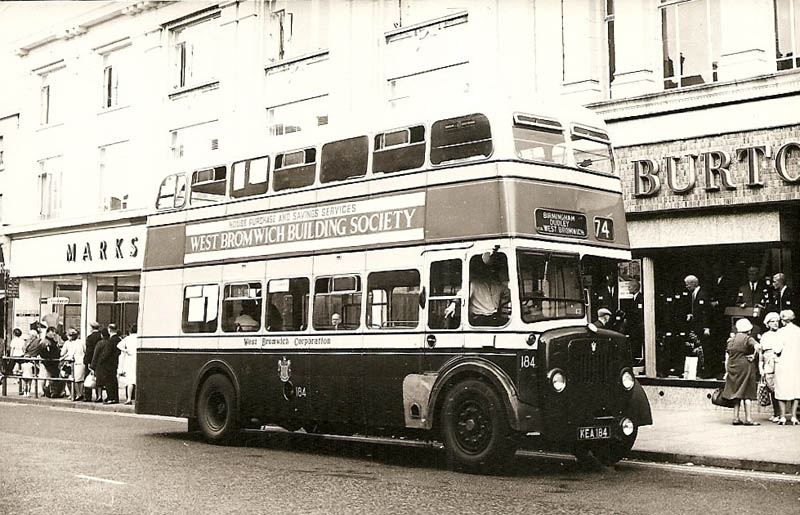 Brenda has parked her car up the top of the high street near the clock tower. So we walk back up, and pop into Robinsons and buy a cream cake each to have with our afternoon tea. Certainly not an everyday occurrence, but a special treat, since it was pay day. 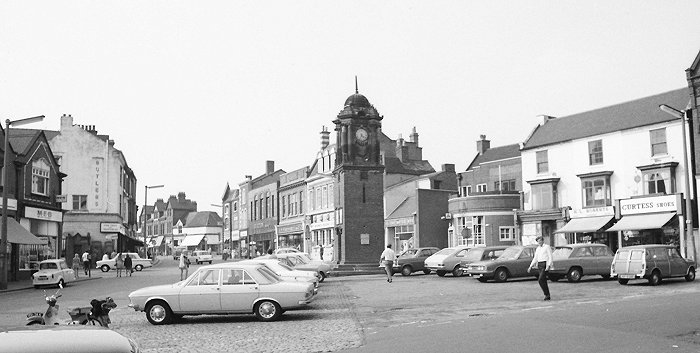 The clock tower at the top of West Bromwich High Street.

1.15p.m. We just about get back to work in time. I had finished all the seats that needed stuffing, and there wasn’t any more waiting for me. So, I’m asked to go on the machine which fits the windows into the soft tops of Healey 3000s. By this time I was pretty used to the machine, and quickly get to work placing the material flat into the machine.

I am working on the machine through until 3.15 when we stop for a 10-minute tea break. I’m chatting with a couple of the other girls, and yes, we are still talking about Susan Maughan’s visit.

3.25p.m – Tea break over, and I get back onto the machine. I work through until 5.00, by which time I’ve finished my last soft top, and tidied things ready for the next day.

5.00p.m. – Gilbert [Hughes] gives me a wave, as he is giving me a lift in his car to Shenstone roundabout. And yes, you guessed it, we ended up talking about Susan’s visit to the factory.

REQUESTS: Did you work at Jensen Motors in any capacity, if so, would you like to write a typical ‘Day In The Life’ of yourself at Jensen Motors. It doesn’t matter if you do not have writing skills, we can help you with that. please contact us at archive@jensenmuseum.org, or telephone +1694-781354.