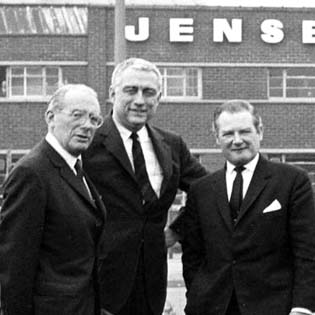 Arriving at the Jensen factory in January 1968, turnaround man, Carl Duerr, took Jensen Motors by storm. Using every possible initiative to put Jensen Motors On The Map, Duerr, within months of his appointment as the new managing director, asked David Brown, the owner of Aston Martin, over for a luncheon and tour of the factory.

It must have felt like a meeting with a giant, when Brown was dropped in by his own ‘DB’ branded helicopter. This was the early days of helicopter landings at Jensen Motors, when they came down on the field immediately in front of the Jensen factory. 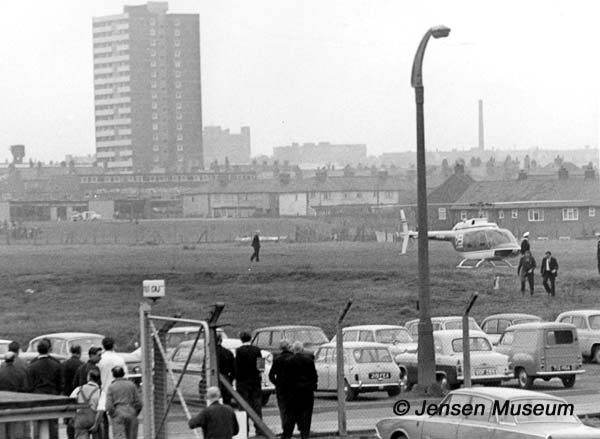 David Brown’s helicopter touches down in the field to the front of the Jensen factory. According to former assembly worker, Clive Kendrick, he believes this and the other photographs were taken around lunch time, and that is why so many workers had come out to see the landing. Kendrick recognises some of the workers just by the gate. The man in the white foremans coat is inspector, Harry Taylor. The man just behind him (looking towards the gate) is fellow assembly worker, Graham Swewin. The man in lighter (brown) overalls with back to the camera is Harold Evans.

If VIPs were arriving by helicopter, Jensen were required to telephone the police and fire brigade, to make them aware, and these services were supposed to be on hand for the arrival and take-off.

Not that this was always the case, former Sales Manager, Tony Marshall,  remembers when Peter Brewer, owner of the Jensen distributors, Wilmslow Garages, turned up  at Jensen Motors.

Brewer was expected at the factory, but had failed to tell them he was dropping in by helicopter. Brewer’s audacious arrival caused some consternation with Jensen management, but luckily everything went without a hitch.

David Brown’s arrival at the Jensen factory was a more formal affair, with the services contacted in anticipation of the landing, and on-hand at the point of arrival.

Helicopter landings at the Jensen factory seemed a far cry from the days of Carter’s Green. It heralded a new era of flamboyant industrialists, and even more flamboyant celebrities.

Brown’s arrival by helicopter would mark the start of flying into West Bromwich. In fact, according to Marshall, it led to Jensen creating a private helicopter landing pad at the back of the factory.

That said, it certainly was not that helicopter drop-ins were occurring on any regular basis. But, the simple process of painting a large white ‘H’, on the tarmac area at the back of the factory, was a marvellously inexpensive statement.

One might ask why David Brown was so keen to accept an invitation to visit Jensen Motors, when he owned the significant prestige car brand, Aston Martin – surely he wasn’t considering the purchase of an Interceptor or FF ?

History doesn’t tell us if Brown had ever flirted with the idea of a Jensen purchase. Owning Aston Martin, one would have expected Brown to drive one of the cars bearing his own initials – but he never did. Jaguar cars tended to be his personal choice.

The fact was, Jensen had become the new car of the moment. Long gone was the dinosaur CV8 – the new Interceptor & FF, with their beautiful Italian clothing, were the new catwalk favourites.

Aston Martin had seen their sales dipping, and their cars looking, well, perhaps just a little overshadowed by the new Jensens. Brown could hardly refuse such an invitation. Duerr was giving him the opportunity to see first-hand what was going on at Jensen. The worsening finances at Aston Martin led Brown to eventually sell the Company off in 1972.

Brown’s visit was a matter of huge excitement at the Jensen factory, undoubtedly exaggerated by his helicopter landing. Those that could leave their posts, or were on lunch break, had come out of the factory to watch the landing, while staff in the canteen on the upper front of the building had premier view of the proceedings. 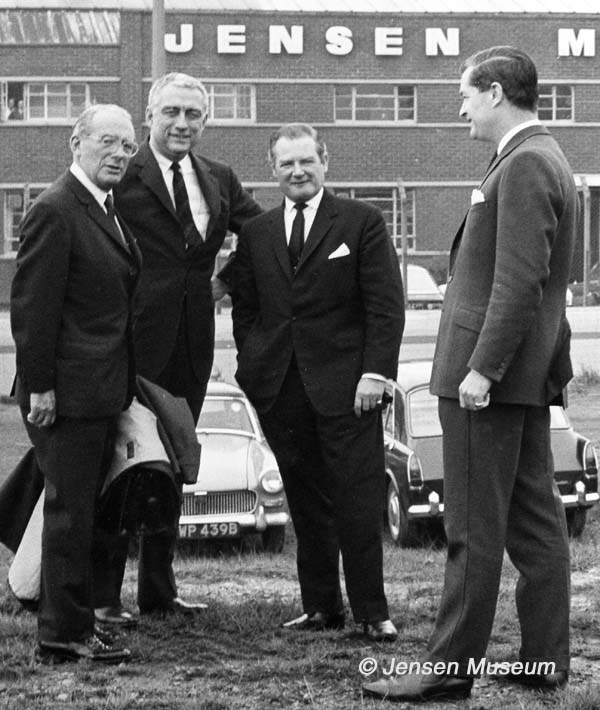 From left to right: David Brown, Carl Duerr, John Boex, and Richard Graves. The upper story with windows under the Jensen Motors sign was the canteen, staff members can be seen looking out on the proceedings.

On Brown’s arrival, he was met by Carl Duerr, John Boex (head of Norcros Bankers) and Sales Director, Richard Graves. Works Manager, Bill Sylvester, was also there to be introduced to Brown. It would be Sylvester’s job to assist with the guided tour of the factory. 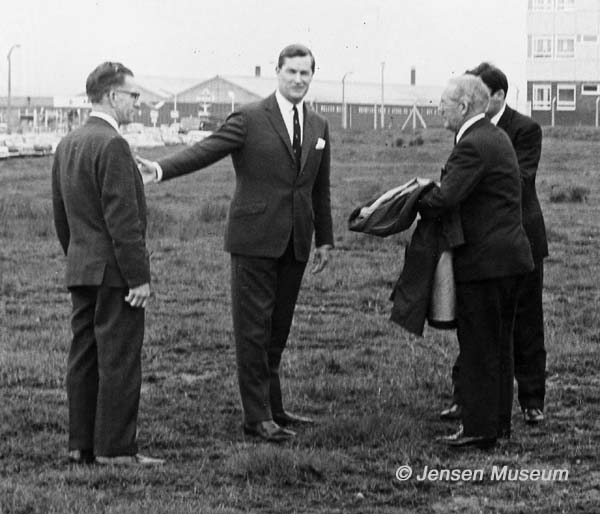 Works Manager, Bill Sylvester is introduced to David Brown by Richard Graves. The Bromford Iron & Steel works can be seen directly behind Graves.

“…the visit had created quite a commotion with the workforce. I had chaps coming up to me saying he [Brown] must be here to take over Jensen, we might all be made redundant.

Nonsense, I said, we’re making the best cars in the world, perhaps we are taking over Aston Martin. I think my words struck a cord, certainly it made some of the chaps look at Brown’s visit differently.”

After the luncheon (which probably was taken in Duerr’s offices), and a guided tour around the factory, it was time for Brown to leave. This was indeed a new era for Jensen Motors. The Company’s finances still needed to be put in order, but there was no doubting this small West Bromwich company were on the map.

REQUESTS: The Museum would be very interested to hear from anyone with further information about David Brown’s visit to Jensen Motors, or indeed, any visits to the factory where Helicopters were used.