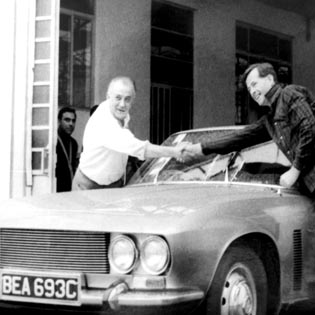 Jensen CV8 chassis number 104/2142 would be the initial chassis sent over to Italy. This would be built up to become Vignale’s first Interceptor, BEA 693C. Converting the CV8 into the first Interceptor was achieved with incredible speed, and the new car would take the world by storm. The Museum looks at the story of BEA 693C.

A job card for chassis number 2142 was put into effect from 14th January 1964.  The build had a ‘106’ prefix, showing it to be a left-hand drive automatic car, which was destined for the USA. Various modifications were indicated, including, change of wiper motors, a red high beam speedometer, medium wave radio, along with 5.75” adaptor plates for the headlamps.

The completed car left for the USA in March 1964, destined for the company, Fergus Fine Cars Inc of New York. As with two of the LHD cars which went out to Peter Monteverdi Automobiles of Switzerland, Chassis 106/2142 was returned to the UK.

It would seem likely that the car was used for display and demonstration work in New York, and later, after failing to find a buyer, it was agreed the car could be shipped back to the UK for a credit. A credit was made to Fergus Fine Cars Inc on 30th April 1965.

Meanwhile, a new job card was raised for 2142, designating the car for conversion to right-hand-drive. Suitably converted to RHD, and with a RHD prefix of ‘104’, 104/2142 had a replacement engine and transmission fitted by Engineering, along with a new speedometer (the existing one showing a mileage of 2654 miles). The completed car was registered in the UK as ‘BEA 693C’, and used as a works car. The car was driven for a while by Good Relations Chairman, Tony Good.

With a boardroom decision in late 1965, favouring a CV8 body replacement styled in Italy, designs had been sourced from Touring and Vignale. One of Touring’s designs was accepted, but with that company in no position to build cars, Vignale were asked if they would be willing to build up the new Jensens.

Vignale had already intimated that they would be willing to build the cars, and even the fact that one of their designs hadn’t been chosen, did nothing to put them off. Talks between Jensen and Vignale went smoothly and swiftly. By February 1966, CV8 104/2142 was sent out to Vignale in Turin. The CV8 body removed at Vignale.

The CV8’s glass-fibre bodywork was stripped off soon after the car’s arrival at Vignale’s factory, and by the end of May 1966 the all new steel body was completed, and left in bare-metal ready for approval.

Beattie flew out to Turin to view and approve the bear metal rolling shell. A month later, in June, Beattie, along with his Assistant Engineer, Mike Jones, were back out to Turin to undertake a four-day road test of the first working prototype ‘BEA 693C’ around the mountains of Italy and southern France, and afterwards, to drive the car back to West Bromwich.

That had been the plan. However, when the two men arrived in Turin, the prototype Interceptor was not ready, so they spent three days working at the Vignale factory, both in the offices and in the prototype build area.  They even worked into the evenings with Colin Davis, who lived in Italy, and was essentially the main liaison between Jensen and Vignale.

It was largely left to Davis to deal with any financial issues, but also helping with some engineering issues. Davis spoke fluent Italian, so he was a great help throughout the Interceptor prototype and early production stages. BEA 693C in the background, being made ready for the test drive. BEA 693C being made ready for the initial test drive. When the car was finally ready for the road, it was the morning of the last (fourth) day of Beattie and Jones planned stay in Italy.  The two men had a short outing with the car in the nearby mountains, mainly to give them some idea if the car would get them to West Bromwich. With so little time left, they were not in a position to undertake formal testing, except for some crude measurements of engine temperatures. The real testing would have to be carried out in the UK later. Vignale and Beattie give a fairwell handshake across BEA 693C. Jones captures the moment for posterity.on camera

Beattie and Jones returned to the Vignale factory early afternoon to get a few minor ‘adjustments’ made, then said their goodbyes, finally leaving late afternoon.  To complicate matters, Jones had a developed a nasty tummy bug during the day, but as the car had to be in West Bromwich two days later for a viewing by the Jensen Directors, the two men decided to drive and hope for the best. Jones was in no fit state to drive in Europe or even in some of the UK, so Beattie did all of the driving to the Le Touquet Airport, and later from Lydd to his home in Kenilworth.

Even at the point when the two men left Turin, it was obvious that Beattie was visibly tired, and with much on his mind. Jones, meanwhile, was throwing up at regular intervals during the afternoon.

That coupled with concentrated map reading for most of the way,  and throughout the night relying on not-so-good Lucas headlights took its toll.

In the back of the mind of both men was the fact they were in a valuable prototype.To write off the car due to an accident would have delayed the project many months.

On the 10th June 1966, the two weary men had arrived at Le Touquet, where the Interceptor would be loaded aboard the aircraft bound for Lydd.

By the time the two men had reached Kenilworth in the UK, Jones was fit enough to drive the car onwards to West Bromwich, arriving late afternoon.  The  following morning, the car was at Jensen Motors as planned, for the Directors to view the car. BEA 693C being driven aboard the plane from La Torquet to Lydd.

Owen, in particular, liked the new body treatment, the Jensen brothers, along with Eric Neale, made it clear they were not impressed. It was too late for the Jensen brothers and Neale to put a stop to the project, and approval to put the car into production was agreed. Michael Cooper photographed the interior of BEA 693C shortly after the car was in the UK. However, the three clocks mounted to the drivers-side of the dashboard wasn’t concidered pleasing. Cooper had to go back and re-shoot the interior after this was changed.

The prototype Interceptor, chassis number 104/2142, registration ‘BEA 693C’ was thoroughly checked over by Engineering. There were aspects of the car’s interior, which they were not happy with. A wood-rimmed steering wheel with multiple circular holes had been fitted, which was very similar to the steering wheel on E-Type Jaguars.

This was going to be the first change. A wood-rimmed steering wheel with a simple central slot running through each spoke was approved and fitted. Additionally, three clocks had been mounted to the drivers-side dash, which included the ammeter, petrol, and coolant gauges. This wasn’t aesthetically pleasing.

Vignale had fitted a face level chromed grille along with two black finished swivel vents on the upper centre fascia. Jensen Motors did away with these, and fitted the petrol and coolant gauges either side of a swivel vent to the centre fascia.  The ammeter gauge was removed.

Later on, with production cars, Jensen Motors changed the layout again, this time placing the ammeter and petrol gauges either side of the centre fascia swivel, and putting a combined oil pressure and coolant gauge in between the rev counter and speedometer.

As some of these changes were being made, the countdown for getting everything ready for the forthcoming Motor Show was looming. The car needed to be photographed ready for a new brochure. Some of the design changes were made to BEA 693C before the photographic shoot. Further changes would be made later. A Cooper photograph of BEA 693C. This image was used on the front cover of the 1966 Interceptor brochure. The first revision to the dash board layout of BEA 693C, by the time the brochure had been printed. One of the interior views of BEA 693C taken by Michael Cooper. View of the rear seating to BEA 693C. The centre armrest is in the down position.

Good Relations, Jensen Motors publicity company, were contacted, and their photographer, Michael Cooper, booked for a photographic session. One quick change had to be made to the car before Cooper took the photographs. The car’s registration number ‘BEA 693C’ was now a year old, and the brochure needed to be current.

New ‘dummy’ plates with the registration ‘GEA 196D’ (a number registered to the Company’s last manual CV8 113/2366 ) were fitted to the car for the photographic session. However, at the time of the original shoot, the three clocks on the driver’s side of the dash board had not been changed. Cooper went back again to re-shoot the interior after they had been changed to the upper centre fascia. It was interior images from the second shoot, showing the revised clock arrangement, that made it into the brochure.

With the impending launch of the new Jensen Interceptor, the Italian motoring magazine, Il Giorno Motori wanted to run an article for their October issue, and to use a full colour image on the front cover. An enquiry was made to Jensen Motors, and the magazine received one of the transparencies from the Cooper photo session. One of the Michael Cooper images of the first Interceptor used by the Italian motoring magazine, Il Giorno Motori in October 1966.

By August 1966, the second Interceptor was completed (chassis number JM/EXP/115, later re-numbered 115/2495, registration ‘HEA 1D’). By the time of the October Motor Show, Jensen Motors had two Interceptors and two Jensen FF cars at the Motor Show, one of each on the stand, and the other two being used for demonstration purposes. HEA 1D went on the stand, together with the second Jensen FF, JEA 4D, whilst BEA 693C, along with the first FF, HEA 4D were outside for demonstration use. BEA 693C photographed by Michael Cooper during testing of the car near to Kelvin Way factory.

‘BEA 693C’ was kept by Jensen Motors as an engineering test vehicle until March 1970, at which time it was sold to a Mr J.C.M.Keywood, having covered nearly 50,000 miles. According to an old Jensen Owners’ Club Register card, 104/2142 was sold by Keywood in January 1971, and some months later was crashed into a telegraph pole and written off.