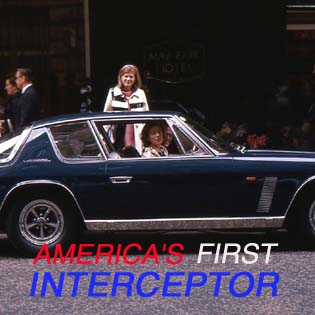 The Museum looks at America’s first Touring-styled Interceptor. Purchased by William Webb Wheeler III, the Vignale made Interceptor, chassis number 117/2544, became the first Jensen Interceptor to hit the shores of the USA. The Jensen was collected in London in April 1967. A photograph taken of the Jensen Interceptor in the centre of London just after collection, sums up the sheer glamour of the time.

In the words of Museum curator, Ulric Woodhams, “this one iconic photograph, epitomises a sence of luxury and glamour of the 1960s, which is missing in the world of today – however much money you might have. The photograph has a wonderful ‘snapshot’ feel about it. The participants frozen in time. One particularly notes the passers-by, well dressed, and with the men in suits.”

The Museum looks at the history of America’s first Interceptor. 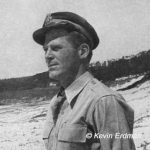 Wheeler as an officer in the United States Air Force. Photograph taken around 1945.

During World War II, William Webb Wheeler III joined the United States Air Force, where he found himself posted out to Morocco as a radio / operator. After leaving the airforce in 1945, Wheeler became a stock broker, working with Shearson, Hammill & Co in Santa Barbara.

Wheeler had taken a liking to the Jensen 541, which was being manufactured by the small English motor company, Jensen Motors. In 1958 he ordered a Jensen 541R. The car was specified with a blue painted body, grey roof along with blue grey leather trim. 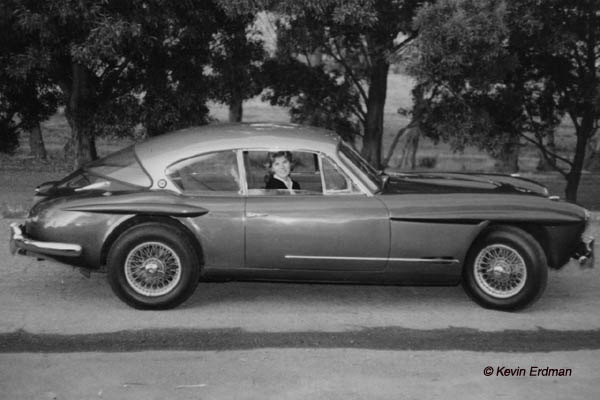 The Jensen 541 R photographed shortly after importation to California. William Wheeler’s daughter, Cinda, in the passenger seat. She later married Donnelly Erdman, and they had a son, Kevin Erdman.

The 541R was kept by Wheeler until 1966, and then, after seeing the new Touring designed Jensen Interceptor in 1966,  decided it was time to change. Wheeler had taken an immediate liking to the striking design, and placed an order with Jensen Motors. 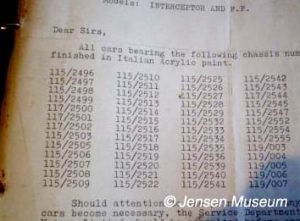 A list of chassis numbers of cars painted in Italy. 115/2544 is amongst them.

Chassis, 117/2544, was assigned to Wheeler, the ‘117’ schedule being for left-hand-drive. There is no doubt that Jensen Motors classed Wheeler as an important customer.

So, the car was built up at Vignale as a right-hand-drive car, and once finished was shipped to Jensen Motors, where it was changed to left-hand-drive.

Specification for 117/2544 was Stratosphere blue with grey leather. Chassis file documentation leads us to believe that 117/2544 came from Vignale to Jensen Motors painted but untrimmed, with Jensen Motors trimming the car at West Bromwich.

The completed car was moved to sales in April 1967, and delivered to London (later Heathrow) Airport, ready for collection by the Wheelers. 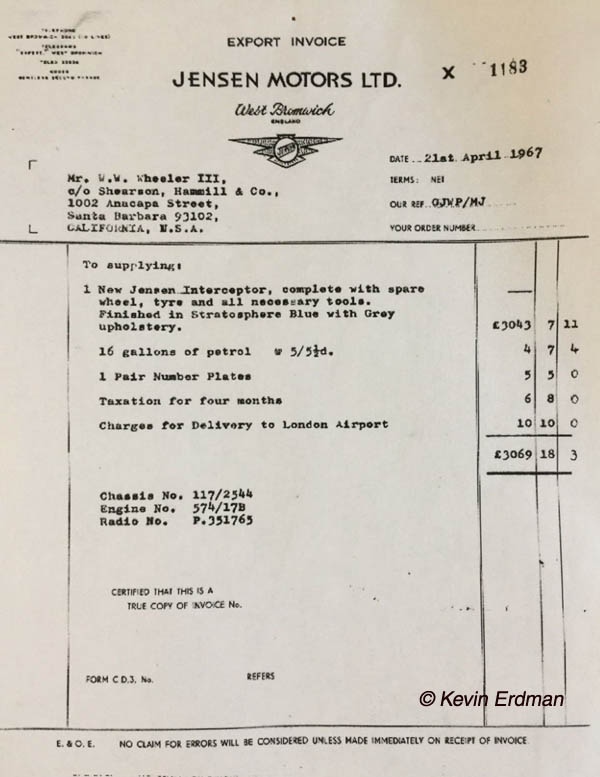 The invoice for Wheeler’s Jensen Interceptor chassis 117/2544. The invoice dated 21st April 1967, and specified with delivery to London (Heathrow) Airport.

The family had decided in advance to visit England. William Wheeler’s son was going to be married, and the family wanted the wedding to take place in England. This was an excellent opportunity to pick up the new Jensen Interceptor at the same time, and use it while they were in the UK. Their Interceptor was assigned the British registration number, ‘JOV 403E’. 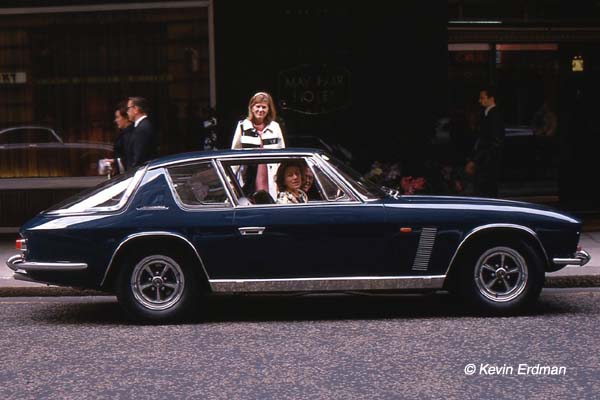 William Wheeler’s wife, Esther Wheeler, is in the passenger seat looking towards the camera. Her husband William is behind the wheel. William & Esther’s daughter, Cinda, can be seen standing on the pavement by the car. The photograph was taken in front of the Mayfair Hotel, in the centre of London, during April 1967. 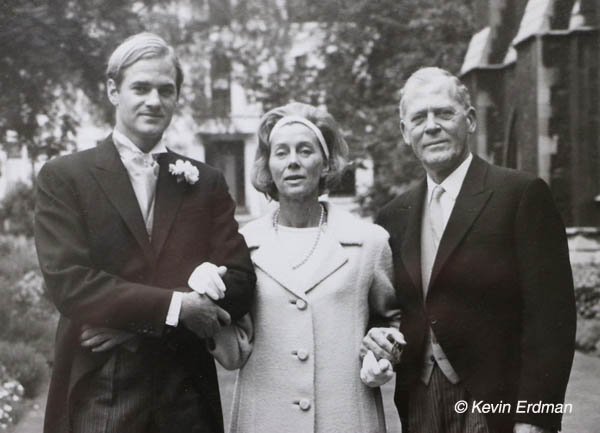 The family used the car from April, through until September, and then had the Interceptor shipped over to California. Once in California, Wheeler used the Interceptor daily for work, and also to take him to his favourite golf course, at the Valley Club in Montecito. 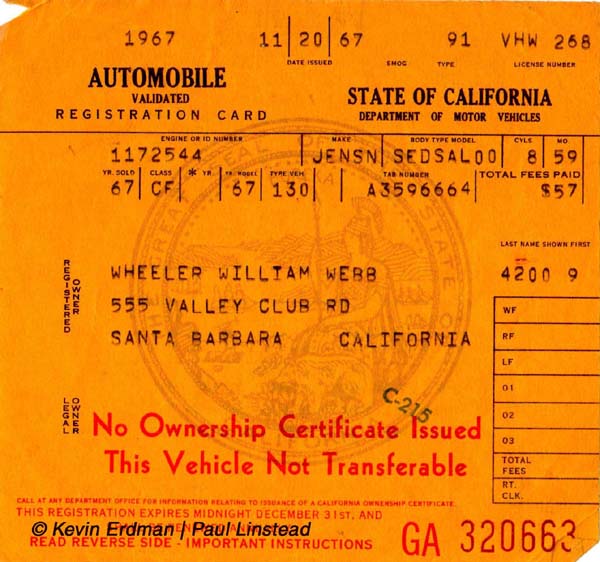 The State of California Registration Card from first importation in 1967. The Jensen was allocated the Californian licence number, ‘VHW 268’.

With the Interceptor in California, the Jensen 541R was disposed of in the USA. The 541R remained in the USA for many years, later being exported to Australia. This rare left-hand-drive 541R survives in Australia to this day.

William Wheeler III died in 1979, and the Jensen was passed to his son, William Wheeler IV. He was living in San Francisco, and used the Jensen at weekends. During weekends away, the family explored the wine regions, and fell in love with the idea of buying a winery. In 1982, Wheeler purchased a winery in Healdsburg, California, calling it the Wheeler Winery. The winery produced Cabernet Sauvignon and Zinfandel from their hillside vineyards in Dry Creek Valley.

In addition, Chardonnay, Sauvignon Blanc and Merlot, were produced from grapes grown by local growers. The Wheeler Winery quickly gained a reputation for good quality wines.

Aside from running the winery, Wheeler was also involved in real estate development in Sonoma County.  He helped develop downtown Healdsburg, where the winery sales was located. The family house and vineyards being just 15 minutes away in the hills of the area near Healdsburg. Wheeler would often use the Jensen for the short run into town.

By the end of the 1990s,  the Jensen Interceptor wasn’t being used, and was left sitting outside in the Californian sun.

This led to Wheeler giving the Jensen to his nephew, Kevin Erdman, in 2005. Once in Erdman’s ownership, the car was repainted, and various work undertaken to bring the car back to life. In particular the headlining and carpets were in Erdman’s opinion, past their best. Replacement of the headlining and carpets, along with other work took place shortly after he became the custodian of the car. With work completed, Erdman used the Jensen sparingly through to 2017. 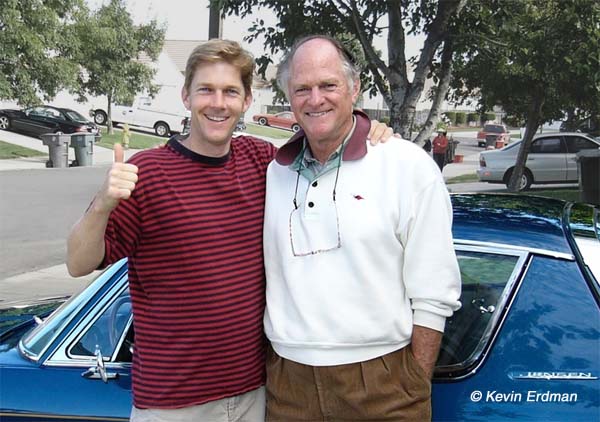 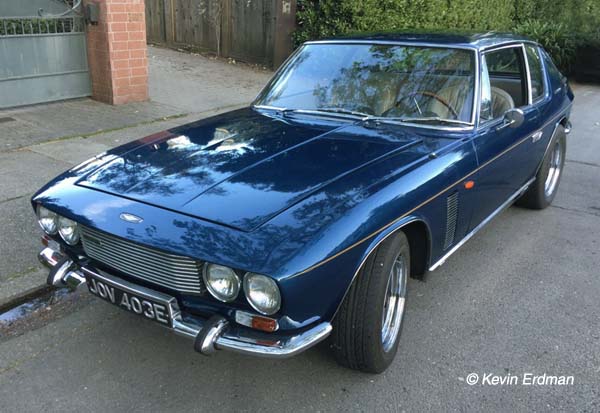 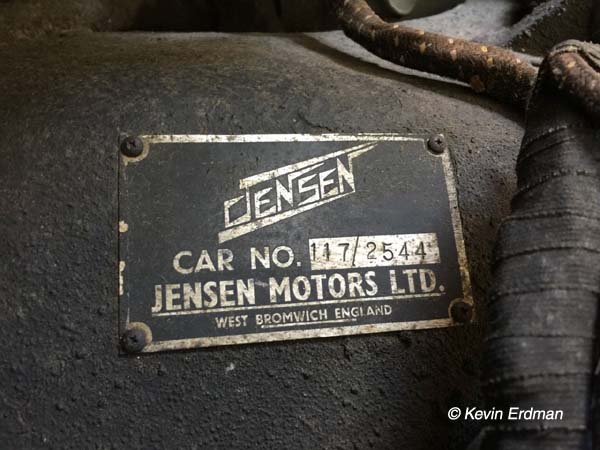 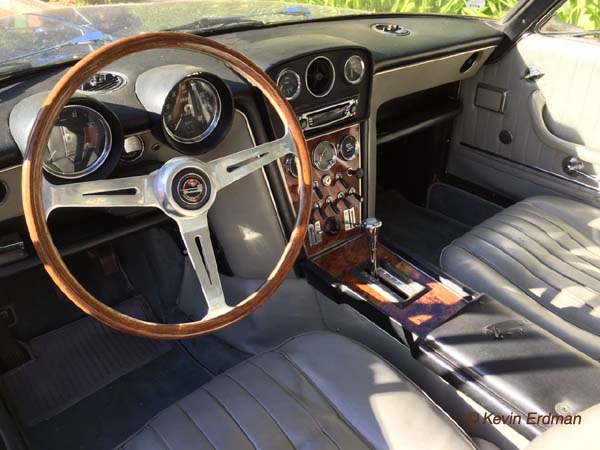 An interior view across from the driver’s side. It is believed the car was trimmed at Jensen Motors. Photograph taken in 2017. 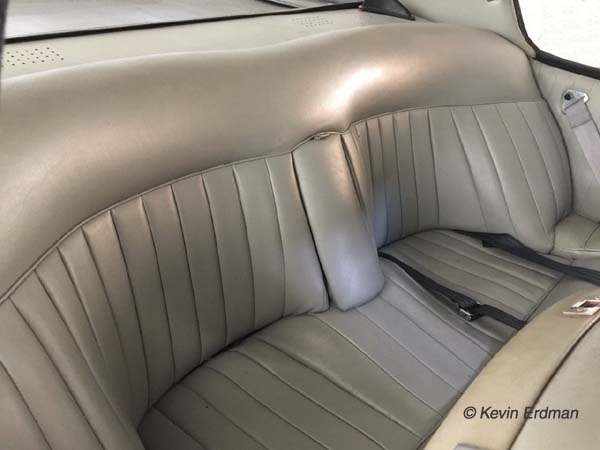 Rear seats of 117/2544. One of the black air demist funnels can be seen on the rear speaker shelf. These were later discontinued by Jensen Motors in favour of electric demist lines direct to the rear glass.

With 117/2544 hitting the big ’50’ years of being in the same family ownership, Erdman believed this was the right time to concider passing the car on to a suitable custodian.

Erdman was lucky. Paul Linstead also living in the USA, had previously acquired two Jensen FFs. Hearing about the Vignale left-hand-drive Interceptor, he was immediately interested. Initial contact with Erdman quickly led to Linstead purchasing 117/2544 from him.

As a sympathetic custodian of 117/2544, Linstead has acknowledged the need to look at this car in terms of conservation rather than restoration. At the same time, various work which was undertaken to 117/2544 in the early 2000s has to be re-evaluated.

Chassis | Body: The body and chassis survives in excellent overall condition, generally free from rust. Linstead has noted the car’s chassis number stamped to the front crossmember has a 115 schedule, even although both the engine-bay chassis plate, and cubby holes plates show a 117 schedule. This confirms that 117/2544 went out to Vignale as a right-hand-drive chassis, which was later changed to fulfill wheeler’s order. 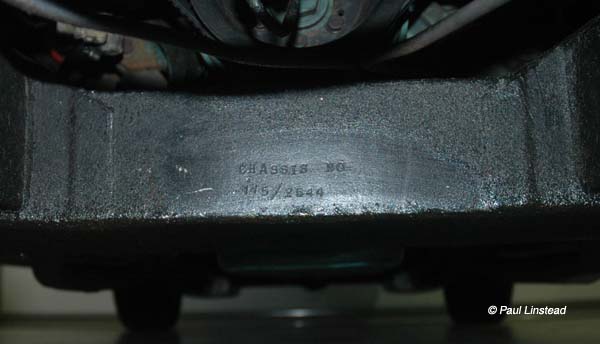 The car was resprayed in the early 2000s, and unfortunately the colour was a different mix to the original Stratosphere blue. The car will need to be resprayed back to the original Stratosphere blue. At the same time the car was resprayed, various Vignale type rubbers, such as those around the tailgate, were changed for new rubbers of a Jensen Motors (West Bromwich) style. Linstead intends to re-instate the Vignale style rubbers as and when he, or the Museum has them remade. The Rostyle wheels have previously been modified (2000s), and are now wider than originally fitted. Linstead intends to either re-work the existing wheels, or find another set, which conform to original specification. 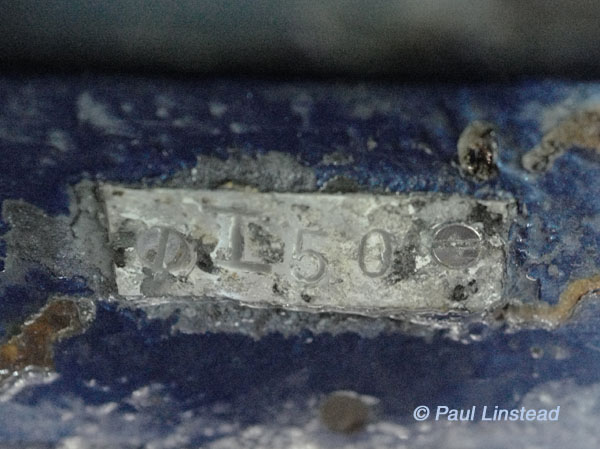 The small aluminium plaquette fitted by Vignale into the front bonnet gutter. The plaquette bears the designation ‘I 50’. The ‘I’ for Interceptor, and the number ’50’ showing this was the 50th car built up by them.

During various disassembling, the Vignale build number has been confirmed as ’50’.

Mechanical: The car has been maintained well mechanically. The car drives correctly, and doesn’t overheat. Mechanical work required is simply to change certain components back to the type fitted to the car in 1967.

Interior: The car with original leather. The headlining had been changed in the early 2000s, along with the carpets. Most other aspects of the interior remain original. Linstead’s view is to conserve the original leather. A modern radio fitted by Kevin Erdman has been removed, and a correct factory specification Radiomobile 982 (US Spec) fitted. 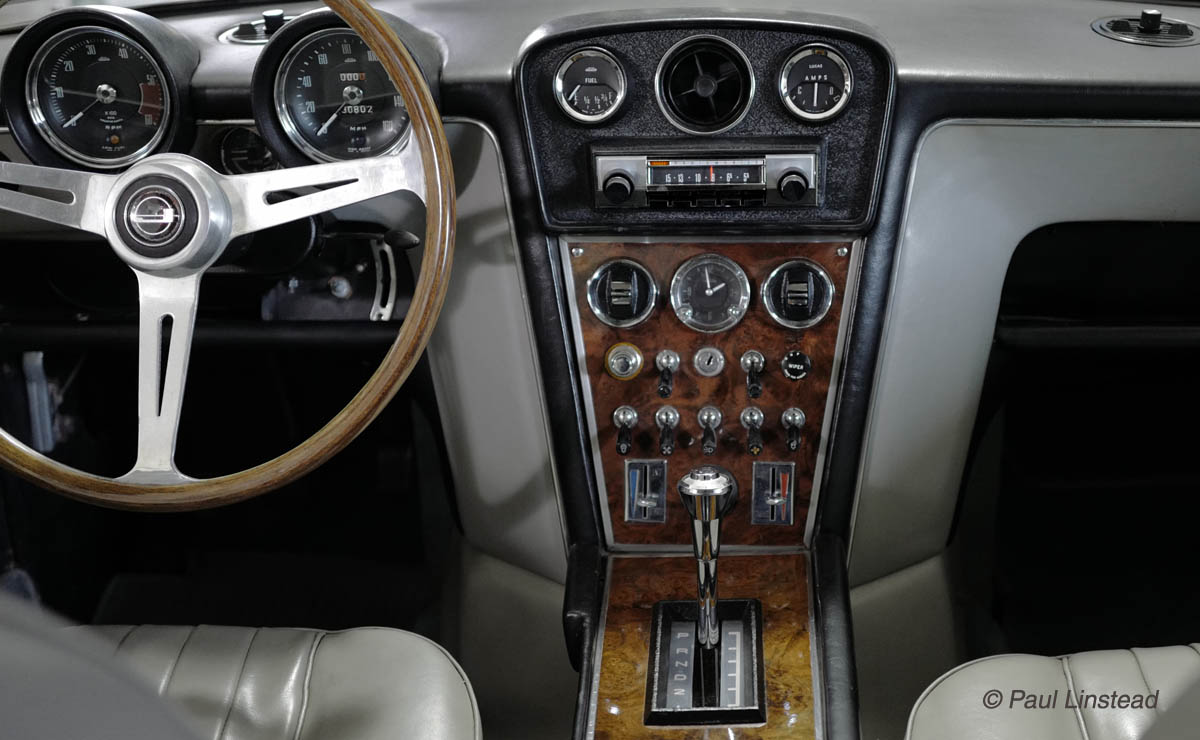