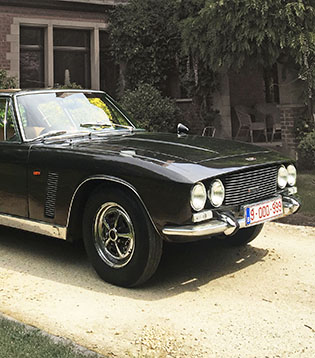 In early 2020, the Museum was contacted by Jean-Louis Van Marcke, he had inherited his father’s Sincar Interceptor. A car that his father had stored away from 1973, until awoken from its slumbers in 2010. This is the story of the Vignale-built Sincar Interceptor, chassis number 117/2605.

Sincar Jensen Interceptor  with Jensen Motors chassis 117-2605, and the Vignale assembly number ‘22’, was manufactured in approximately May 1967.

The car was finished in charcoal grey with a tan leather interior. One of just over 32 cars built as a part of the Sincar Interceptor program. It is believed the car was finally completed in late 1967.

On completion, 117-2605 was transported from Vignale across to Belgium, where it arrived at the beginning of 1968 at the Belgium Jensen importers, Beherman Demoen, Rue Vanderstraeten 11, 1080 Brussels.

Beherman started importing and distributing Jensen in Belgium in 1968 and sold in total 20 MK.I Interceptors. Belgium was the third largest market for Jensen at that time, after the UK and Ireland.

On 17th September 1968 the car’s battery had to be changed at the Beherman garage, indicating that the car had been immobilized for a long period, probably one year.

Beherman sold the car to its first owner on the 19th September 1968. The new owner was Michel Bede, a well known international patent lawyer. Bede specialised in patents and intellectual property. The Interceptor was registered on 19th September 1968, and assigned the Belgian licence plate ‘D 4477’.

Bede’s company had been established back in 1876 in Verviers by Michel’s grandfather Emile Bede. The company registered the first patent for uphill track system for electric trams at the end of the 19th century. The company, Cabinet Bede, was later run by Emile’s son, Jacques, who passed away in 1972. 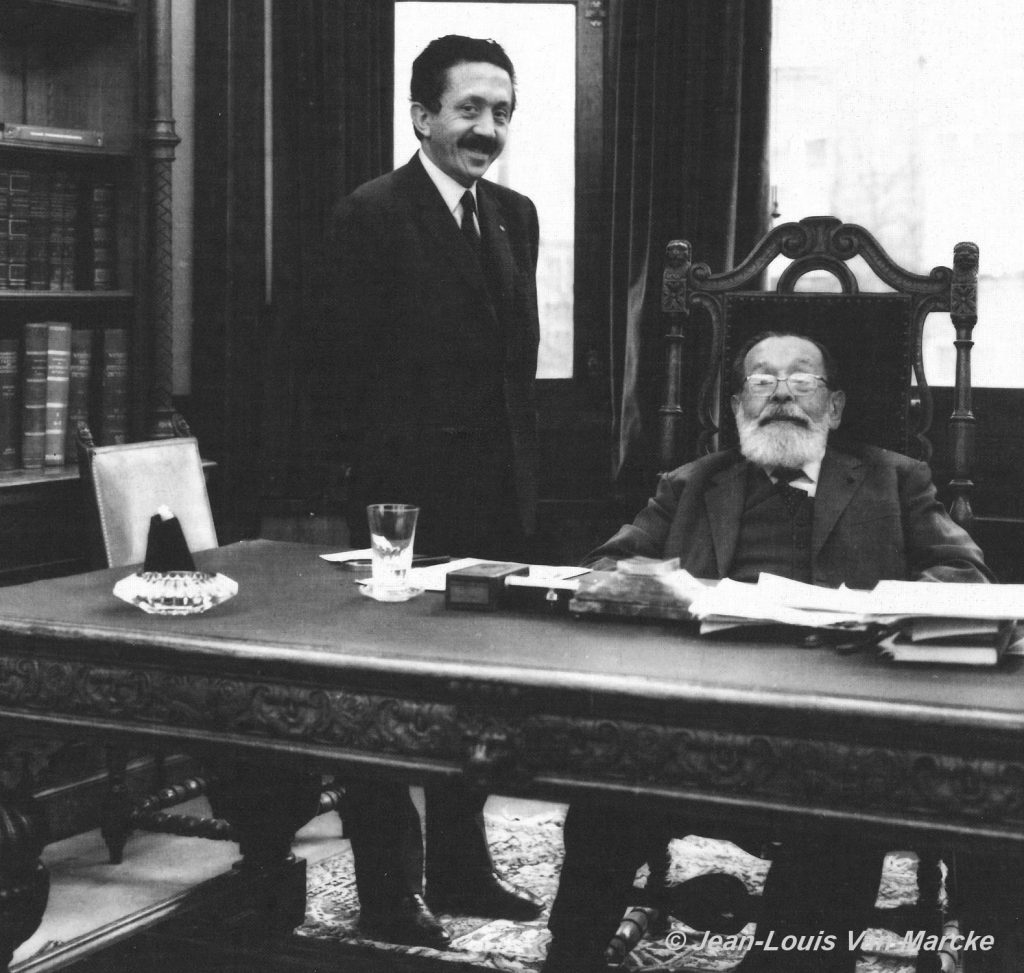 Michel Bede (standing), with his father, Jacques (sitting). The photograph was taken in the late 1960s, during the period Michel Bede owned the Interceptor.

Jacque Bede’s son, Michel, represented the third generation of the family business. Bede was a short and not so handsome gentleman, but he had much in his favour: intelligence, engaging charm, humour and wealth. Unfortunately he suffered from ill health. He had severe back / spinal cord illness that had afflicted him for a long time.

Bede was living in Ixelles, Brussels with his wife, Patsi. He used the Interceptor for a relatively short period between late 1968 and 1970. Bede’s general health deteriorated leaving him unable to walk and confined to a wheelchair.

Jean Van Marcke purchased 117/2605 in September 1970. Van Marcke was the owner of Etn. R. Van Marcke, a leading Belgian sanitary & heating distributor. His father had founded the business in 1929. The Jensen was bought by Jean Van Marcke to replace his 1968 Porsche 911T. 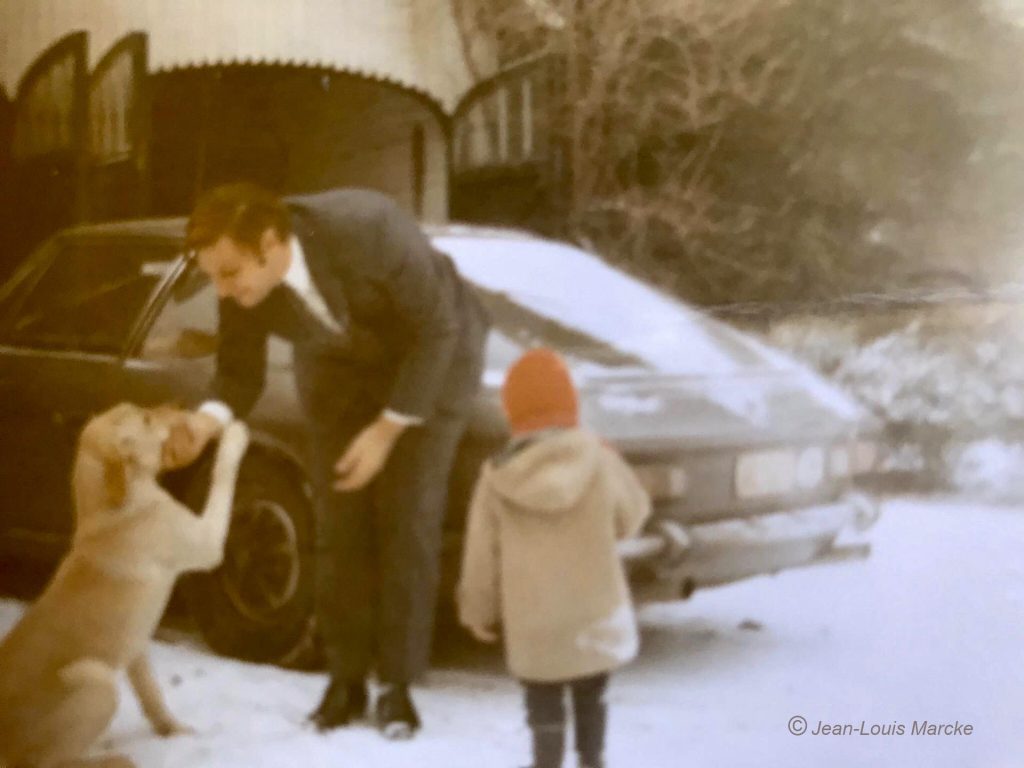 Jean Van Marcke photographed in winter 1972. Van Marcke’s son, Jean-Louis, stands with his back to the camera. Sincar Interceptor 117/2605 in the background. 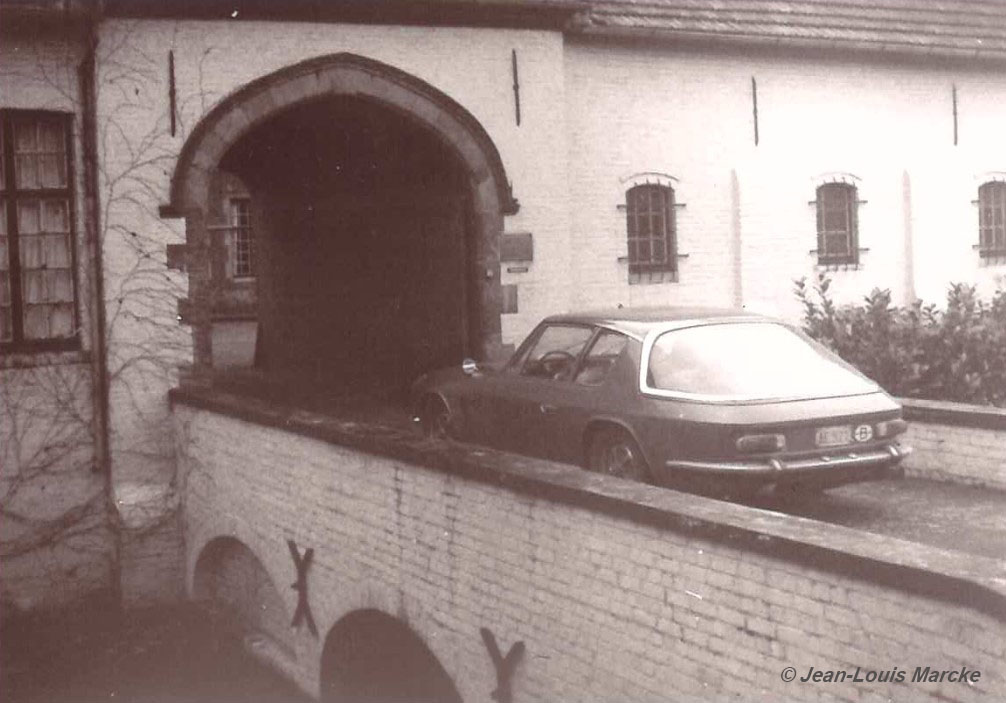 117/2605 at the entrance to the Kasteel Hontzocht in Beernem. The home of Jean van Marcke’s wife’s family, the Seynaeves. Photograph taken 28th December 1971 for a Christmas reunion party. 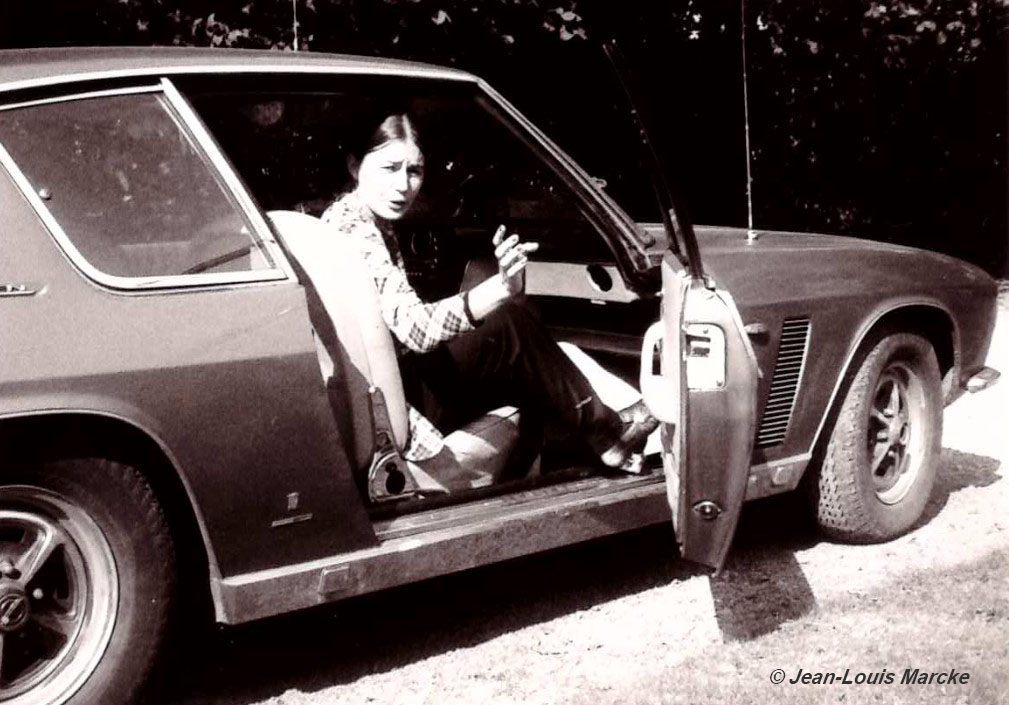 Rita Van Marcke (nee Seynaeve), in the passenger seat of 117/2605. Note the Vignale badge at the base of the rear quarter. Photograph taken 2nd November 1972. 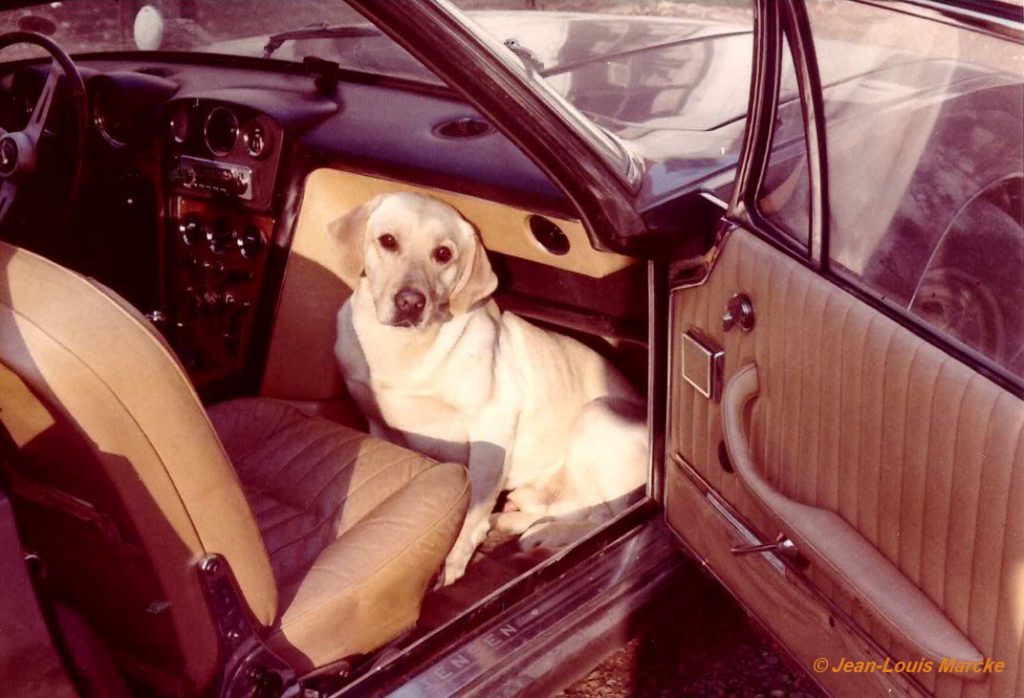 Jean Van Marcke used the car for about three years, by which time, it had covered around 70,000 miles. By the end of 1973, Van Marcke placed the car in storage at his company headquarters.

Fascinatingly, Jean Van Marcke was, in the first half of the seventies, the simultaneous owner of two of just twenty MK I Interceptors sold in Belgium. He was a car lover and typically only kept his cars for about two to three years before changing.

In 1973 Van Marcke bought his second Jensen Interceptor from a friend. The second Jensen was, as his first, a MK.I version (chassis number 117/3137), finished in silver with black leather trim. 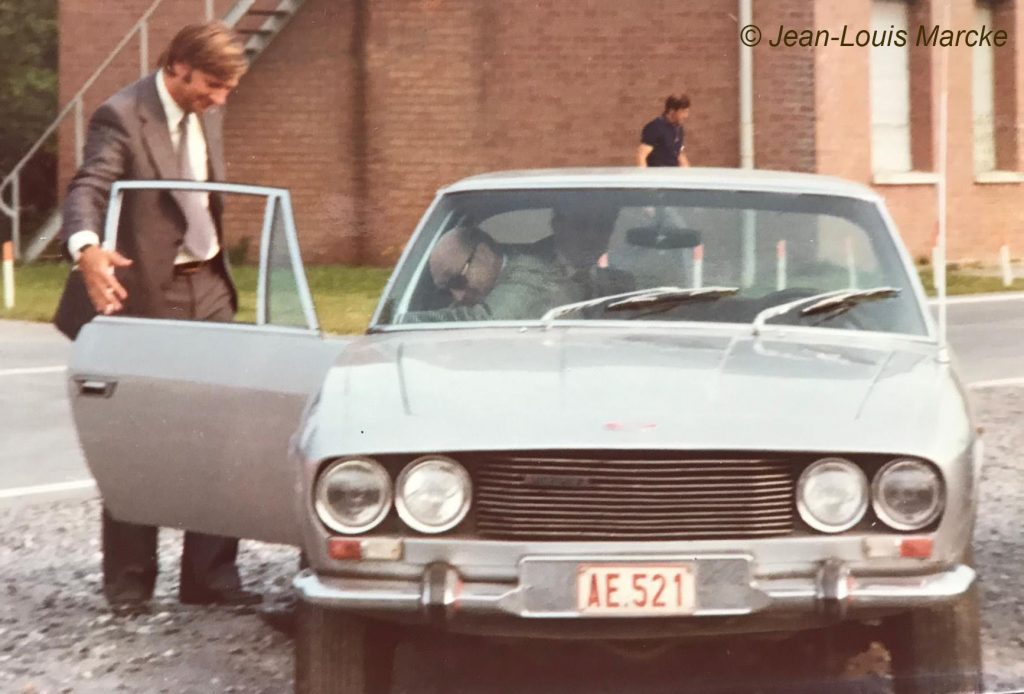 Van Marcke opens the passenger door of 117/3137 to let his business colleagues out. The photograph taken during 1973/74. 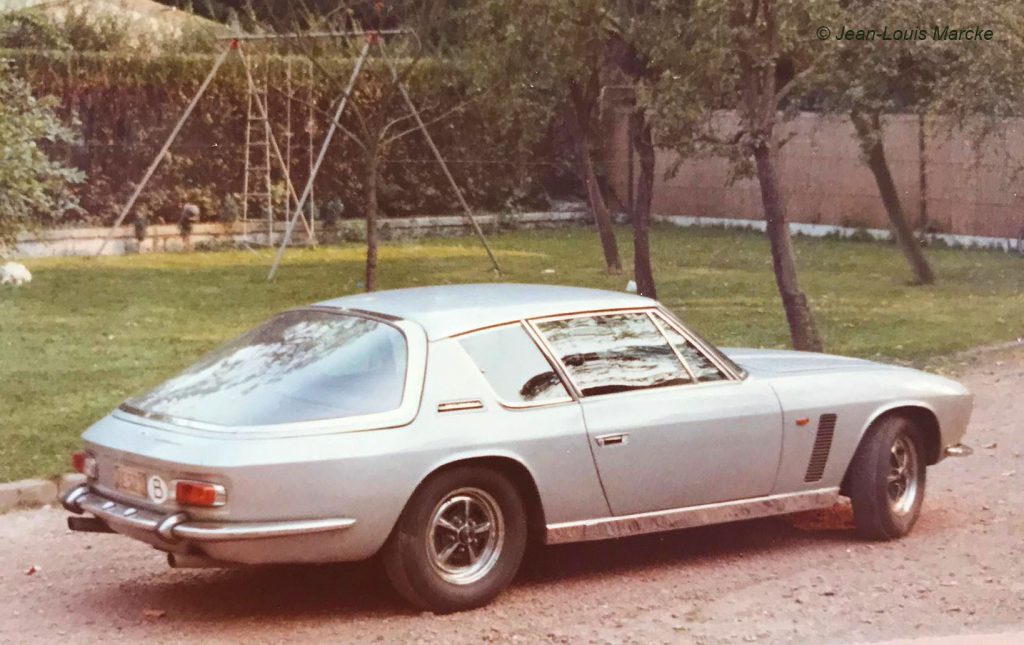 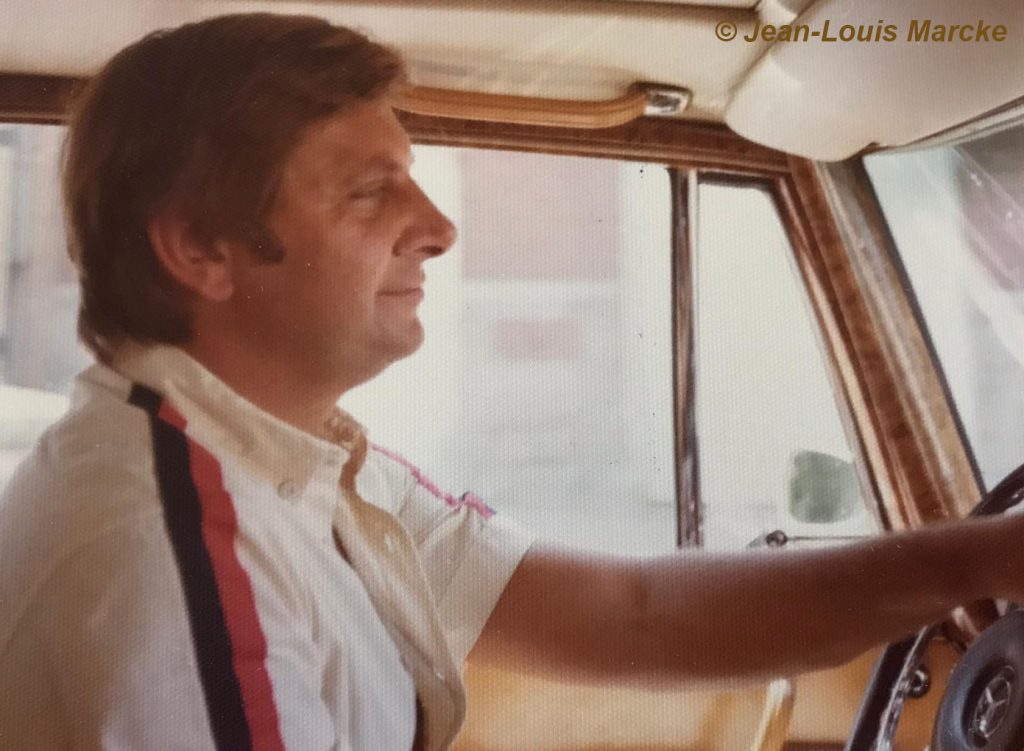 Van Marcke at the wheel of his new Mercedes 600.

Meanwhile Van Marcke’s first remained in his ownership, but in storage. The stored Jensen became the first car of his ‘car collection’. Other cars followed the Jensen into storage, rather than being sold on.

117/2605 was stored first in the company’s distribution warehouse in Dam, Kortrijk, later in the eighties, in the new headquarters (Weggevoerdenlaan 5, 8500 Kortrijk) and distribution warehouse and finally, in the nineties, in a subsidiary in Bruges (Krakelweg 45, 8000 Brugge). By this time sharing space with various other vehicles, including the Mercedes-Benz 600, a Lamborghini Espada, Porsche 928, Aston Martin Lagonda – to name but a few. 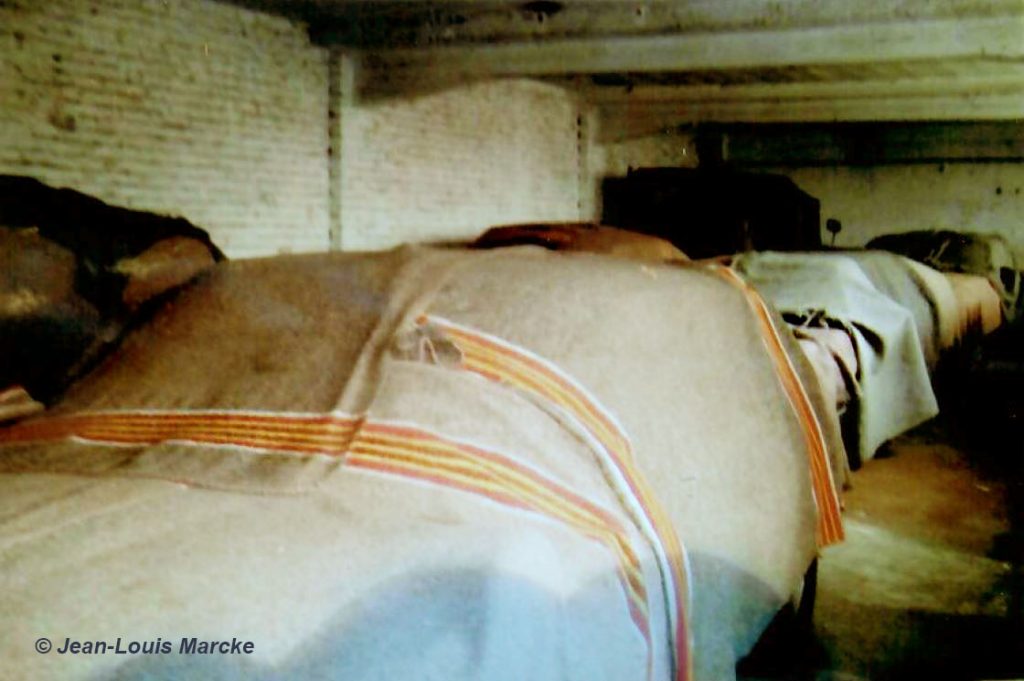 The ‘collection’, including 117/2605, remained in storage for 37 years. In the summer 2010, Jean Van Marcke sold most of his vintage cars, but kept his old favourite, the Jensen. 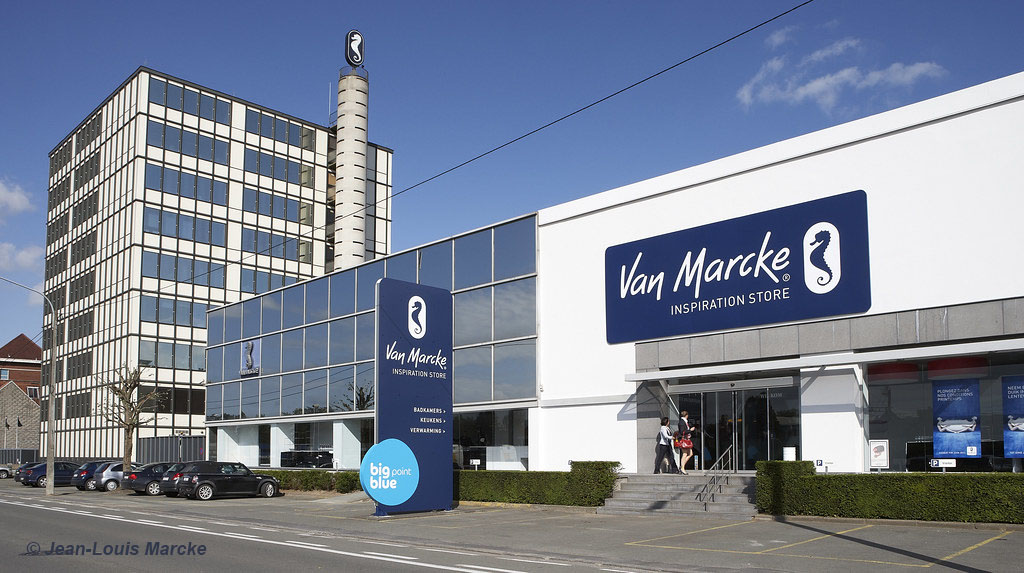 The Van Marcke headquarters until 2018. The Company moved to new offices after that time.

Van Marcke had the car recommissioned by an classic car specialist in Knokke. With the car back, he gave the car to his son, Jean-Louis Van Marcke, thus keeping the car in the Van Marcke family since 1970. 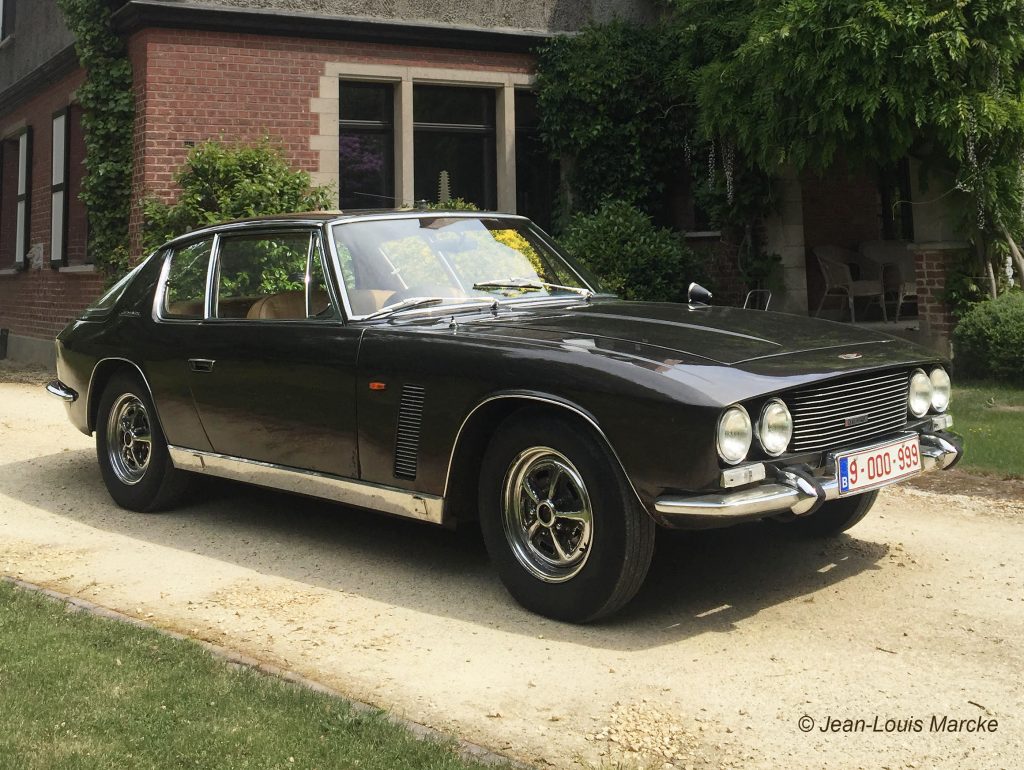 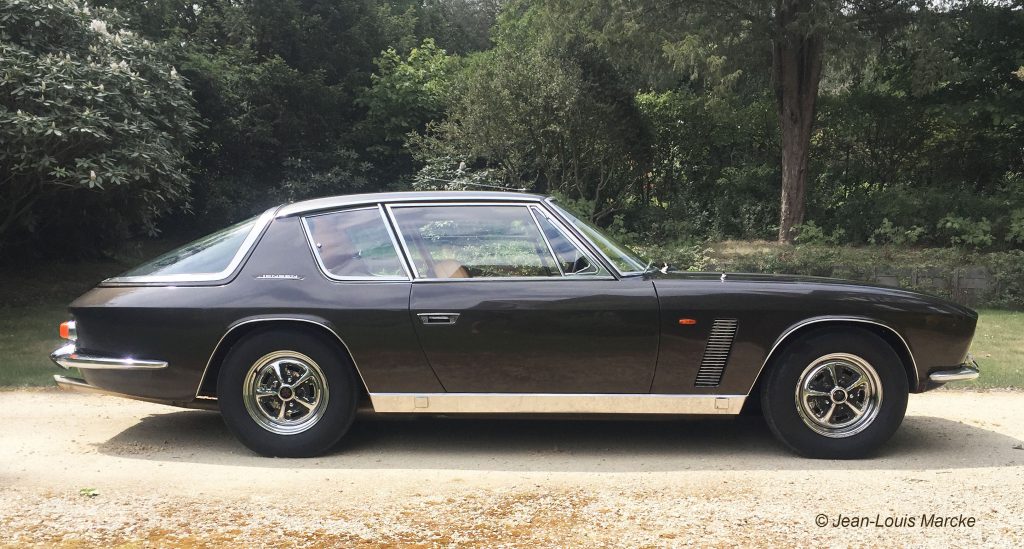 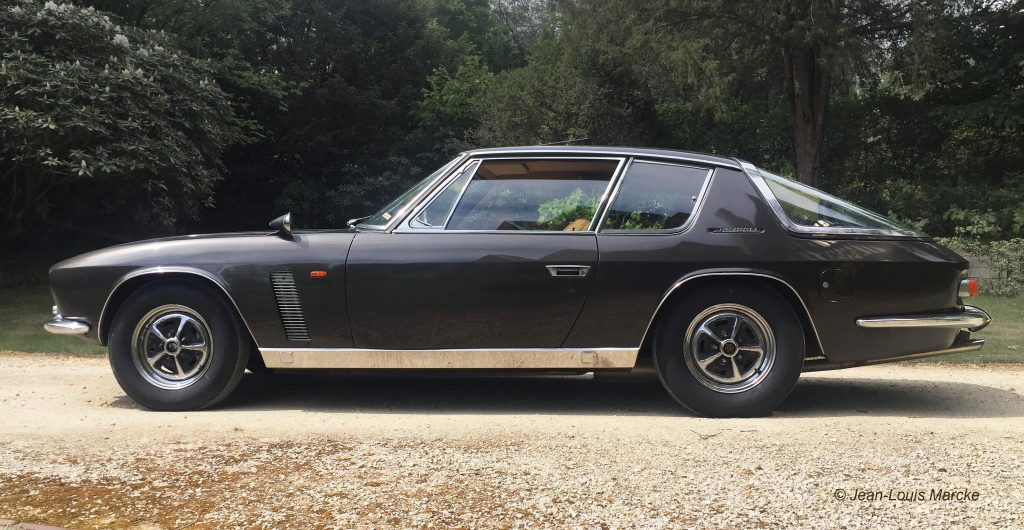 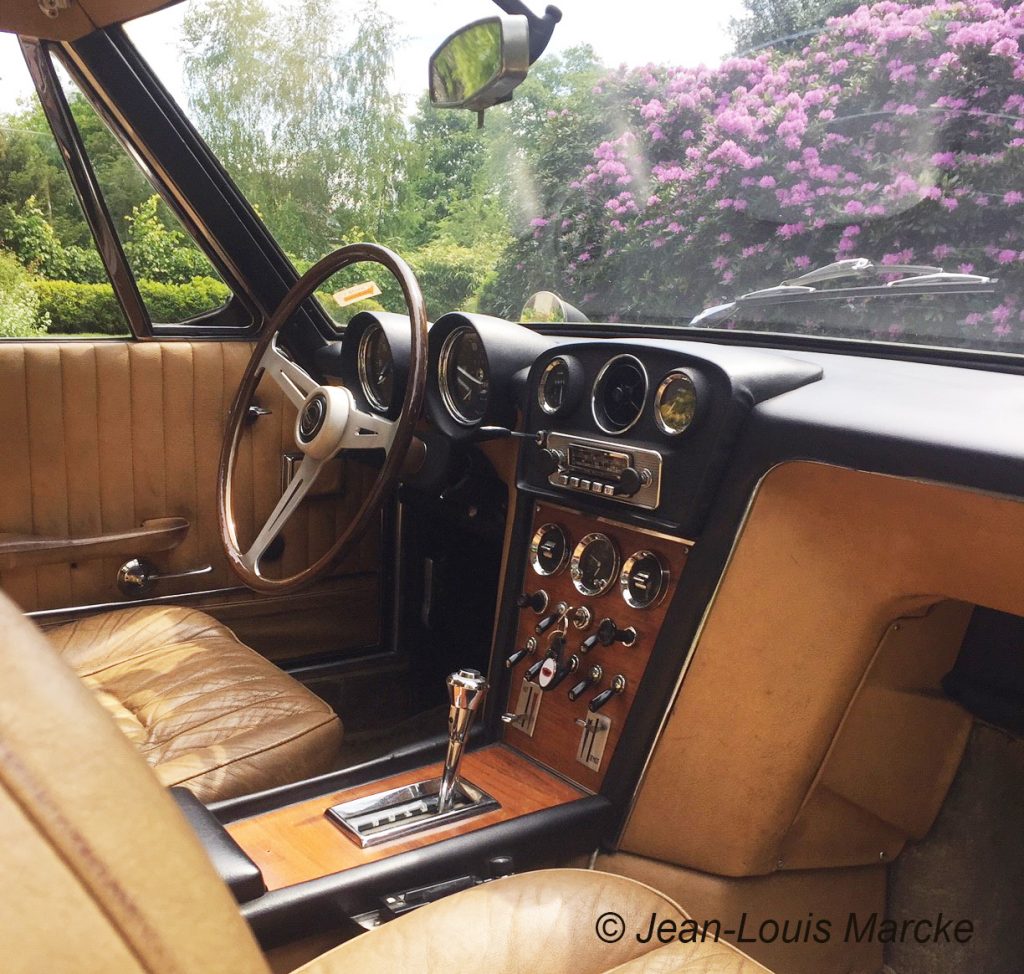 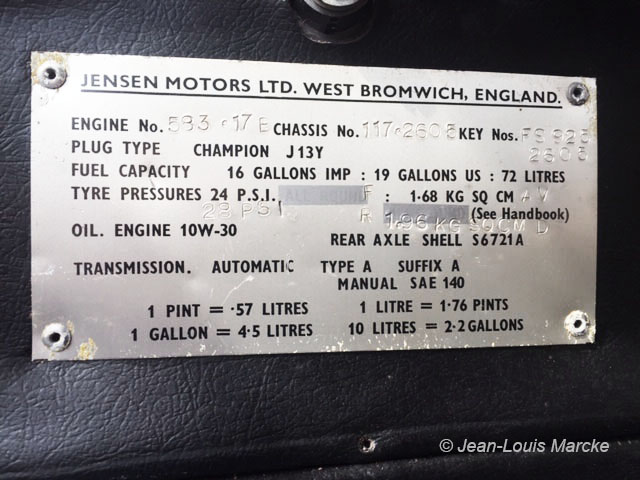 The data plate which is affixed to the inside roof of the interior centre cubby. 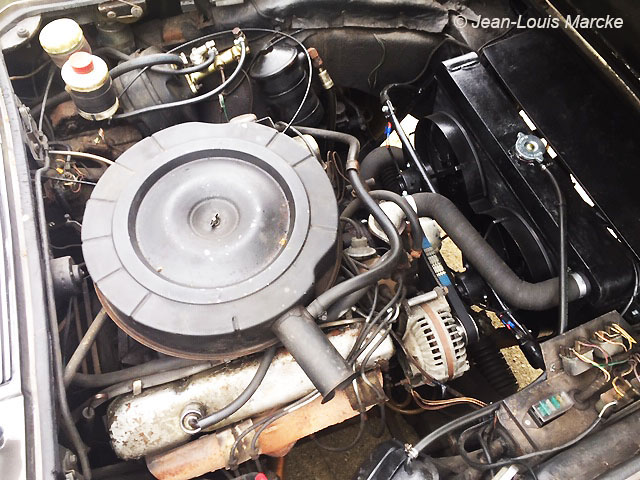 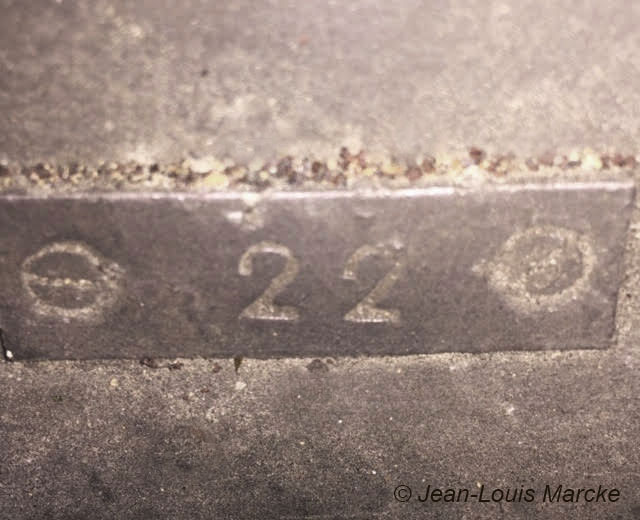 The Vignale plaquette numbered ’22’ remains untouched to the centre of the front panel.

On 10th March 2011 the car re-passed the technical control (MOT), still under its original license plate ‘AE-521’ and with 70.283 miles on the odometer. By the 21st of that same month, the car was re-registered with new Belgian license plate ‘9-OOO-999’ by Jean-Louis Van Marcke.

The car remains particularly original. The car is still presented with its original body colour of charcoal grey, and the interior tan leather trim is as fitted by Vignale in 1967. Today, the trim has that beautiful patina that only time can give. Over the years several repairs and improvements have been executed to enhance the reliability, security and performance of the car. The body has not been repaired so far.