Jensen FF outside The Dorchester for the launch of Solo.

Here we had a car which, James Rusbridger, a real life James Bond character, who worked for British intelligence (famous for his mysterious death), bought new in 1968.

But lets get down to the nitty-gritty, a car back in 1968 with constant four-wheel-drive, let alone anti-lock braking, was easily going to out perform any car that Bond’s villians were going to pursue him in; especially if it was raining.

Then it happened. On the 25th September 2013, a new James Bond novel, Solo, by author William Boyd was launched at the Dorchester in London. In Solo, our suave spy drives a Jensen FF, having loan of the car from a Mayfair-based Jensen distributorship (obviously meant to be Charles Follett). The book is set in 1969, a year in which the four-wheel-drive Jensen FF was at its pinnacle, and order books for the revolutionary car were full.

Outside of this momentary excitement, the book settles down with the glamorous Bond indulging in beautiful women, weaponry, clothes, along with ample doses of sophisticated food and drink. Enter a Taittinger rosé 1960, and a Château Batailley 1959. 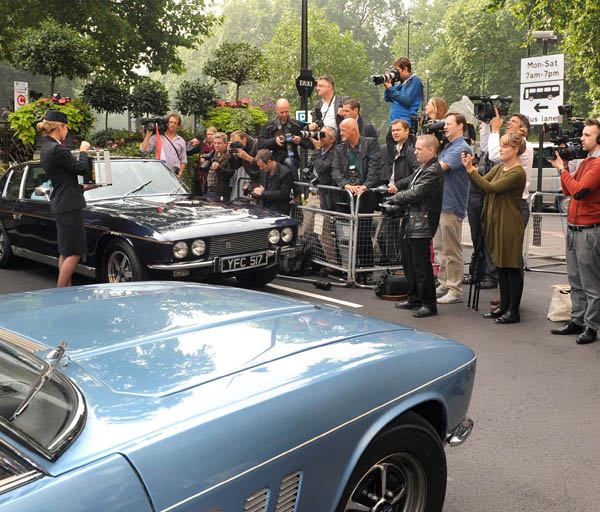 Paparazzi outside The Dorchester for the launch of Solo.

The launch of the book was a typically orchestrated affair, with a Jensen FF brought in on loan for the day, and suitably parked directly outside the front of the Dorchester. There, Boyd; clutching a Bondesque transparent attaché case, with a copy of Solo inside; stood next to the Jensen FF, whilst surrounded by paparazzi  and TV cameras. In the background a group of seven young models, clad in 1960s-style air-hostess uniforms, awaited with more transparent attaché cases, each holding a signed copy of the novel. When the signal was given, they jumped into a waiting selection of Jensen cars, to be driven at high speed (within legal reason) to the airport. Once at the airport, they were flown by British Airways to Amsterdam, Delhi, Cape Town, Edinburgh, Los Angeles and Sydney, where the books were handed over to various heads of publishing houses.

Solo received mixed reviews, with a number of critics pointing to the convoluted and strained plot. Typically, other critics saw the book as being equal with, or superior to, Fleming’s novels. The book sold well, appearing in the top ten-selling book lists in the UK.

ADDITIONAL INFORMATION: If you have any additional information relating to this article, please contact us at archive@jensenmuseum.org or telephone +1694-781354.