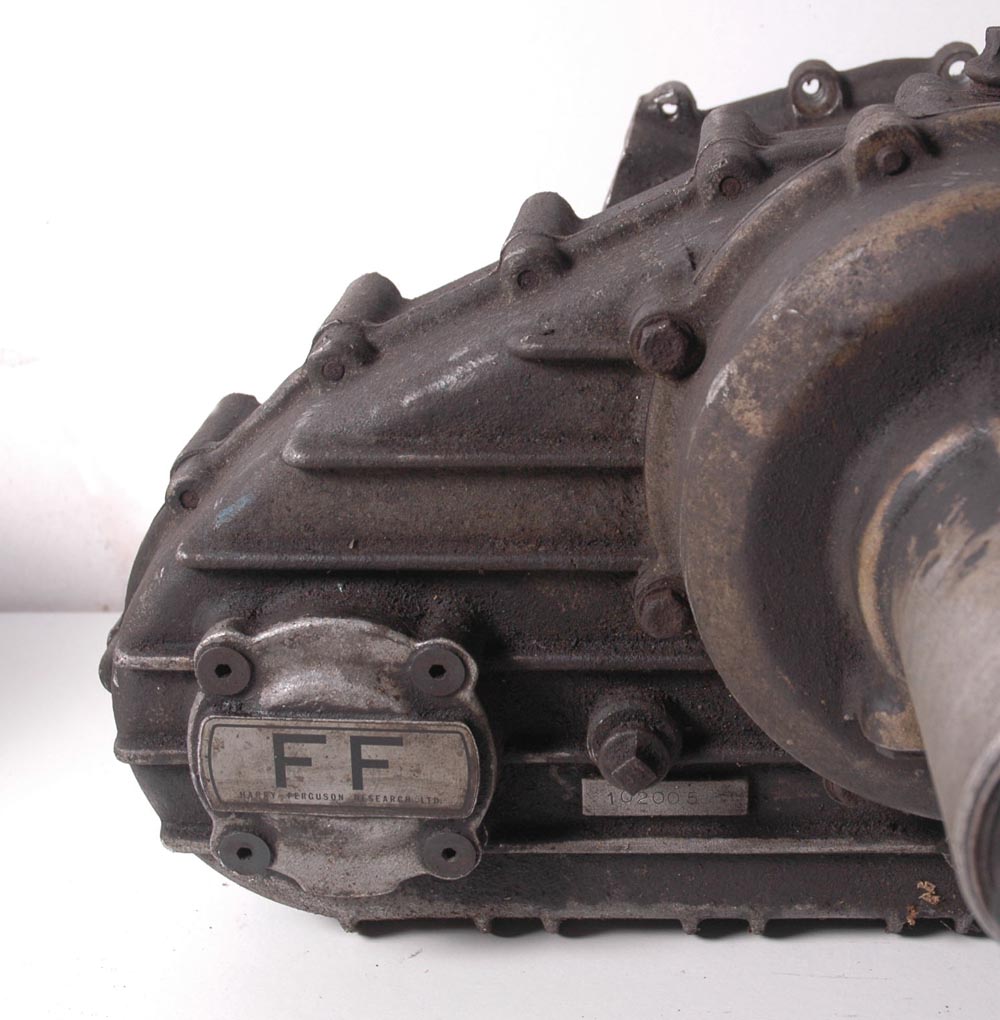 At the heart of the Jensen FF is the Ferguson four-wheel-drive-system, cutting edge technology when the car was launched in 1965. The system had been the dream of two men, Tony Rolt and Freddie Dixon, way back before the Second World War, with Ferguson coming aboard in the 1950s to finance the venture. The Ferguson Formula (as it was called), was a clever, but simple system, rugged and agricultural by the standards of today. Not that this was any bad thing, the system turned out to be pretty bullet proof, and the fact that the vast majority of units are working trouble free to this day, is testimony to a grand design. How did the system work. 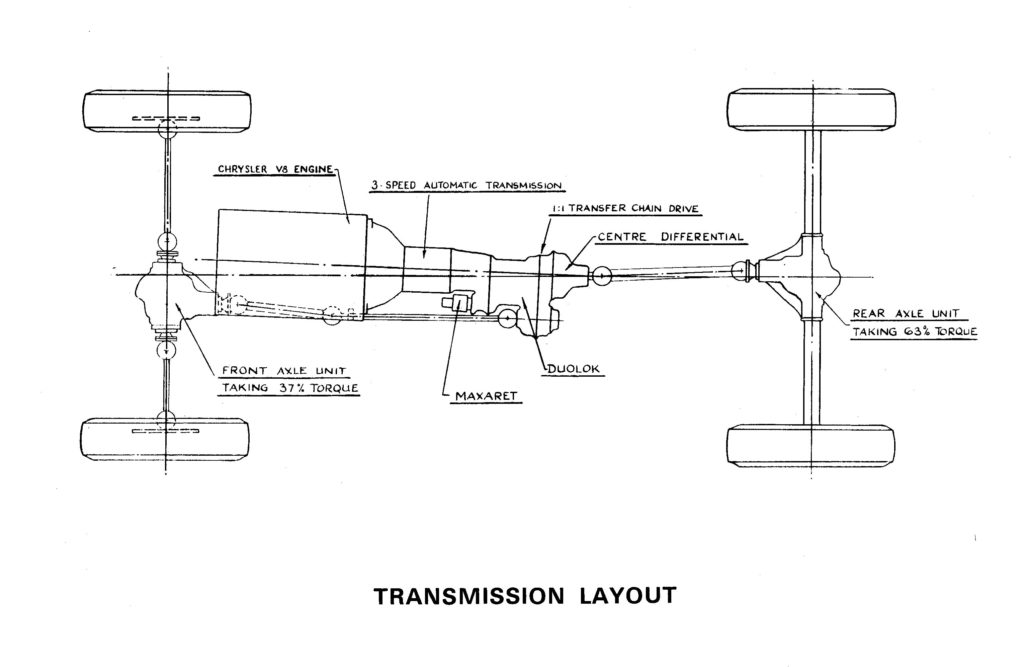 The basis of the Ferguson four-wheel-drive  all-wheel control formula, is a master differential, along with two one-way clutches. In this particular design the master differential is a planetary gear permiting a speed variation between front and rear output, and also dividing the torque unequally in the ratio of 37% to the front road wheels and 63% to the rear.

Drive is taken to the master differential by mounting the planet carrier onto the output shaft of the gearbox, in this case the Chrysler ‘Torqueflite’ automatic. Three planet gears are in mesh with an annulus and a sun gear. Chain sprockets on the sun gear shaft drive the front output shaft through a set of three Morse ‘Hyvo’ chains. Rear output shaft and annulus gear, are formed as an integral member. 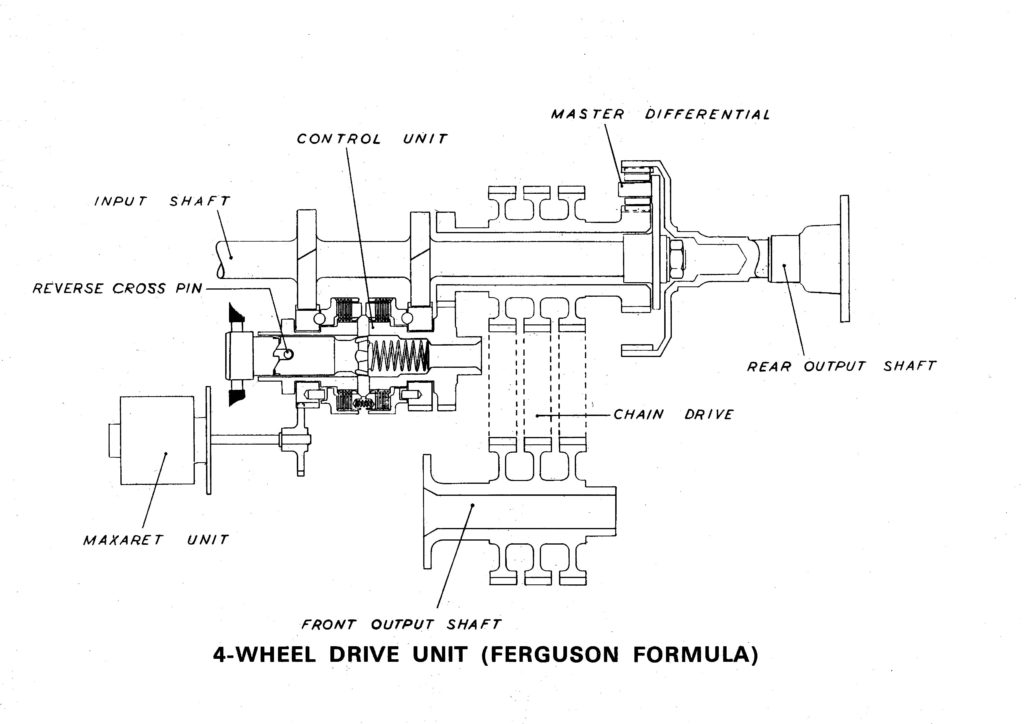 Also mounted on the sun gear shaft is a gear that drives the main shaft of the control unit. This unit consists of two one-way clutches that are controlled by two gears driven from the input shaft (gearbox ouput). Each clutch has a multiplicity of plates, the inner ones being splined to the main shaft and the outer plates held in an outer casing. An abutment ring with a chamfered end face bears against the chamfered ends of six radial plungers. An inner sleeve prevents the plungers from being pressed inwards as the result of end thrust on the abutment ring(s). Light spring pressure between the rings ensures that the clutch plates are held in contact with one another. 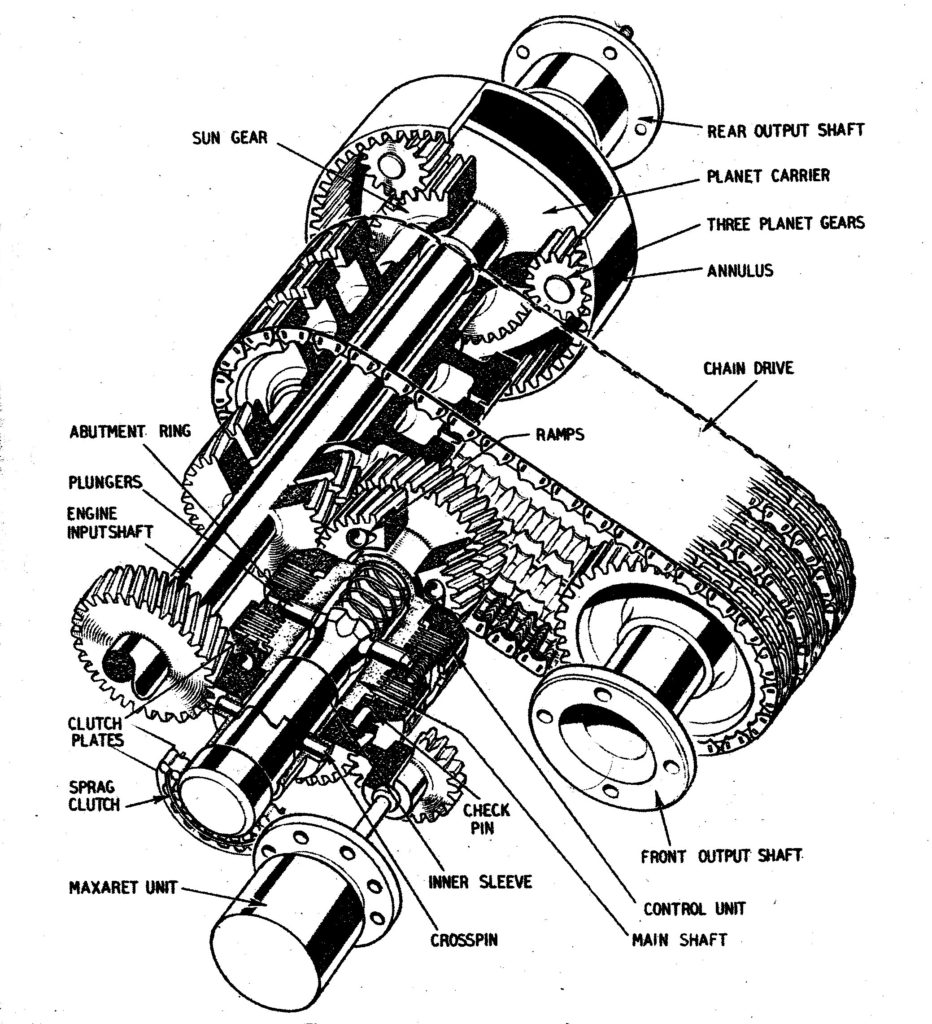 Skeleton view of the transfer box.

Between the outer casing of each clutch and its control gear are three balls positioned in ramps formed in both faces. It will be appreciated that the friction in the clutch pack, due to the spring pressure, will cause the outer casing to lag behind the speed of its control gear. Under normal conditions this will ensure the clutch is inoperative. However, should the speed of the control gear equal that of the outer casing, the balls will travel up the ramps and so exert an axial thrust that engages the clutch. The control gear and the main shaft will now revolve together and so lock the sun gear and planet carrier. This effectively couples both pairs of road wheels together, although they are running at different speeds. In this particular design the front wheels are permitted to over-run the rears by 16.5% and the rear wheels over-run the fronts by 5.5%.

To obtain these speed differences one clutch and its control gear revolves faster than the main shaft while the other clutch and gear turns slower.

Any possibility of all wheels locking is effectively prevented by the Dunlop Maxaret unit. Driven by the planet carrier it senses the mean deceleration of front and rear road wheels.

When reversing, a simple one-way clutch or ‘free-wheel’ locks its inner race to the gearbox casing. Face dogs on the end of this race engage with similar dogs on the inner sleeve. Rotation of this sleeve within the main shaft is prevented by a crosspin, so that any rotation of the main shaft in a reverse direction forces the sleeve to move axially within the shaft. The radial plungers can now move inwards which, in turn, allows the abutment rings to move axially along the main shaft. The outer casing member, its relative movement to the control gear limited by pins, is therefore, prevented from exerting a thrust onto the clutch plates. As soon as the vehicle moves forward the sleeve is pressed back to its normal operating position by a spring.