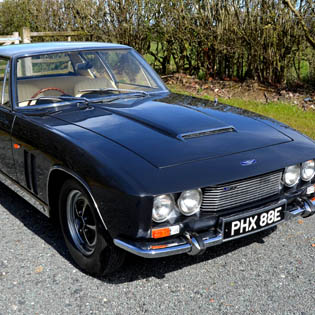 Vignale Jensen FF chassis number 119/004, was acquired for the Museum collection in 2008. The car, first owned by Clive Carr, Chairman of the News Of The World , was the first Jensen FF sold to a customer. Today it is believed to be the earliest surviving Jensen FF. The Museum looks at the car’s history from 1967 to date.

Registration changes: From PHX 88E to 1CUC and back to PHX 88E

This Jensen is the third FF built by the Italian company, Vignale, on Jensen Motors’ chassis, 119/004

Jensen Motors’ Non-Productive Jobs ledger, tells us that the chassis and suspension for Jensen chassis numbers 119/003 and 119/004 was started on 21st July 1966, and once completed would be sent out to Vignale in Italy. 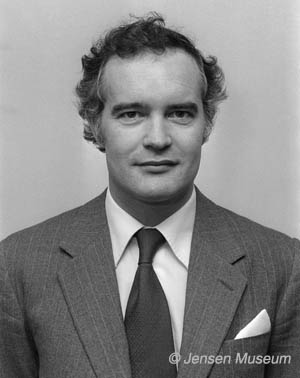 Mr.Clive Carr the Chairman of the News of the World newspaper had long been an enthusiast of Jensen cars. With the original publicity given over to the FF in 1965 and again in 1966, he made it known to Jensen Motors Ltd that he wanted one of the first available cars.

Carr had his personal registration plate ‘1 CUC’ assigned to the car shortly after delivery.

At one point between 1969 and 1970, 119/004 was involved in a major accident causing significant damage to the rear of the car. Whatever the circumstances of the accident were, the car was transported back to Jensen Motors where it received new panelwork at the rear. The work came to a total cost of £1,412.10.0.

During 1969, Rupert Murdoch and Robert Maxwell both made a bid for the News of the World newspaper, written assurances were given to the Carr family by Murdoch that if the Carr family supported him instead of Maxwell, he promised not to seek to increase his share holding above 40%. Additionally he also outlined that Clive Carr could remain as joint Managing Director alongside himself.

The Carr family agreed in principle to supporting Murdoch instead of Maxwell, if he was to be the lesser of the two evils, is difficult to ascertain. However, shortly after Murdoch purchased the News of the World, he reneged on the agreement to allow Carr to remain on as Joint Managing Director. One month after the deal was completed, Murdoch then started purchasing more shares in the company, giving him a stake far in excess of the agreed 40%. 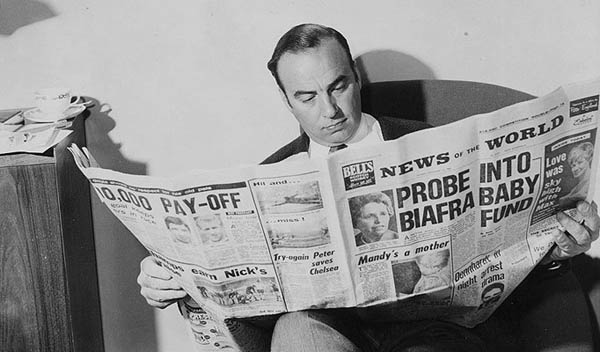 By February 1974 the News of the World Organisation Ltd disposed of 119/004 to a firm specialising in pre-owned cars. The firm, Clifford Sales Ltd in New Road Southampton, kept the car a few months and then sold it within the trade.

The new owners within the trade, were French Street Motors, conveniently located in French Street, Southampton. This firm also registered 119/004 to their company and found a buyer for the car within a few months.

An owner of a building company, Carlow Construction Ltd (also based in Southampton) purchased the car from French Motors, this owner likewise did not keep the car for very long. Some nine months later in July 1975 the car was disposed of.

119/004 was now in Abergavenny, Wales, under the ownership of a company called Creshouse Ltd. The FF only stayed with this company for six months before being sold yet again.

A Mr.G.A.Barratt from Newland, Malvern, purchased the car next and registered 119/004 in January 1976, Barratt kept 119/004 for ten years although apparently the car was little used for much of his ownership.

Keith Johnson, a known Jensen enthusiast from the 1980s, saw the advertisement, set up an appointment to view the car and purchased 119/004 on the 22nd March 1986. He kept the FF stored through until 1992, but had no time available to accomplish any restoration work.

Realising work was not going to take place in the near future, Johnson had the ‘1 CUC’ registration number removed, and the car re-assigned the number ‘HBV 334E’, in preparation for selling. 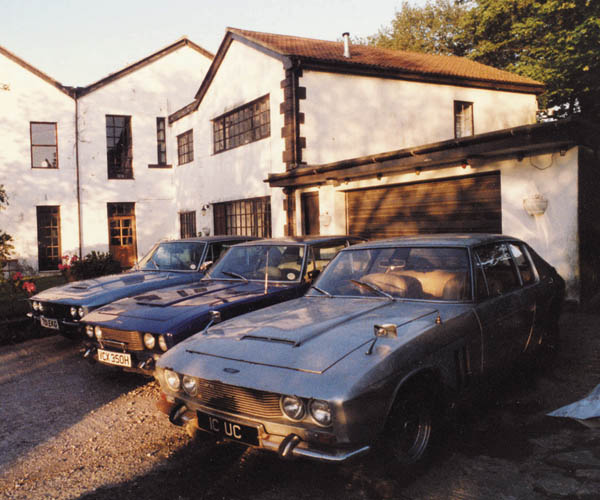 119/004 together with two other Jensen FF cars owned at the time by Keith Johnson.

Johnson drove 119/004 to the 1992 Jensen International Weekend, where he offered the car for sale at £15,000. No one showed any interest and so by October 1992, Johnson placed the car into ‘Penhow Auctions’.

Martin Whiffen had gone to the auction with the intention of purchasing an Aston Martin, on seeing the FF, he decided to bid for this car instead.

All other minor build nuances of Vignale were also to be retained. Whiffen relented on one point, and that was the leather interior trim. Vignale had trimmed 119/004 in a specific light tan brown shade of leather. Whiffen was not at all keen on the colour and took the decision to have the entire leather trim replaced in a magnolia Connolly leather.

The completed car was brought to the 1994 Jensen Owners’ Weekend, and was entered into concours, it achieved first in its class. After the weekend, Whiffen had 119/004 transported back to Cropredy Bridge Garage for further work. Whiffen’s intention was to have 119/004 brought up to such a high level of perfection, that he would win the coveted ‘President’s Cup’.

As work progressed on 119/004, Whiffen managed to obtain the car’s original registration number ‘PHX 88E’ from the ‘DVLA’. Over the next couple of years 119/004 would go on to win not just first in class, but also the ‘Presidents Cup’. 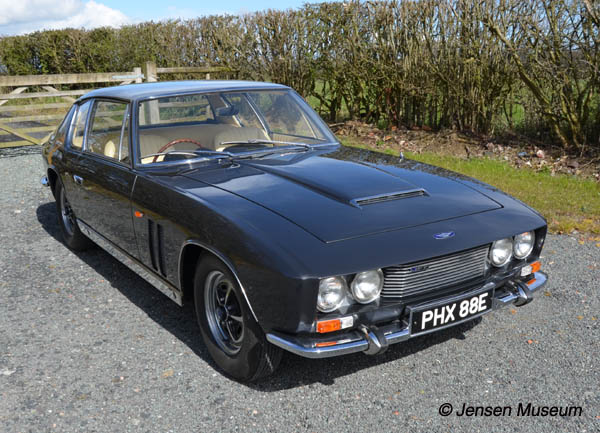 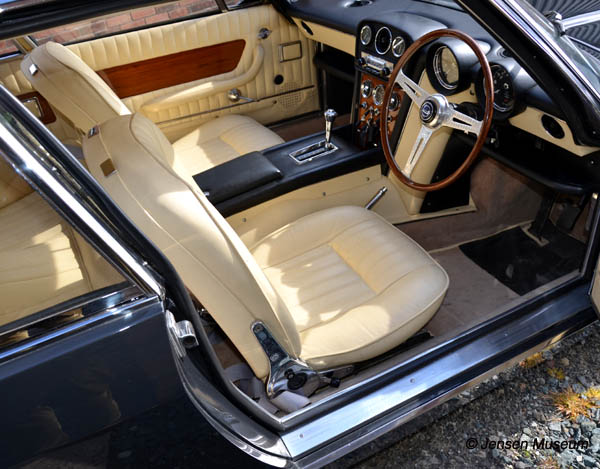 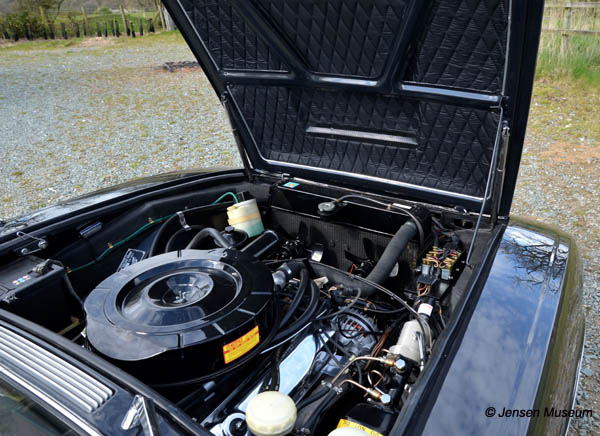 119/004 appeared in the television programme ‘The Cars the Star’ and was also the subject of two articles. The first published in the March 1997 issue of Classic Car magazine, and the second in the June 1997 German published motoring magazine Autobild.

Whiffen retained ownership of 119/004 through until 2008, at which time the car was acquired by the Jensen Museum.

The focus of the Museum is always towards conservation rather than restoration. This is particularly important with any Vignale-bodied Jensen. However, work to 119/004 had to be looked at in a retrospective way. Since the car had already been the subject of a full restoration to concours condition, it was going to the Museum’s objective to look at the restoration work, and identify any short comings.

Body: The car body had been restored sympathetically. Much of the Vignale panelwork had been left in place. There were some paint issues, particularly to the bonnet. It was decided to strip the paint back to metal, check panelwork, and repaint back in the original charcoal grey. Once again, the original restoration had been undertaken to a high standard, and the charcoal paint match was perfect, as was the mist grey roof panel. It was the Museum’s decision to retain the rear pressed panel to 119/004, which had been fitted after the accident, since this represented apart of the car’s early history. If the panel had been fitted at a much later date; perhaps due to rust; the Museum would have had a panel replaced with one which was hand made to replicate that of Vignale.

Mechanics: The original high standard restoration of 1992-1994 meant that there was little to change within the engine-bay. Some minor parts were changed, to bring everything back to the original 1967 specification. During the 1970s, the four-wheel-drive transmission required work. This was replaced by Jensen Motors. The Museum managed to acquire the original unit for the car, and this has been rebuilt. It is the Museum’s intention to refit the original unit to 119/004 (see feature under Conservation | Restoration). During the 1990s, a set of 6″ Rostyle wheels had been fitted to 119/004, along with radial tyres. The Museum has replaced these with the correct 5 1/2″ Rostyle wheels with crossply tyres.

Interior: The original tan leather trim had been replaced with a re-trimmed interior in magnolia. The Museum has now sourced the correct type of Italian style tan grained leather.  Marque specialists, Rejen, are in the process of re-trimming the car back to tan, and putting back in the Vignale nuances of trim (2017) (see feature under Conservation | Restoration).