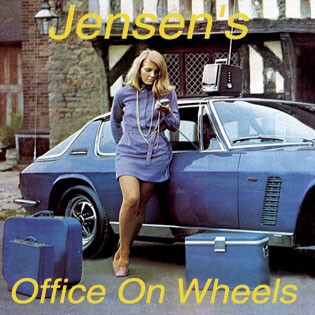 Back in 1969, Jensen’s publicity guru, Tony Good, came up with a novel idea. An office on wheels for the fast living company director. With ship designer, Jon Bannenberg on board to create the look, and Good using his contacts to get the unique car into Harrod’s Banking Hall, the stage was set for Jensen’s Director Model.  It remains a tangible reminder of a unique idea from Good Relation’s Chairman, Tony Good. The Museum looks in depth at the history of the Director Model. 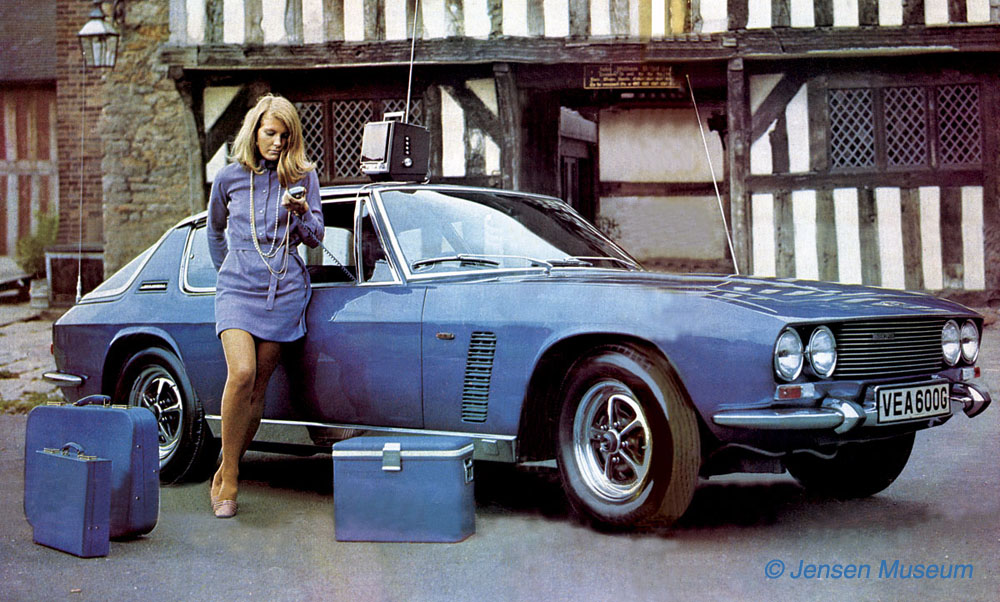 The Director Model car along with various pieces of ‘office’ equipment and luggage. Good’s PA, Kate Eccles wears a blue dress, and is photographed using the dictaphone.

Always’s thinking outside of the box, Good Relation’s Chairman, Tony Good, came up with a novel idea. The idea was an office on the move for the fast living company director, all packed in a fast prestigious car called an Interceptor.

Having run the idea past Jensen Motors Managing Director, Carl Duerr, the idea was given his seal of approval. Initial discussions took place between Good, Duerr, and Jensen Motors Sales Manager, Wyndham Powell.

After developing the idea, and discussing the contents of the mobile office, a suitable name emerged, the Director Model. Good mentioned that a top-name designer needed to be brought in to devise a unique interior for the Director Model, and through his contacts, QE2 designer, Jon Bannenberg, was contacted, and agreed to the commission.

The commission is recorded in Bannenberg’s Job Book simply as ‘Jensen Pod’ with Job Number 1073. 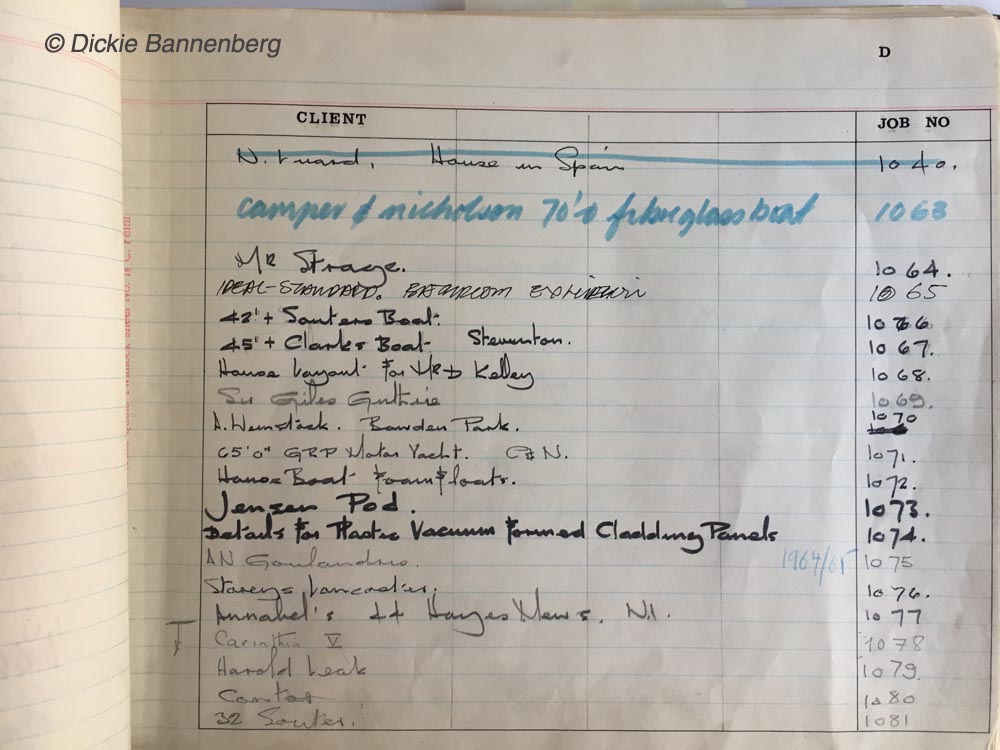 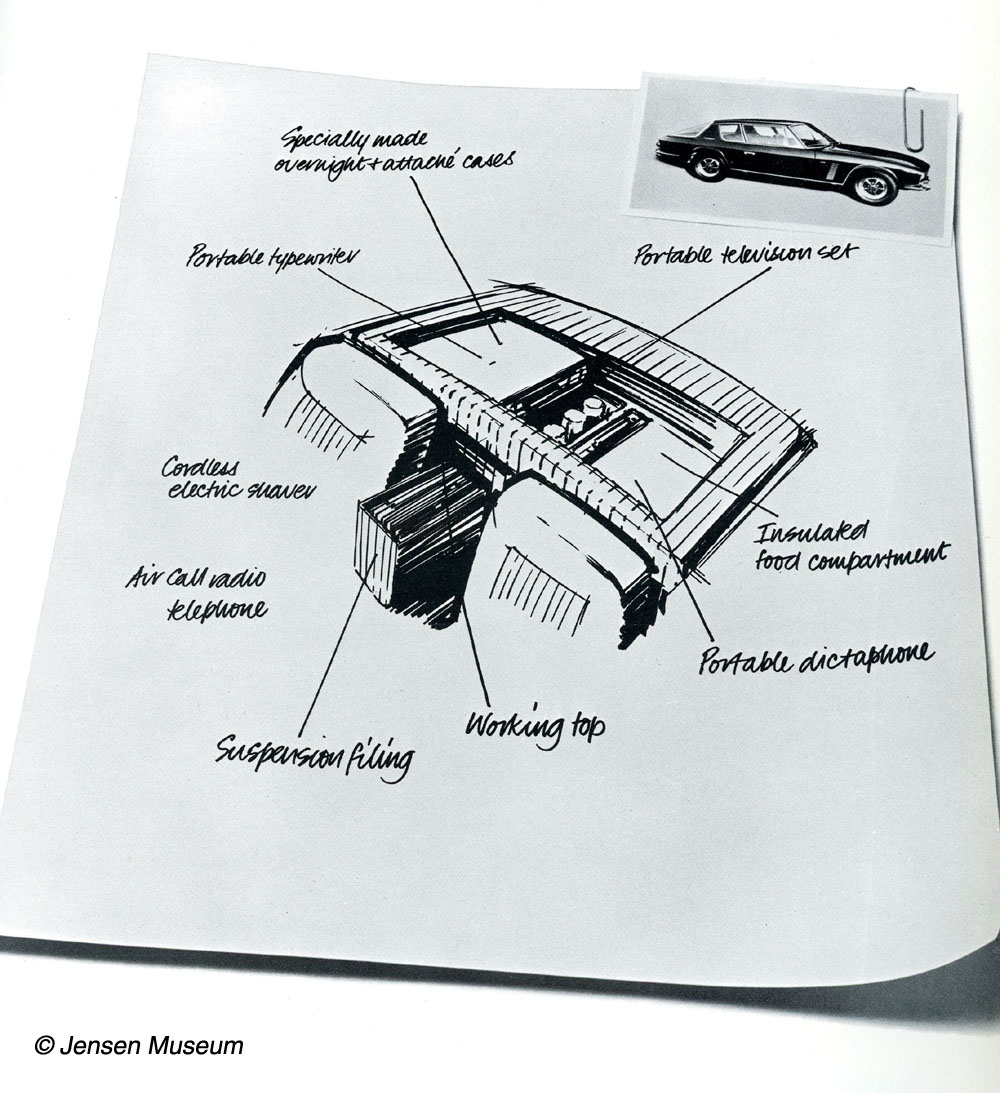 Bannenberg came up with an unusual blue theme, with blue leather trim with blue velour seat facings, along with a blue velour headlining and sun visors. Even the steering wheel was wrapped in a special colour coded blue leather. The car was finished with a special metallic cornflower blue paint.

The inside held everything a busy director might need, and the rear seats had to be sacrificed to fit everything in. Equipment included, a dictating unit, a portable typewriter, a small filing system, an Air-Call radio telephone, an insulated food container, a portable TV, colour-matched blue attache and overnight cases and even an electric razor.

With the idea agreed, Jensen Interceptor chassis number 115/3422, was built up to Bannenberg’s design. Once completed the car was registered as ‘VEA 600G’.

The finished creation was made ready for summer 1969, and, with the help of Good Relations, Jensen Motors managed to get the Director Model on display within the Banking Hall of Harrods in Knightsbridge, to coincide with the reception for the new 1969 Miss World, Penny Plummer.

Good remembers the situation very well, “I had noticed the RAC always had a car on show within Harrods. Being a member of the RAC Club, I discussed the idea of placing a Jensen on display at Harrods, and they pointed me in the right direction. The outcome was, we managed to get the Director Model on display within the Banking Hall. It was a real coup for us.”

With the stage set, Good wanted an attractive looking girl on board for the press day. Through his contacts, a young girl, Kate Eccles, was put forward as a possibility. Her father was a director of Heinz, and she was starting out in the world of promotion work. The interview went well, and Eccles was given the job. Somehow Eccles had heard that Good was in need of a PA, so after the event, she asked Good if he might be prepared to give her that position. She remained as Good’s PA until she later married Lord Vestey. Meanwhile, everything was now in place for the event at Harrods.

The completed Director Model was sent to the service section, where the Company’s cleaning supremo, Maud Pritchard, had her own bay. Known for her attention to detail, Pritchard cleaned and polished the Director Model, along with Penny Plummer’s loan Interceptor, in preparation for the cars to be transported down to London. 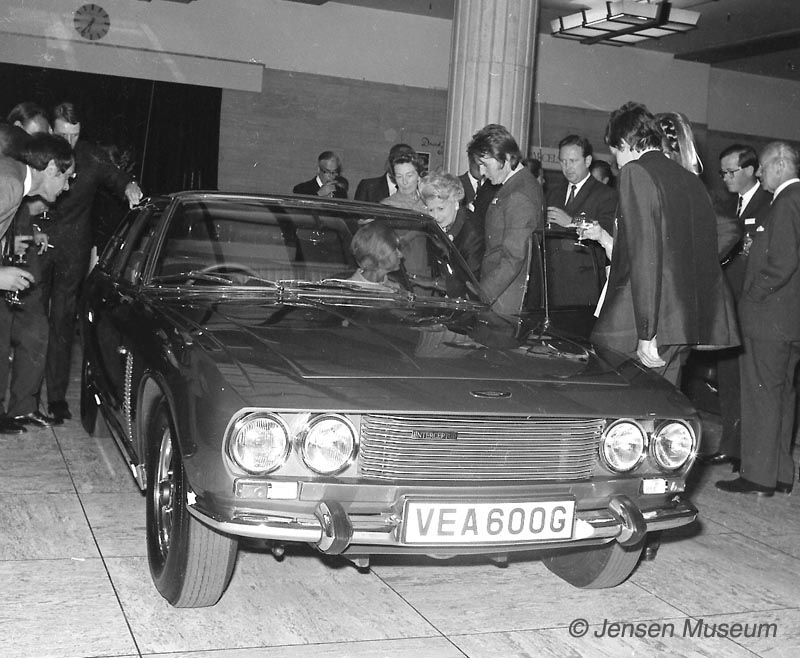 The Director Model photographed in the Banking Hall of Harrods. Photograph from the Michael Cooper Archive.

Carl Duerr was at Harrods on 17th June 1969, to unveil the Director Model to the waiting press, and invited guests. As well as Duerr,  Tony Good was on call from Good Relations, waiting to promote the Director Model in particular, and the brand in general,  while Jensen photographer, Michael Cooper, was brought in to photograph the occasion.

Good had been instrumental in bringing the Director Model press launch in line with the reception for the new 1969 Miss World, Penny Plummer. As a further method of creating publicity for Jensen Motors, Good had suggested they give Plummer loan of an Interceptor (chassis number 115/3413, registration VEA 500G). 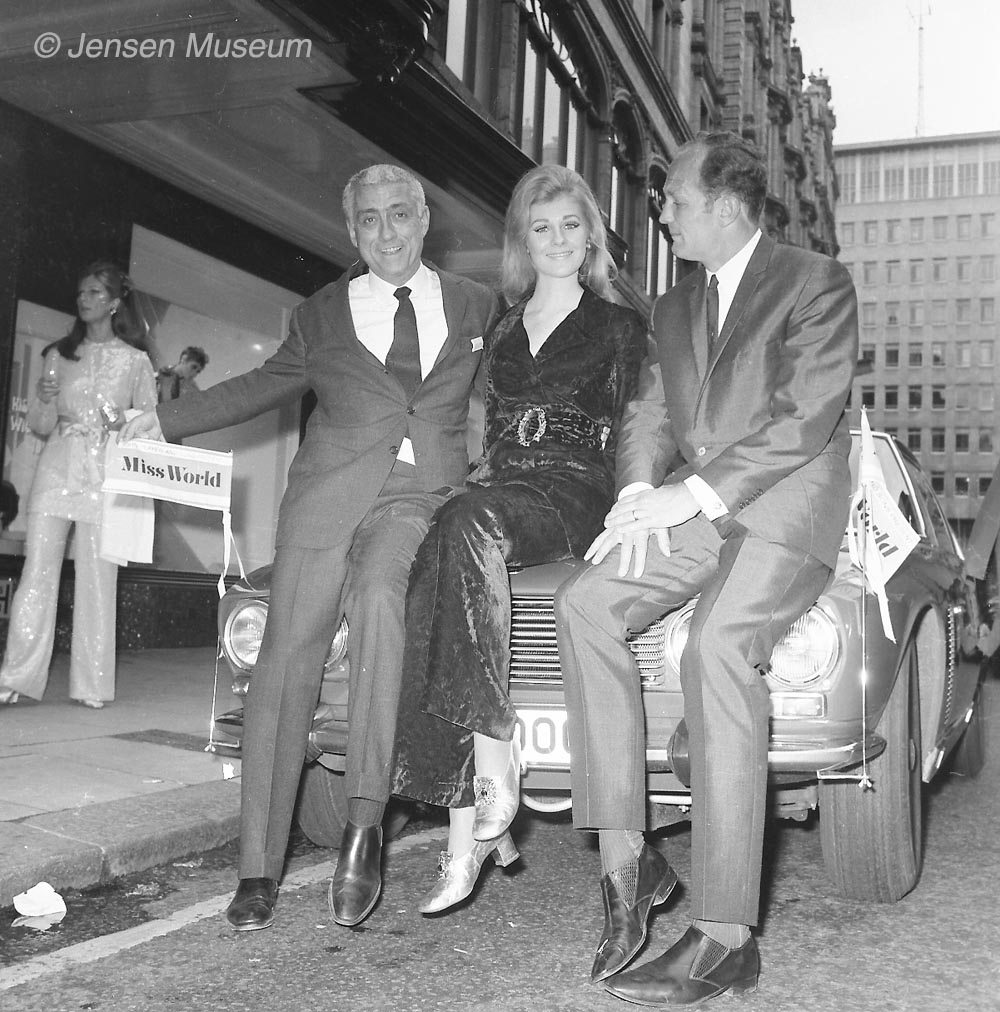 Her metallic fawn coloured Interceptor was parked outside  Harrods, with Miss World pennants flying either side of the front bumper. Another photo opportunity was set, with Duerr, Miss World, and boxer, Henry Cooper (himself an Interceptor owner) sitting on the front of the car. 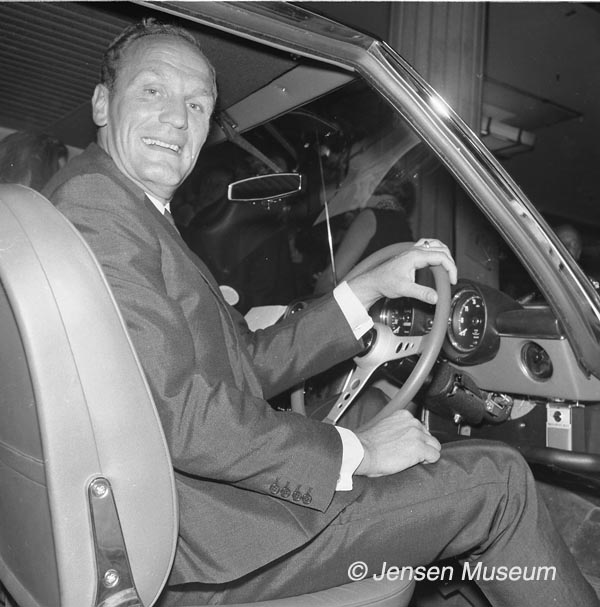 The price tag for the Director Model was a meaty £6581, hugely more expensive than a standard Interceptor.  Duerr was never expecting there would be a rush to buy this executive toy; that wasn’t the point. The Director Model became its own publicity machine for Jensen Motors, and caused much positive discussion at the time.

After its launch at Harrods, the Director Model made the rounds of the various Jensen dealerships, and even featured in the Thames Television Magpie series in November 1969.

With the car’s return to West Bromwich, and having achieved the required publicity for Jensen Motors, it was decided to sell the car off.  Duerr and Powell agreed the best way of selling this particular Jensen, was to return the car to standard specification. Former Jensen Service Technician, John Page, remembers the Director Model coming into the service section,

“service had to strip out all the interior, and then Eric Ward from the Trim Shop was sent down to see what needed re-trimming to turn the car back to standard specification.”

The Director Model was stripped of its ‘office’ during December 1969, and trimmed back to normal Interceptor specification, with various items of the ‘office’ being commandeered as souvenirs by employees at Jensen Motors. The attache case was commandeered by the then Service Manager, David Millard.

REQUEST: Do you have any items from the Director Model, or further information, if so we would love to hear from you.