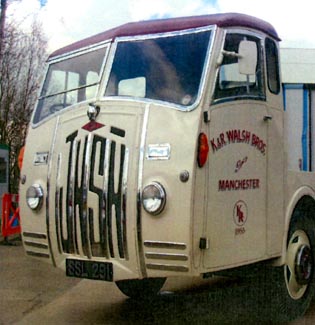 In 1955, Jensen Motors built their prototype JNSN ‘Freighter’, the longest flat-bed lorry on the market. By 1993, the same prototype lorry was slowly disintegrating in a field outside Sevenoaks in Kent. Close to being scrapped, luckily, the lorry fell into the hands of the Walsh brothers from Manchester. This is the story of their epic restoration of Jensen’s first JNSN ‘Freighter’.

The Jensen JNSN Protoype ‘Freighter’, in use by Raymond Way Motors in 1955.

Raymond Way Motors Ltd from Kilburn in London were one of the biggest car dealers in the 1950s, specialising in disabled cars, and Gordon’s Micro-Cars. These cars were delivered throughout the UK, and Raymond Way wondered if a transporter could be manufactured that could take a greater quantity. Enter Jensen Motors. Raymond Motors contacted Jensen Motors asking them if they could manufacture a transporter to carry a greater quantity of cars. Jensen were producing the JNSN light-weight lorry at the time, and their drawing office looked at ways of elongating their standard lorry.

Coming up with a solution, Raymond Way Motors commissioned the manufacture of an ‘extended’ lorry. The solution Jensen had come up with was to keep the wheel-base the same, but to move the engine and cab forward of the front-axle. This increased the length of the flat from 23ft 7” to 25ft 4 ¼”. This extra length meant that the completed lorry could carry an extra car, based on the fact that Raymond Way Motors fastened the cars across the flat, not along the flat. Additionally, Jensen Motors mentioned they could also manufacture a two tiered trailer, which could be attached to the lorry with a towing hook. The trailer meant another five cars could be carried. Raymond Way ordered on the trailers at the same time.

Other special features included rear wheel arch covers, front and side bumpers, chrome hub caps, lowered head lamps, and 17 extra chrome strips.  The completed lorry with trailer would certainly be eye catching when seen on the roads of Britain.

The JNSN prototype, chassis number 6445991, was ready for collection by Raymond Way Motors during 1955, and after the prototype, Jensen Motors tweaked the design by increasing the wheel-base, which gave a flat of 25ft 6”. They also fitted a 5 speed gearbox and a glass fibre roof to the cabin. Named the Jensen Freighter, the extended lorry remained in production for the next seven years, with Reynold Tubes being one of the bigger customers of the Freighter.

Meanwhile, Raymond Way Motors’ JNSN Freighter was providing good service, and was used by the Company for many years. Eventually, the lorry was sold off to another car dealer operating from Kings Langley. They were moving quantities of second-hand and scrap cars. By the 1980s, the lorry had been sold again to a company near to Sevenoaks in Kent, and was suffering from neglect. In 1987, during the bad winter, a tree was up rooted and landed on the roof of the Jensen lorry, causing much damage. From that point, the original registration number, 945 EMP’ was removed, and the lorry was left to rot. 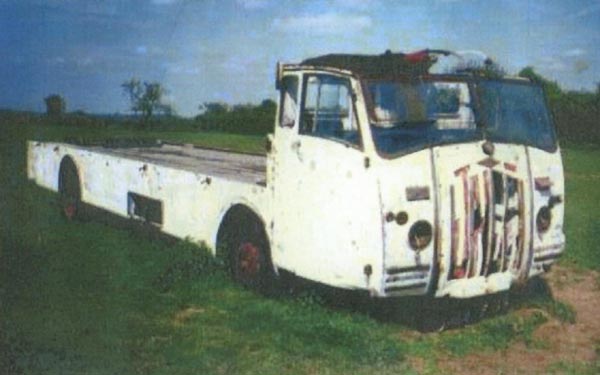 The Jensen JNSN Prototype Freighter left to rot in a field. Photograph taken in 1993.

At the beginning of the 1990s, the Raymond Way Freighter was offered for sale. By this time the lorry was in a poor state. Left in the open, and with the metal roof badly damaged, rain had been getting into the cabin, and rotted most of the cabin area, including the metal box frame.

Classic Commercials restorer, Frank McDougall from Scotland, heard about the Jensen Freighter, and bought the remains. During his ownership, he applied for a new log book, had an age related registration number placed to the lorry (SSL 291), and started some repairs to the cabin. Soon after, another project took over, and the Jensen was left abandoned in a corner of his workshops, gathering both dust and debris. 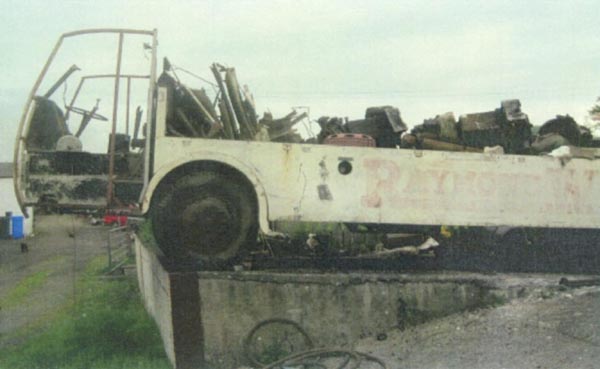 The ‘Freighter’ pulled out of its resting place in Aryshire, and waiting to be loaded for transportation down to Manchester. Photograph taken 2013. 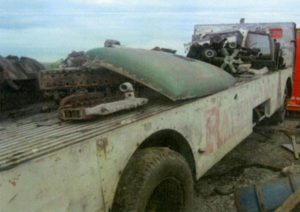 View down the side of the ‘Freighter’, the replacement fibre-glass roof can be seen on the flat-bed, along with various other spare parts. 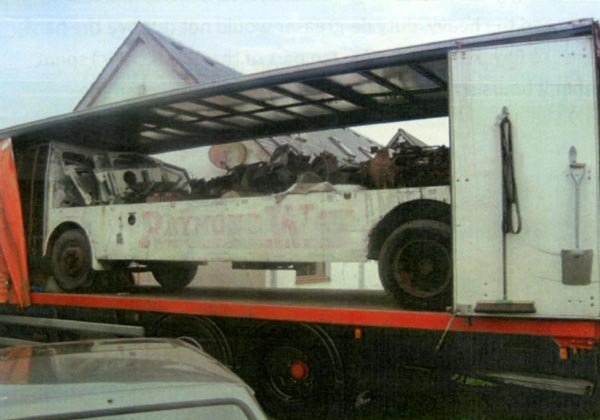 The ‘Freighter’ carefully manipulated onto the lorry ready for its journey to Manchester. The original red Raymond Way Motors sign writing could still be seen, even with years of neglect.

In 2013, via friends, Kenny and Ray of KR Walsh Brothers of Manchester, heard about the Jensen Freighter, after their friends had visited McDougall. With that, the pair of brothers drove up to Ayrshire to visit McDougall and view the Jensen. 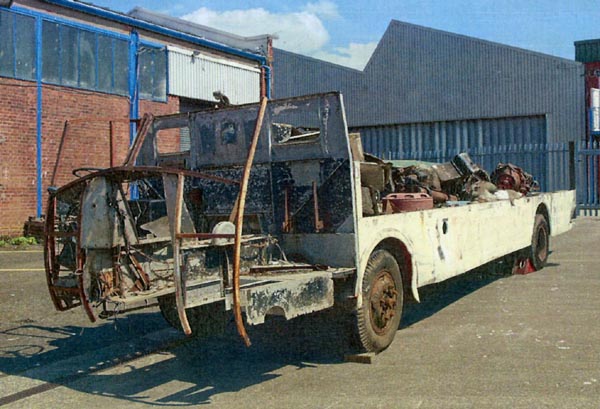 Arrival of the Jensen JNSN Freighter at Manchester.

The visit was fruitful, and the two brothers left, having given over a deposit, and with an agreement to pick the Jensen up within two months. On the 25th June 2013, the Jensen lorry was finally unloaded in their premises in Manchester.

Finally, the brothers could put together a detailed summary of work and parts required, “Every body panel would have to be refurbished or replaced. The cabin is in a poor state, the dash is just hanging loose, All the wiring has perished. There are no seats in the cab, and the steering wheel and steering column, are in poor condition. All the windows will have to be re-made in toughened glass. The door drop glasses are okay, but the doors will have to be remade. These are no easy repair. The doors are complex with double bends in the frame, and no adjustments for the door hinges. All the metal box section is rotten, and the inner and outer panels are badly damaged.”

The first job after clearing the lorry of all parts, was to remove the body off the chassis. This is no mean feat. Since the body and chassis are integral to the lorry’s strength, there are no less than 150 nuts and bolts holding the body to the chassis.

It took four men three hours to undo (or cut off) all the nuts and bolts, and once ready for removal, a hiab was used to lift the body off.

The body being removed from the chassis

Removing the body from the chassis. 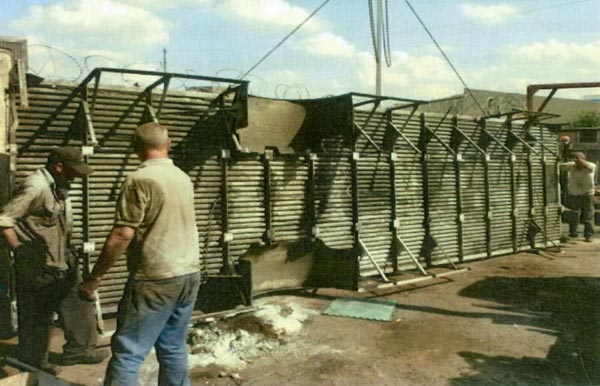 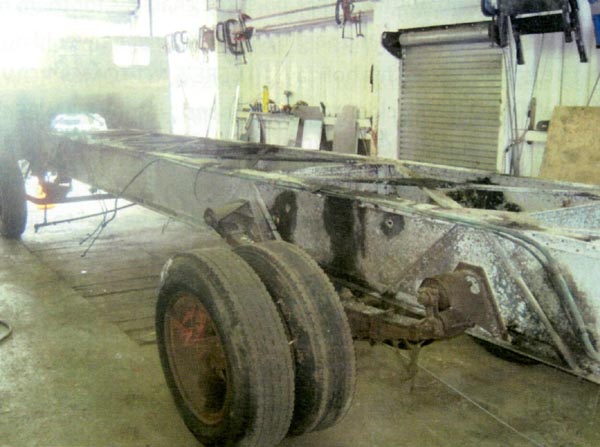 The ‘Freighter’ less body moved into the workshops. Inspection of the main centre chassis found it to be in a surprisingly good state of preservation. 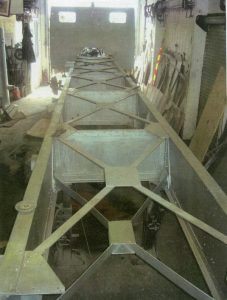 The chassis having been carefully sand-blasted and sprayed in silver oxide.

The actual chassis had survived in generally good condition, although this will be sand blasted and painted in silver oxide. Then all the suspension and braking system is removed, cleaned, rebuilt and made ready to go back on. 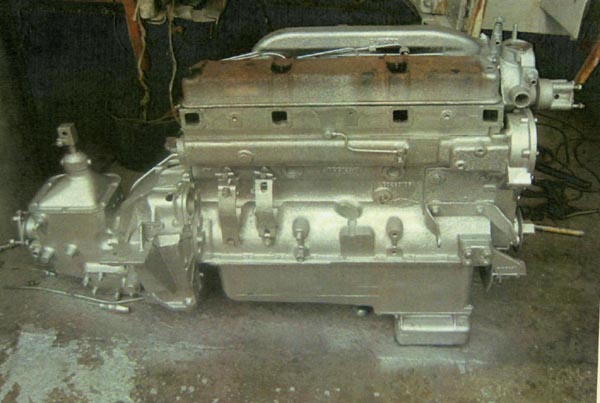 The Perkins engine was completely overhauled.

The engine was in a poor state, since water had crept in rusting the cylinder bores, necessitating a full strip down, and being sent away for refurbishing. 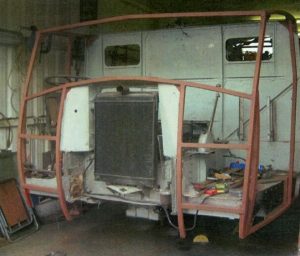 Metalwork to the cabin. 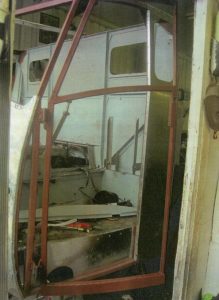 The door-frames required some skilled metal-work.

Meanwhile, work was progressing to the cabin. It transpired that McDougall had acquired a later Jensen Freighter fibre glass roof panel, since the original prototype metal one was both badly damaged and rotten. Some skilled work would be needed to make this fit and look correct.

With work progressing well, it is close to the main body being re-fitted back onto the chassis. Once again the Walsh brothers enlist the help of their friends. The Walsh brothers’ 1968 Hotchkiss DH80 with hiab is pressed back into service.

Aluminium body panels taking shape. Headlights and indicators are checked for fitting at this stage.

Metalwork to the back. The original towing hook remaining in place.

Now the main body was on, new outer panels had been made from aluminium exactly to the pattern of the originals, and fitted into position. The engine and gearbox was also finished, along with the front cross member. Fitting the drive-line into position was one of the more straight forward jobs. Soon the cabin had been fully rebuilt, and the roof made to fit, the mechanics were in place and the chance to start the lorry was imminent. When the moment arrived, the lorry started quite easily, quickly building up 60lbs of pressure.

With new tyres and refurbished wheels ready, the lorry was finally ready to be despatched to the paint-shop of Belle Vue Coaches, in Manchester. 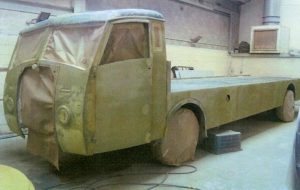 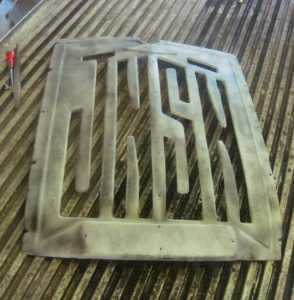 Once at the coach works, the body was prepared ready for the etching primer, and then the filling primer. Lastly, the lorry received a coat of Old English White, with a maroon painted roof to the cabin. 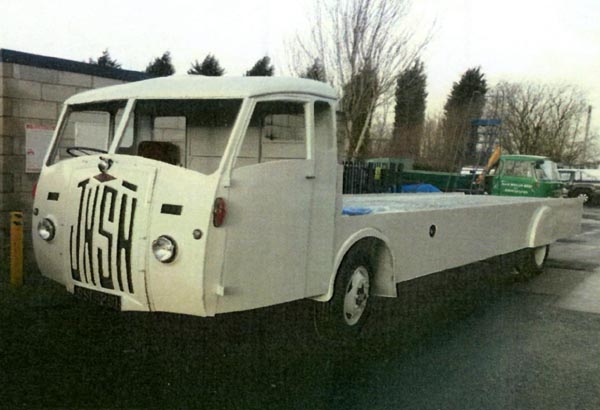 The ‘Freighter’ finished in Old English White, the roof would be painted maroon.

An end point was now in sight, as the brothers fitted up rubbers, the re-made toughened glass, lights and other accessories. Jensen had put 17 extra pieces of chrome to this prototype lorry, but inevitably some of these had been lost over the years since it was built. Kenny Walsh made up the missing chromes out of flat steel bar, and had them chromed. Front seats, similar to what would have been fitted originally were sourced, re-upholstered in red and fitted in place.

Lastly, John Etchells a local sign writer, paints the K & R Walsh Brothers name and logo to the sides of the lorry. 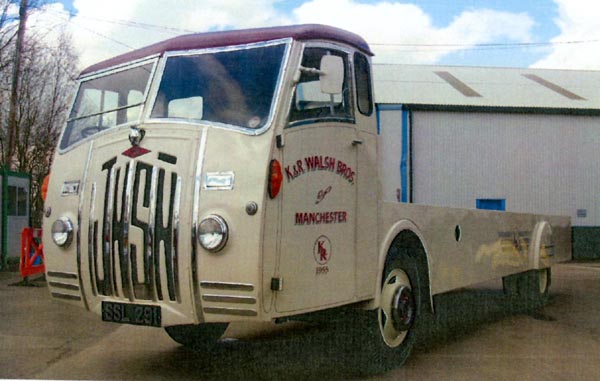 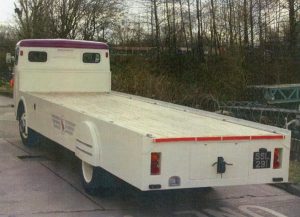 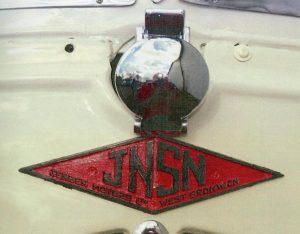 The Jensen JNSN badge, in all its glory.

This epic restoration was finished in just over six months, undeniably through the persistence of the Walsh brothers, and their commitment of hours that often descended into 10-12 hour days.

The sympathetically restored Jensen Freighter stands as both a flagship restoration to the Walsh brothers, but also as a testimony to the beautifully crafted lorries manufactured by Jensen Motors.