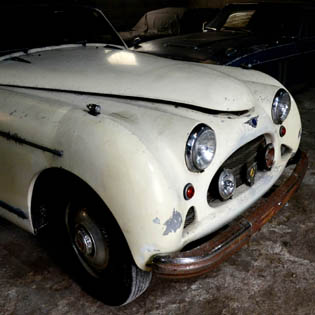 Jensen Interceptor Deluxe, chassis number 63, was completed in late summer 1954. The car had  a specification of ivory paint with red vinyl roof and red trim. Once finished, the car was made ready for the 1954 London Motor Show, where it shared the Jensen stand with a new Jensen 541. The Museum looks at the history that is known about Interceptor 63, and hopes that more information will come to light about the car, and its first owner, Frank Clissold. 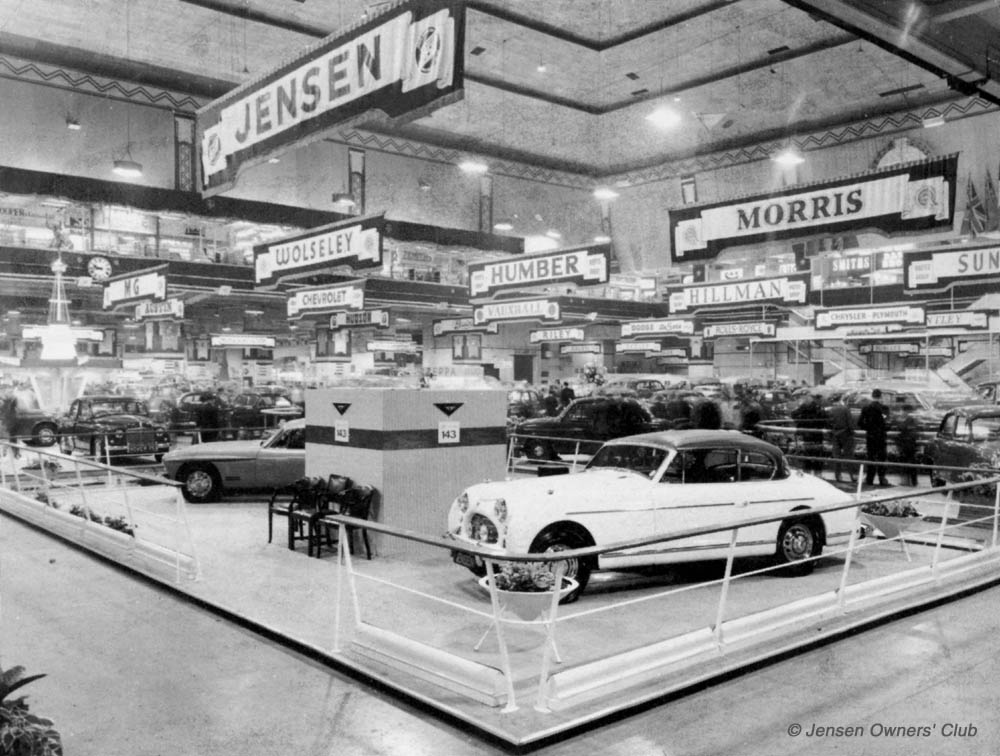 Interceptor Deluxe, chassis number 63, on the Jensen stand at the 1954 London Motor Show. 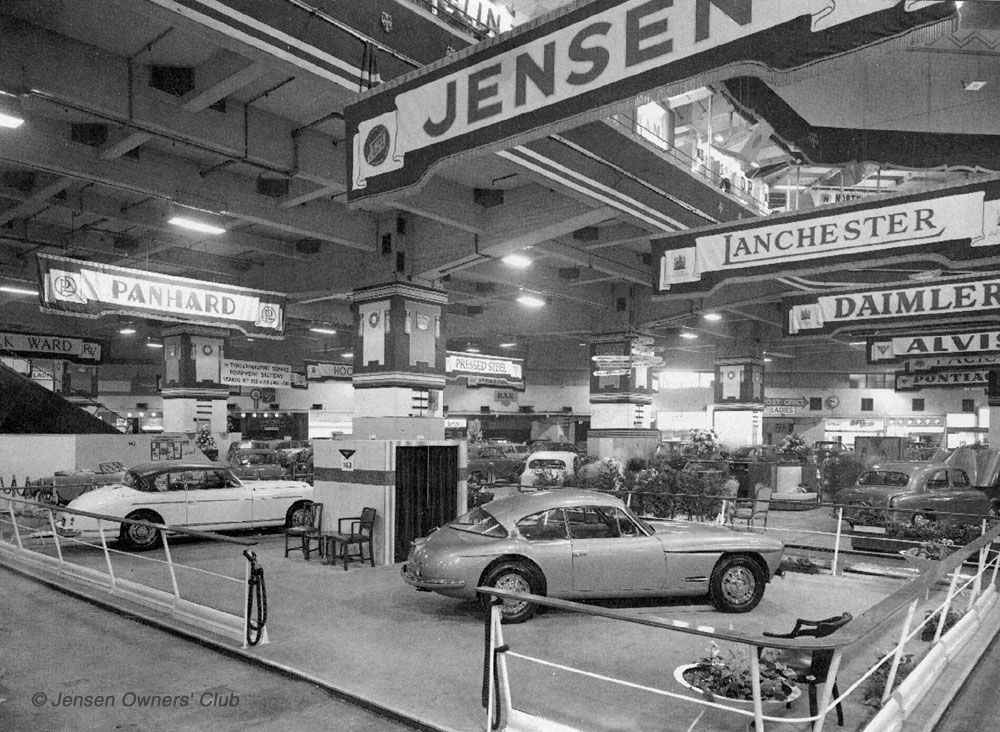 A view from the back of the Jensen stand at the 1954 London Motor Show. 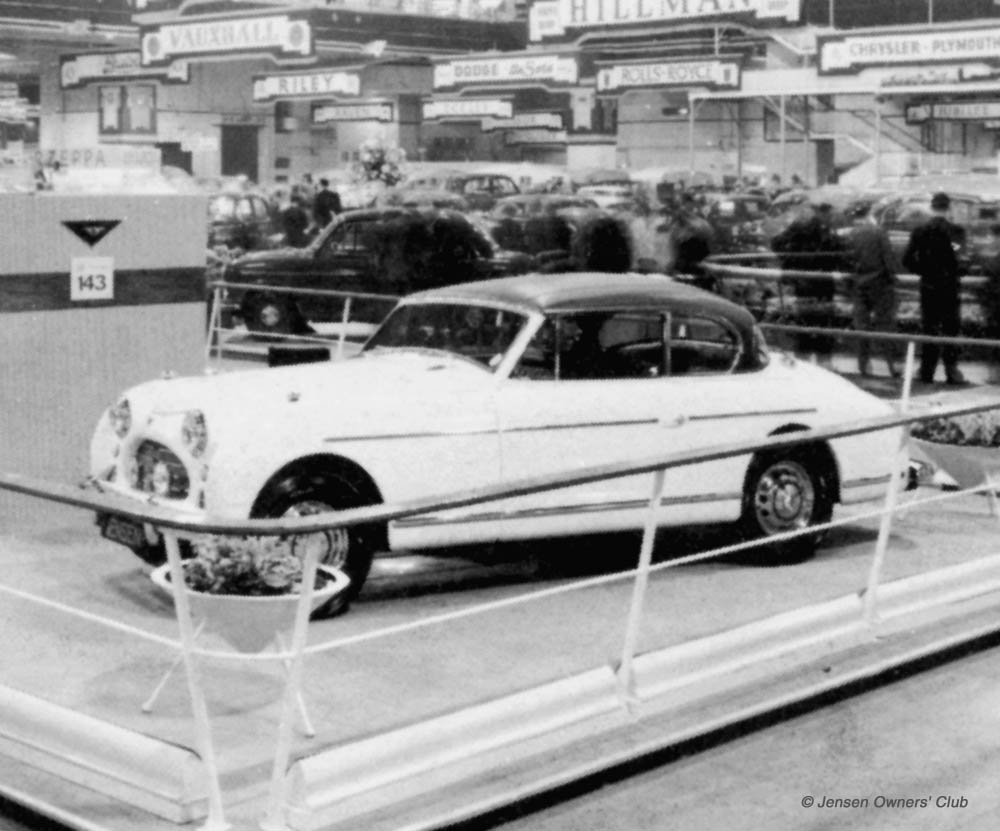 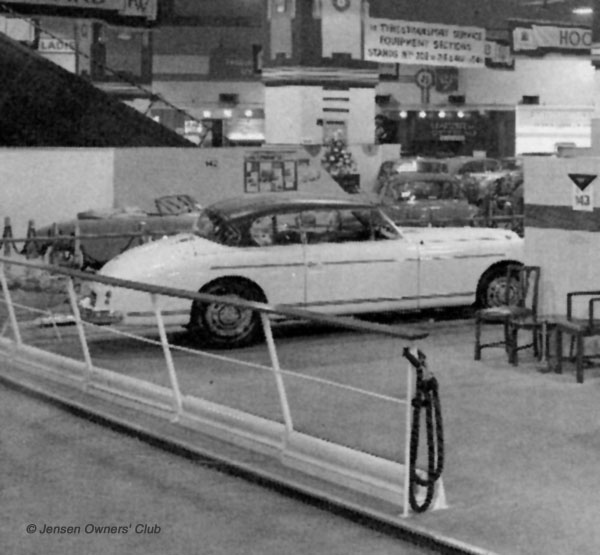 A close-up image showing a rear view of Interceptor chassis number 63 on the Jensen stand.

After featuring on the Jensen stand at the 1954 Earl’s Court Motor Show in London, the Interceptor was assigned the West Bromwich registration number LEA 629 . Afterwards, the car was used as a demonstrator vehicle by Jensen Motors. By March 1955, the Jensen Interceptor was sold to Frank Clissold from Birmingham. 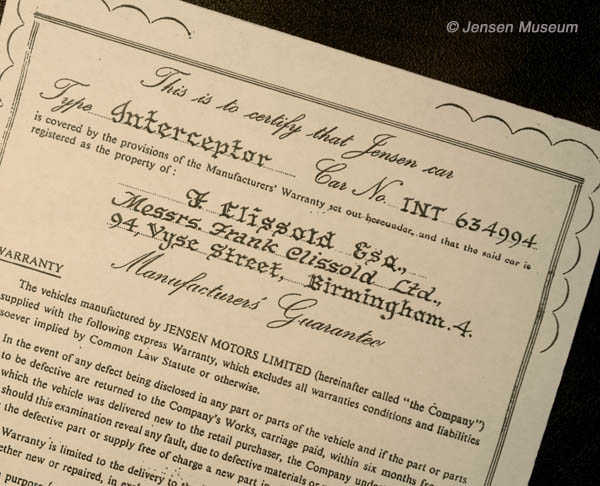 Frank Clissold was born on 14th May 1888, son of Joseph S Clissold and Mary Ann Clissold (nee Law), Joseph Clissold was a boot manufacturer and dealer, born in Gloucestershire around 1853. Frank Clissold’s place of birth is recorded as Birmingham.

In the 1911 census Clissold is recorded as a die cutter working for a silversmith. The family (Clissold is still living at home at this time) lived at 109 Holyhead Road, Handsworth

By 1914 Clissold was foreman with Messrs Baller & Co, stampers and die makers, he was awarded £100 for wrongful dismissal in June 1914 after he was engaged on a 3-year contract but sacked with a days notice after 7 months.

Clissold married Clara Middleton in 1922 and there were two children, John S Clissold, born 1926, and Robert B Clissold, born 1928. In 1930 on the Register of Electors he is recorded as living at 25 Primrose Lane, Birmingham with his new wife, and by ‘Peterbrook, Peterbrook Road, Warstock’, and was working for himself as Frank Clissold Limited from Vyse Street in Birmingham’s jewellery quarter. 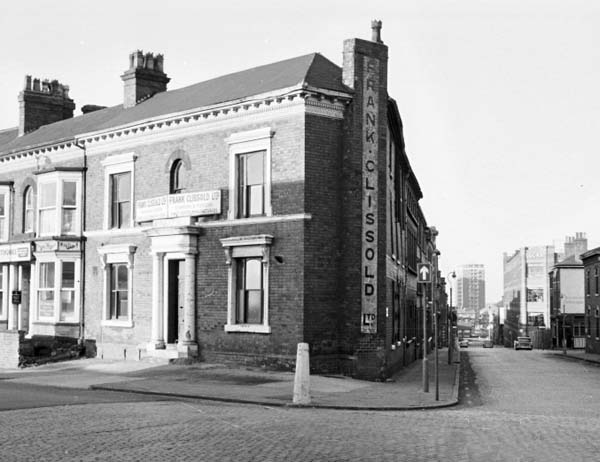 Another view of Frank Clissold’s premises on Vyse Street.

Financially, Frank Clissold Ltd was doing well, and after the war he purchased a Jensen PW saloon (chassis number 4). It would seem that Clissold had a fascination for interesting cars, as during the 1950s he also owned a 1932 Alfa Romeo 8C 2300 Corto.

If Clissold part-exchanged his PW saloon against the Jensen Interceptor, isn’t known, but on the 1st March 1955, he took delivery of LEA 629. Exactly how long Clissold owned LEA 629 also isn’t known, but it would certainly seem he still owned the car in the later 1960s.

The Factory Repair Book shows Clissold’s car was sent back to the factory in June 1965 for repairs, so he still owned the car at that time. In all probability, Clissold owned the car until his death in 1970. Frank Clissold died in Bournemouth in September 1970.

It seems reasonable to believe LEA 629 was disposed of sometime after Clissold’s death.  We know that at the beginning of 1973, a John C.J.Kempton, living in Bromley, Kent, purchased LEA 629. Joining the Jensen Owners’ Club at that time, Kempton stated he paid £450 for the car, and that the car remained in very original condition. At that time the car had covered approximately 44,500 miles from new. Unfortunately,  Kempton doesn’t say if he purchased the car from Clissold’s family, or from a car dealer.

By 1982, the Interceptor had been purchased by Dick Royce. He was working for ERA in Dunstable. This well known motor racing company had been sold to Zenith carburettor Ltd, and then in turn purchased by Solex. The initials ERA had originally stood for English Racing Automobiles, but by the beginning of the 1980s, it had been name changed to Engineering Research & Application Ltd. The initials stayed the same. The new company undertook research and development for carburettor and fuel systems.

Royce’s impromptu purchase of the Interceptor is outlined by his friend David Marriage, who was also working at ERA,

“Dick said he had bought a Jensen interceptor from Harpenden. It would seem that for many years the car had stood under trees in the garden of a large house. The house had been sold for land development and the car had to be moved urgently. Dick decided to save it.

He took a day off work. About lunchtime he appeared back at work looking agitated, as he had trailered the car to his house in Dunstable, only to find it was too large for his garage! Knowing I had quite a bit of land with barns, he asked if I would like the car, so I bought the Jensen from him. Dick then transported the car to my property at Eaton Bray. 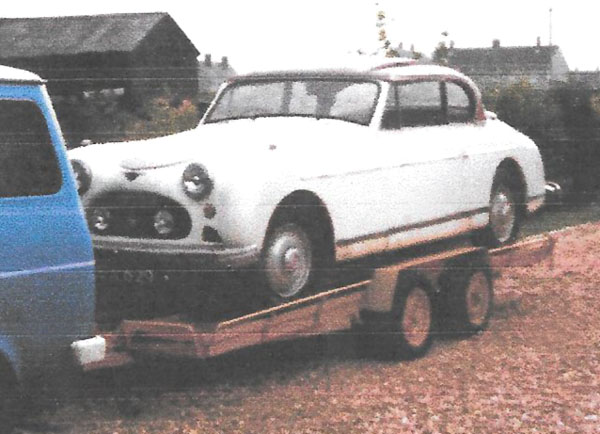 The car was put into one of my barns. We then looked at it and found the engine was seized solid. Putting diesel in the bores for nearly a year did not help. The head would not come off easily, so we took the sump off, removed the big end covers to jack the car up on each piston in turn. With the weight of the car on each piston, we got the engine to turn. I didn’t do anything else to the car, and by 1986 I needed the barn for other things. The decision was made to sell the Jensen. Unfortunately I don’t remember who I sold the car to.”

The purchaser may have been a Mr. Huslop, of Arbtree Farm, Hinxworth. A retired turkey farmer, Huslop had become passionate about classic cars. By the early 1990s the turkey sheds had been had been filled to capacity with classic cars. As age caught up with Huslop, a decision was made to start selling off the collection. So by the beginning of the 2000s, he started to advertise cars from his collection.

LEA 629 was one of the cars made available for purchase. Dutch born Jensen enthusiast, Roel Korzaan, heard about the 1954 Interceptor being for sale in 2004, and went to view the car at the farm in Hinxworth. According to Korzaan the place was full of ramshackle former Turkey barns, which were filled up with old cars – about ten barns in total. He was shown LEA 629, and bought the car immediately.

Korzaan transported LEA 629 to his home Holland, but after retiring to the Doudoyne, in France, LEA 629, found itself back on the trailor on its way to a new home in France. Once there, it was put into storage awaiting eventual restoration. With other Jensen cars also in the queue for restoration, LEA 629 remained in storage until 2017, at which time it was acquired for the Jensen Museum.

LEA 629 photographed in Shropshire during 2017. 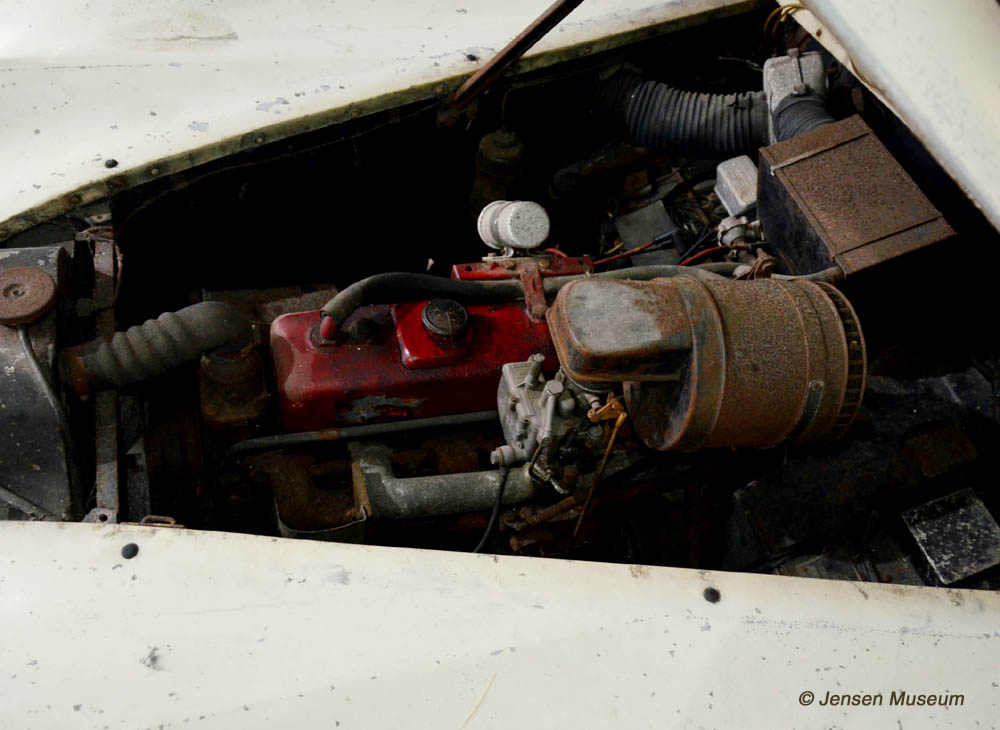 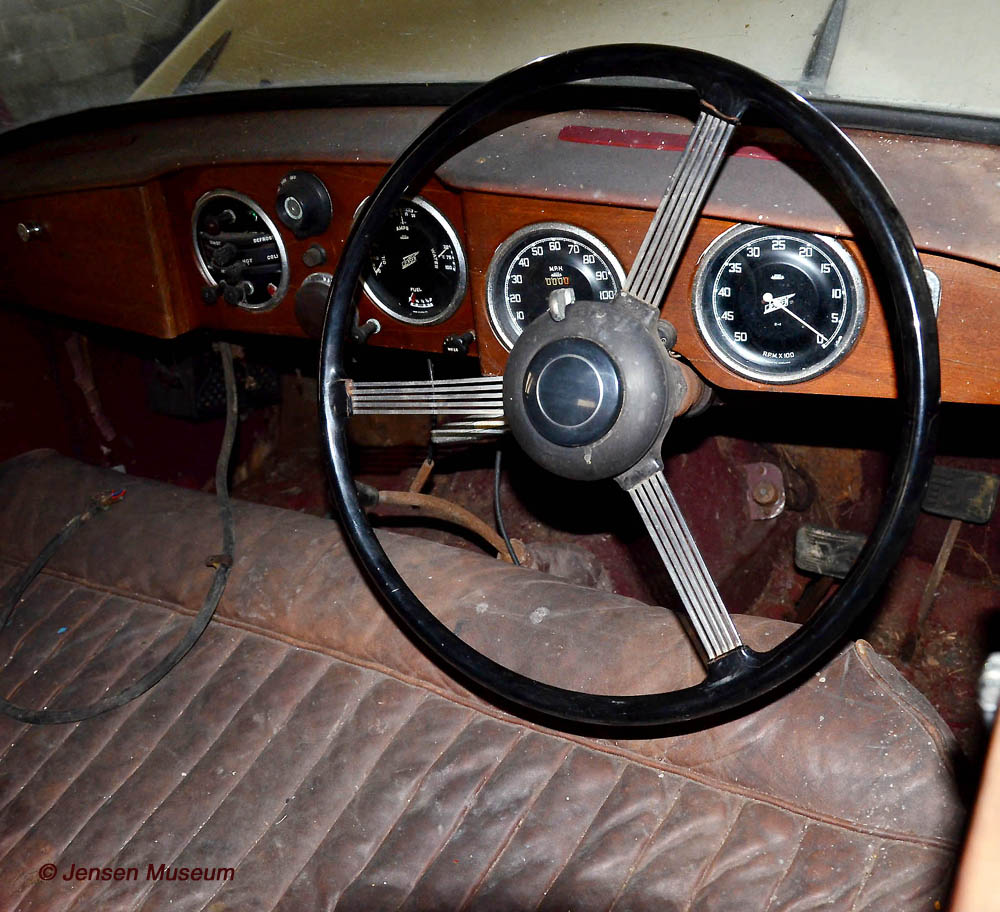 The focus of the Museum is always towards conservation rather than restoration. Interceptor Deluxe chassis number 63 does require full restoration, and the bodywork will have to be removed during that process. It will be our intention to deal with the restoration as sympathetically as possible. Presently, the car remains on its original paint, although it may not be practical to keep that on the longer term. In the event we cannot keep the original paintwork, we shall look at cutting or removing a section of the original paint / panel-work to be archived.

Chassis / Body: The chassis remains solid along the centre, typically protected by oil splash. However, rust has taken hold on the outer point of the floor pans, and the sills. The boot floor has also suffered with rust. The aluminium bodywork, and fibreglass boot lid have survived in very good condition. There is very little oxidation present to the aluminium panels, and the panel-work still retains the original ivory paint from 1954. If this original paint can remain, will not be discussed until the bodywork is removed from the chassis.

Mechanics: During 2017, basic refurbishment to the engine was made to allow for evaluation. The engine fired up and retained good oil pressure. There was water seepage from the head to block. The radiator was also found to be leaking. 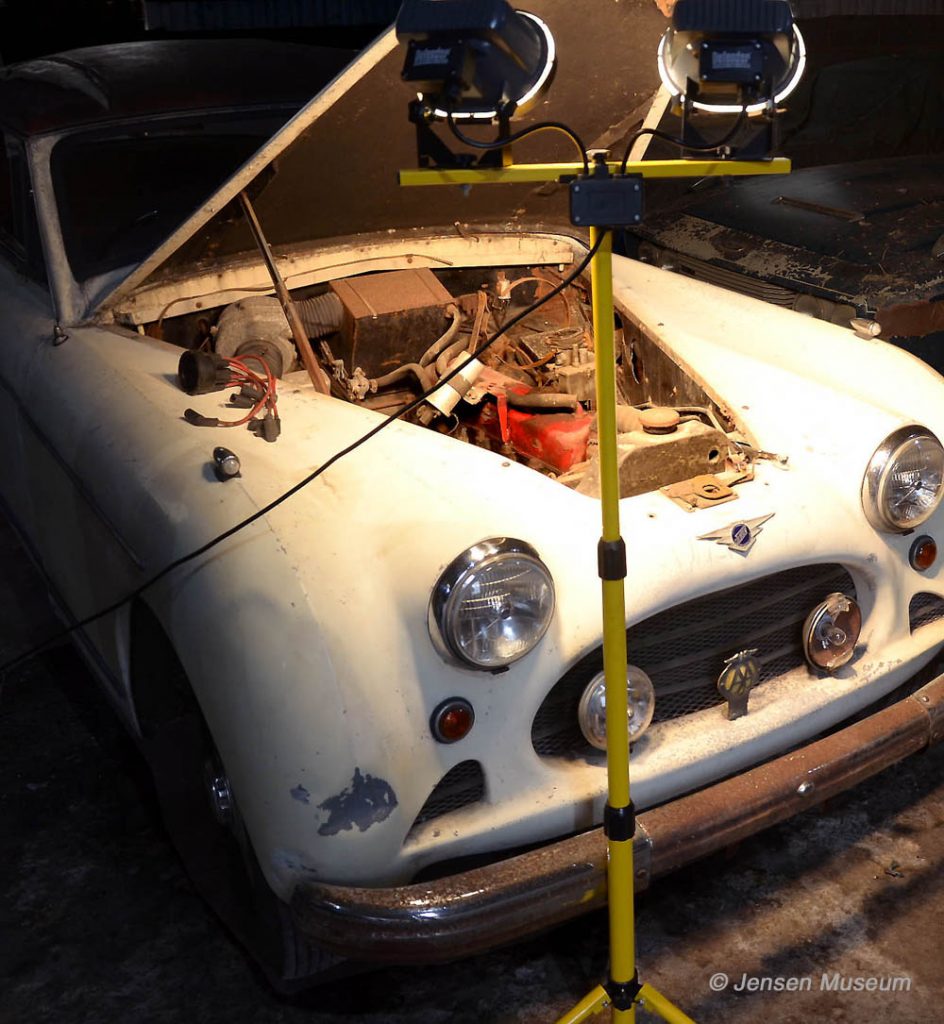 Evaluating the engine of LEA 629.

During 2018, the front body was removed (see https://www.jensenmuseum.org//1954-jensen-interceptor-front-body-removal/) to allow refurbishment of the radiator. The head was also removed and sent away for pressure checking, and overhaul. By November 2018, the refurbished radiator was installed, as was the overhauled head. The car is now in a running condition.

Interior: The red leather and vinyl trim can be cleaned, treated, and saved. The red carpets are in a very poor state. They will have to be replaced, and what can be saved of the originals, will be archived.

COPYRIGHTS: All images and text copyright of The Jensen Museum | Jensen Owners’ Club