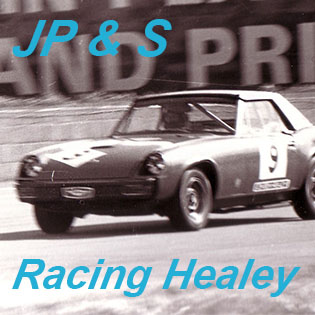 The year was 1977, the event was Mallory Park Race Course, near Nuneaton. On the starting grid, a blue painted race spec Jensen Healey, with former Jensen Motors Technical Representative, John Page, in crash helmet, behind the wheel. But, what had led up to this moment. The Museum looks at the history of Jensen Parts & Service’s motorsport venture.

When Jensen Motors finally closed the gates in 1976, some lucky employees were offered employment at Edmiston’s new company, Jensen Parts & Service. The Company opened its doors on 1st June 1976, virtually the day after the gates of Jensen Motors closed. 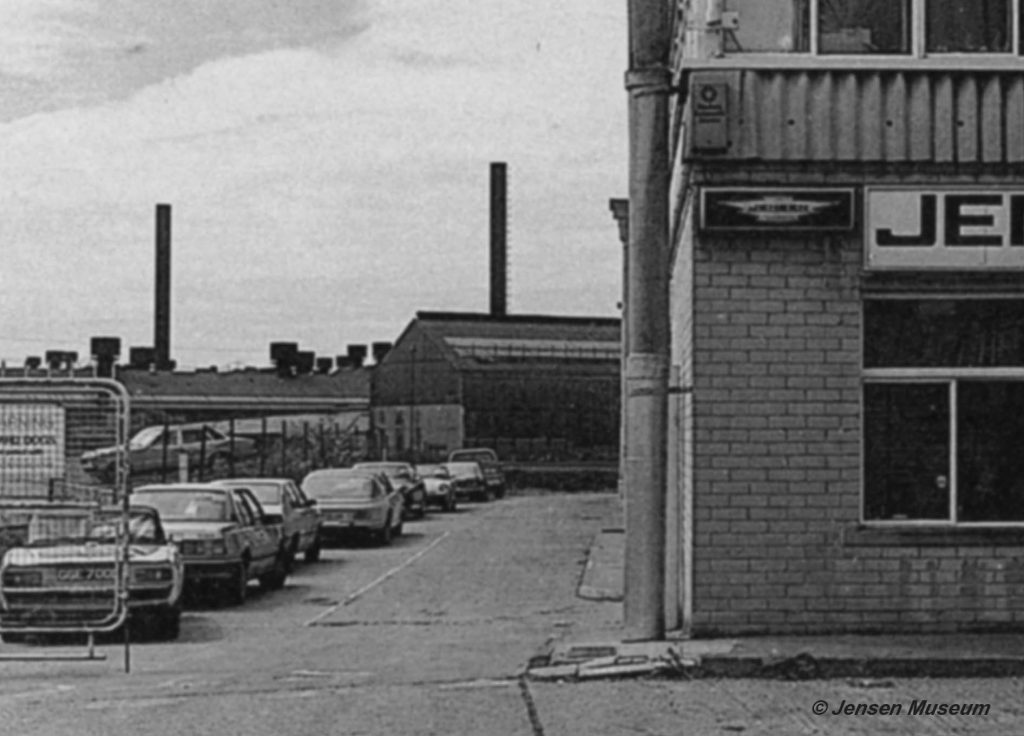 The Jensen Parts & Service building . This was the former Jensen Motors Service Department.

Jensen Parts & Service was situated on the doorstop of the old factory complex, in fact it had been the building used by the Service Department of Jensen Motors. Of the lucky employees offered jobs, four included, John Page, John Baker, John Laine, and Alan Skelton. All four, trusted mechanics working within the old Service Department of Jensen Motors.

Page picks up the story,

“Back in the 1970s, myself and John Baker used to go to all the motor racing events. John had a caravan, and we would often go the event and stay in the caravan. It wasn’t long before two other mechanics wanted to join us, so along came Alan Skelton, and John Laine.

One day we came up with the idea of getting a couple of the typists that we knew well enough, to do us some letters on Jensen Motors letter headings. It was completely unofficial, and looking back, a bit of a mad thing to do.

No doubt our heads would have rolled if we had been caught out. John B [Baker] and myself managed to get the addresses for all the heads of the different race meets, and race teams.

So, vaguely putting it across that we were involved in an official Jensen Motors race team , the letters would try and blag free entry tickets, and anything else we could get.

Sometimes it would lead to all sorts of memorabilia being sent to us, such as posters, race event stickers, badges, and even on occasion, signed photographs of racing drivers. To be fair, who wouldn’t believe such letters, all properly typed on full Jensen Motors letter headings. 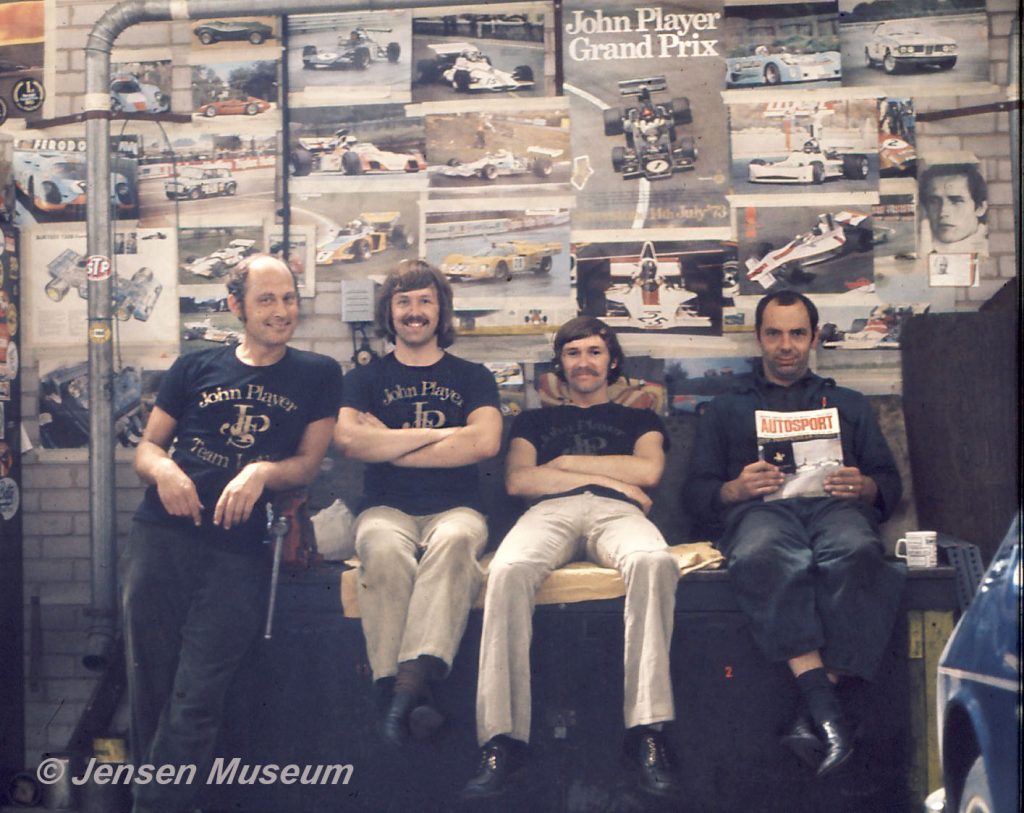 From left to right: John “Bakes” Baker, John Laine, Alan “Ally Skelt” Skelton, John Page. The photograph was taken at the Jensen factory in October 1973. Some of the ‘Fantastic Four’s race memorabilia can be seen pasted up on the wall behind them.

I remember both Silverstone, and John Player Special in particular sending us all sorts of things. In fact JP & S even sent us a batch of their team JP & S tea-shirts in black with gold screen printing – we were all immensely proud of those.”

As Jensen Motors was coming to the end of its day in the first half of 1976, Bob Edmiston, the then Company Secretary, asked some of the remaining staff, including John Page and John Baker if they would stay after work and help to take stuff over to what would become Jensen Parts & Service.

His idea was to get as much as was possible over to the Service Department (which was to become Jensen Parts & Service), before the auction in August, and the clear down and closing of the gates.

Page, Baker and the others would take anything that might be needed to keep the new company going, including large numbers of crates, and boxes of parts.

Amongst the multitude of items they moved, there was also two Jensen Healey body shells to be moved across. These were just basic unbuilt shells, and hadn’t even got to the stage of having chassis numbers attached to them.

It seems the shells wouldn’t be missed by the liquidators, and as such were fair game. At the Service Department, which was  swiftly filling up, the two shells were left in a corner.

With a moderately smooth transition, Edmiston had Jensen Parts & Service ready to open directly after the gates of Jensen Motors were closed.

With Jensen Parts & Service not long opened for business, Page and Baker’s thoughts moved back to motorsport. The two Healey shells hadn’t been lost on them. There had been a history of Jensen Healeys being used in motorsport. 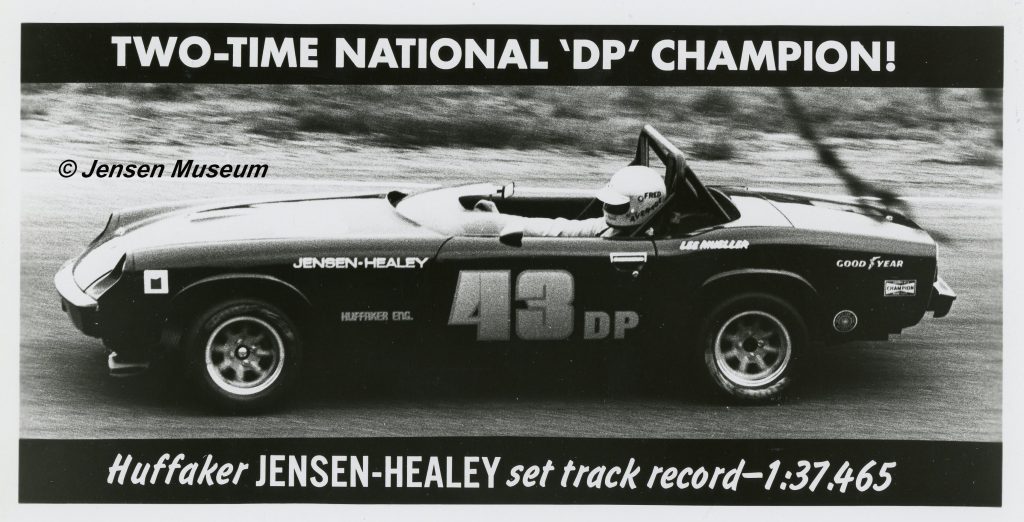 Remembering back to the Scottish Jensen distributors, Jenscot, racing a Healey, and obviously, the trophy winning Huffaker racing Jensen Healeys in the USA  –   Page and Baker wondered if they could do something similar. Both John laine, and Alan Skelton were also keen to be involved. 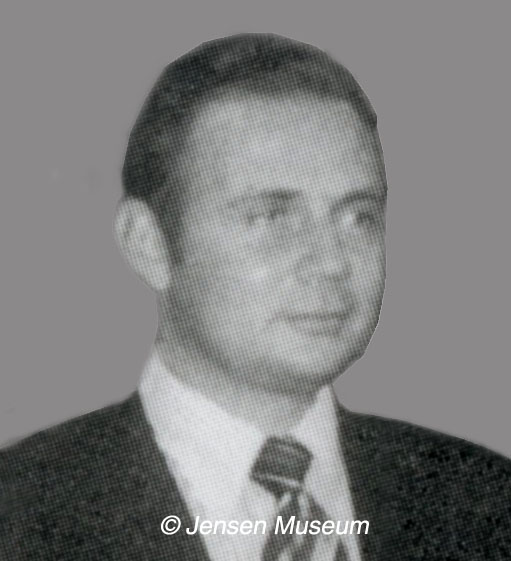 The two men approached the subject to Edmiston , asking if he would entertain them turning one of the Healey shells into a race prepared car sponsored by Jensen Parts & Service.

Edmiston wasn’t prepared to go that far, but did throw out an offer to them.  He countered that they could have one of the shells, and they could have any parts they needed to complete the build.

However, all the labour would need to be done in their own time.

It was an acceptable compromise. Page believes the canny Edmiston wanted to see how well they did under their own steam, and thinks that if they had started to win races, he would have sponsored the team properly.

And so, one of the shells was built up. Page continues the story,

“Here we were again, the Fantastic Four, me, John B [Baker], Aly Skelts  [Alan Skelton], and John L [Laine]. The build was pretty straight forward.

There was no carpet (obviously), so the Jensen Healey was sprayed blue throughout, and a roll bar fitted. The class we intended to race in was for standard un-modified cars. As such the engine remained standard.

We did fit a five speed Getrag transmission, and from memory, the only upgrades we were allowed, were uprated springs, and brake pads. The completed car wasn’t built  for use on the road, and we never gave it a chassis number.” 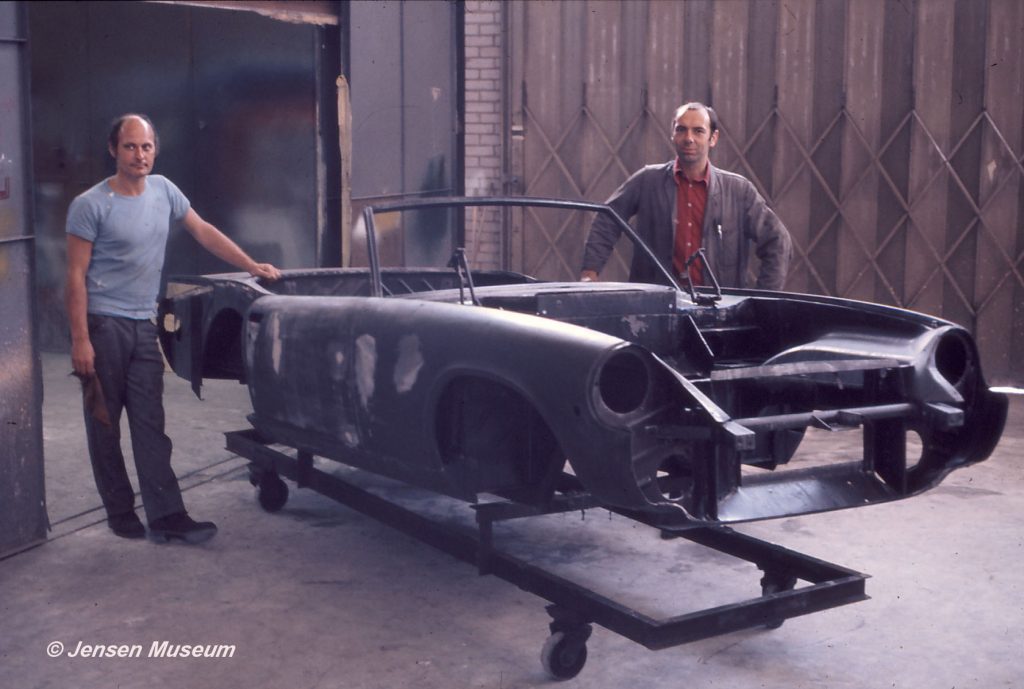 During late 1976, the ‘Fantastic Four’ made a start on the Jensen Healey body shell. Left John Baker, to the right, John Page. 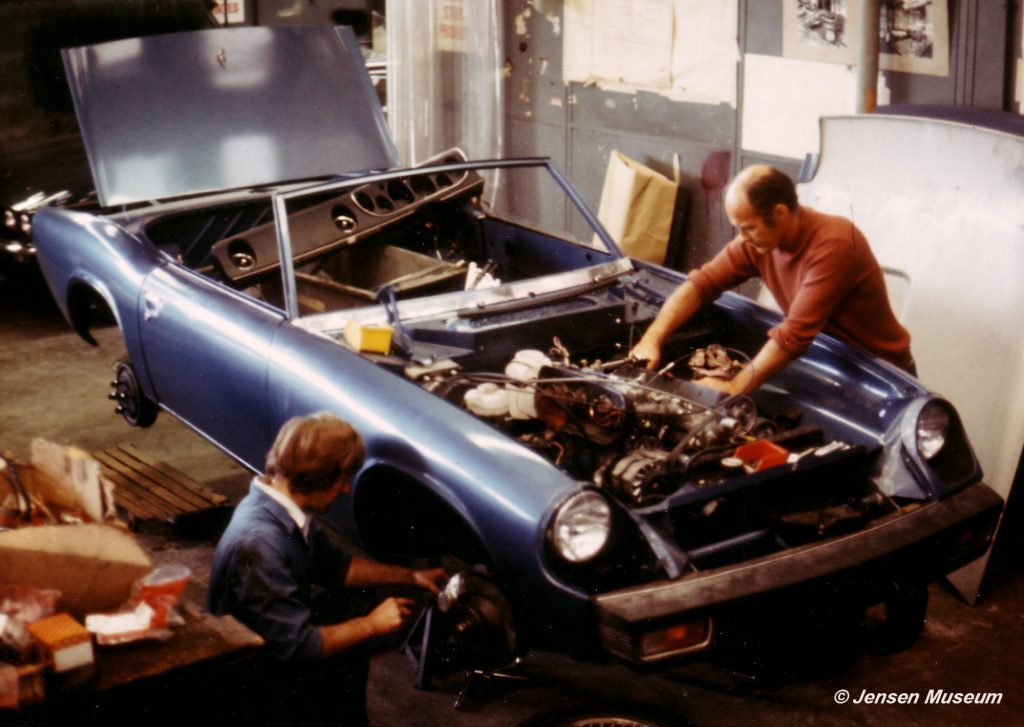 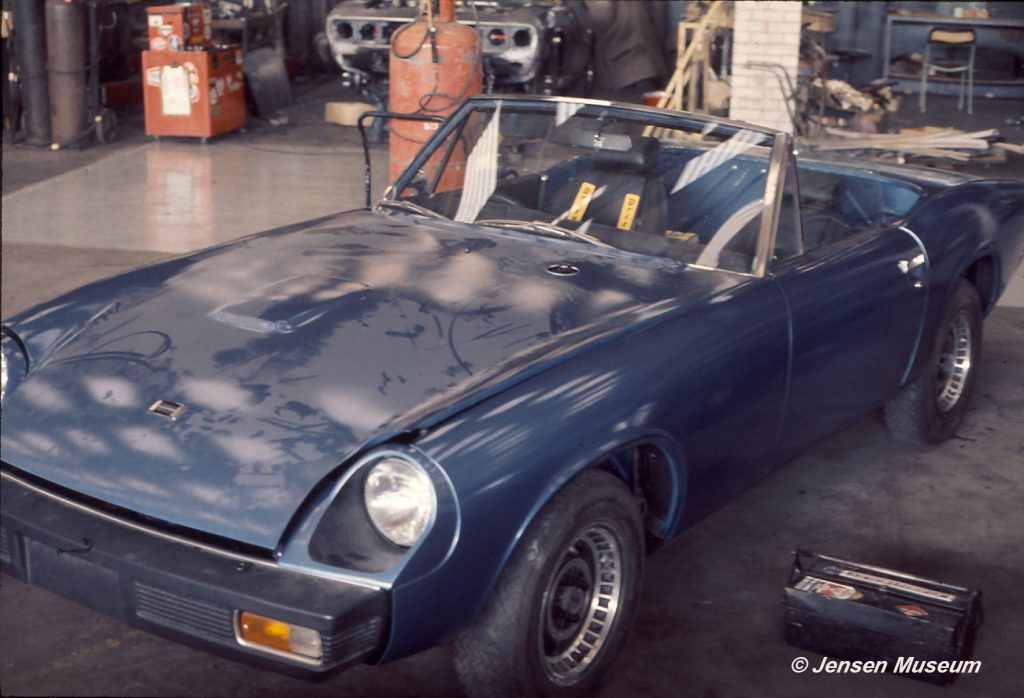 The painted shell coming together. Next step to fit the interior roll cage. 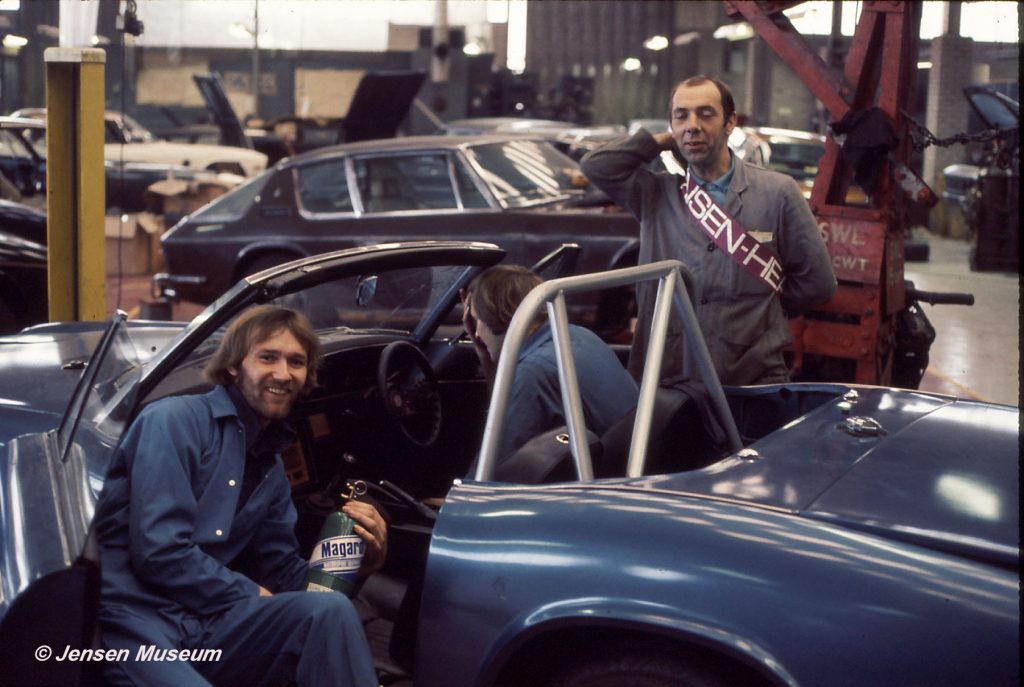 Nearly ready for the car’s first race. Alan Skelton kneeling by the passenger seat, fire extinguisher in hand. John Laine in the driving seat, and John Page wearing a Jensen Healey sash to commemorate the completion of the car.

Once completed, the team were ready for the 1977 racing season, and they had booked their first race day at Mallory Park. They took the Jensen Healey to Mallory Park using the works van, along with the  works trailer (with Edmiston making it clear all fuel was at their expense). 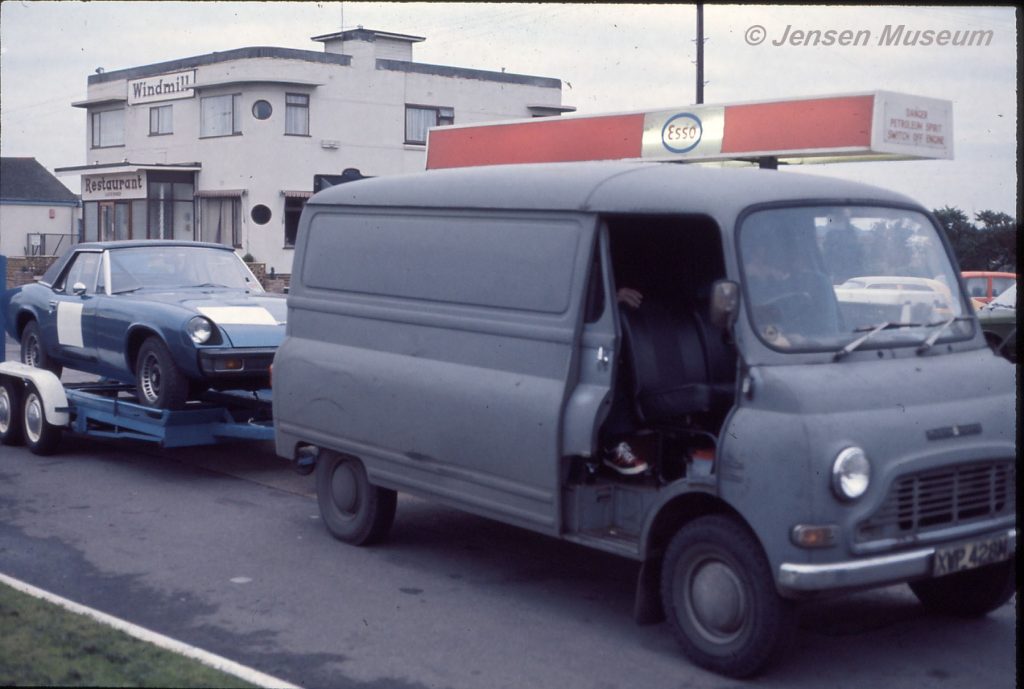 En route for Mallory Park. The Jensen Healey on the trailer along with the works van. 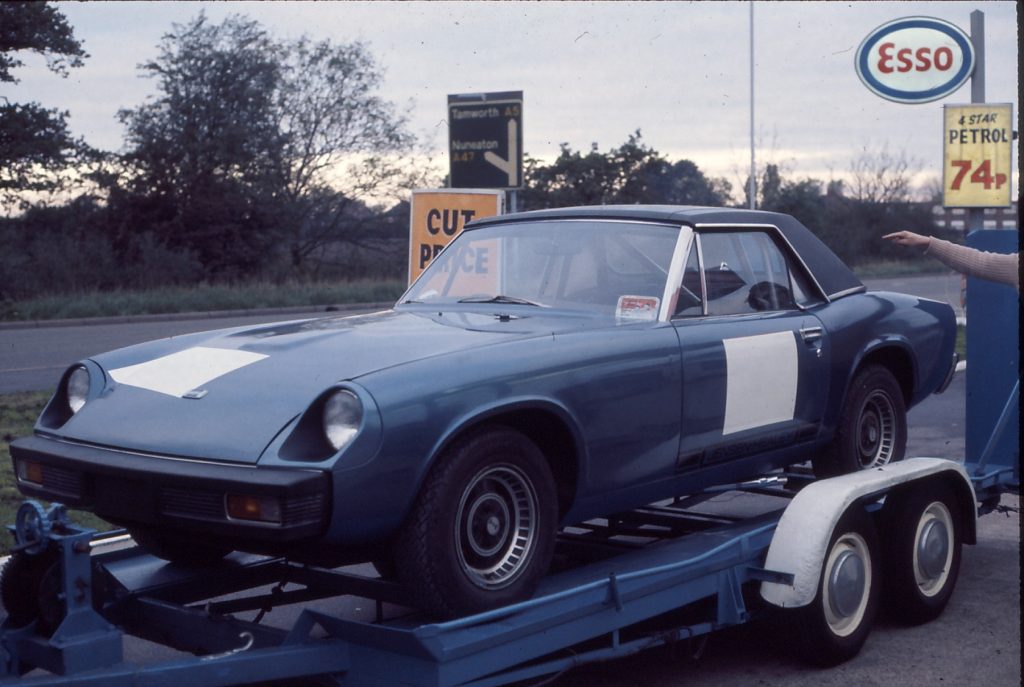 The Jensen Healey looking ready for its first race. 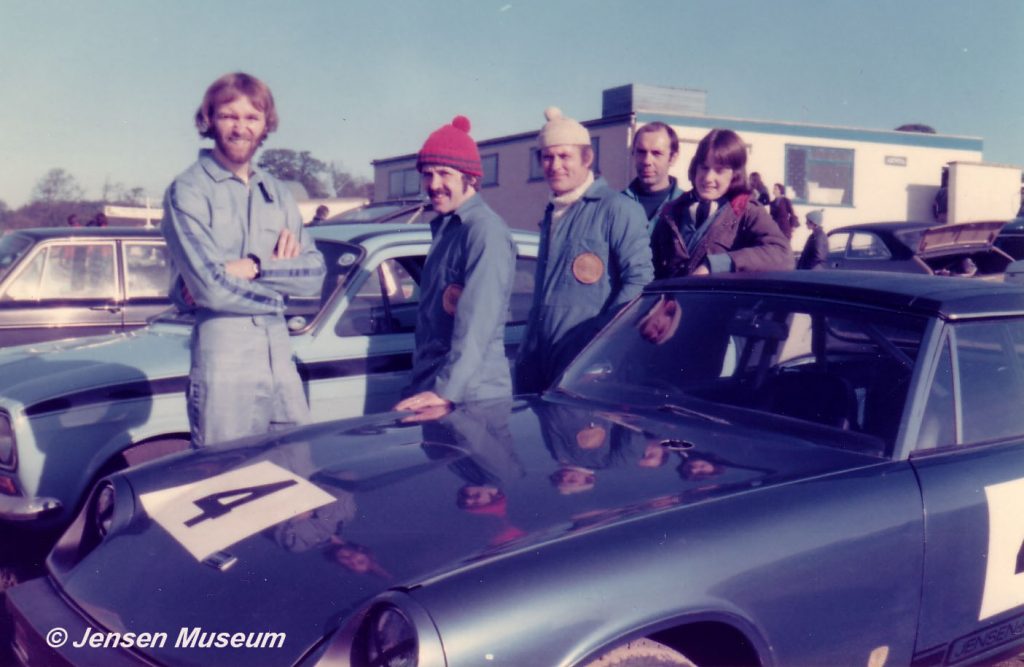 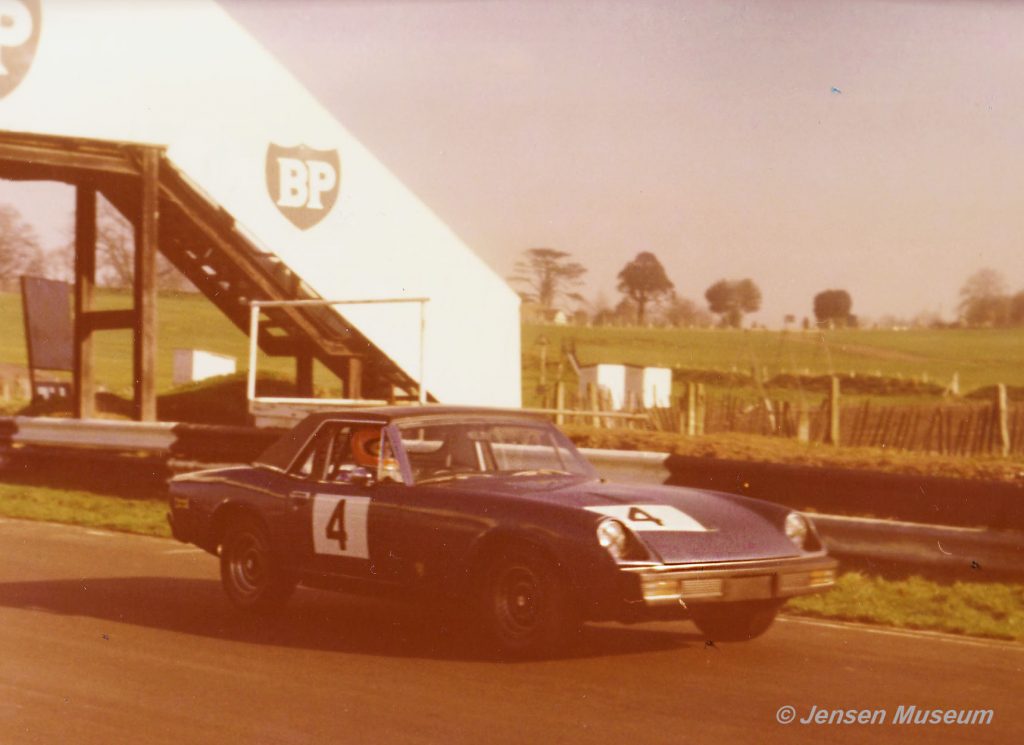 John Page behind the wheel on the first race at Mallory Park. 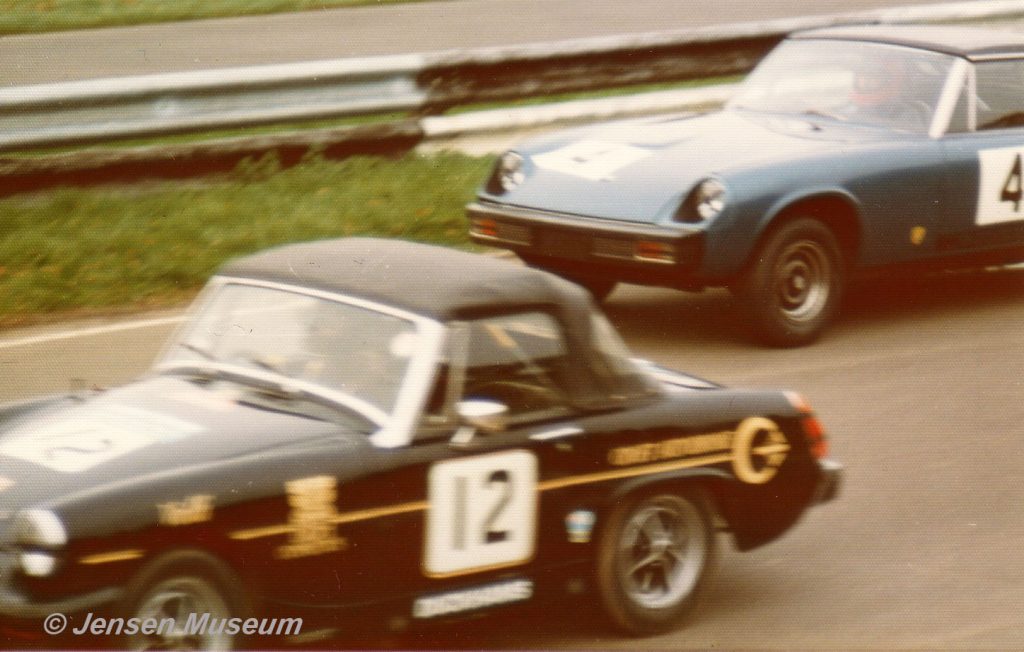 Page about to overtake a Midget at Mallory Park.

Page picks the story up again,

“I’m not sure how it came about, but I  ended up  being the first driver. Once on the track, I did about ten laps, taking it as fast as I could. Unfortunately, I lost the car on one of the bends and crashed the Jensen Healey.

The car was pretty badly bashed about when we loaded it back onto the trailer, and made the journey back to Kelvin way with our tails between our legs. Luckily, some of the panel beaters said they would stay after work and straighten the car back out.” 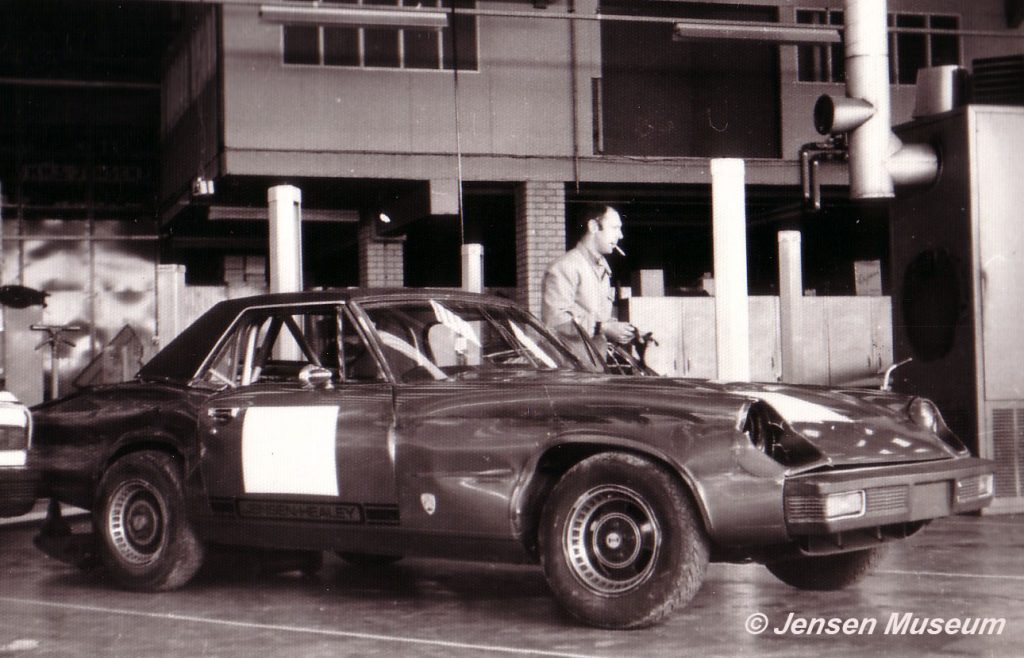 The crashed Healey back at Jensen Parts & Service. 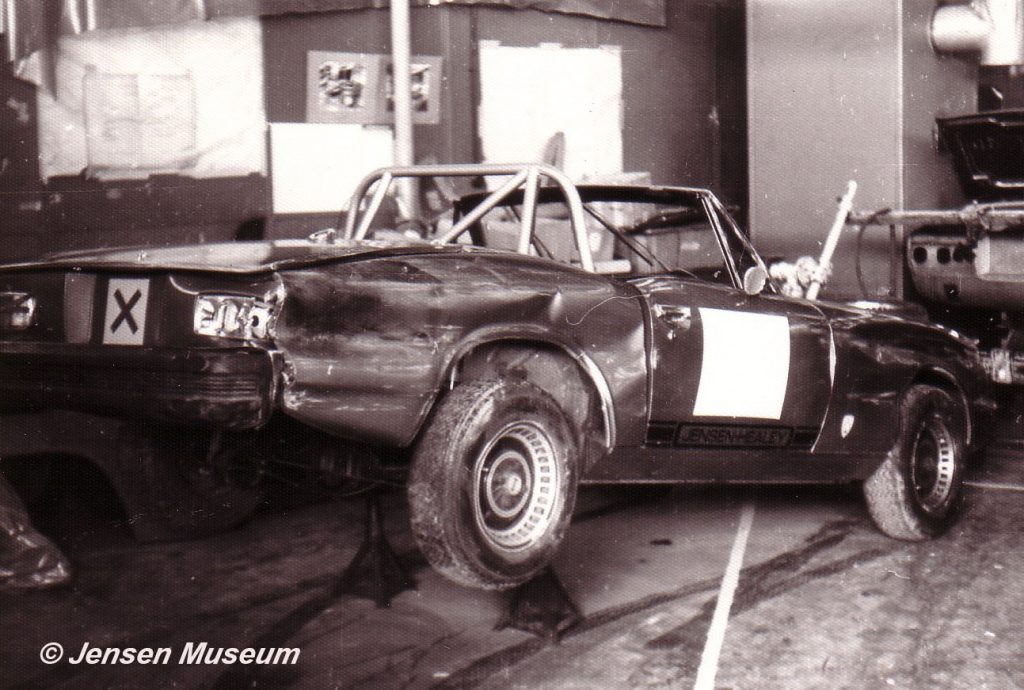 A view showing the damage to the rear-end. The black ‘X’ within the white square is a Provisional Race sticker, for participants that are novices.

Once the car was completed,  other races took place at Cadwell Park, Oulton Park, and Silverstone. Over to Page to tell us more,

“Alan Skelton ended up racing the car. Over the course of the various race events, I think Alan achieved a third in one of the races. There was one major issue with using the Jensen Healey in circuit racing, and that was the fact that the standard engine didn’t have a dry sump. As such we suffered from oil surge. 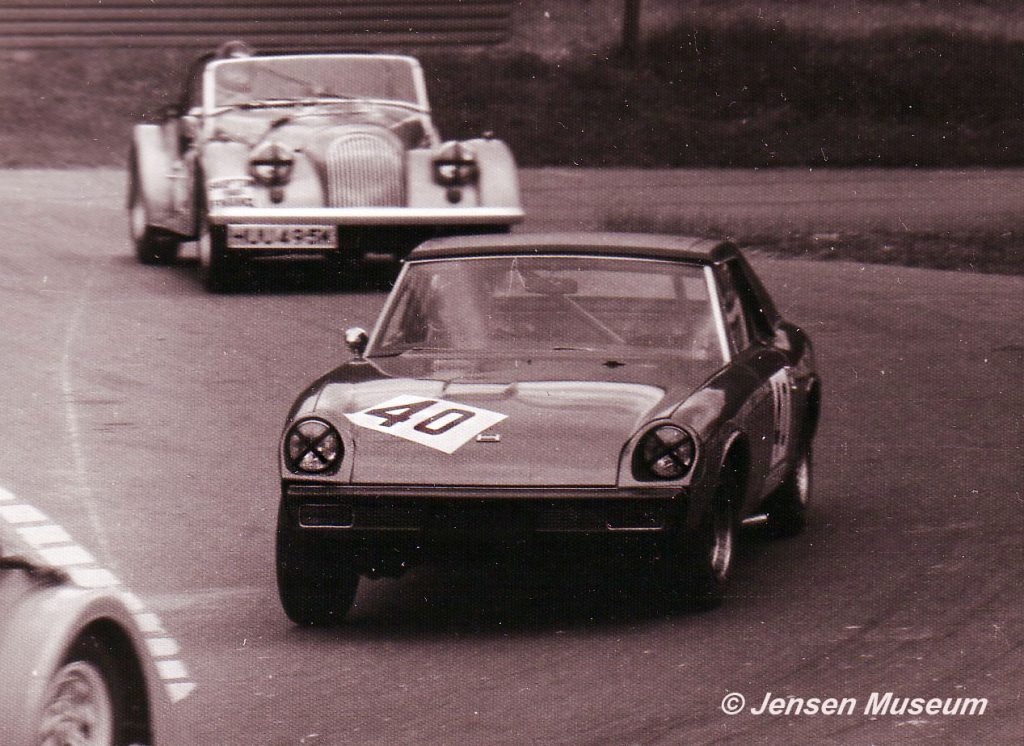 Skelton behind the wheel at Cadwell Park 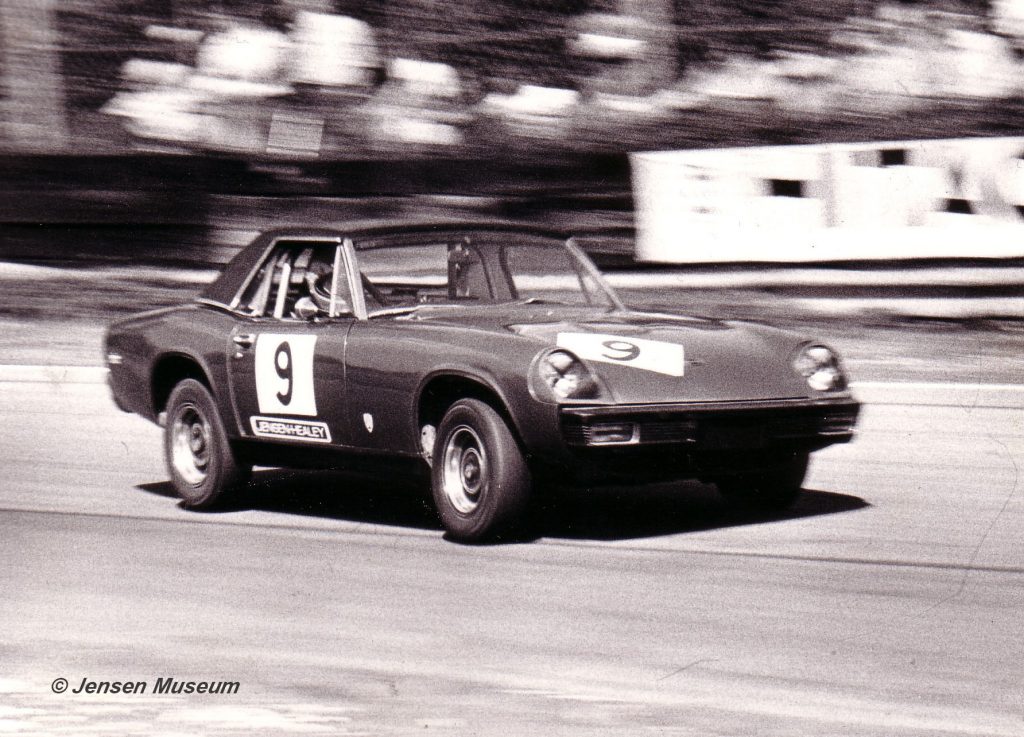 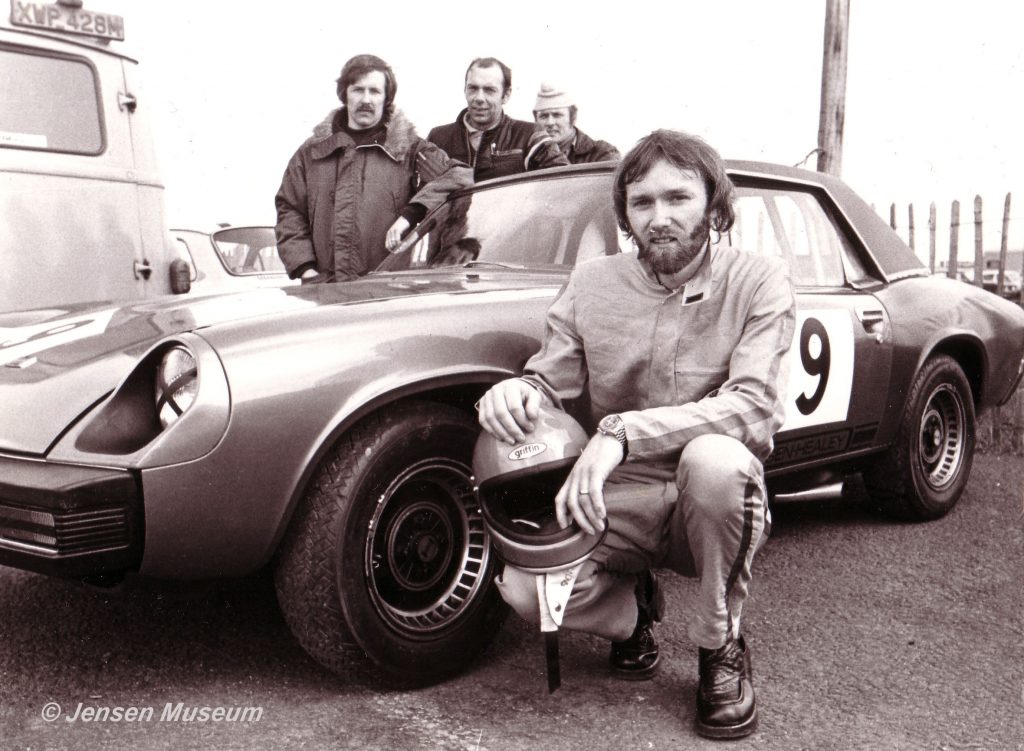 The ‘Fantastic Four’ at Silverstone 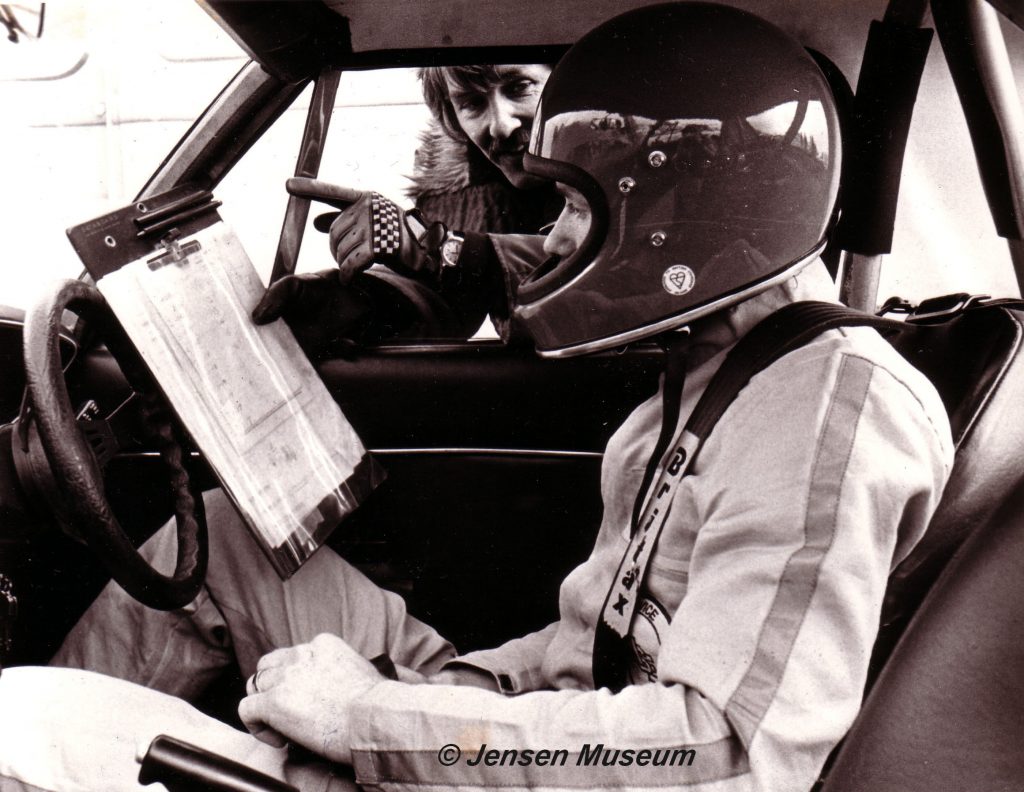 Skelton going through the ropes just before the race at Silverstone. John Laine with Grand Prix gloves. 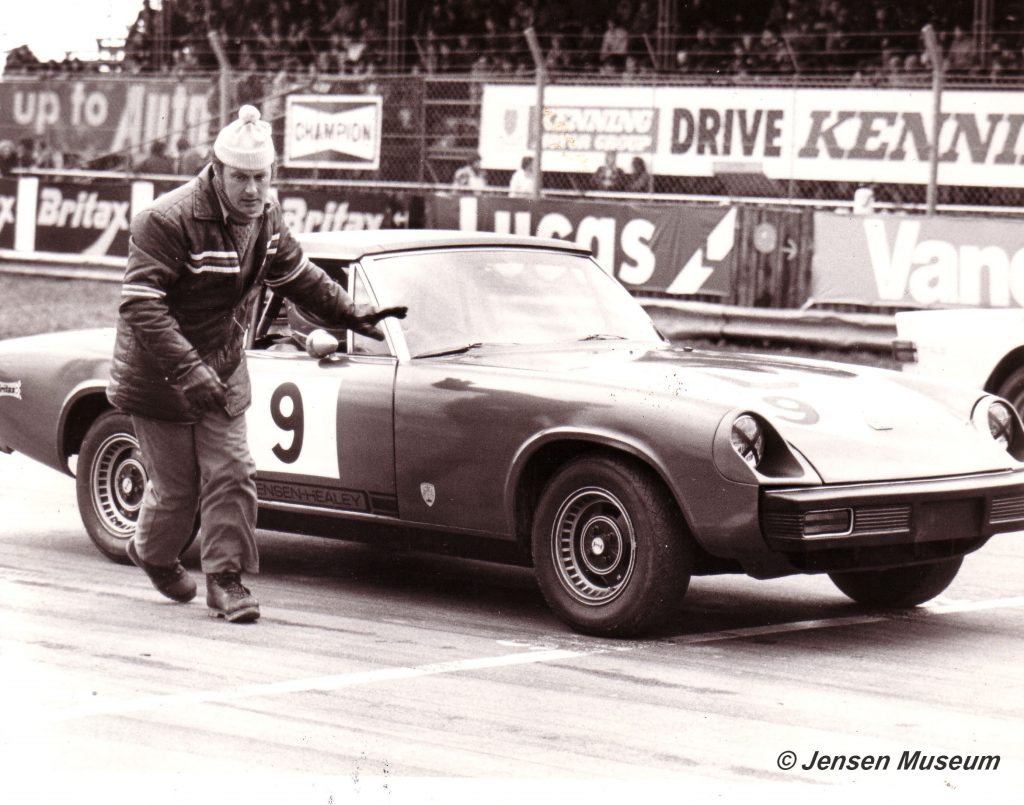 Great action photograph with John Baker running off track after last minute chat with Skelton at the starting line.

Certainly cars on the track such as Morgans and TR6 seemed to outshine us. With just a third place in our first season, and Edmiston obviously not going to be impressed, our move into the world of motorsport ended.

We only did one season with the car, and at the end of the season, the car was parked up at the back of Jensen Parts & Service. Sometime later, someone showed an interest in the Racing Jensen Healey , and Bob Edmiston sold it to them.

We never did get to find out who bought the car, or whatever happened to it after it sold. “

If anyone knows who purchased the JP & S racing Healey, and what happened to it subsequently, the Museum would love to know.