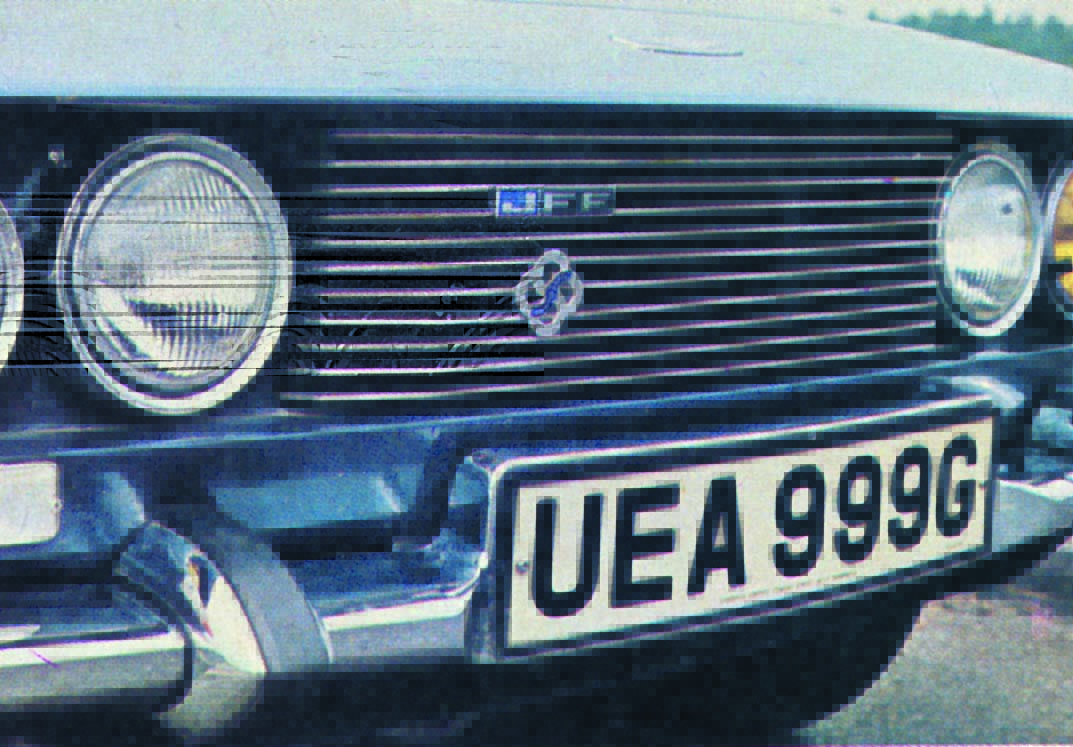 Unique badging for the new four-wheel-drive Jensen FF, started off almost as an afterthought on the CV8 FF. Just a simple chromed ‘FF’ badge identified the ground breaking car. It was with the launch of the Italian styled FF in 1966, that Jensen Motors ( helped by some pushing behind the scenes from Harry Ferguson Research)  looked towards badging, as a means to promote their new flagship model. 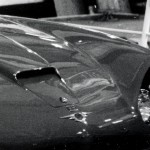 The CV8 FF bonnet, with simple ‘FF’ chromed badge positioned between the bonnet opening flap, and the winged badge. 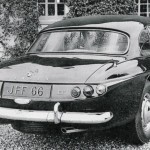 The ‘FF’ badge positioning to the rear of the CV8 FF.

Badging the CV8 FF was somewhat of an after thought, but a distinction from the basic two-wheel-drive CV8 was required for the impending motor show of 1965.

A simple ‘FF’ badge was manufactured in chromed metal. At the rear of the car, the typical CV8 ‘JENSEN’ letters appeared on the edge of the boot lid, and the same CV8 chromed metal badge was placed to the left-hand-side next to the light cluster. To the right-hand-side was the new chromed metal ‘FF’ badge instead of the MK.III badge. As with the car’s two-wheel-drive counterpart, the chrome and red enamel winged Jensen Motors badge was affixed to the centre of the bumper.

The ‘FF’ badge was also placed to the front of the car, sitting rather incongruously at the base of the bonnet lid, with the chrome and red enamel winged Jensen Motors badge directly below this. 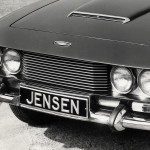 119/001 fresh from Italy, and at that stage with no badging to the front grille. 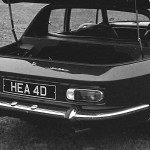 119/001 tailgate photographed by Michael Cooper in 1966. The chromed ‘FF’ badge was addded below the Jensen name later.

When initially transported to West Bromwich from Italy in , 119/001 had the following badge layout.

To the rear of the car, a new chromed metal badge with a stylised Jensen name (this same badge would continue to be carried on all Jensen Interceptor and FF models).

At this stage there was not an additional ‘FF’ badge located directly below the ‘Jensen’ badge. To each side of the car, the same chrome metal stylised ‘Jensen’ name was attached to the rear quarter panels, fitted to a crafted indent to the panel.

On the 1st September 1966, Harry Ferguson Research Ltd sent a new chrome ‘FF’ (Ferguson Formula) badge to Jensen Motors Ltd, requesting that it be fitted to both sides of every Jensen FF car from that time.

This chrome ‘FF’ badge was fitted to the rear panel of 119/001 just under the existing Jensen badge for evaluation purposes and was fitted to all subsequent FF cars. However, it was decided not to fit the new badge to the side panels instead of the Jensen name badges, HFR did not pressure the point further at that time. 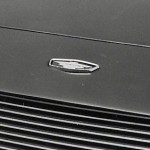 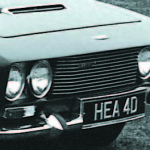 To the front of the car, a chrome and blue enamel Jensen badge. This badge fitted by Vignale, had a small chrome metal edge strip around the badge. Even before the car had seen any use, this chromed edge strip was starting to come loose, and Jensen Motors decided to have the edge strip removed from this, and future cars. At the point of delivery to Jensen Motors, there were no badges fitted to the front grille. It is possible that the new ‘JFF’ badge had not been finished in time to send out to Vignale, as within a month of the car being delivered to Jensen Motors, the new ‘JFF’ badge had been fitted to the upper left-hand upper side of the grille. The new badge in chromed metal had the ‘J’ within a black enamel square, and the ‘FF’ on blue. 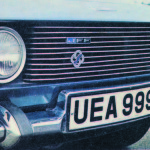 The new Ferguson Formula chrome & enamel badge mounted to the front grille under the ‘JFF’ badge. 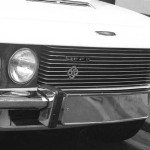 To the rear of the car, a chromed metal Jensen badge, along with the ‘FF’ badge directly underneath (as per MK.I FF cars). To each side of the car, the same chrome metal stylised ‘Jensen’ name was fitted to the vented section of the rear quarter panels.

To the front of the car, a chrome and blue enamel Jensen badge. To the grille, Jensen Motors manufactured a new chromed and enamel ‘JFF II’ badge. Immediately below the ‘JFF’ badge was the Ferguson Formula ‘Cloverleaf’. 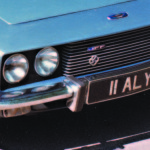 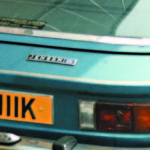 A new rear badge was created for the MK.III FF, using an Interceptor III badge with a blue panel instead of red.

To each side of the car, the same chrome metal stylised ‘Jensen’ name was fitted to the vented section of the rear quarter panels.

To the front of the car, a chrome and blue enamel Jensen badge. To the grille, Jensen Motors returned to the ‘JFF’ badge carried on MK.I cars. This is probably because they knew the FF was being axed, and didn’t want the expence of creating a brand new ‘JFF III’ grille badge. Immediately below the ‘JFF’ badge was the Ferguson Formula ‘Cloverleaf’.