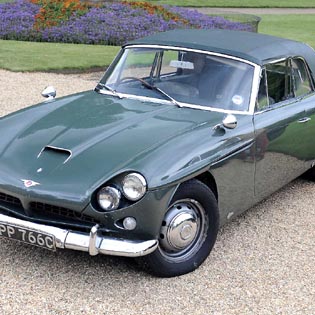 Just one Jensen CV8 Convertible was manufactured by Jensen Motors. The original idea for a CV8 Convertible coming from Richard and Alan Jensen. Once completed, the car was sold to Lord Carrington. This unique car survives today. The Museum looks at the history of JM-EXP-108.

The chassis for the CV8 Convertible, given the experimental number, JM-EXP-108, was based on that of the MK.II. Although the standard MK.II chassis needed to be lengthened by nine inches.

Initial work started in summer of 1964, but the project wasn’t without issues, and at one stage in September 1964, work temporarily stopped and the experimental Convertible side-lined.

Work restarted, after discussions about how the car should be finished took place with Pat Follett and other distributors. All of whom seemed keen on a production CV8 Convertible. By June 1965, the prototype CV8 Convertible was completed. The finished car had a specification of smoke green paint with grey leather trim and hood. 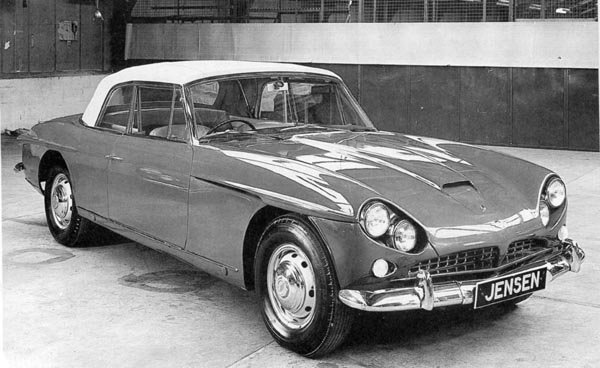 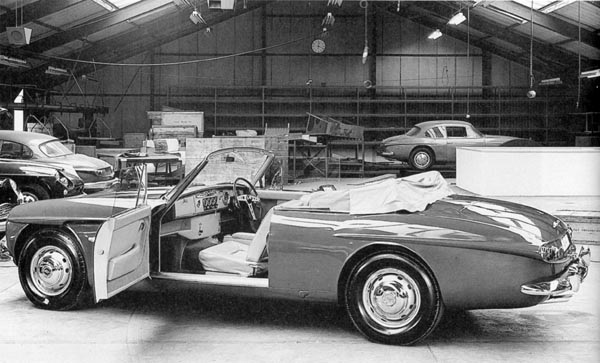 JM-EXP-108 photographed at the Jensen factory in 1965. The grey leather dash can be clearly seen. The rear windows wound directly into the rear quarters.

Although the car had started life with a converted MK.II chassis, it did end up being bodied and finished with many of the new MK.III nuances. The CV8 MK.III would be treated to Burr Walnut instead of the Formica finish of MK.IIs, however, Chief Engineer & Designer, Eric Neale, made the decision to finish the dash in matching grey leather. His reasoning being the grey leather would be far less reflective on an open top car such as the CV8 Convertible. Lord Carrington would later have that changed to Burr Walnut. Other specifics for the Convertible was wind down windows to the rear. 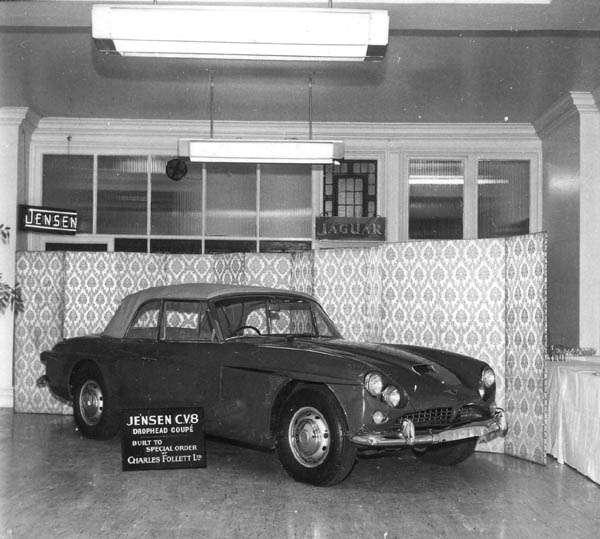 The CV8 Convertible on display at Charles Follett’s London showrooms, just before its purchase by Lord Carrington.

The completed car was purchased into stock by the London-based Jensen distributors, Charles Follett.

Foreign Secretary of the time, Lord Carrington, was excited by the unique Jensen CV8 Convertible, and agreed to purchase the car. Bearing Carrington’s private registration number, XYU 7, the prototype Convertible was put to the test by its new owner.  Collecting the car from Charles Follett in a thunderstorm started the first issue with the car. The hood was leaking badly.

Outside of complaints of excessive leaks to the hood (and in particular, the hood stitching, which Carrington stated was porous and allowing water seepage), there was also a large number of smaller niggling faults.

Back at the factory, work commenced to improve the overall quality of the hood. Eventually they managed to cure most of the leaks, although under fierce water testing a couple of very small leaks were identified, which seemed awkward to cure.

With work completed, Deputy Chief Engineer, Kevin Beattie, was asked to test-drive JM-EXP-108, and to give his thoughts on the CV8 Convertible as an ongoing project. He found numerous issues with the car, including torsional weakness, chassis oscillation, exhaust boom, strong understeer, and a feeling of general sloppiness in the way the car drove.

In conclusion, Beattie stated that much more development work would be required before a CV8 Convertible could be put into production. To put such a car into production in its current form would lead (in his opinion) to a high level of customer complaint.

With other projects on the agenda, such as the four-wheel-drive Jensen FF, and; perhaps more pertinently; the P66 Convertible, the CV8 Convertible project was shelved.

Meanwhile the prototype CV8 Convertible went back to its owner. Various issues continued to raise their head. Such as the fitting of the MK.III braking system (JM-EXP-108 had the MK.II type braking system fitted to the car).

Lord Carrington had felt his car should have the new brake system fitted free of charge. By November, the car had been involved a small accident, with some damage to the left-hand side rear wing.

While this damage was being repaired, Carrington asked that the entire car be resprayed. As with the braking system, he was expecting this free of charge, due to a few cracks that had developed in the paintwork.

In addition, the matter of the hood was brought up again. As with the braking system, and respray, Carrington felt a new hood should be fitted free of charge.

A series of letters went backwards and forwards between Jensen Motors and Charles Follett.  The CV8 chassis file documents doesn’t seem to show the outcome, and although the brakes were changed, and the paintwork damage completed, there isn’t confirmation of a new hood being fitted. However, at some point in the car’s life, the hood was changed, and the colour of the hood material changed from grey to green. It is quite possible Lord Carrington got his way in the end, and a new hood was put on during his ownership.

Time had in any event moved on, and Lord Carrington was taken by the new Italian styled Jensen Interceptor. Despite the faults with the prototype CV8 Convertible, Lord Carrington placed an order with Charles Follett, and received one of the first Interceptors – Chassis number 115/2509

By February 1967, Lord Carrington had taken ownership of his Interceptor, and meanwhile, the CV8 convertible had been given back to Chares Follett in part-exchange. His private registration, XYU 7 had been removed (ready to go on to the Interceptor), and LPP 766C assigned.

The  CV8 Convertible would find a new owner immediately.  Phillip Southall from Rednall in Birmingham, had a passion for open-air motoring. He had heard about the unique CV8 Convertible in late 1964 when it was mentioned in The Financial Times.

Unfortunately Southall left it to late before contacting the factory about the car, and by the time he did, the car had already been sold. Contacting Jensen’s Sales Manager, Jim Branson, Southall learnt that the car had been sold to Lord Carrington. Then contacting Charles Follett, Southall mentioned as and when the car came up for sale again, he would be prepared to purchase it immediately. 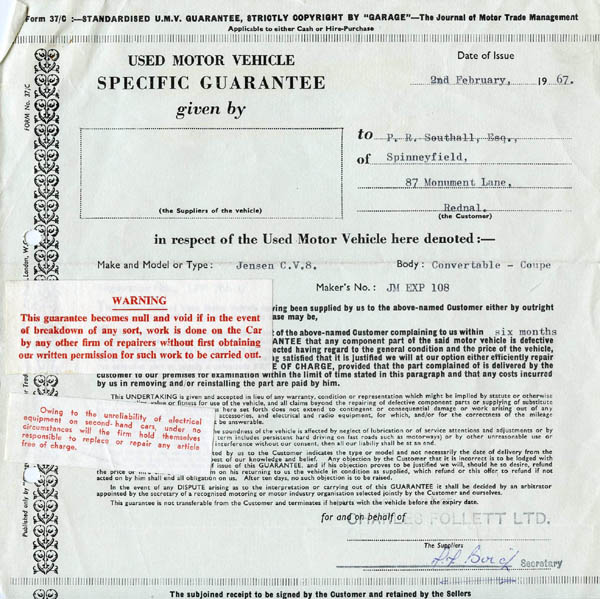 The Charles Follett guarantee for the CV8 Convertible, when sold to Southall.

Southall’s patience paid off, and in 1967 he was contacted by Charles Follett, to say the car had just been part-exchanged in against a new Interceptor. Southall agreed to buy the CV8 Convertible straight away, selling his Aston Martin DB2/4 Convertible in the process. Southall’s new Jensen had covered just over 21,000 miles, and the new owner wanted Jensen Motors to undertake various service and rectification work before he started driving the car. 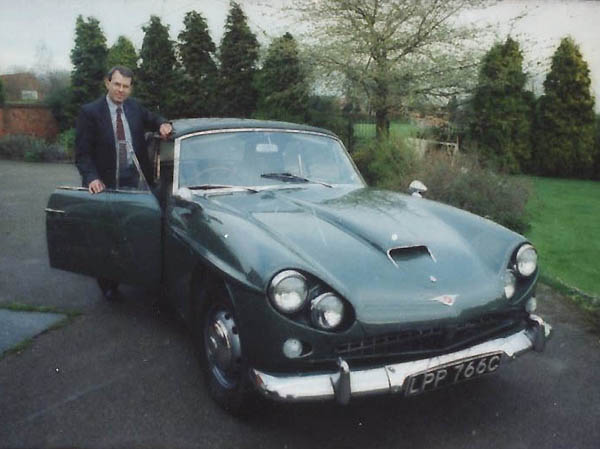 Southall was certainly enthusiastic about his purchase, and outside of general service work didn’t seem to have the range of problems found by Lord Carrington.

In December 1970, Southall was involved in an accident to the right-hand rear of his car. Transported back to the Jensen factory, the damaged car was repaired. The repaired car was returned to Southall in February 1971.

The CV8 Convertible remained his daily transport up to 1973, by which time spiralling petrol costs, forced Southall to keep the car as an occasional driver. 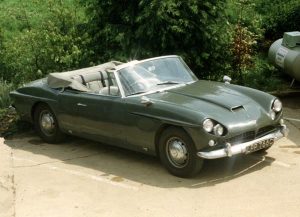 JM-EXP-108 photographed at Cropredy Bridge Garage in the 1980s, by then garage owner, Andrew Edwards. 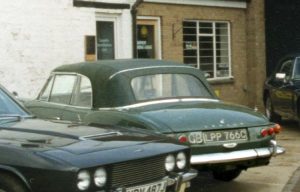 Another photograph of JM-EXP-108 showing the hood up. Again photographed in the 1980s by Andrew Edwards. 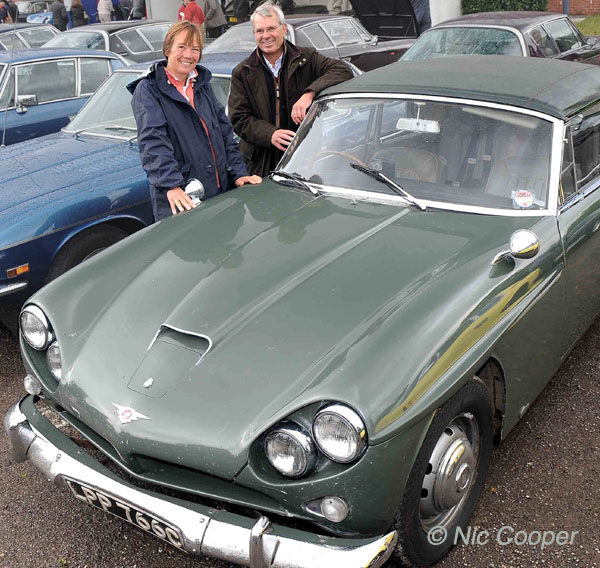 The Bryants photographed with their CV8 Convertible at a Jensen Owners’ Club meeting held in the 1990s. 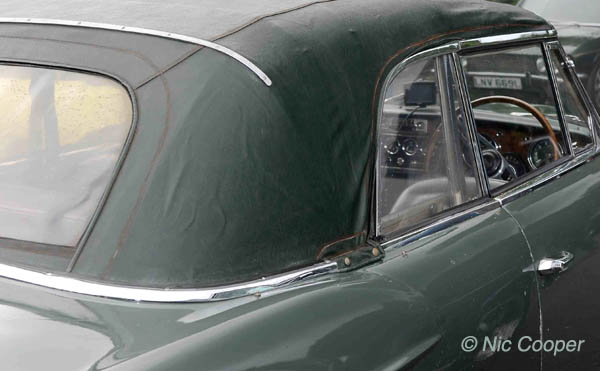 A detail photograph of the hood to the CV8 Convertible. 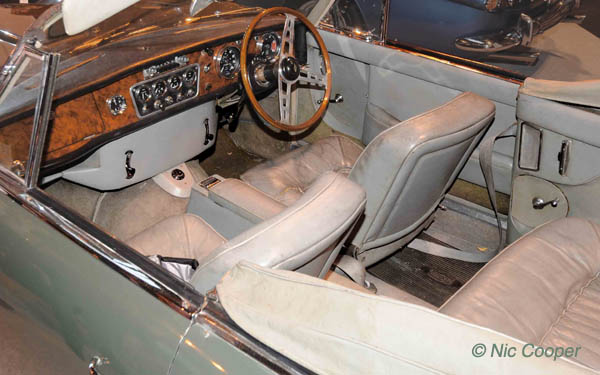 An interior view of the CV8 Convertible, photographed in the 1990s. 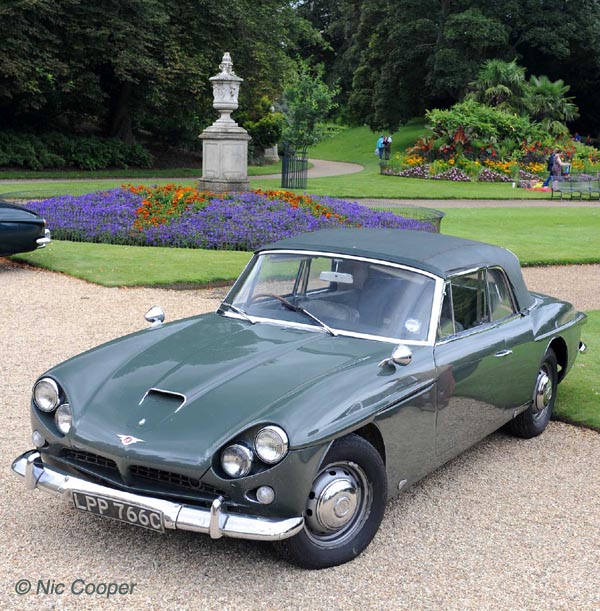 The CV8 Convertible at the CV8 50th Anniversary event, hosted by the Jensen Owners’ Club, at Waddesdon Manor, Buckinghamshire, in 2012.

Bryant owned the CV8 Convertible through until October 2017, at which time it was purchased by the London-based classic car company, Classic Automobiles London. During Bryant’s custodianship, he maintained the car sympathetically, keeping the car on its original smoke green paint, and with its original leather interior. The Museum hopes that any future custodian will resist the temptation to have the car resprayed or retrimmed.