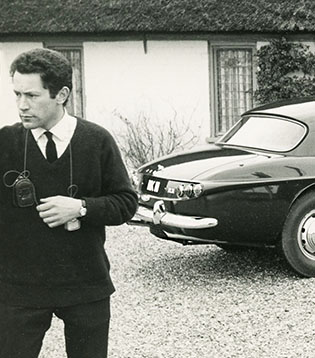 Amidst a backdrop of boardroom chaos, the 1965 Earl’s Court Motor Show was just over a couple of months away.

This was an important motor show for Jensen Motors, it would be the official launch of the ground-breaking four-wheel-drive Jensen FF. Then there was the launch of Eric Neale’s (less than ground breaking) ‘vision of the future’, the ‘Jensen Interceptor’, or P66 as it was  more  generally known as at the factory. Lastly, but by no means least, there was, what was to be the last of the CV8 series, the CV8 MK.III.

All of this going on, and the photography for the brochures, let alone the printing, hadn’t even been started. The fact was, the first CV8 MK.IIIs weren’t ready until July 1965, there was only one CV8-based FF (outside of a Development mule), and Development were still hard at work finishing that, and the same applied to the P66.

It was time to get the ball rolling. 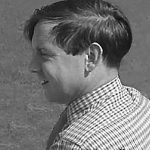 Within the Sales Department, Elliott Wishlade was Sales Promotion Manager, with Wyndham Powell as department head. Wishlade was generally used as the link between Good Relations (the publicity company behind Jensen Motors), and the factory.

It would probably have been him that made the call through to Good Relations director, Gethin Bradley, to arrange their photographer, Michael Cooper, to come up to the factory, and spend a day doing the brochure photography.

Although working for Good Relations, Cooper undertook virtually all the photography requests for Jensen Motors. That said, the CV8 brochure assignment would probably have been one of his first shoots  for the Company.

There would be three brochures required in time for the 1965 Motor Show, one for the P66 (Jensen Interceptor), one for the Jensen FF, and one for the CV8 MK.III. But work was still ongoing to both the P66 and the FF, so neither cars were going to be available for the photo-shoot.

The sales department already realised that with limited time left until the motor show, the only way forward with the P66 brochure, was to use artwork for the car, rather than a photo. And what about the Jensen FF.

This was another brochure problem. The only way forward, within the timescales, was to use a conventional CV8 for the main photo.

Both cars were parked outside the main factory doors, ready for Cooper’s arrival. Wishlade would be driving one car, while Cooper drove the other. 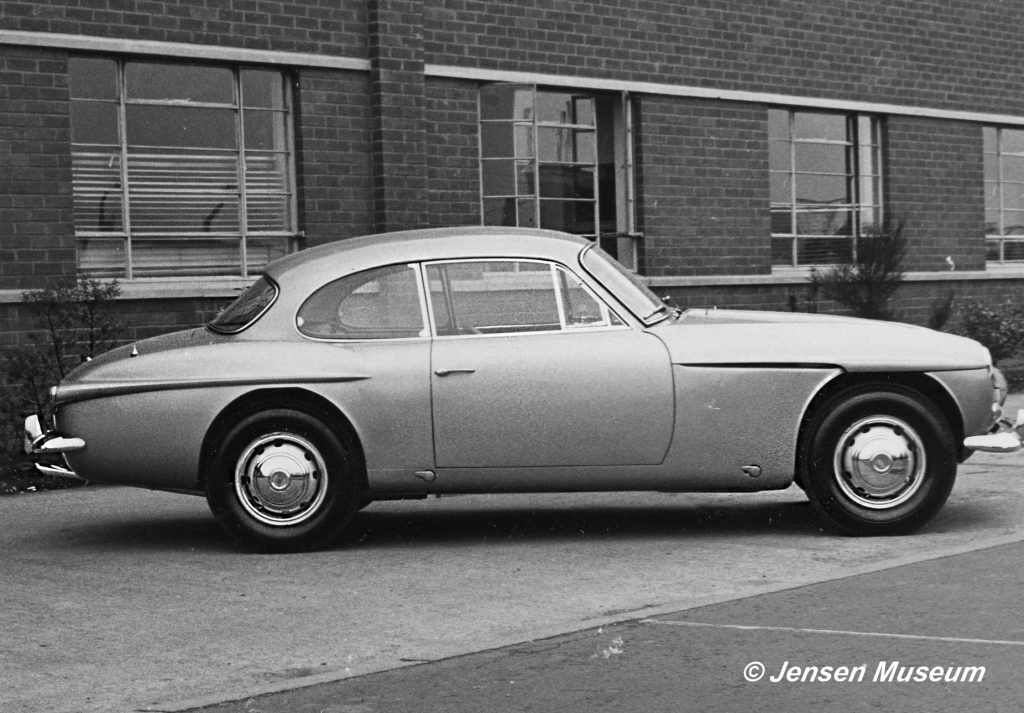 The location was a very English looking thatched cottage. The Museum hasn’t managed to find out the whereabouts of the cottage so far, but typically it wouldn’t be too far from the Jensen factory at West Bromwich.

Both CV8s were sporting their West Bromwich registered number plates starting ‘CEA’, but once at location the plates were removed, and so-called exhibition plates with ‘MK.III’ on, were put in their place for the photography. 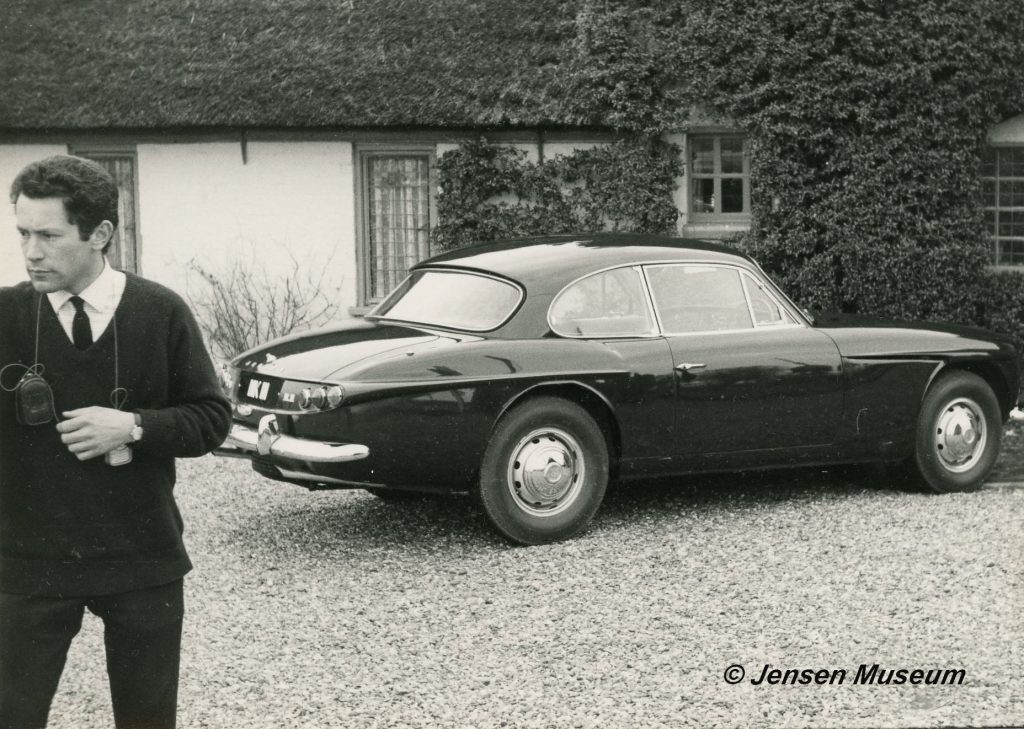 Michael Cooper with light meter around his neck, preparing for the photo-shoot. 112/2315 to the left of the photo with the MK.III exhibition plates in place. Wishlade took this candid photograph of Cooper. 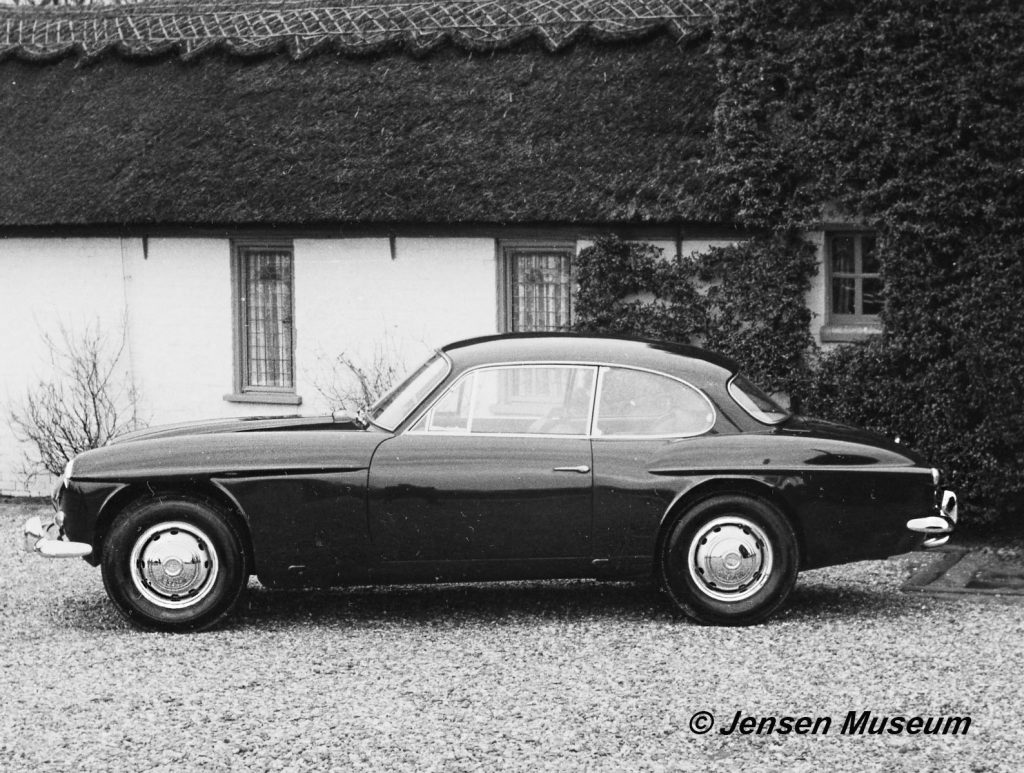 Another shot of 112/2315 photographed by Wishlade. 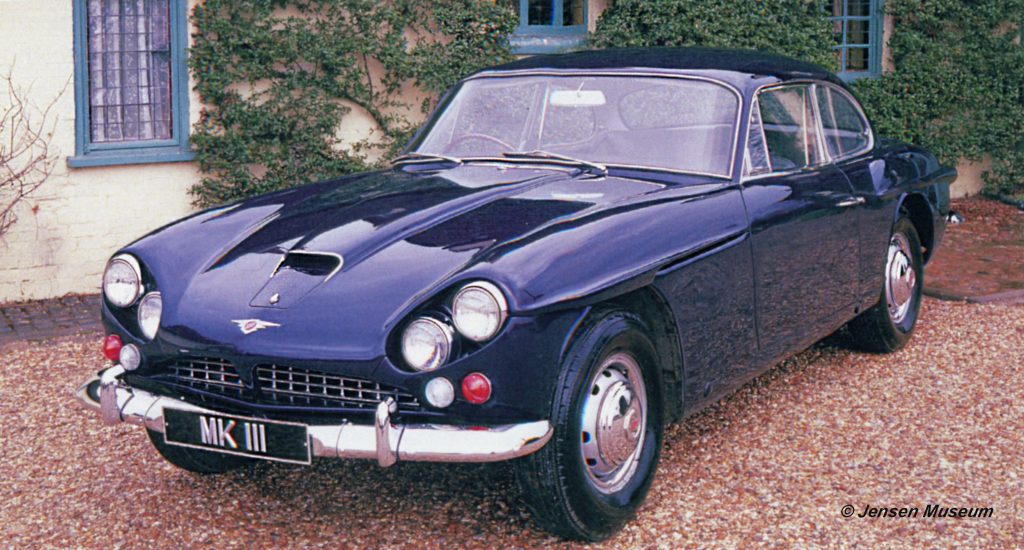 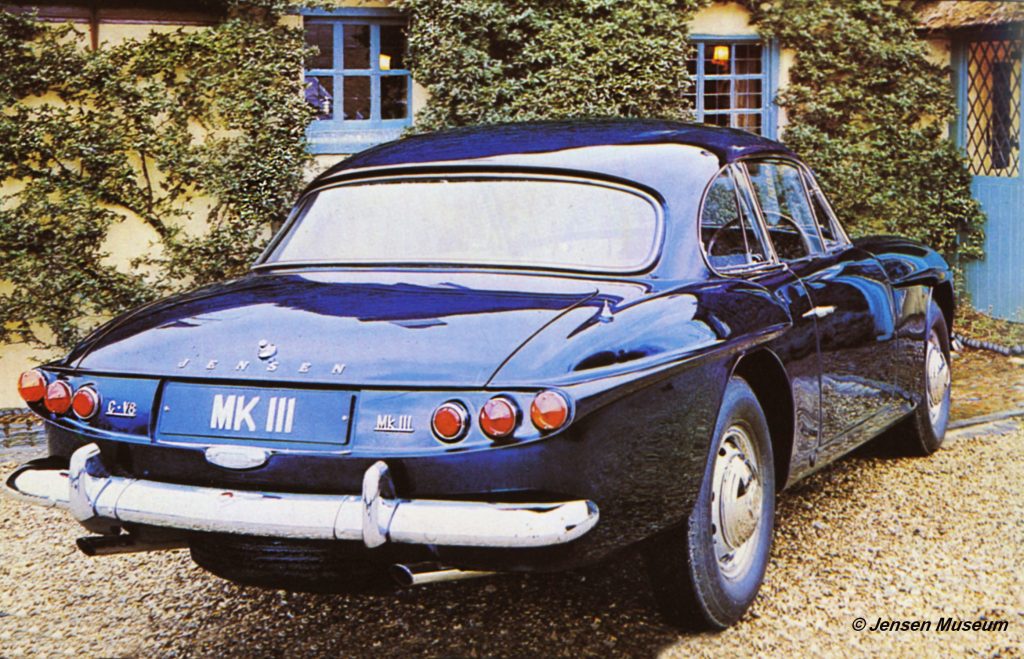 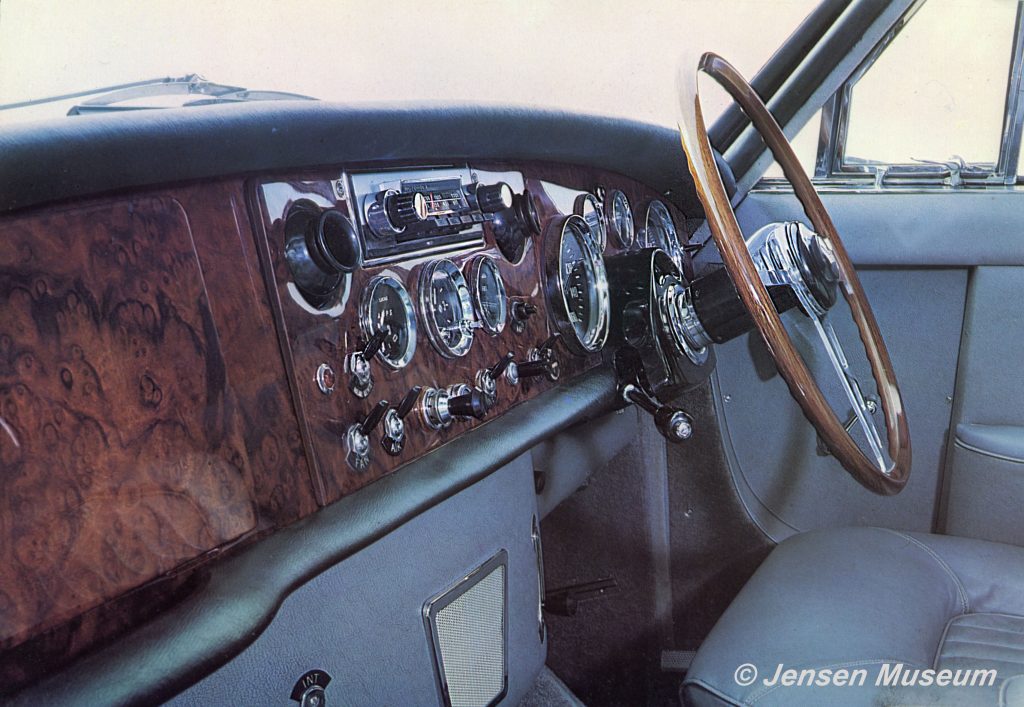 One of Cooper’s various interior shots of 112/2315. This was the interior image used for both the CV8 MK.III, and the Jensen FF brochures. 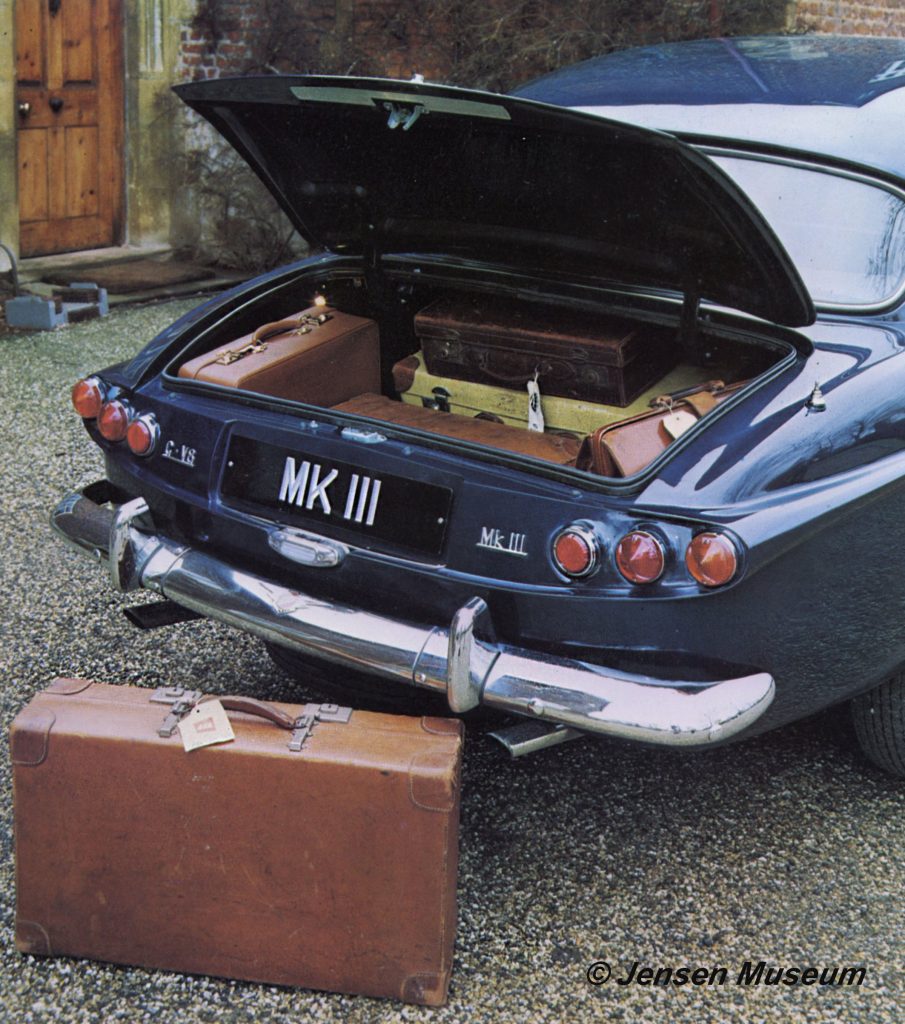 And with the boot already loaded full of luggage back at the factory, the photo-shoot was more or less ready to go. For this shot, Cooper takes out one of the large suitcases, to emphasis the capacity of the boot.

With the shoot completed, the two cars headed back to the factory. Cooper’s work was far from finished, after heading back to his home near Guildford in Surrey, the rolls of film needed to be developed as quickly as possible and sent up to the factory.

As well as getting brochures underway, there were other publicity issues which had to be dealt with sooner rather than later. For a start, Autocar wanted to have a feature about the new Jensen FF in their magazine, which would be coming out in-line with the October 1965 Motor Show, as indeed did Motor magazine.

Good Relations needed to get the relevant facts to them, along with some photographs / diagrams, which they could use. Once again, without having an actual Jensen FF to photograph, they would have to work with what Cooper photographed.

Both would need to convincingly retouched to make the car look like an FF. The retouched and finished images would be rushed over to both Autocar and Motor. The two completed features went out in October 1965 to link in with the Motor Show. 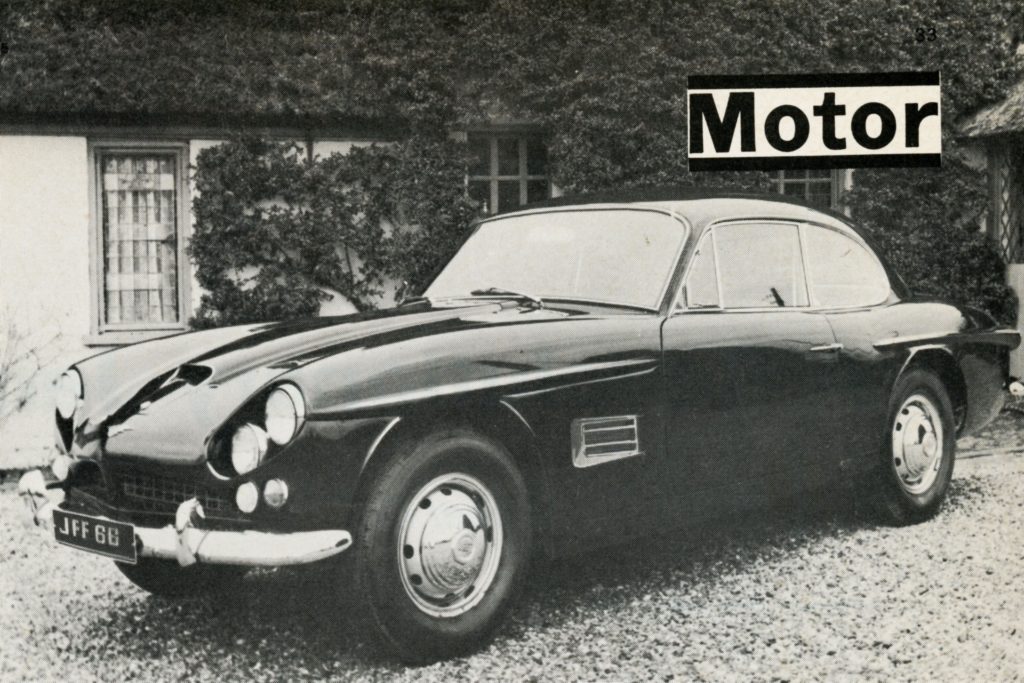 One of Cooper’s images taken from the front and suitably retouched to look like the CV8-based FF. This photo was used for the Motor feature of October 1965.

Although the shot taken from the rear of the CV8 MK.III wasn’t used for the main brochure, it was used by Good Relations for other purposes. Once suitably retouched, this become the basis for one of the FF publicity photographs. 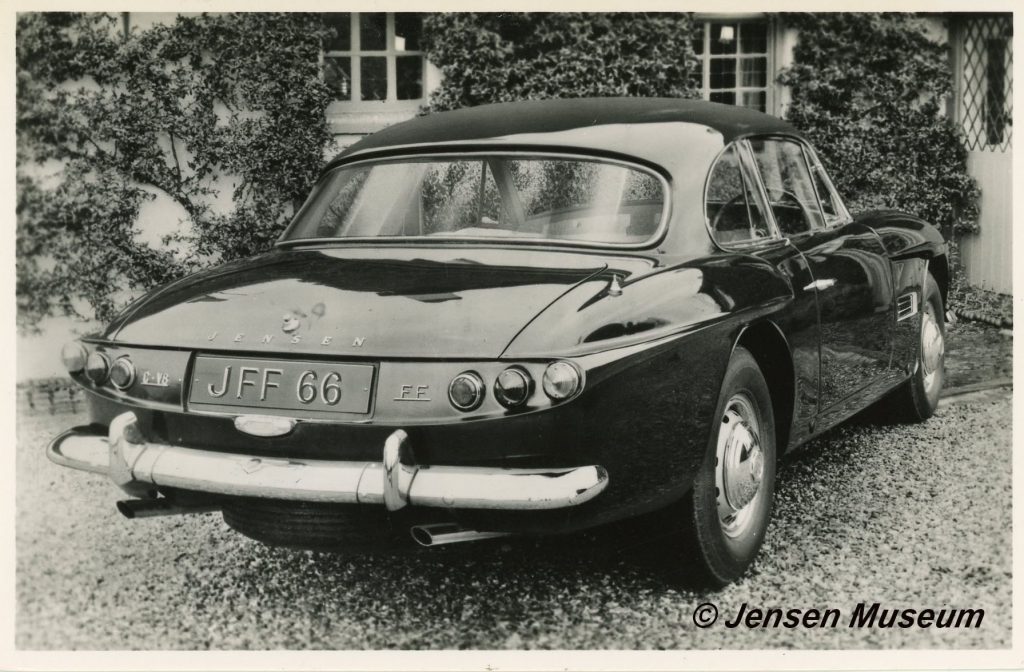 Cooper’s photograph showing the CV8 MK.III from the rear, suitably retouched. The photograph had a ‘JFF 66’ registration drawn in, an ‘FF’ rear badge to the right-hand side. The side grille was also painted in very convincingly. 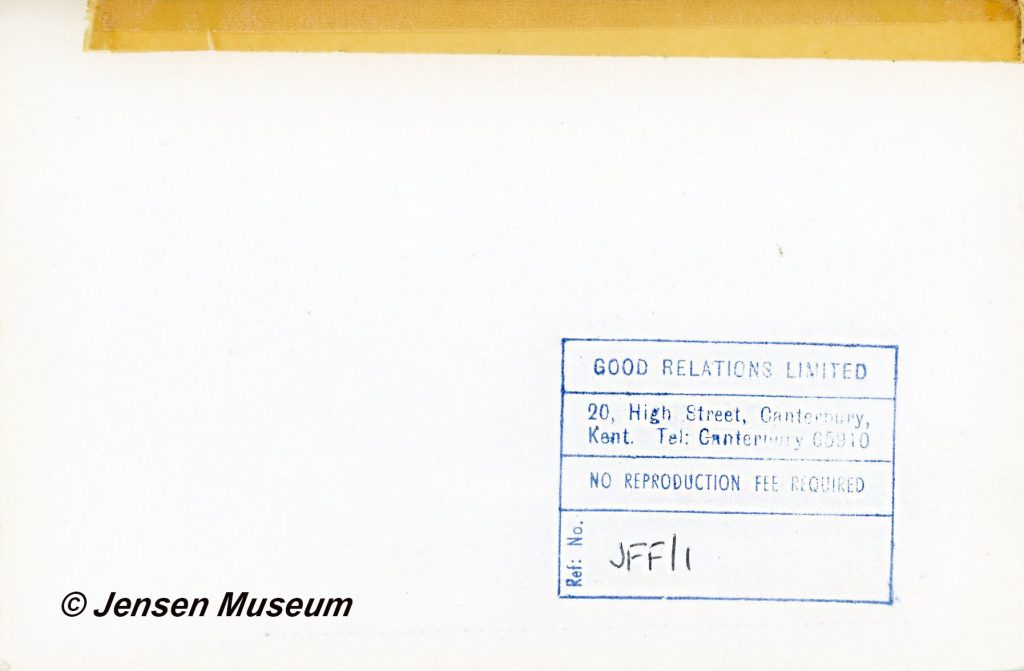 The Good Relations ink stamp to the back of this publicity photograph. Simply referenced ‘JFF/1’. 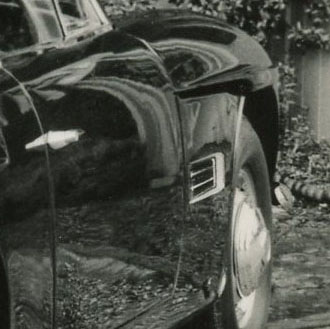 Detail photograph showing the side grille, which had been very convincingly painted into place.

The three brochure were made ready in time for the October Motor Show. The brochure for the P66 (or Jensen Interceptor, as it was to be momentarily named), relied on an artist impression of the car. It was a lack lustre brochure, but since the car would be axed shortly after the Motor Show, this didn’t really matter.

The brochure for the CV8 MK.III came out very well. The indigo blue car looked good, and was certainly capable of enticing buyer’s back to the CV8 concept.

The Jensen FF brochure was another rushed affair. There wasn’t even time to retouch Cooper’s photographs. A standard image of the Oyster  grey CV8 was used. Once again, this really didn’t matter too much. By the 1966 Motor Show all had changed – the CV8 was dead in the water, as was the P66. 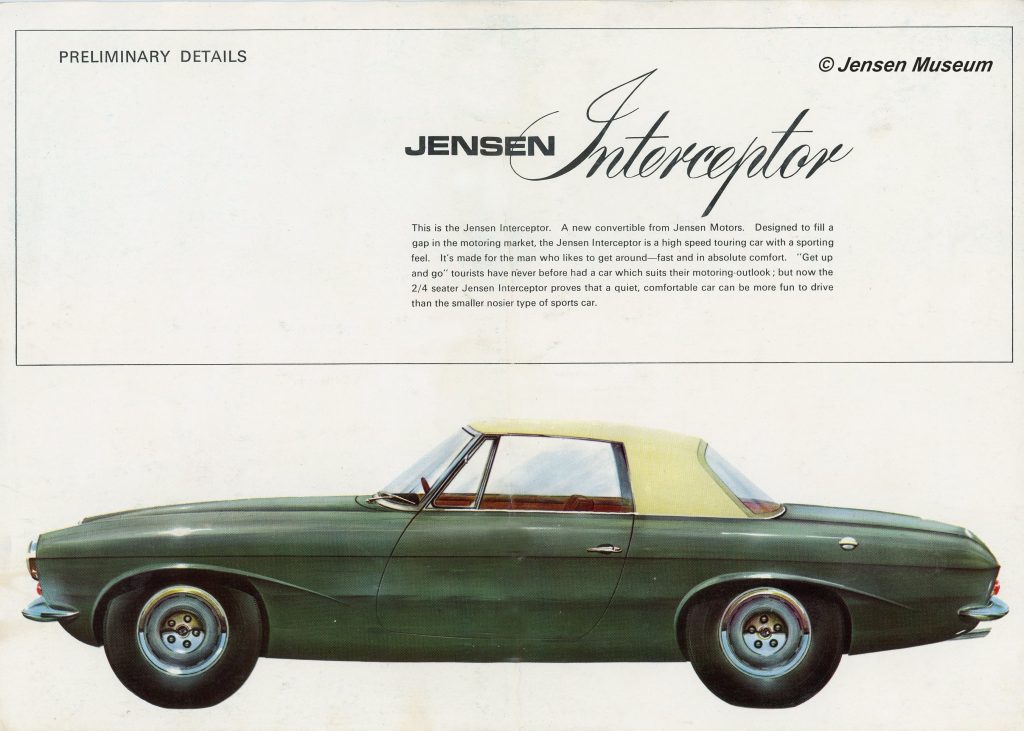 The completed brochure for the P66, using an artists impression of the car. The brochure was made available at the 1965 Earl’s Court Motor Show, where the car was declared as the new Jensen Interceptor. By the following year, Neale’s pet P66 project was shelved, and the Interceptor name given over to the Company’s new Italian-designed car. 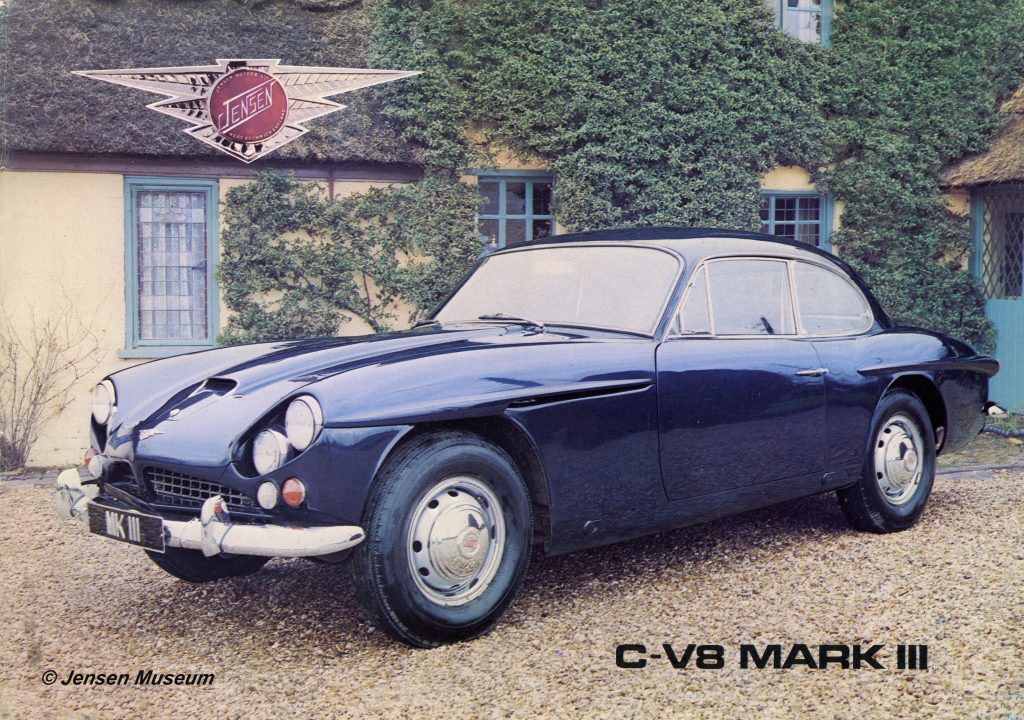 One of Cooper’s frontal & side shots of the CV8 MK.III made it to the cover of the new CV8 MK.III brochure. 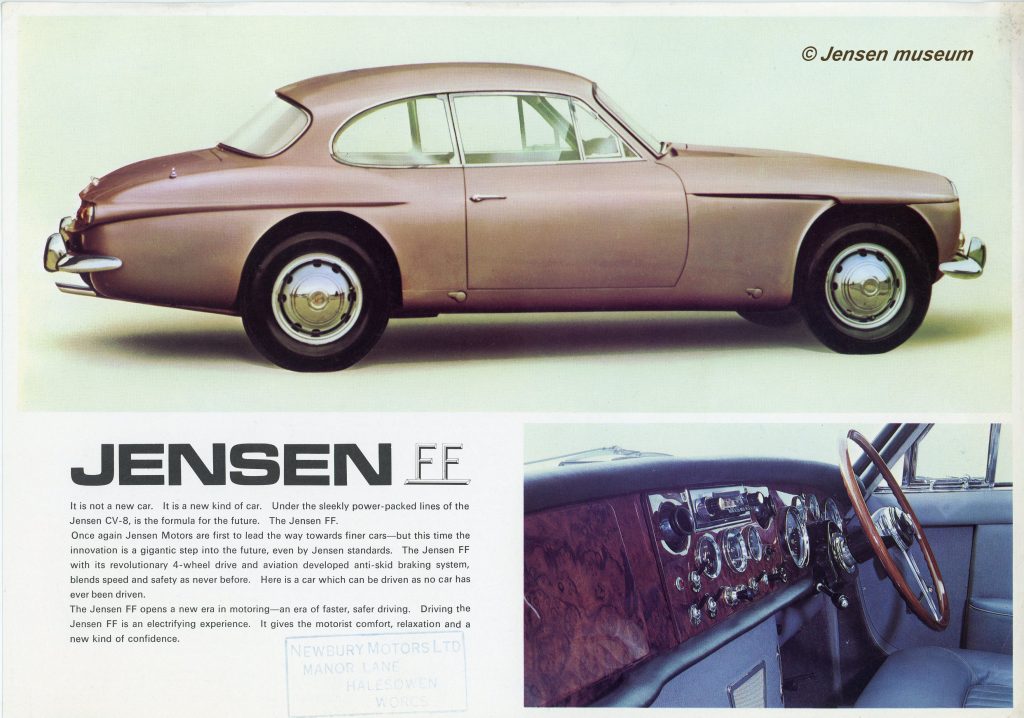 The two-wheel-drive CV8 MK.III, chassis 112/2416, was used for the Jensen FF brochure. The car was in oyster grey, and this colour was  retouched to give a slightly more pale gold hue. Possibly time constraints meant the images were not touched in to give the Jensen FF’s characteristic side grille. The photograph of the interior was from 112/2315, and the same photograph was used in the CV8 MK.III brochure.  This same image was also used in one version of the CV8 MK.III brochure. All in all, confusing signals for the public and motoring press, given this was the launch of the Company’s most radical and important car to date. 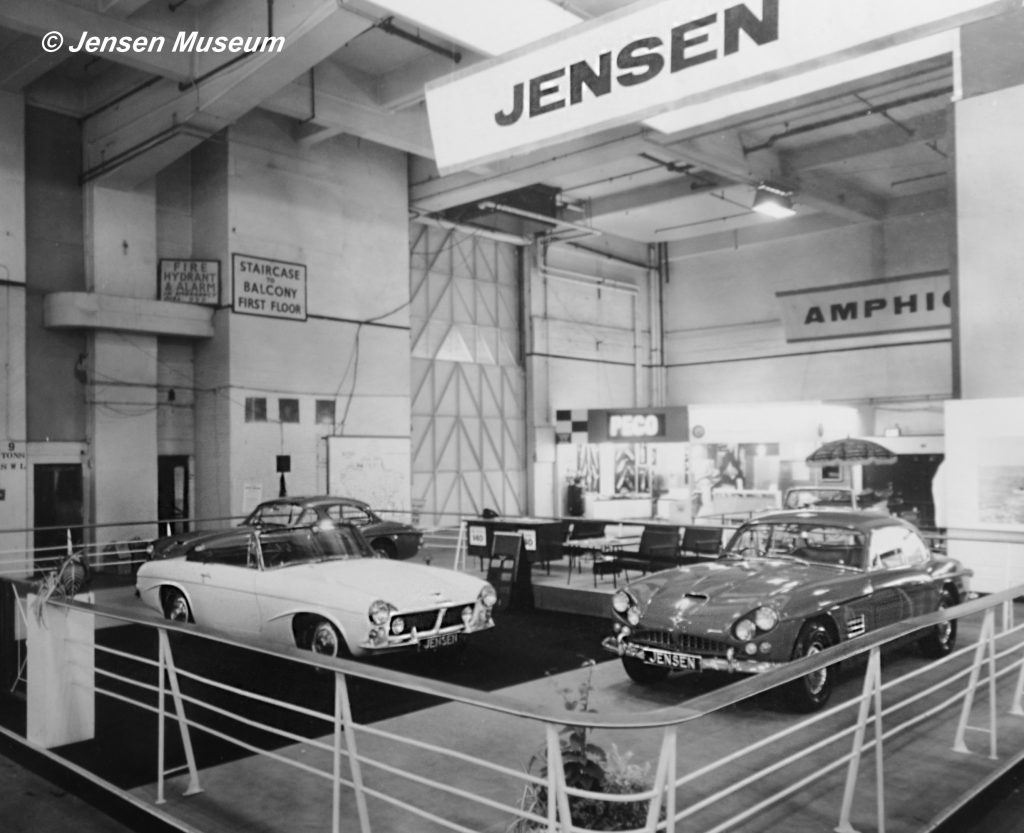 Jensen’s 1965 Earl’s Court Motor Show stand with cars arranged and ready to receive the public and motoring press.  On the stand was a CV8 MK.III, the revolutionary Jensen FF (the Company had future proofed the model by not calling it a CV8 FF). Lastly there was the P66 | Jensen Interceptor.

In the end, everything  changed for Jensen Motors between the 1965 and 1966 motor shows. 1965 was the last of the ‘old’ Jensen Motors, while 1966 was very much everything that was new. And the world couldn’t get enough of the ‘new’ Jensen Motors.

That said, there was one small piece of ‘old’ Jensen Motors that transcended across to the ‘new’ Jensen Motors, and that was their model name ‘Interceptor’. This name was re-used on the new Italian-designed CV8 replacement, and that car took the name as its own.

Few would even remember it had been used twice before.

ASSISTANCE: Do you know the whereabouts of the thatched cottage used as the back-drop to this photoshoot. We would love to hear from you if you do.