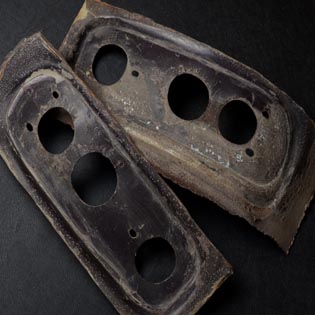 During the 1980s, the partially dismantled remains of 119/002 were acquired by the Staffordshire-based motor-trader, Steven Mee. Initially his intention had been to restore the car, and to that end, he had also acquired the remains of Vignale Jensen FF 119/012. This had been particularly useful, since much of the original 119/002 interior had been mislaid, and 119/012 also had a red trim.

Mee decided that it would be far quicker to convert 119/090 to 119/002, especially since 119/090 was in generally good condition. The drive-line of this car was in good condition, and so was left in place. The complete chassis and most body panels were retained from 119/090, and underwent body restoration work.

During the restoration work, the characteristic Vignale deep set grille apertures were cut from 119/002 and welded into place on 119/090. Likewise the rear wings, which on 119/090 had vented sections, were replaced with the earlier style without vents.

The chassis plates of 119/090 were removed and the original plates from 119/002 were left in the glove box of the car ready for fitting. It was Mee’s intention that when the bodywork was finished (and the car painted), the red leather Vignale interior from 119/012 could be fitted into place. The completed car would appear a good enough facsimile of 119/002.

Unfortunately luck was against Mee, the interior along with other items from 119/012 were stolen from one of his garages. With the loss of the interior, and the crash of classic car prices, Mee gave up on the project.

In a feeble effort to complete the masquerading FF; without involving any great cost; the original black interior fitted to 119/090 was modified to include Vignale style wood sections to the door trims. The metal rear lamp sections of 119/002 were to be welded into place on 119/090, but Mee had given up before that took place, and these were left in the boot. 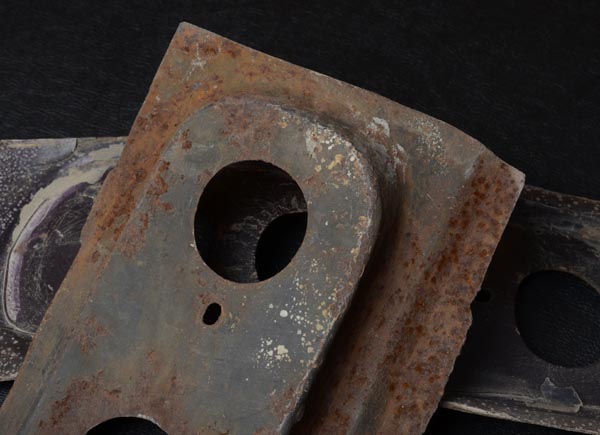 The metal rear lamp sections, cut from the body of Vignale Jensen FF 119/002.

In the early 2000s, Mee placed 119/090 for sale as 119/002. Ulric Woodhams; curator of the Jensen Museum; having realised what had happened to 119/090, decided to purchase the masquerading car. Shortly afterwards the car was registered correctly as 119/090, and various parts originally from 119/002 kept for the Museum’s archive.