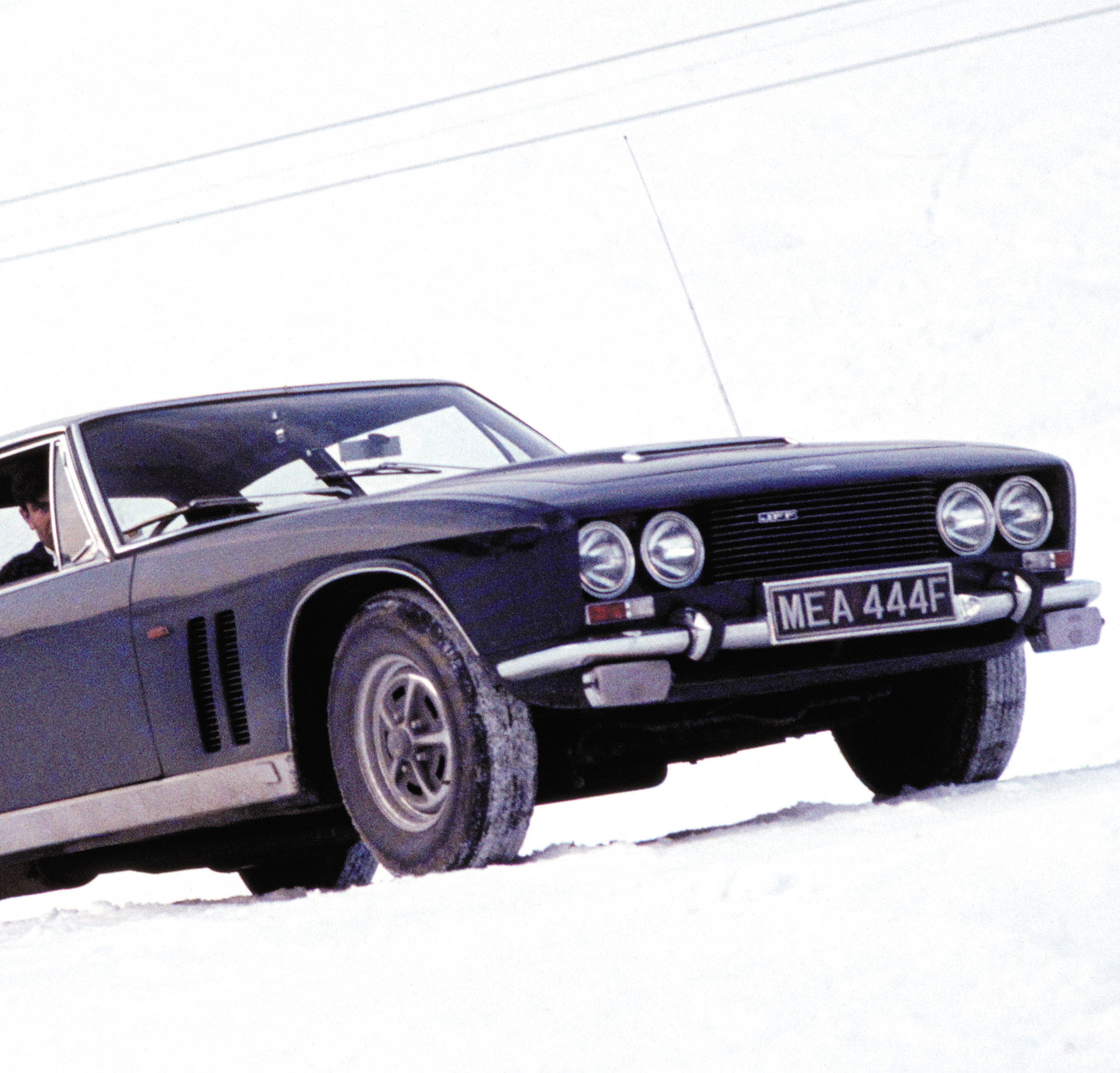 In late 1967, two motoring magazines, Motor, and Autocar, asked Jensen Motors if they could have loan of a Jensen FF for appraisal of the four-wheel-drive system.  Autocar further requested that they would like to drive the Jensen FF across to Switzerland, giving them the chance to use the car in all weather conditions over an elongated period of time. Two demonstrator FFs were available, chassis numbers 119/018, and 119/025. Jensen Motors gave loan of 119/018 to Motor, and meanwhile, 119/025 was given over to Autocar.

The decision to give 119/025 to Autocar unwittingly turned the car into Jensen Motor’s most famous FF, after the car was surreptitiously driven up a ski slope by Autocar’s test driver Michael Scarlett.  Luckily for Jensen Motors, 119/025 was a particularly well set up FF, and according to Wyndam Powell, the Sales Manager at Jensen Motors, one of the nicest FFs to drive, that had so far been made. 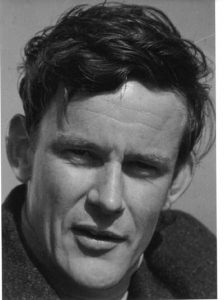 Scarlett was accompanied by his immediate senior, Features Editor Stuart Bladon. In Michael Scarlett’s own words, “….this was a rare plum of a job.”

In fact not until the two men were safely on the night boat for the Hook of Holland, and out of reach of recalling telephones, did they believe the job was going to take place.

As the SS Arnhem manoeuvred into Hook, Scarlett and Bladon made their way from their first class cabin to the stratosphere blue Jensen FF.

Once off the vessel, the two men couldn’t wait to find a stretch of empty motorway, looking forward to unleashing the full 325 bhp of the car’s engine. It was early morning and a bad time for travelling in Holland. Roads were busy with rush-hour traffic along with swarms of sleepy cyclists.

Once on the autoweg, Scarlett put his foot on the accelerator and was soon cruising at around the 100mph region. After an hour and a half, the Jensen was closing in on the Dutch – German border. Soon the Jensen FF was on the German autobahn and being tested to its limits.

Scarlett held the throttle down for long enough, to know not another mph could be obtained. Driving in perfect conditions of sunshine and no wind, the FF reached and sustained 130mph at 5,080 rpm.

The night was spent in the university city of Heidelberg, obtaining directions to their hotel from a rather drunk and disorderly party of students in a Volkswagen, the most sober one of which, was refuelling from a petrol can and smoking at the same time.

The next day, the two men cruised down the magnificently straight and traffic-free Basle autobahn, maintaining a fairly constant 100 mph. In Switzerland, the autobahn ended at Basle, but there was a choice of splendid all-purpose roads to Olten, where the then new Swiss Autoroute would lead the Jensen to Bern.

Neither Scarlett or Bladon had driven in Switzerland during the winter, so they were wondering what it would be like. Would all the small passes be closed, along with the big ones like the Susten ? 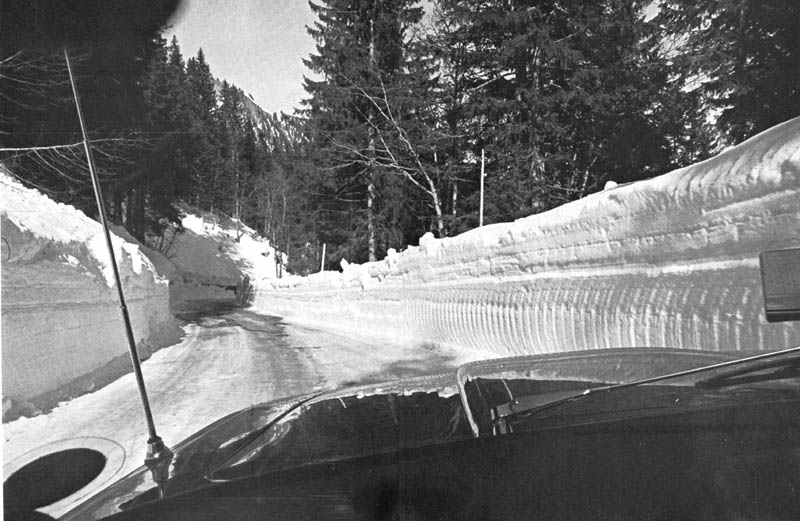 How good can it get, Jensen FF in the snow.

To find out, the two men agreed to divert over the Jaunpass, but although the snow was piled high beside the road, the surface was only wet. Under a deep blue sky and warm sunshine, it was a breathtakingly beautiful run. 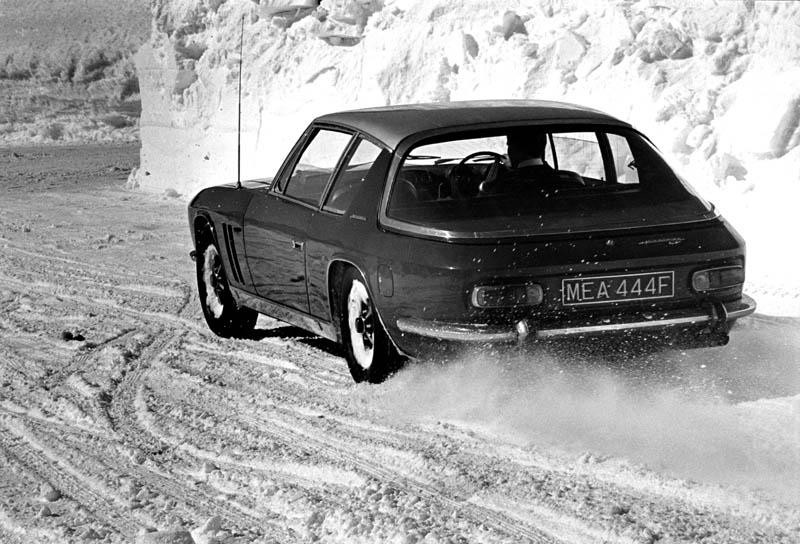 Only the gathering dusk eventually sent the Jensen gliding along the Geneva road to stop for the night at Lausanne. Next morning, Scarlett and Bladon upset the officials at the local tourist bureau, by asking, “…which is the nearest pass which is closed, so we can try driving over it.”

The bewildered officials directed them to the nearby Col des Diablerets and the Col du Pillon. 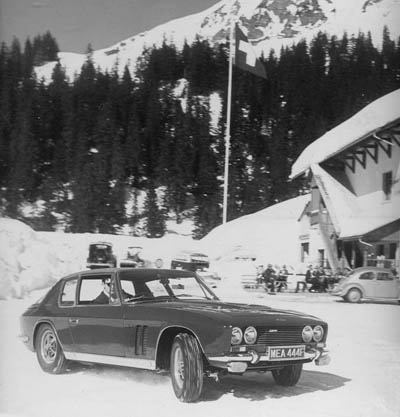 At the base station ready for the ski-slope !

Again a magnificent blue sky, with hot, unbroken sunshine, greeted the two men as the dawn mist cleared. 119/025 made its way through Montreux and again back up the 4,500ft to the saddle of Les Diablerets.

The fantastic spectacle of ever-mounting banks of snow beside the road, coupled with dazzling sunshine glaring back from the whiteness, couldn’t help but impress the two men aboard the Jensen.

Soon they were at the top of the pass. A triangular circuit of deeply snow-covered roads between high banks of packed snow. This  gave an excellent opportunity to experiment with four-wheel-drive handling characteristics.

The Col du Pillon was indeed signposted as closed, however the ploughs had been through, and it didn’t require four-wheel-drive to prove the notice lied.

At the foot of the pass Scarlett and Bladon stopped at Gstaad. It was late afternoon and the area was thronged with skiers. About 5pm the ski-lift stopped, and shortly afterwards the sun dipped behind the peaks. The temperature started falling rapidly, and as the temperature dropped, the skiers disappeared.

Watching all this from inside the Jensen, Scarlett and Bladon suddenly realised the nursery slopes were practically deserted. Could the Jensen FF cope with a steep ski-slope ? It was a crazy idea, but the two men were up for it. In defence of Scarlett’s ‘crazy idea’, he did jump out of the FF and walk up the slope on foot.

As best as possible, Scarlett checked the hardness of the snow, hoping it might just take the weight of the car. It would be incredibly frustrating and embarrassing, for the Jensen to have slowly sunk down onto its belly. Believing the slope was bearable, Scarlett ensconced himself back into the FF and slowly pushed the throttle. 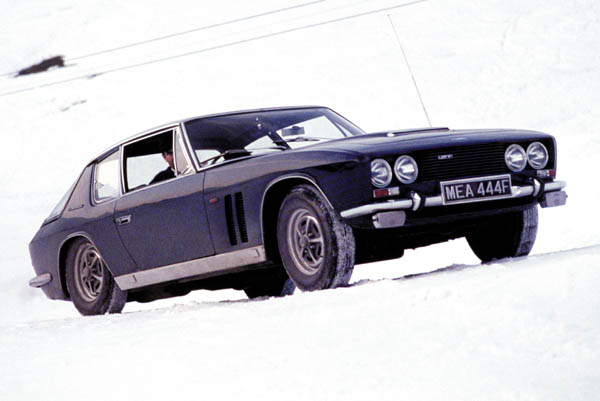 Scarlett edges the Jensen up the slope.

Although the two men were prepared for four-wheel-drive traction, they were staggered at the way the FF; on ordinary Dunlop Crossply RS5 tyres and at motorway pressures; would climb up the slope.

With increased faith in the car, Scarlett even stopped and restarted the FF on a gradient of 1-in-4. All this on snow polished and compressed by skiers. Impressed and excited by their antics, Scarlett and Bladon decided to stay the night at Gstaad and carry out further testing of the FF at the top of the pass the following morning. 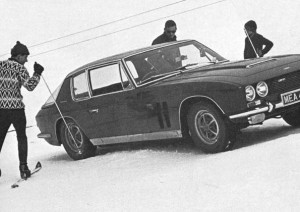 Jensen FF with skiers for company.

Another beautiful morning greeted the two men as they left their hotel. With the FF burbling away, the car was manoeuvred out of the car park and driven up to the top of the pass.

There had been a bitter frost the night before, giving an additional test for the four-wheel-drive, however Scarlett was feeling very confident, after the previous day’s ski-slope activities.

119/025 was put through another round of tests, afterwards, Scarlett ventured onto the ski-slopes and stopped the car half way up. With incredulous skiers stopping and asking questions, the two men endeavoured to take photographs using Scarlett’s Nikkormat 35mm camera.

Having taken enough, 119/025 was driven back to more normal terrain in anticipation of the journey back to England.

Lunchtime found the two men still lingering at Gstaad, even although they were due on at Ostend first thing next morning. They set off, wondering if they could make it from Switzerland to the port by the evening, or if it would require driving throughout the night as well.

They cleared the Swiss border at 4pm and drove the remaining 522 miles to Ostend in 6½ hours. The trip had been exceptional, and even the anti-climax of 40mph traffic back in England, did nothing to spoil the memories of the journey. 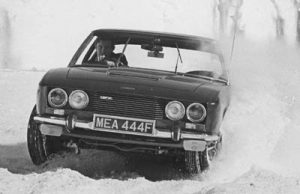 Scarlett was to later reminisce to the author, “…I still, to this day, cannot forget taking the Jensen up a ski-slope. It was a completely mad thing to do at the time, and had the car failed, it might have brought a sharp end to my career as a motoring journalist.”

However, the car did not fail in any respect, it turned Scarlett into a motoring journalist legend, and the car into a ‘ski-slope star’.

Some exceptional photographs were taken of 119/025 on the snow, with one photograph showing 119/025 accelerating away from the camera on a snow bound pass, with an amazing mist of snow flying into the air from the back.

The article relating to 119/025’s experiences appeared in Autocar’s 28th March issue. This issue certainly assisted FF sales and Jensen Motors made full use of the write up. They reprinted another version as a brochure, using slightly revised text and photographs. The front cover heading was entitled,

COPYRIGHTS: All images and text copyright of The Jensen Museum | Alison Scarlett