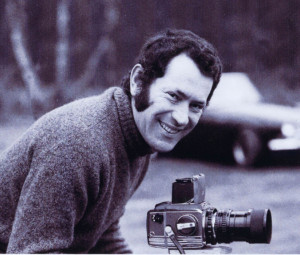 Few motor manufacturers have been lucky enough to have their very own ‘in house’ photographer. Jensen Motors virtually had just that.

Via a friendship with Tony Hussey, the Managing Director of Connolly Leathers, Michael Cooper was brought into contact with Jensen Motors’ publicity company, Good Relations. They needed a good photographer, and it wasn’t long before Cooper was on board and doing the ‘Jensen shoots’. To some extent it was an amazing coincidence, bearing in mind his father owned a Jensen.

Michael Cooper was born on 15th March 1938. His father, George, originated from Scotland and his mother, Alice, from Wanstead in east London. Initially Michael Cooper attended Rowan House private school and afterwards moved to a local state school at Hounslow. With an ambivalent attitude towards education, Cooper left school at 15 and hoped to find work in the world of advertising.

The company, Coltman Displays provided the first employment for the young Cooper. The company provided the front of house stills for motion pictures, but Cooper soon found he was not going to progress within this firm. Leaving Coltman Displays, Cooper joined the advertising agency, Coleman, Prentice and Varley and found them Weight loss motivation willing to allow an enthusiastic young man the possibility to advance. Within a short time, Cooper had been promoted to Progress Chaser, his job was to make sure all work was undertaken on time and within budget.

During his time at Coleman, Prentice and Varley, Cooper was sold a second hand camera – the seeds of a photographic career had been sown. Some of his first images were published in the house magazine. Coleman, Prentice and Varley happened to be the advertising agency for the War Office, this worked out very well for Cooper since National Service was still compulsory. With the connections of his firm, Cooper was allowed to undertake his National Service within the photographic unit of the Ministry of Defence. The advantage of his privileged, almost civilian status, was the total absence of orthodox military training, although a uniform had to be worn once a week when wages were collected. There was one other major advantage of this special National Service posting, Cooper and his colleagues within the photographic unit were provided with top quality photographic equipment. Suffice to say the equipment was used far more for private use than it was ever utilised for the Crown.

After two years, and now 20 years old, Cooper completed his National Service and left his lucky posting having gained a huge amount of photographic experience.

Meanwhile, although rather late in life, Cooper senior had just learnt to drive and purchased a Hillman Minx. This had taken place chiefly due to the repeated suggestion of his son. With National Service at an end, Michael Cooper was free to join his father on excursions to Goodwood for the BARC Members meetings. Both the Coopers thoroughly enjoyed the mystique and glamour of motor racing and this would lead to Michael Cooper’s obsession with motor racing photography. It was on one such Goodwood event that the Coopers had the chance to view, close-up, a Jensen 541. Michael Cooper was very taken with the car and its exciting shape. Sometime later Cooper was meeting up with his father for lunch, outside the restaurant was parked a gleaming white Jensen 541, one can only imagine his surprise, when he found out his father had just purchased the car.

Generously, Cooper senior allowed his son fairly free use of the Jensen, who as a young man, would drive the car hard and fast everywhere he went. Inevitably an accident was waiting to happen,..and it didn’t take long. On one occasion, Cooper was driving the Jensen 541 with his father and sister as passengers. The Jensen was wound up to in excess of 100mph, when the car some distance in front indicated to turn right. Thinking to cut things finely, he misjudged the closing speed and tardiness of the other vehicle and having braked hard, lost control, spinning down the road hitting the kerb. One of the rear wheels was literally torn from the car by the sheer speed of hitting the kerb, before assaulting a telegraph pole and coming to an ungainly stop. Fortunately only pride and the Jensen suffered. The dazed occupants struggled out of the car, and a telephone call made from a nearby house to a local garage ensured the remains of the car would be picked up and taken away.

It transpired the local garage was run by none other than a certain John Coombs, already a familiar name in the annals of motor sport. Coombs would sell Cooper his very first car, a lightly race modified Ford Anglia. Cooper couldn’t help but notice an Ecurie Ecosse Jaguar D Type at Coombs garage. Coombs mentioned this car was going to be driven by Ron Flockhart in the forthcoming 1959 Goodwood Tourist Trophy. During the conversation, Cooper managed to persuade Coombs to provide an entrants pass for the race. The pass proved sufficient for Cooper to gain access to the trackside. By now Cooper was working as an assistant for a fashion photographer operating from the prestigious address of Number 1 Park Lane, London. He borrowed a Hasselblad portrait camera without a prism, this meant that all he could see was reverse images, nevertheless he managed to take some outstanding images of the event. Some of these racing images were published in the BARC journal

It was during 1959 that Cooper joined the famous Steering Wheel Club in Mayfair. Thursday was the favoured night for attendance by the famous drivers of the day, and Cooper would take the opportunity of showing them his work. As time went on this obscure photographer that persistently showed up at all major racing events, was befriended by some of the biggest names in racing. 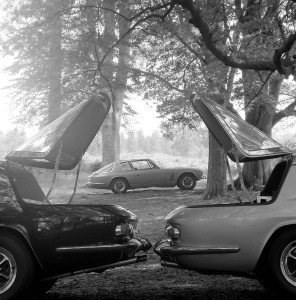 Not long after this original meeting, Powell telephoned Cooper about a possible photo shoot. This would be the first of many calls, and although Cooper was by this time freelancing his photographic skills to various companies, he virtually always managed to fit in any Jensen shoots. In part this was undoubtedly due to his enthusiasm for Jensen cars.

Cooper senior continued his indulgence with Jensen cars, after the Jensen 541, he purchased one of the new CV8 models, which he kept until his death in 1986. His son never actually purchased a Jensen car, but fell in love with the Sunbeam Tiger, which by coincidence had been built by Jensen Motors. The one year old Tiger was purchased in 1967, and provided transport for Cooper during many of his photographic assignments. The car remained with him until his sudden and untimely death in March 2005.

The association between Cooper and Good Relations was long and pleasant, Cooper, it might be said, became the ‘official photographer’ for Jensen Motors between 1966 and 1976. During this decade, Cooper had seen and photographed the rapid rise of this small British motor company through to its demise just ten years later.

ACKNOWLEDGMENTS: Our thanks to Elizabeth Cooper, Gethin Bradley & Tony Marshall in preparation of this article.