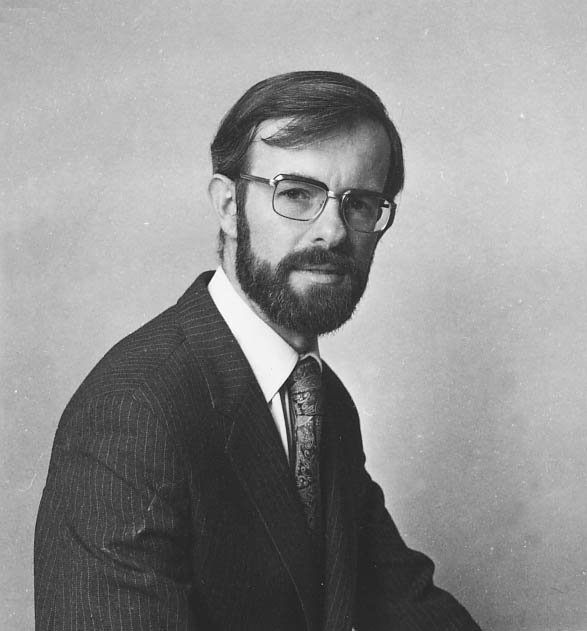 Tony Marshall joined Jensen Motors in 1967 as Assistant Sales Manager. A small ad in Motor Magazine was advertising the position, and Marshall was quick to send off a letter along with CV. Currently working for BMC (where he was involved in market research) Marshall was keen to join Jensen Motors, and to be involved in sales of the new Jensen Interceptor.

After an interview with Richard Graves at Jensen Motors, Marshall was offered the job at £1500 per annum. Marshall started work in July 1967, working directly under the Sales Manager, Wyndham Powell. It didn’t take long for Marshall to gain promotion to Export Manager, and after Powell left, to take over as Sales Manager.

The Museum asked Marshall to give a potted account of what a typical day at Jensen Motors in the capacity of Sales Manager was like.

Job description: At Jensen Motors there was both a limitation of production, coupled with high expectations from our customers. The Sales Manager had to keep his attention on how cars were presented, and to understand the importance of dealing with individual customer demands.

As Sales Manager, I was expected to keep adequate sales and service coverage within the UK, also to look after other parts of the world where we hoped to sell cars. Additionally, I and the Sales Department had to look after visits from dealers and customers to the factory, and liaise with Good Relations Ltd, our public relations agents.

I often worked alongside Good Relations, promoting Jensen cars through numerous events. Certainly it was worth me having a suitcase at the ready, as I was often commuting to other parts of the world, particularly Europe, visiting our distributors.

For me, this led to friendships being made with distributors such as Edgar Schwyn from Switzerland, with whom I stayed in contact with, long after my employment with Jensen Motors had ended.

A typical day as Sales Manager might be as follows. All the events actually happened, but some have been merged together from various days to give us a feel as to the typical duties of the Sales Manager:

I normally arrived at my office just before 9 am, but this morning I was to take Richard Graves’ place at the Monday Management Meeting at 9.30, so I was in by 8.30 to give time for last minute preparation. My task was to report on current sales matters and also any feedback from distributors or customers that had come in from the previous week. 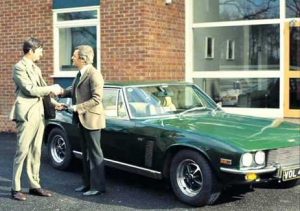 Tony Marshall handing over the Interceptor to Tony Curtis.

Items discussed included the previous week production and sales figures, service problems etc. I reported on my visit to the Brussels Motor Show that I had visited the week before.

We also confirmed the delivery arrangements for the Tony Curtis Interceptor. The delivery was scheduled for February 15th, and the handover was arranged to be at Pinewood Studios where Tony was filming. I was very happy to get the job !

Coming back to my office, I almost collided with Maureen, one of the canteen staff, who was bringing around the morning tea or coffee on her trolley. With a coffee in hand, I had a couple of phone calls to make. Among them, the arrangements for the delivery of the Geneva Show cars.

Experience with various methods suggests that collection by Edgar Schwyn’s drivers are the best method. I always had a grin on my face when I phoned Edgar, since myself and Jim Branson (Sales Administration) called Switzerland, Schwynzerland.

Don Penny from Mustow Green Garage (Jensen distributor) was bringing a potential customer and his wife over for a factory tour. They arrived promptly and we were able to give them the full works tour including Fibre Glass and Trim departments, before the factory broke for lunch.

The factory had a general canteen and three dining rooms, one for Director’s and VIP visitors, one for middle management, along with a junior management dining room. As Sales Manager I would be elevated to the Director’s dining room if I was taking in dealers or oversea’s visitors.

Although using the Director’s dining room was always a treat, today, I decided to take Don Penny and his customers to the Manor House in West Bromwich for lunch. Don’s customers started talking about car colours, so the visit appeared to have been successful !

Meeting with Richard Graves and Brian Spicer (Deputy Chief Engineer) concerning engine for the Jensen-Healey. Arranged to borrow a BMW 2002tii from Rowleys of Bradford (Jensen distributors), so the Engineering Dept could evaluate it for possible use for the Jensen Healey.

I later found out that Brian and his crew had removed the engine from the BMW, fitted it into one of the Jensen Healey prototypes and ran it for the weekend without telling anyone!

It was hardly worth leaving Richard’s office, as there was only about twenty minutes left before our next meeting. Anyway, it gave us both time to make a couple of calls.

My next meeting with Richard Graves, along with Paul Archer (Sales Administration), to discuss latest amendments to production figures and latest feedback from distributors and dealers.

Yet another meeting with Richard Graves to go through planned overseas shows, and visits for the next four months, taking into account the Geneva Show in March and New York in April.

As I had been to the USA the previous year, for the first showing of the Interceptor in Los Angeles, Richard is to cover New York this year.

When in New York, we favoured the Essex House Hotel on Central Park South, which had been occupied by British SOE (Special Operations Executive) during part of WW2, and where early contacts had been forged with the emerging CIA. Nice!

I packed up for the day, since I would be leaving early the following day for a visit to Wilmslow Motors, which recently changed hands. They were our second biggest outlet after Follett, averaging about 40-45 cars a year. Little did I know that some few years later I would leave Jensen and run Wilmslow Motors.

Normally I went home around 5.30 | 6 pm, sometimes staying later to clear my desk , particularly if I was making a trip abroad.

NOTES: Although by 1971 Jensen Motors were no longer producing cars in fibreglass, they still maintained a fibreglass department. Here, a multitude of components such as rear seat backs, transmission tunnels and dashboards, were made up in fibreglass for the Interceptors and FFs.

REQUESTS: Did you work at Jensen Motors in any capacity (perhaps you are Maureen who worked in the canteen), if so, would you like to write a typical ‘Day In The Life’ of yourself at Jensen Motors. It doesn’t matter if you do not have writing skills, we can help you with that. please contact us at archive@jensenmuseum.org, or telephone +1694-781354.