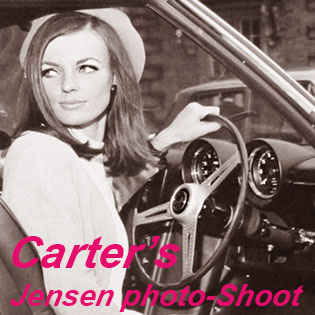 Back in June 1968, professional photographer, Leo Carter, was given a photographic assignment. Take a new Jensen Interceptor  out into the country, and undertake a photo-shoot with a model.

Kitted out in the cutting edge of 1968 fashion, the model would be photographed both standing by the Jensen, and sitting in the driving seat. Carolyn Dee, Carter’s partner, has given the Museum access to his one and only Jensen photo-shoot.

Jensen Interceptor chassis number 115/2796 was designated as a demonstrator car for Wilmslow Garages, Wilmslow, Cheshire. Specification was white paint, with black leather trim. The car was fitted with engine  number 893 015B.

No options were requested, apart from power assisted steering, which didn’t come as standard at that time. The car was completed at the factory ready for sale on 25th March 1968. 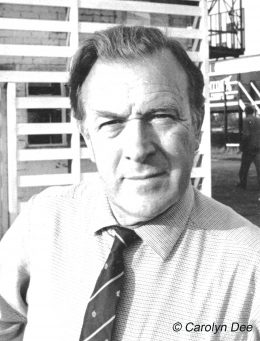 Leo Carter photographed during the 1960s.

Charles Leo Carter was born in 1915.  He left school at 16 and started work at Allied Newspapers in Manchester.

Carter’s first job was to learn about chemicals in the dark room, and to develop negatives that the Staff photographers brought in.

At the age of 18, and intent on a photographic career, he went to the 1933 Boy Scouts Jamboree in Budapest, Hungary, and photographed the event.

Carter even managed to  photograph Lord Baden-Powell astride his horse.

After this event, Carter returned, and continued working for Allied Newspapers.

However, the start of a budding freelance career was on the cards.

He  set himself up as a photographer, and had his first photographer’s Rubber Stamp made,  ‘C. L. CARTER–PHOTOGRAPHER, 497, Worsley Road, Manchester’.

Carter would remain working with Allied Newspapers until 1940, but also working as a freelance photographer in his spare time.

During 1939 Carter went to Donington Park,  photographing the Grand Prix. He also had the opportunity to photograph the racing driver, Hermann Lang. It was from this time, that Carter signed himself as Leo Carter, as opposed to Charles Carter

After Carter left Allied Newspapers in 1940, he worked as a freelance photographer for the Daily Mirror, Daily Mail, Daily Express and Sunday Express.

During the war Carter was one of the official photographers for the Air Transport Auxiliary at Ringway (Manchester Airport).

It was also during the war, in 1941, that Carter was brought in as a ‘stills’ photographer at Denham Studios. This was for the making of the film, They Flew Alone,  with Anna Neagle, Robert Newton and Nora Swinburne. The film portrayed the story of Amy Johnson, an ATA pilot.

In 1957, Carter won the ‘British Press Picture of the Year’ Award. The picture taken was of the burning building of Paulden’s, a department store in Manchester.

Carter was on his last reel of film and the last negative on the reel.  He took the shot and timed it just right.  That was the picture that won!

Other photographic highlights included, the opening of the Dish at Jodrell Bank, Cheshire. One of the picture’s of the Dish was taken from a helicopter. Another prize winning photograph was of Princess Margaret when she visited Manchester in September 1963.

In 1971, the Daily Express sent Carter on photographic assignments to Northern Ireland during the troubles. His diary notes reads,

Carter always went around with two cameras, and acquired no less than 21 cameras during his lifetime. He died in 2001 aged 86.

Unfortunately we are left without too much detail of Carter’s photo-shoot of the Jensen and model. We have no idea of the models identity, or indeed, for what fashion house the clothes came from.

However, we do know the photo-shoot took place between late June, beginning of July 1968. (the finished photographs are dated 4th July 1968) and that Carter was living in Manchester at the time – working for the Daily Express, and for himself on a freelance basis.

Wilmslow Garages had taken 115/2967 as a demonstrator car, which was probably at their premises by the end of April 1968, it was perfectly situated for Manchester-based Carter to have loan of for a photo-shoot.

That said, Wilmslow Garages wouldn’t want their new car being taken far, putting unnecessary mileage on it. But, just 10 to 15 minutes down the road at Siddlington, was the 18th century Capesthorne Hall.

This was a perfect venue for the shoot. The only prerequisite now, was for the weather to stay dry on the day of the shoot. They were in luck ! 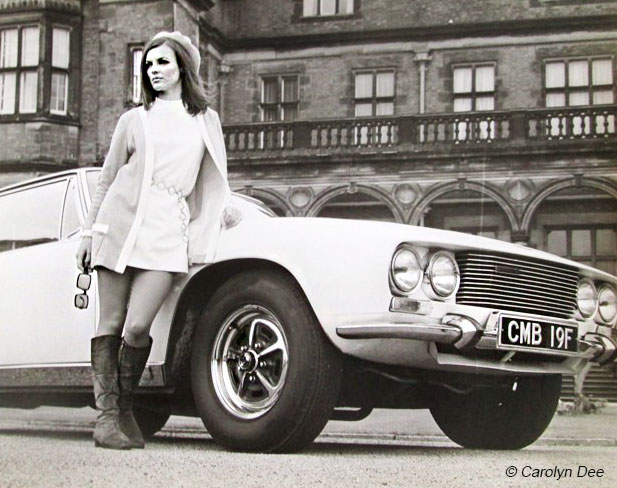 The photo-shoot starts with the model standing by the Jensen. The CMB 19F registration clear in this photograph. 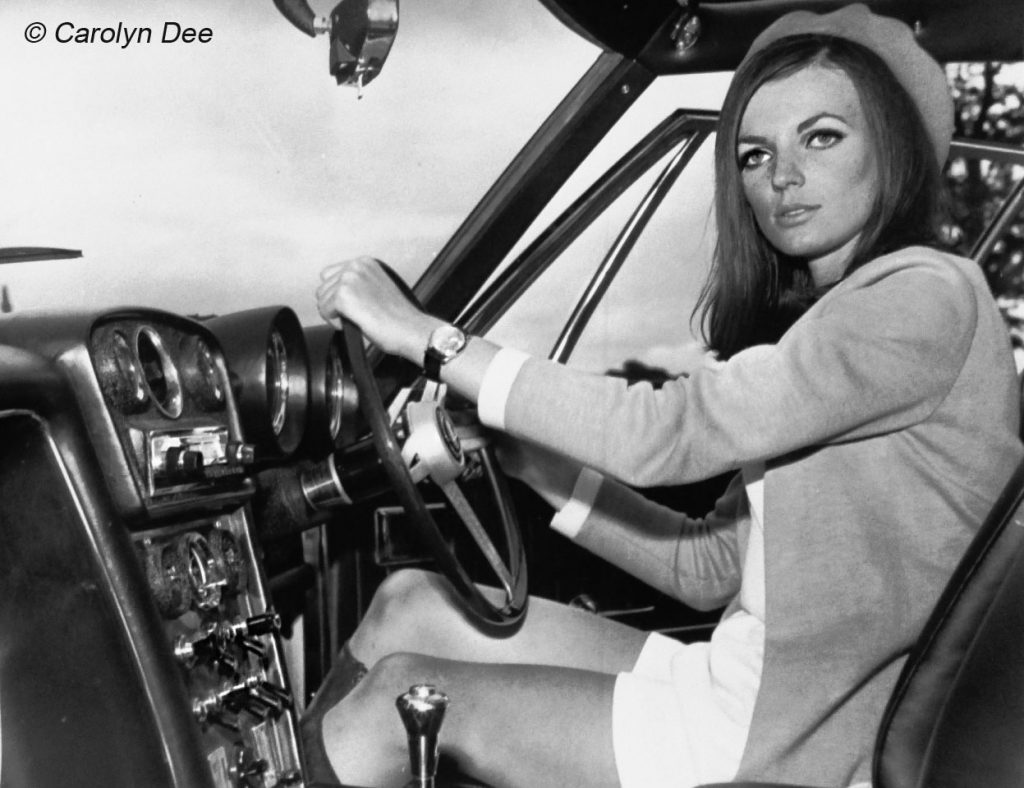 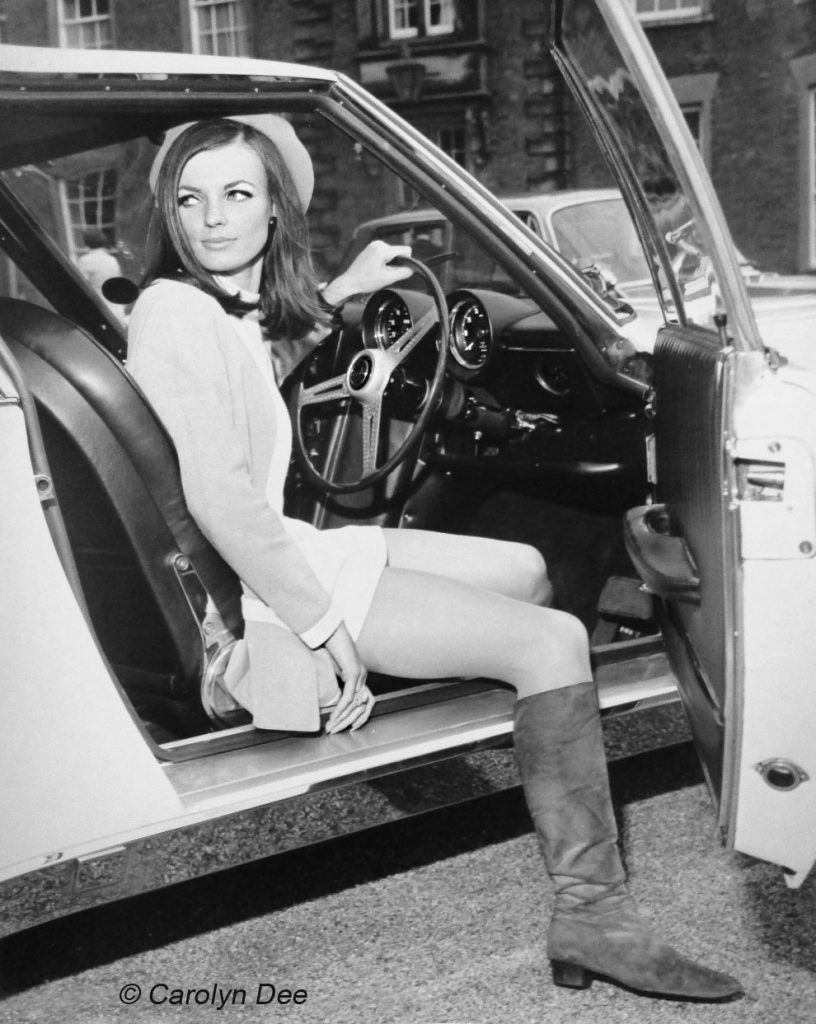 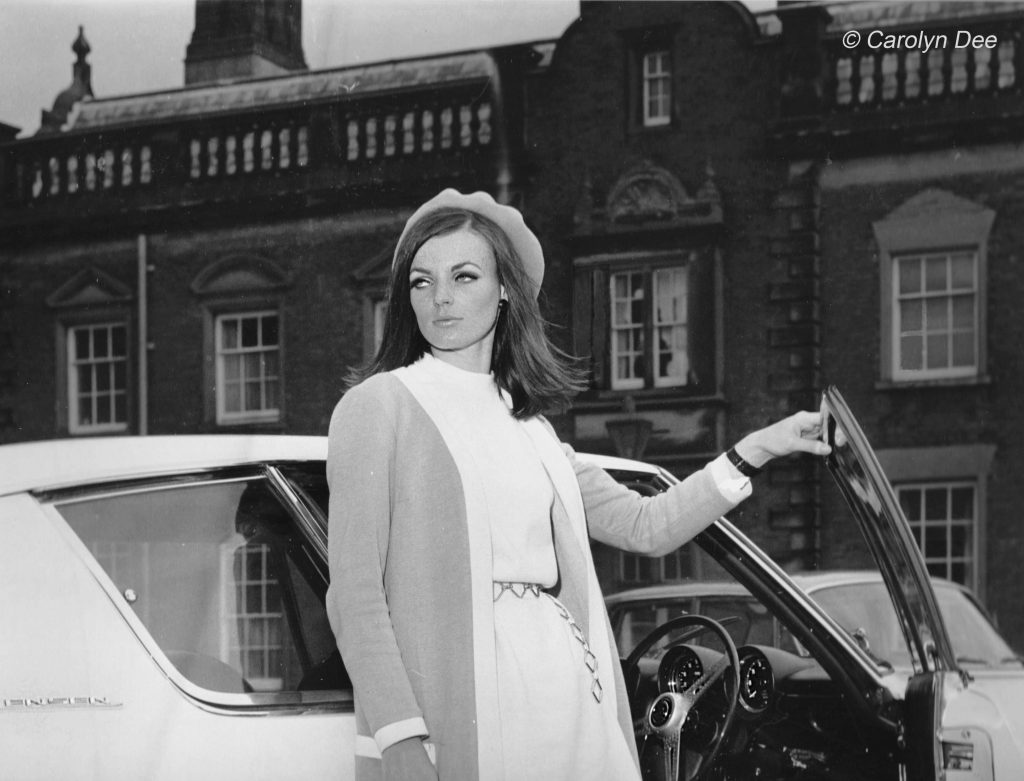 The Jensen name clear to the rear side pillar in this image. 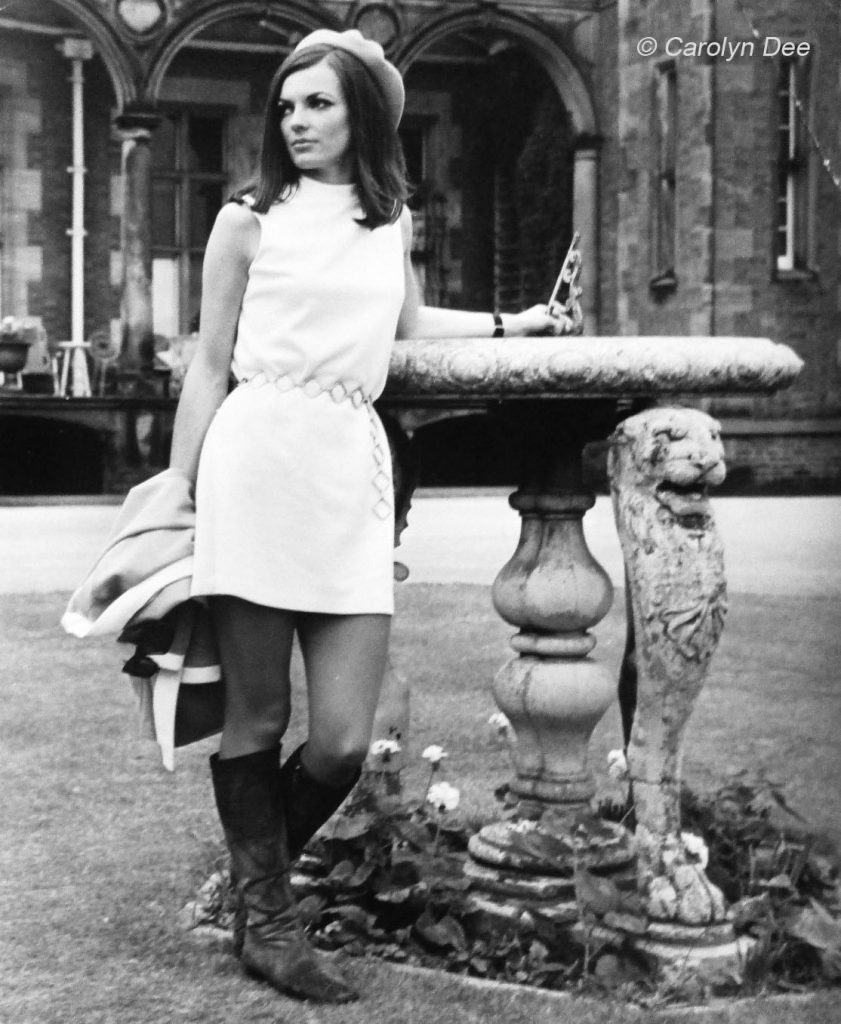 A typically glamorous range of photos were taken that day, but despite research by Carolyn Dee, so far we do not know the identity of the model, or indeed what fashion house her clothes came from.

At some point, 115/2796 had a registration number change from CMB 19F to PJR 137F, undoubtedly due to an owner placing their private registration on the car.

The Jensen Owners’ Club records show four owners recorded on their Register. At one point the car was in Glasgow, then later it changed ownership taking it to Balloch, Barnard Caste  and Tarporley. However, the records are sketchy, and there isn’t confirmation of dates the car was owned by its various owners. It seems possible all these owners stretch back to the 1980s.

ADDITIONAL INFORMATION: If you know the identity of the model, or indeed, if you have owned, or do own 115/2967 (CMB 19F), we would love to hear from you.