One of the many secrets of the so-called early Jensen Interceptor, is the fact the entire front body has to be removed to allow removal of the radiator. On more than one occasion, a garage charged with changing a leaking radiator, has started cutting away inner panels to try and gain access to the radiator’s fixings. And, to some degree one has sympathy with a non-specialist garage, that has been confronted with this job. Who would think the entire front body had to be removed to take out the radiator. The Museum needed to remove the leaking radiator from their 1954 Interceptor, and to undertake other work. The Museum gives a step-by-step account of this unusual job.

Removal of The Front Body

Step 1 is very straight forward. The bonnet needs to be removed. This involves disconnecting the bonnet stay, and undoing four  bolts which attaches the bonnet to the hinges. 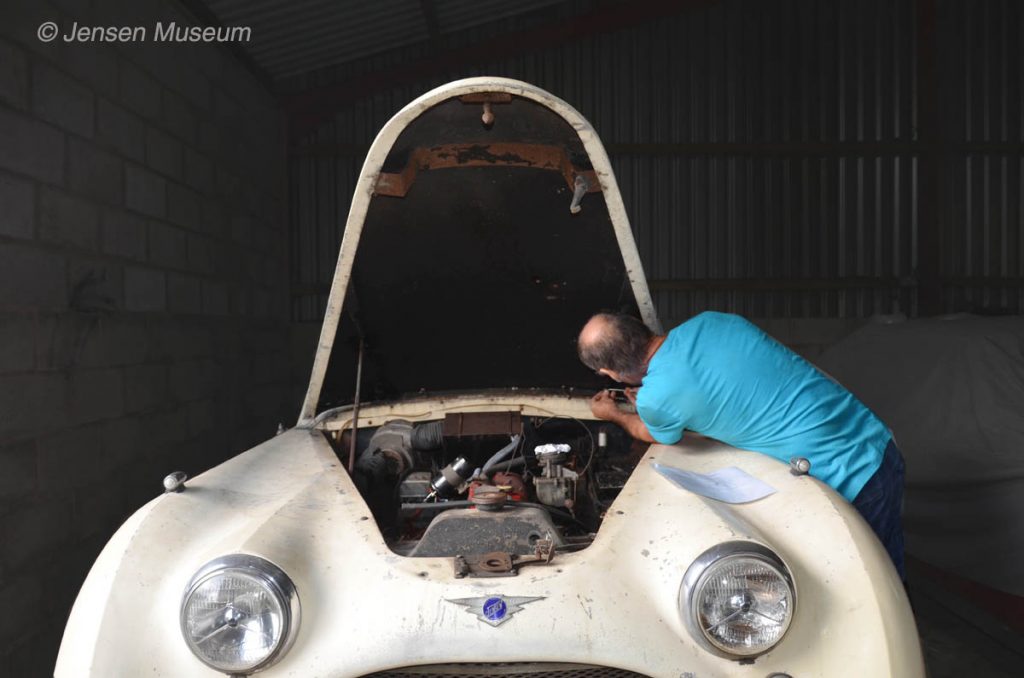 Removal of the front bumper from the bumper irons. 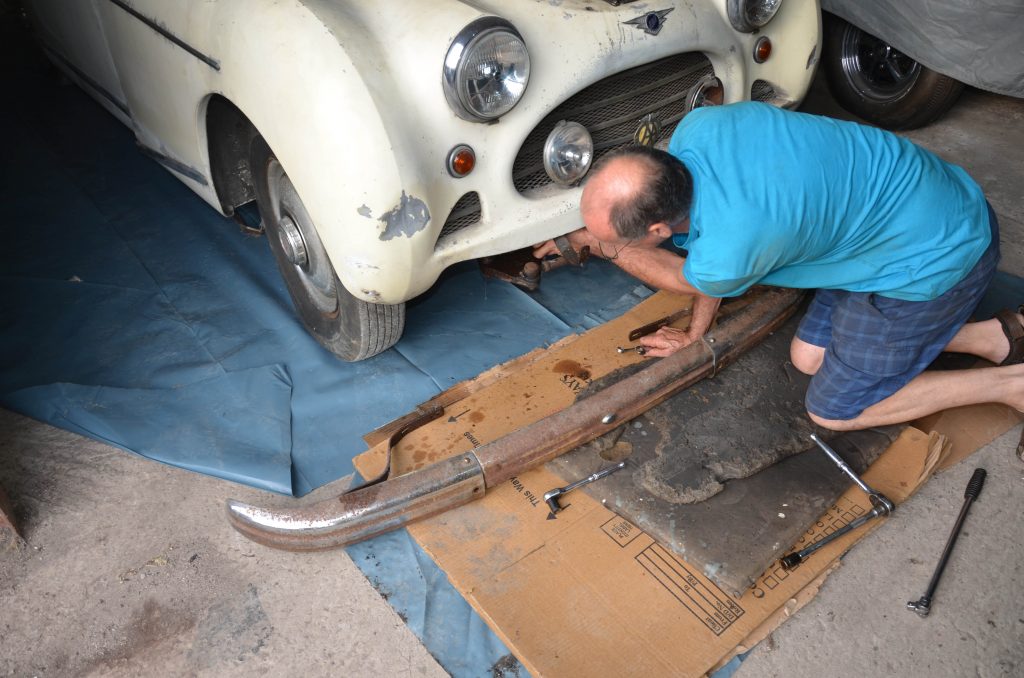 Bumper unbolted from the irons. 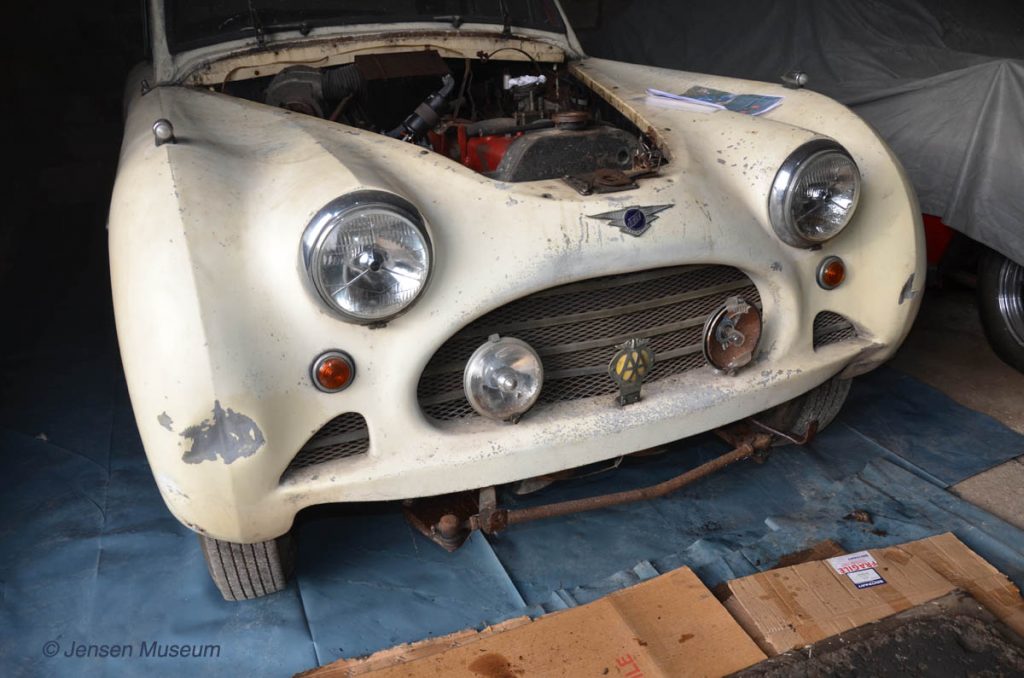 Removal of four bolts from  the lower angle each sides on the on the firewall. 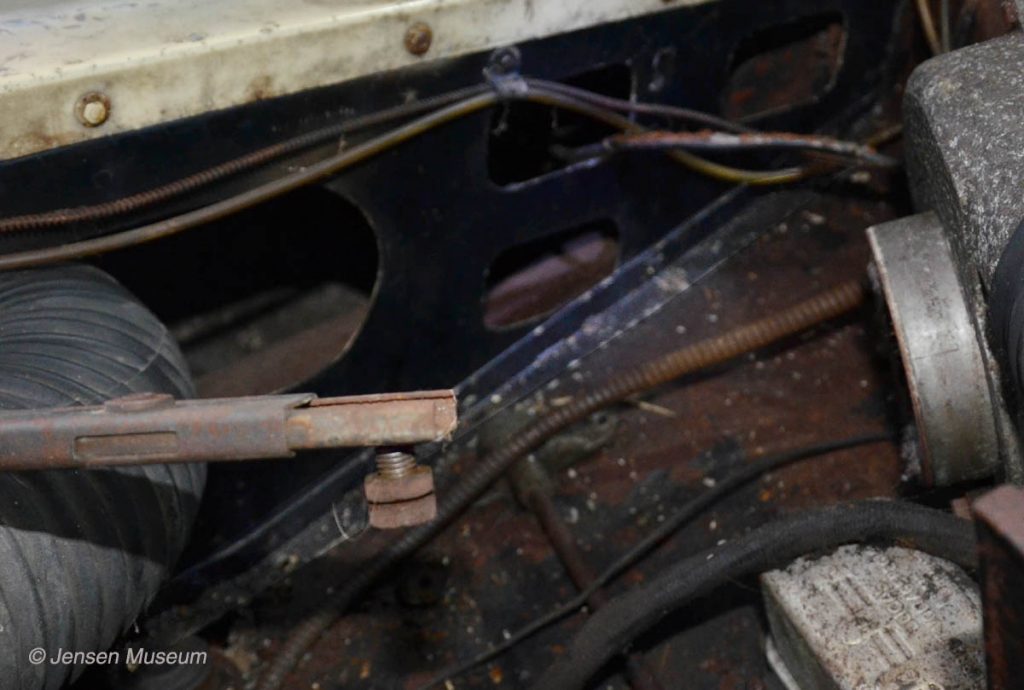 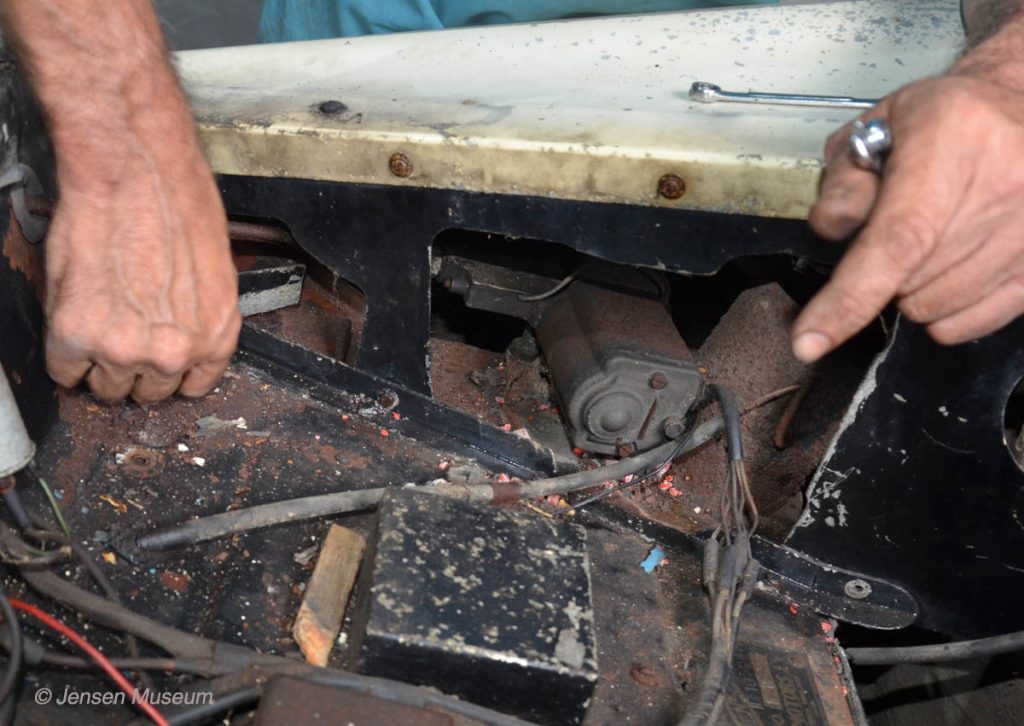 The angle piece to the passenger-side.

Removal of two bolts either side below drip tray. On our car three of the bolt heads snapped off before the bolt released (despite generous squirts of plus-gas). The passenger-side top bolt wouldn’t give at all. Eventually we had no option than to remove the drip tray and cut the head off. 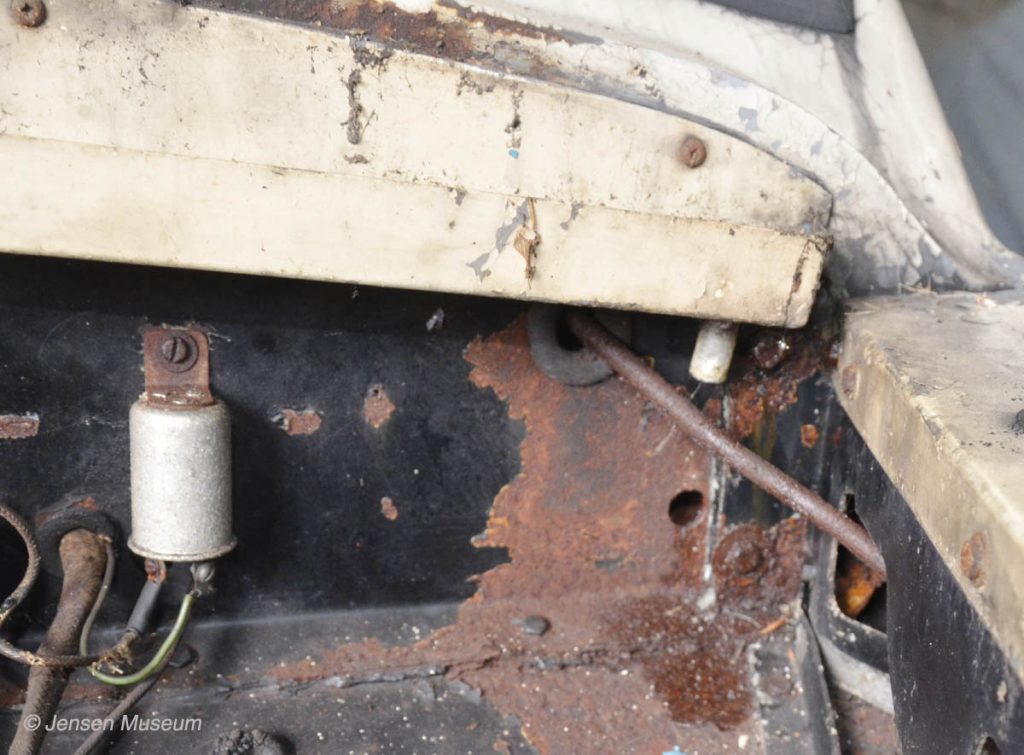 The two bolts which fit the wing at the top of the bulkhead (drip tray still in place). 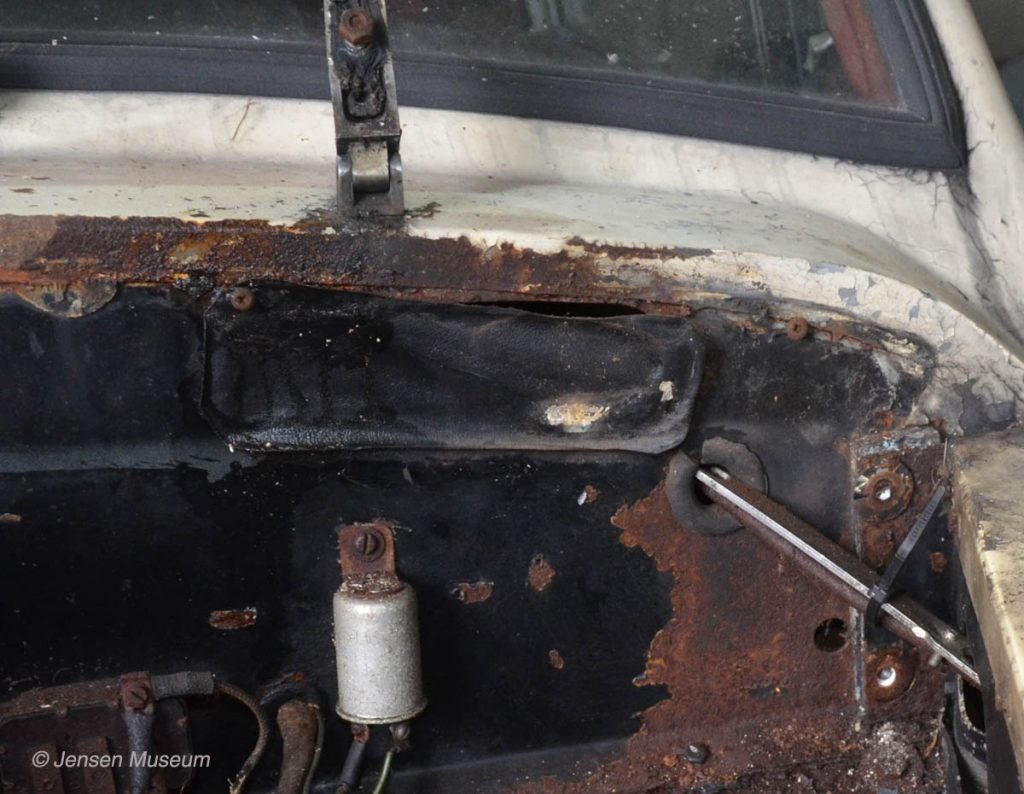 With the drip tray now removed the top bolt is easier to access. In our case , this bolt was particularly stubborn. Eventually we tied a piece of steel over the top of the wiper motor bar, and cut the head off with an angle grinder.

Jack up car and remove front wheels. Then removal of one bolt either side on stay. This bolt is directly behind the wheel, and goes through to the inside. It is either a two man job with one man holding a spanner to the head on the inside of the engine-bay, while the other works within the wheel arch. Other than that one would need to jam the spanner is place within the engine-bay. 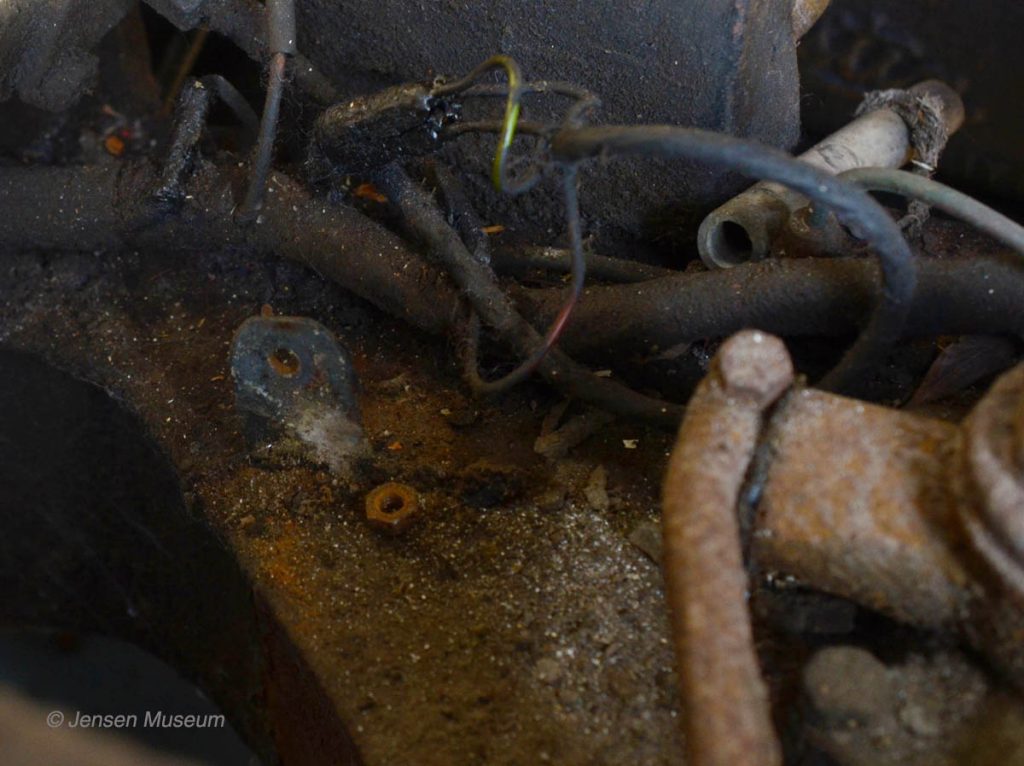 Driver-side metal bracket welded to the chassis. The front body wall bolts to this. 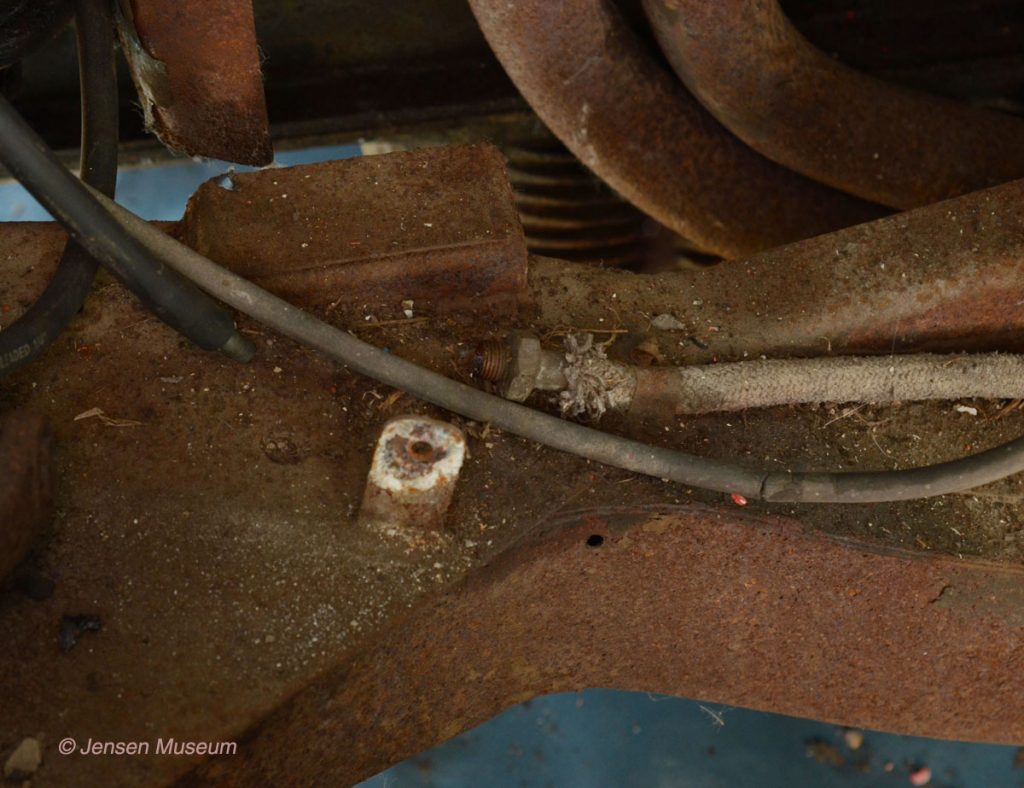 Passenger-side metal bracket welded to the chassis. The front body wall bolts to this.

Removal of plate from bottom of wing in front of door, where it is attached to the front of the tube.

Removal of the bolt each side towards the centre of the panel by the doors. 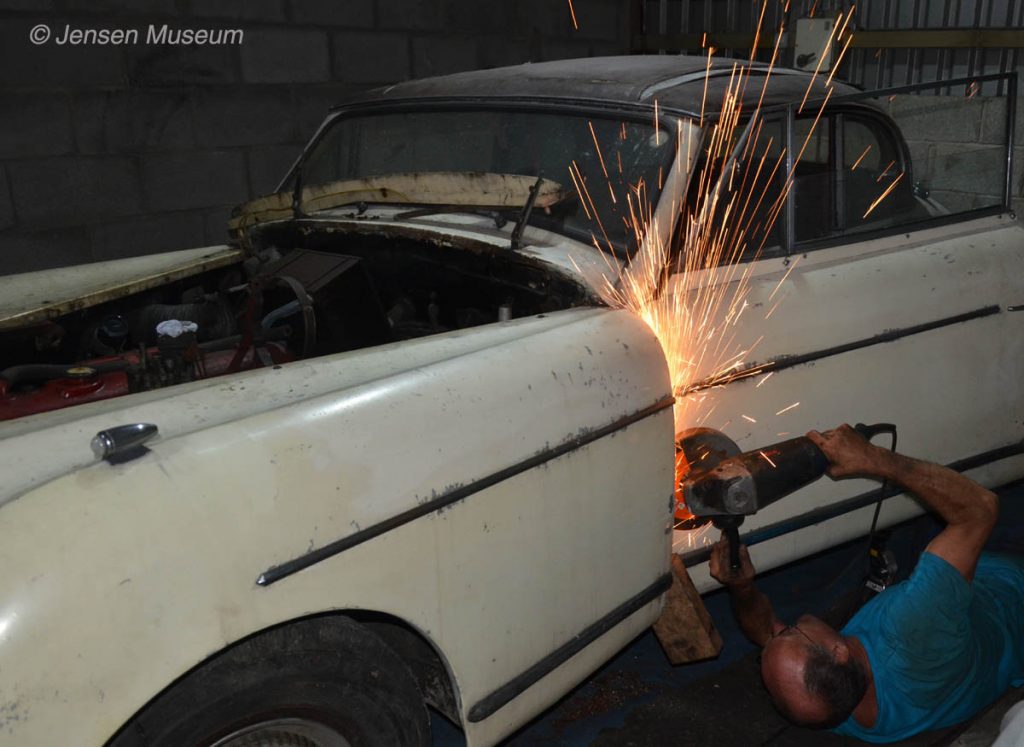 The centre bolt just wouldn’t budge, and access is difficult. The method we used to remove the bolt looks quite scary but was effective, and incredibly did not cause any damage. The doors were opened and a wooden wedge placed at the base. An angle grinder was used to grind the head off. Someone else might find a more appropriate way to get these bolts off. 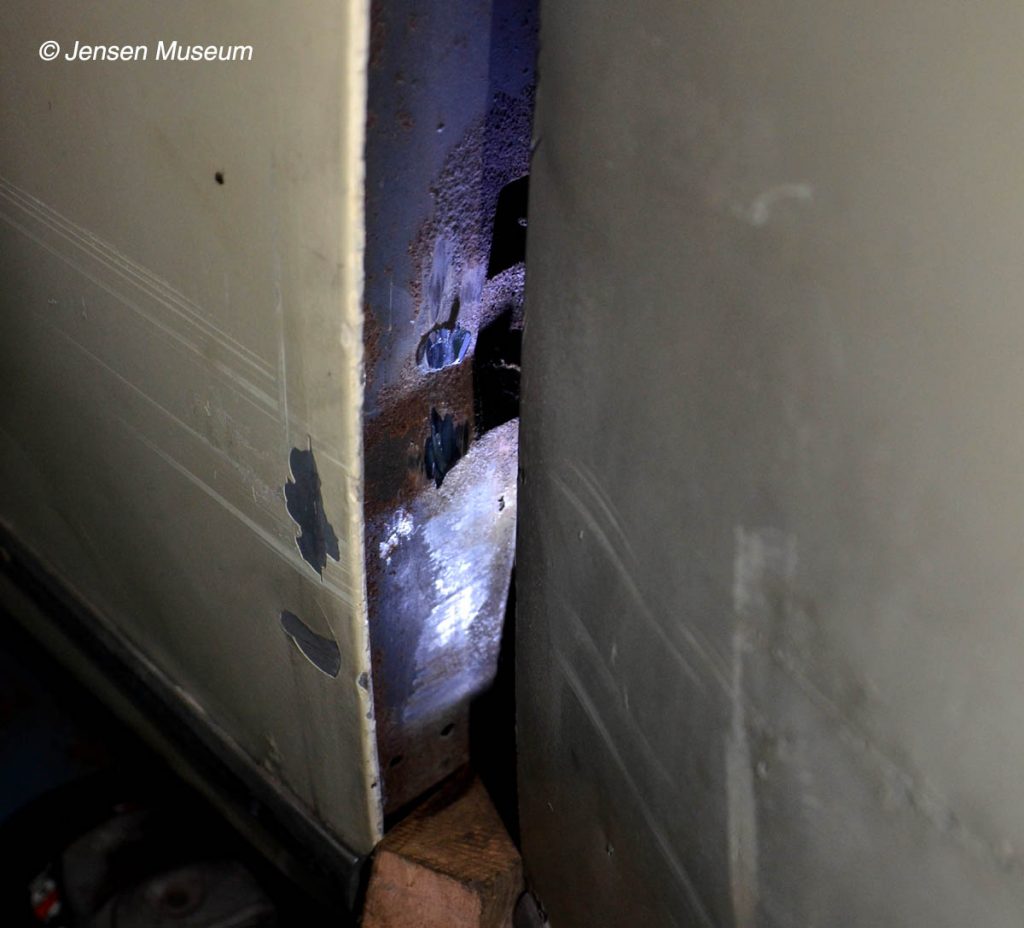 The half-way stage, with most of the head ground off. A little more careful grinding would take it off completely. See the image in Step 12, showing the hole where the bolt was.

Removal of two bolts from radiator frame behind top of radiator. 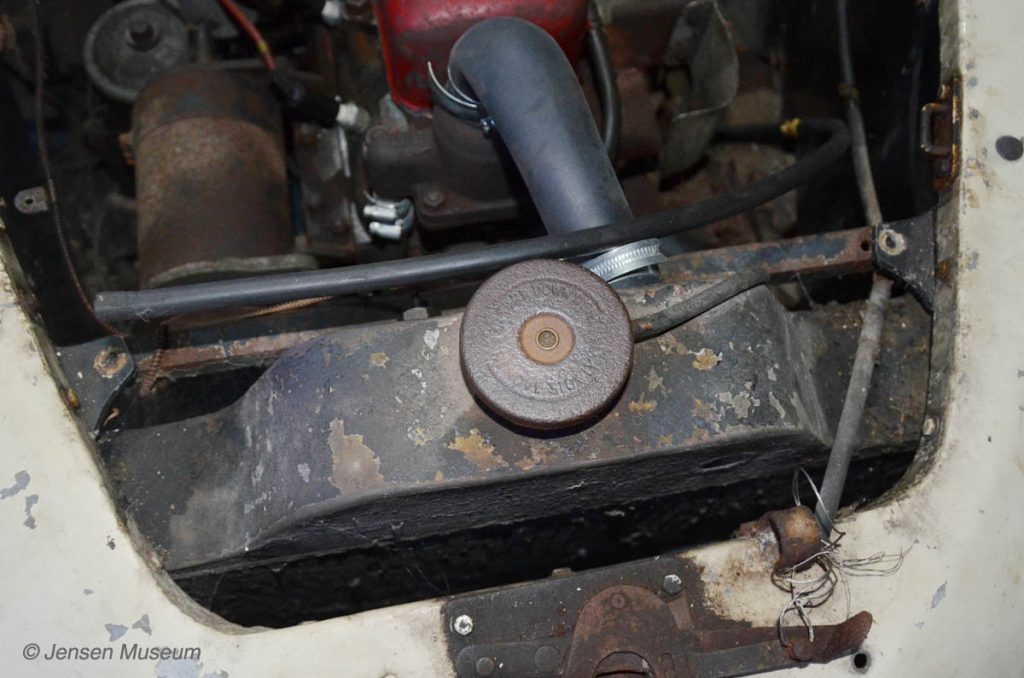 A small angular piece of metal comes out towards the radiator each side. The two bolts have to be removed to free the front body from the bar immediately behind the radiator. The top bar forms a part of a square metal bar surround which the radiator bolts to.

Removal of two bolts from under front grille, where it is attached to the angle iron. 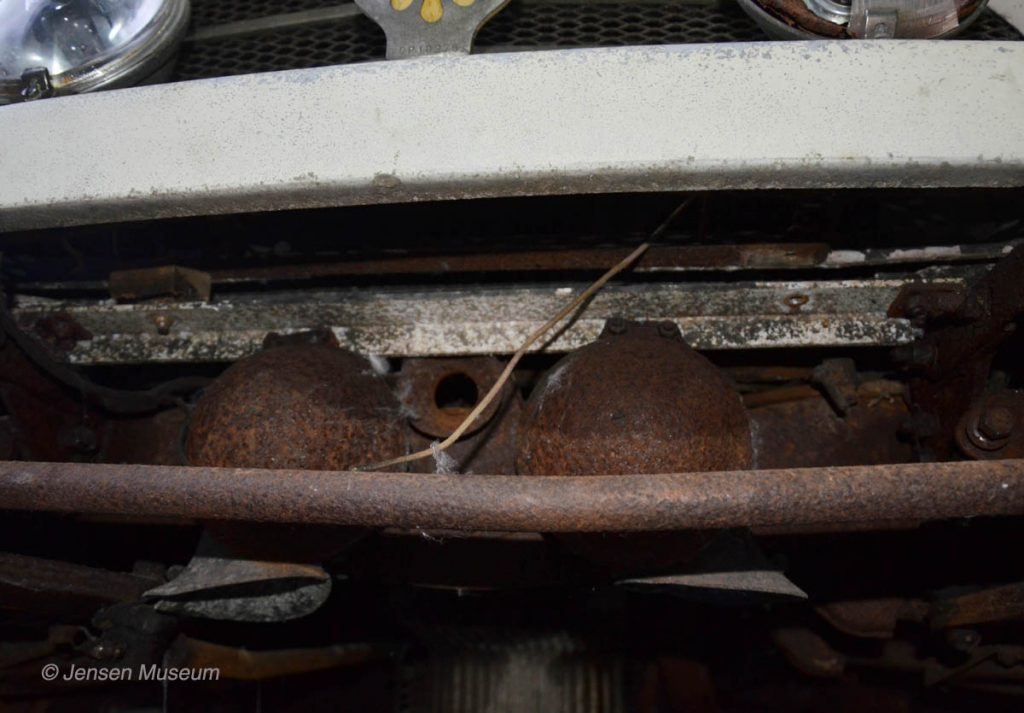 Two bolts run through an aluminium angle piece. Both of these have to be removed. 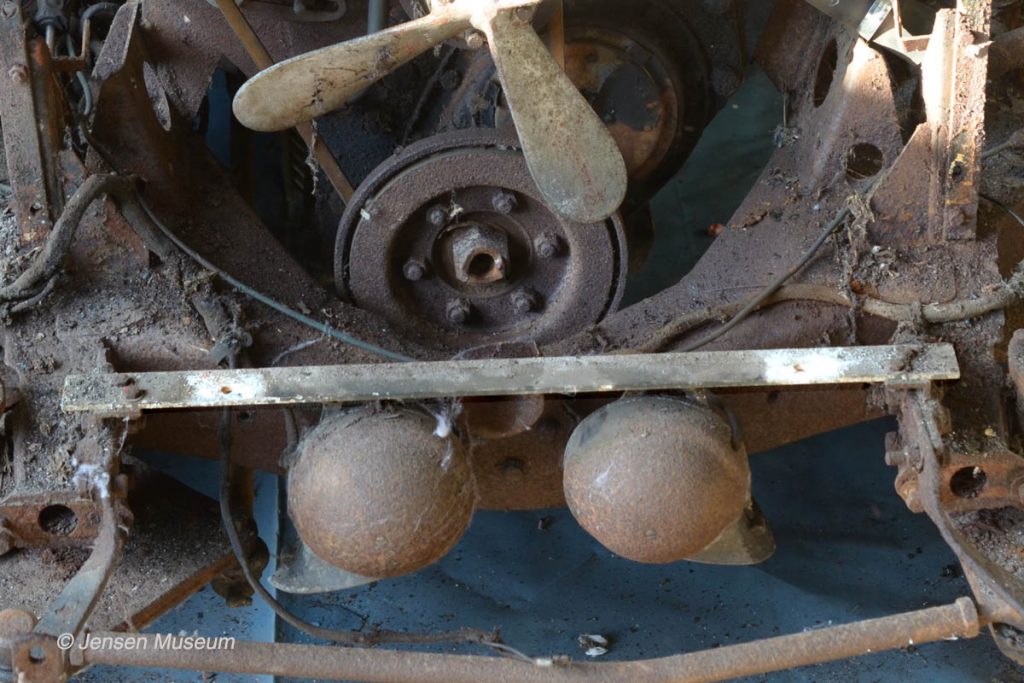 The front cross bar. The two body fixing points can be clearly seen. Typical of Jensen, neatly finished wooden spacers are used between the bar and the body. 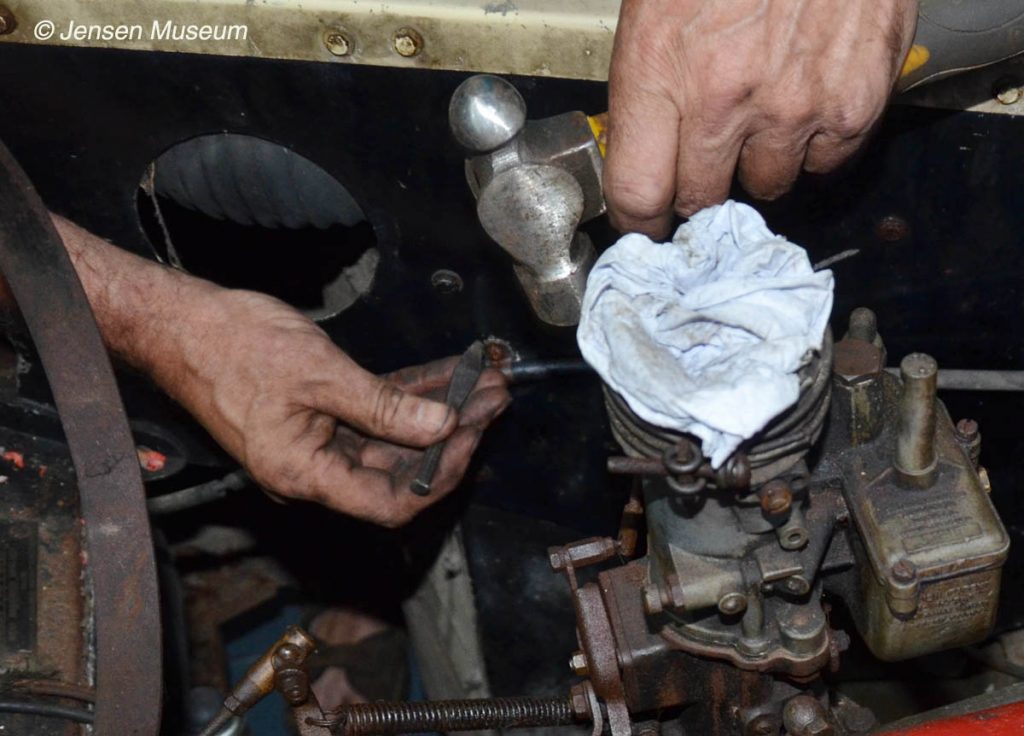 Unscrewing the clips holding the bonnet release cable. Typical of most fastenings on the car, the screws were rusted. The heads needed to be cleaned off to allow the screwdriver to get a proper fixing. Some ‘gentle’ tapping with a hammer, and Plusgas eventually released the screws. 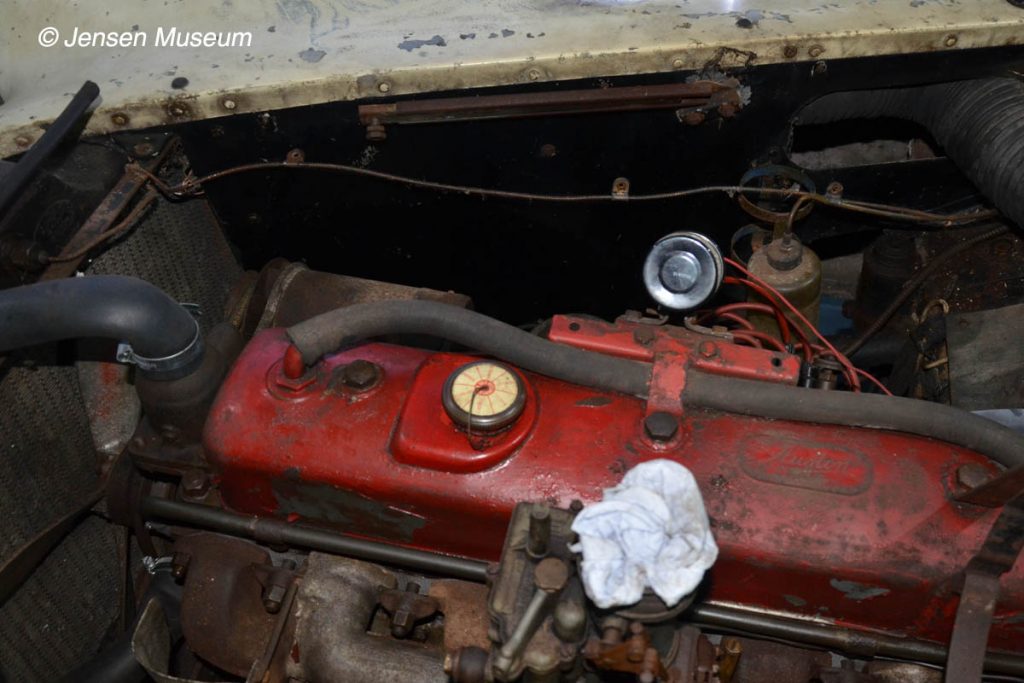 The temperature sensor cable needs to be unscrewed from the wall.

Lifting off the entire front body. One needs to come up horizontally first, so the radiator isn’t fouled, then one can move it completely off. The entire front body assembly isn’t actually that heavy, and two people can easily lift it off and position it in storage until it goes back on again. 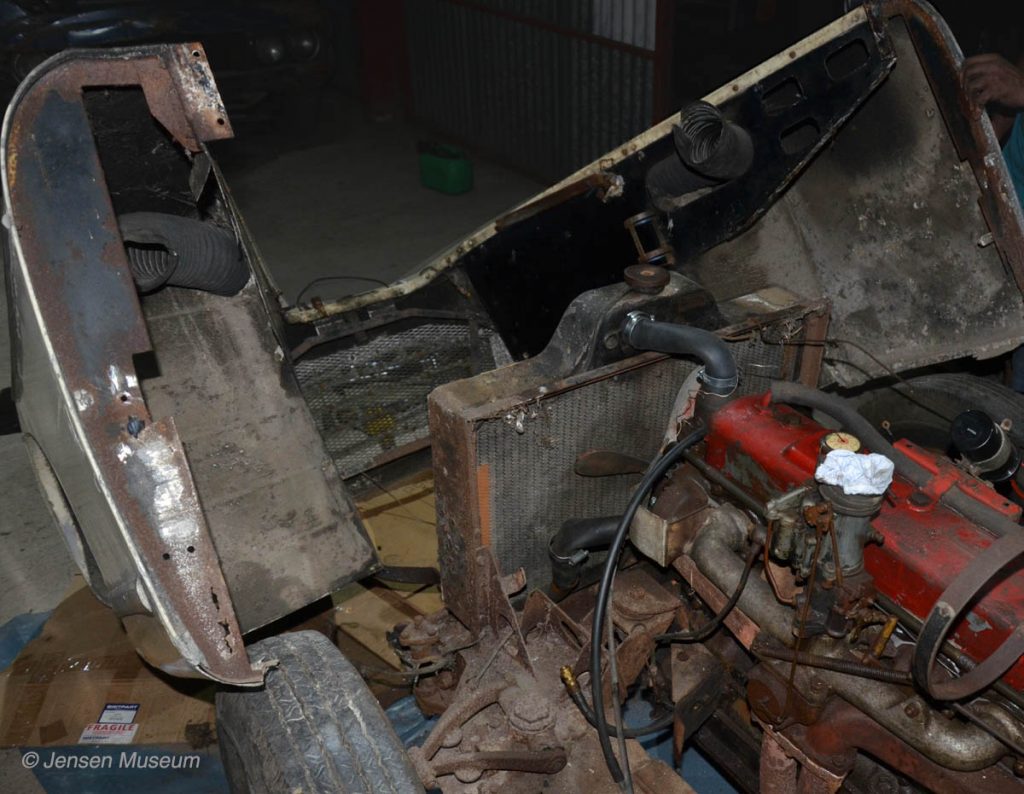 With the front body being removed, the fixings by the doors can be clearly seen. The two top holes are where the front body is attached to the bulkhead (step 4). Then there is a single bolt half way down, and two towards the bottom. 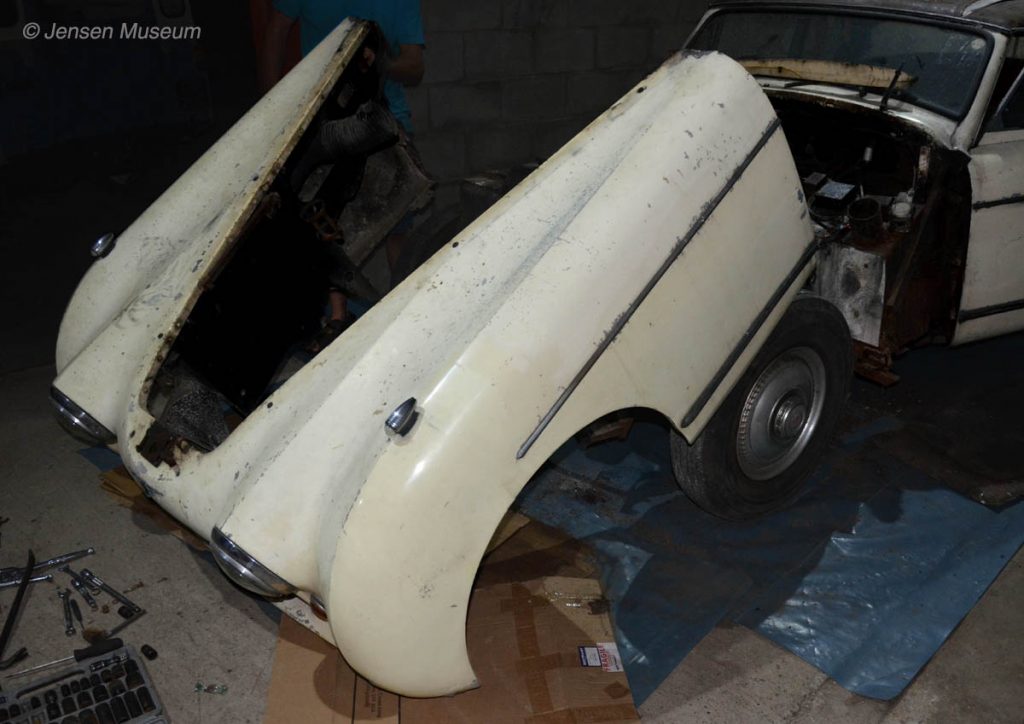 The front body free from the car. 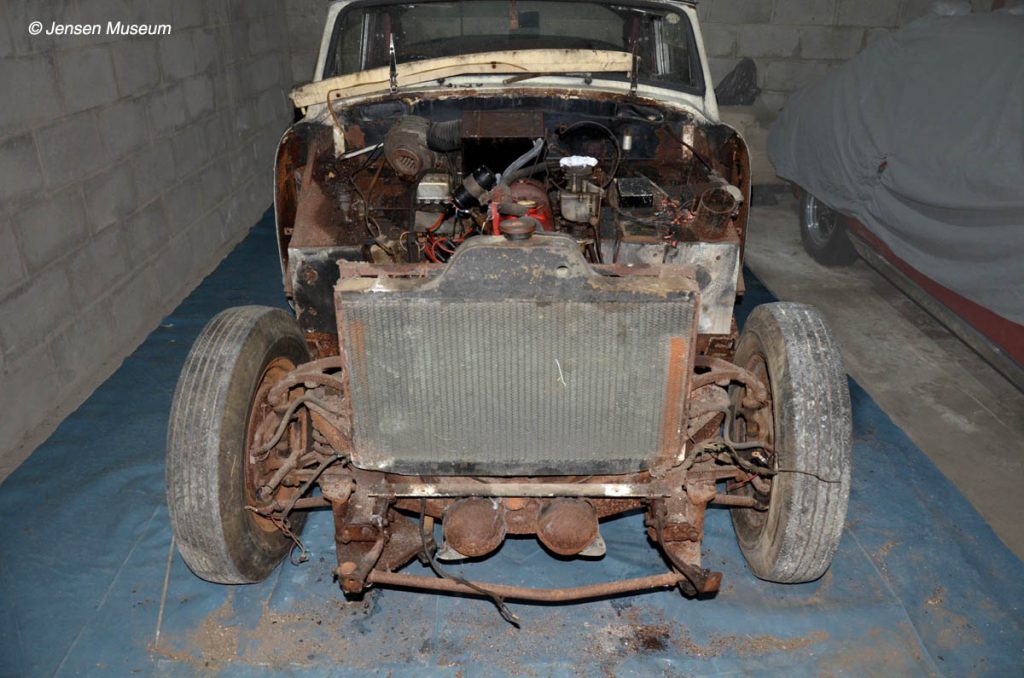 Early Interceptor specialist, Mick Barnett, told the Museum that the entire process from start to finish can be achieved in approximately 1 and 1/2  hours. But, that is for a vehicle in good condition, and where the procedure has already been achieved on previous times before. With the Museum Interceptor, nothing had fundamentally been touched since the vehicle was built in 1954. The complete procedure took the Museum 3 and 1/2 hours.